Sony executives have been deliberating over a price increase for some time, said people familiar with the discussions. A spokeswoman for Sony said the company is selling titles at launch for as little as $50 and the “biggest games" for $70. She said the higher price is “reflective of the growing development resources needed for these ambitious games.”

Game companies argue prices haven’t kept pace with the cost of other media like a movie ticket, Netflix or cable television, said Yoshio Osaki, the head of IDG Consulting Inc., which works with most major publishers. Since 2005, the cost to develop a game has tripled or quadrupled, he said.

“Not all publishers will launch next-gen games at $70,” Osaki wrote in an email. “However, we do anticipate that a growing percentage of games will launch at $70, but not all at once and not uniformly across every publisher or every game franchise.”

Capcom Co., the Japanese publisher of Resident Evil and Street Fighter, won’t release software for the new systems until next year. But like other companies, Capcom said it’s taking a “title-by-title” approach. “We believe game software’s price should be determined by how much money consumers are willing to pay for the quality, not by how much money we spend to make that game,” said Kenkichi Nomura, the chief financial officer.

This discussion of what the cost of computer game should be is missing a significant evolution of the market which has been going on for the last decade. Freemium is the biggest trend in the market where players have access to the game for free and pay of add-ons to speed up their progress or enhance the look of their online profile.

The success of Fortnite last year and Among Us this year is a testament to the spectacular ability of these games to capture the imagine of gamers. The challenge for conventional game developers is a player only has so much time. Spending $60 for limited fun over nothing for limitless social fun is tough sell and made more difficult by a $70 price tag.

Against that background, the evolution of the subscription business model is interesting. Google tried it last year and shelved the idea, not least because it is not a game developer in its own right. Microsoft appears likely to have better luck.

However, the big argument in the growth of Fortnite’s market was in whether Sony would allow cross play. Eventually Sony relented and allowed friends that owned different consoles to play together across platforms but it took a lot of market pushback. I do wonder whether the decision to raise prices is a testament to how much of a challenge the freemium model puts on conventional companies. 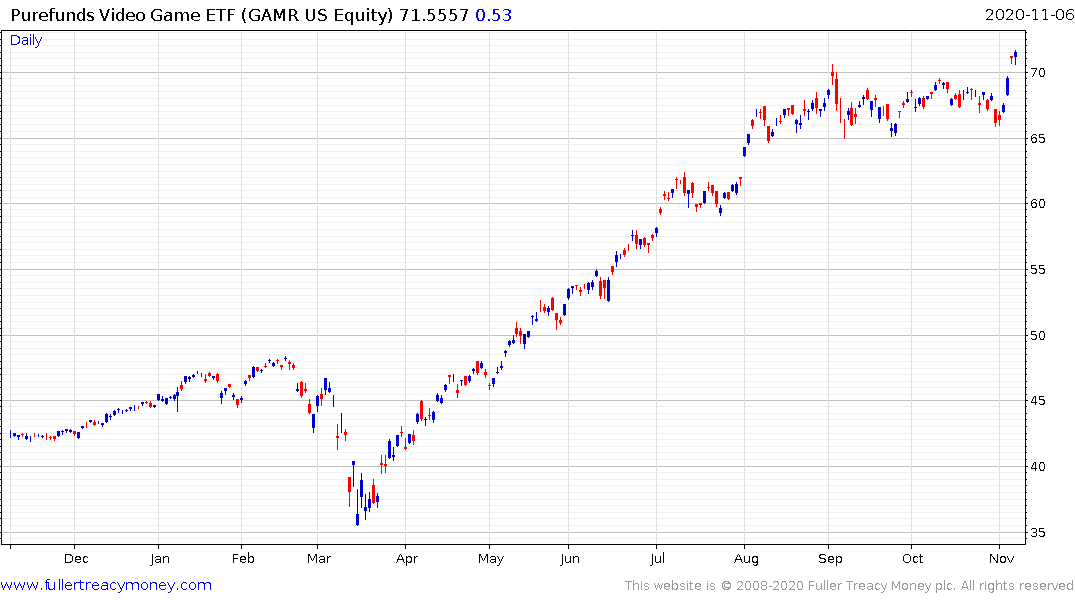 The Gaming ETF eased back today on weakness in the stay-at-home market. However, the sector is likely to succeed in holding much of the market share in young-people’s attention it has captured during the lockdowns.