Value Stocks Are in Position to Swamp Growth: Markets Live 2020
Comment of the Day

Value Stocks Are in Position to Swamp Growth: Markets Live 2020 by Eoin Treacy

* If you’re upbeat about value companies, which are cyclical in nature, then you’re probably optimistic about the global economy. The good news is central bankers are doing everything they can to help the economy get back on track

* Fidelity’s sector strategist Denise Chisholm favors cyclical stocks now that the Fed and ECB are cutting rates at the same time. “That has happened only about 10% of the time since the ECB’s inception in 1998, and when it has, the U.S. market has surged in the subsequent 12 months. Cyclical stocks have fared especially well under these conditions, outperforming the market 71% of the time.”

* Even a limited resolution to the U.S.-China trade conflict should help a global economic revival by reducing uncertainty. That should release animal spirits by boosting new orders for
machinery, industrial supplies and energy. All that would make the case for value stronger than it’s been in years

Sometimes there is a difference between cheap stocks and value stocks. For over a decade a torrent of liquidity hitting the market has rewarded risk taking and favoured growth at any cost. By comparison the slow and steady business models pursued by many classic value companies has appeared staid. The additional complication of technological obsolescence has resulted in companies with low P/Es and high dividends languishing because investors fear for their survival. 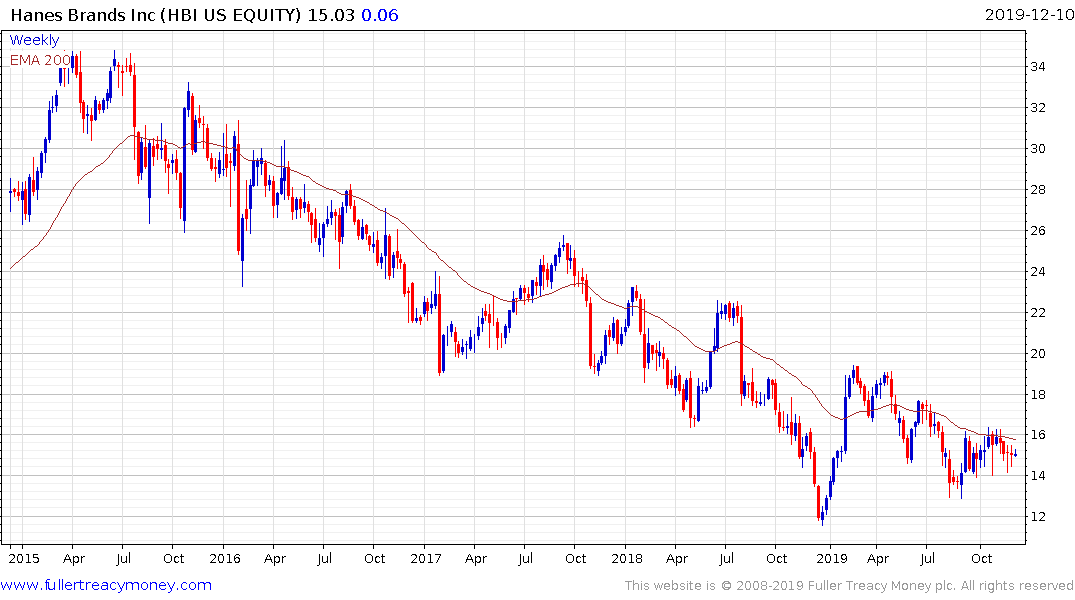 Hanesbrands (Est P/E 8.49, DY 4.01%) is a case in point where it has suffered significantly from the generic branding by companies like Amazon, Target and Costco. The share has at least paused in its downtrend but will need to break the sequence of lower rally highs to signal a return to demand dominance.

The market with the clearest value propositions today is the UK where the one-off surprise of Brexit and ensuing uncertainty has resulted in a valuation discount. 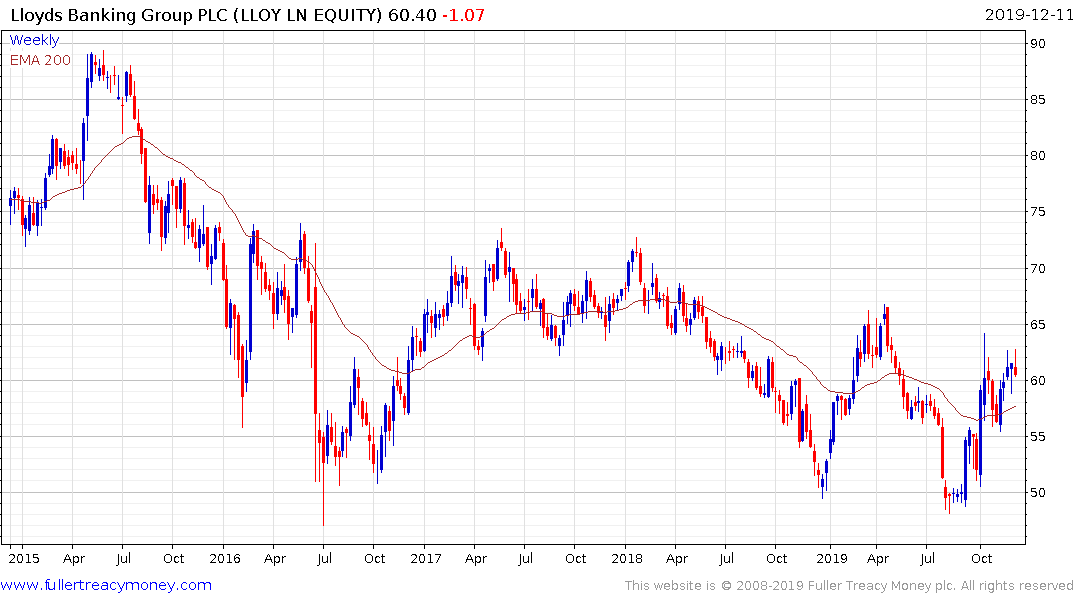 Lloyds (Est P/E 8.39 DY 5.4%) has been held by the uncertainty of fines from the PPI scandal but it is a pureplay on the UK economy and the share is steadying from its lows. 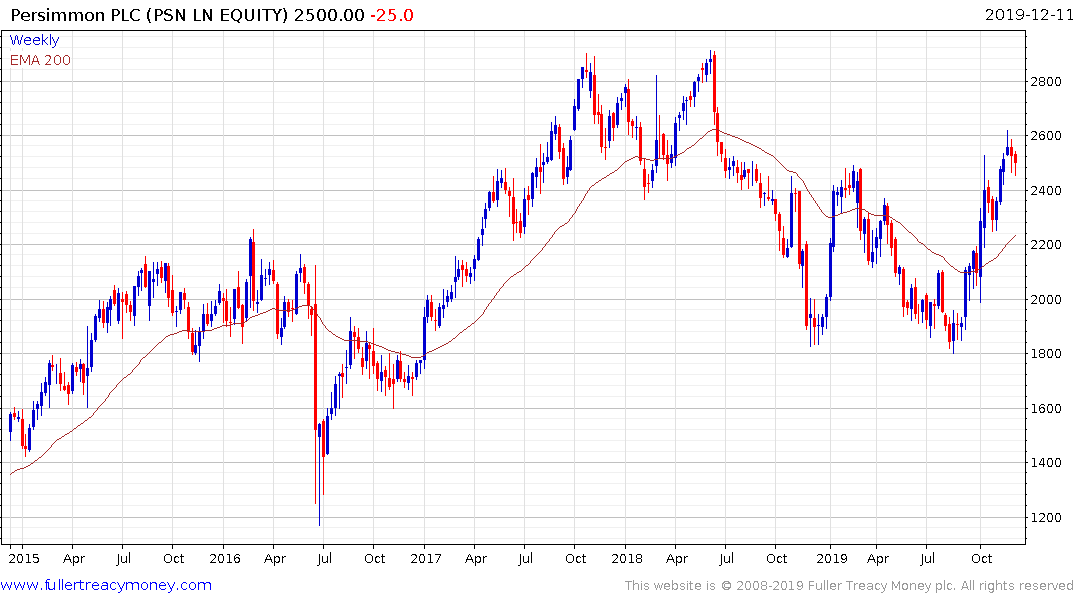 Persimmon (Est P/E 9.3, DY 9.4%) has rebounded impressively over the last few months to break its downtrend and while somewhat overbought in the short term, a sustained move below the trend mean would be required to question recovery potential. 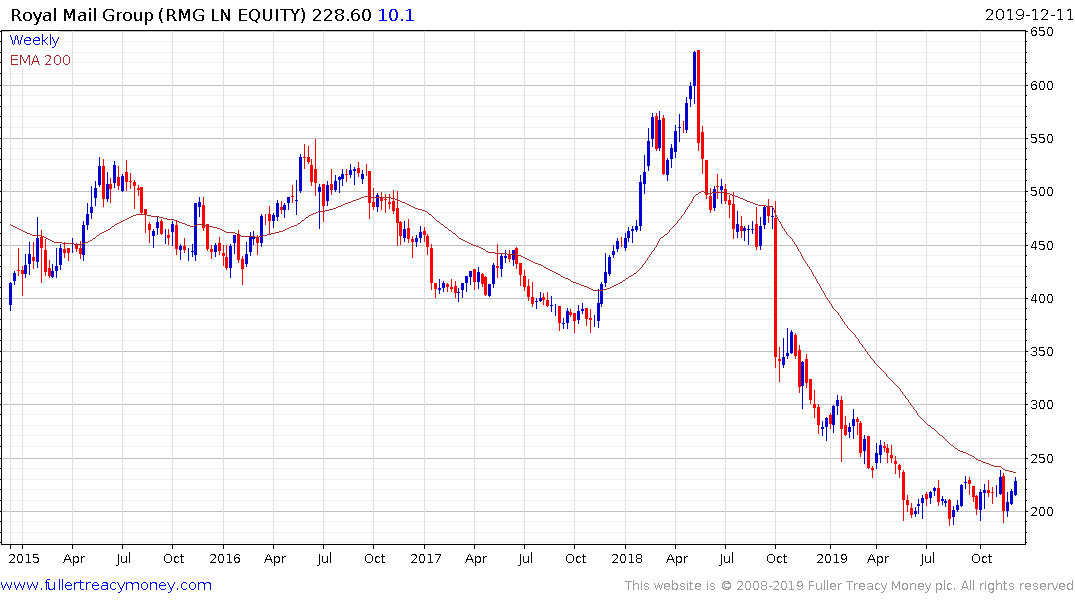 Royal Mail (Est P/E 10.68, DY 10.72%) is almost the antithesis of a growth company. The share has been ranging above 200p since May, following a yearlong downtrend. It is now trading back above its trend mean which suggests much of the bad news has been priced in. 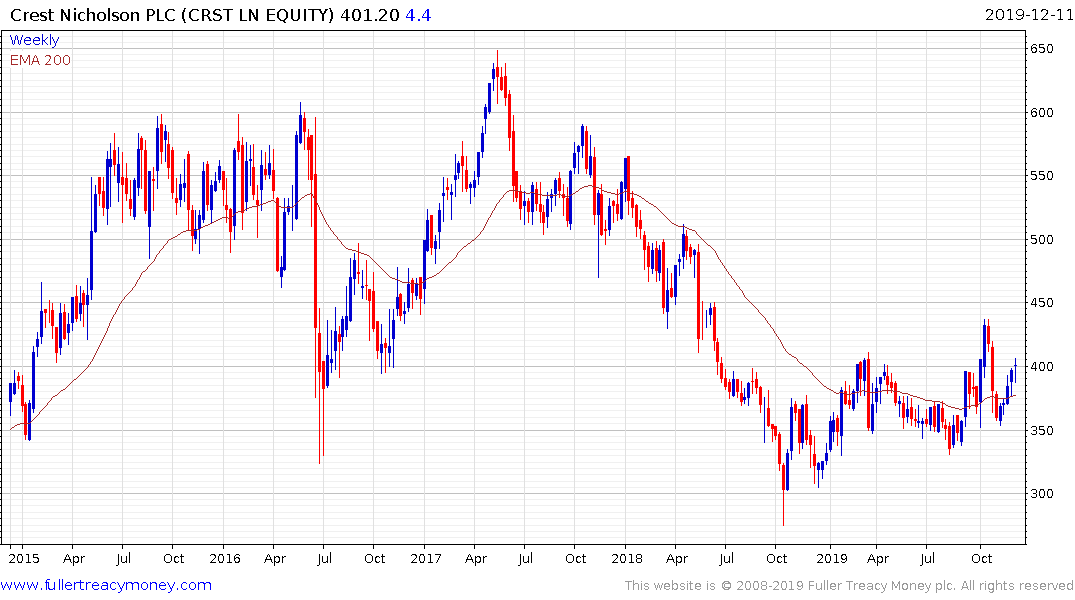