US Equity Strategy The 2015 Playbook
Comment of the Day

US Equity Strategy The 2015 Playbook by Eoin Treacy

Healthcare and Technology – Contrarian to be market-weight? While we are currently market-weight both, a lot of investors we spoke with recently are overweight at least one (or both of these groups). For healthcare, our assessment is that our call there was probably our best sector-level call in the last four years. We were overweight 2011-through December 1st of 2014, nearly four years, on a thesis that there would be a R&D pipeline re-rating in biotechnology and pharmaceuticals and that the medical distribution businesses would benefit from volumes and were growth at a reasonable price. Both played out, and our view is reducing the overweight in now prudent. We still hold a 4% position in MCK, and a 2% one in CAH, and select pharma and biotech, and we don’t view healthcare as a short, but valuations are now at ten-year highs on price-to-forward earnings in absolute terms, even if they remain compelling against other defensives like consumer staples.

?For technology, we struggle to implement a discipline where we want to own stocks that are recommended by our fundamental analysts and screen well in our disciplined strategies. Today, there is one technology stock, HPQ, that screens in the top quintile in both our 24-month model, BEST, and our 3-month alpha model, MOST, that is recommended by a fundamental analyst at Morgan Stanley. Hard to get 20% weight in technology!

Utilities: While we appreciate that this sector is very idiosyncratic, and we wouldn’t be surprised if the 10-year yield went lower in the next few months (we have not studied this like the US equity market multiple but wouldn’t be at all surprised if this was also un-forecastable in short horizons), we just can’t recommend a sector that is the most expensive vs. its own history it has ever been and trades at a premium to the overall market. Given the S&P500 benchmark weight is only 3%, we don’t think the bet is that significant either way, but midcap value investors have to make up their minds to avoid valuation if they want to own even the benchweight in this group.

All 9 of the major SPDR S&P sector indices can be found in the USA indices section of the Chart Library (at the bottom of the third column). It’s worth clicking through them because what quickly becomes apparent is that while energy and materials have lost consistency the rest are still trending reasonably consistently.

Healthcare, technology and utilities have been among the best performing stock market sectors over the last 12 months. They share a common characteristic of generally strong balance sheets and improving consumer finances.

The stock market recovery is approaching a sixth consecutive year of gains from the 2009 lows. One might argue whether valuations are reasonable but it would be hard to argue they are cheap. This is hardly surprising considering the stock market has risen 200% since 2009. We have described the environment as liquidity fuelled for a number of years and this is no less true today. In addition to monitoring the stock market’s consistency, the global liquidity situation is equally important and the Fed’s actions are being watched as never before. It is now also important to consider the potential for a reversal of the Dollar carry trade as Eurozone, Japanese and Chinese monetary policy eases. This could act as a continued tailwind for Wall Street in the event that the Fed is no longer easing.~ 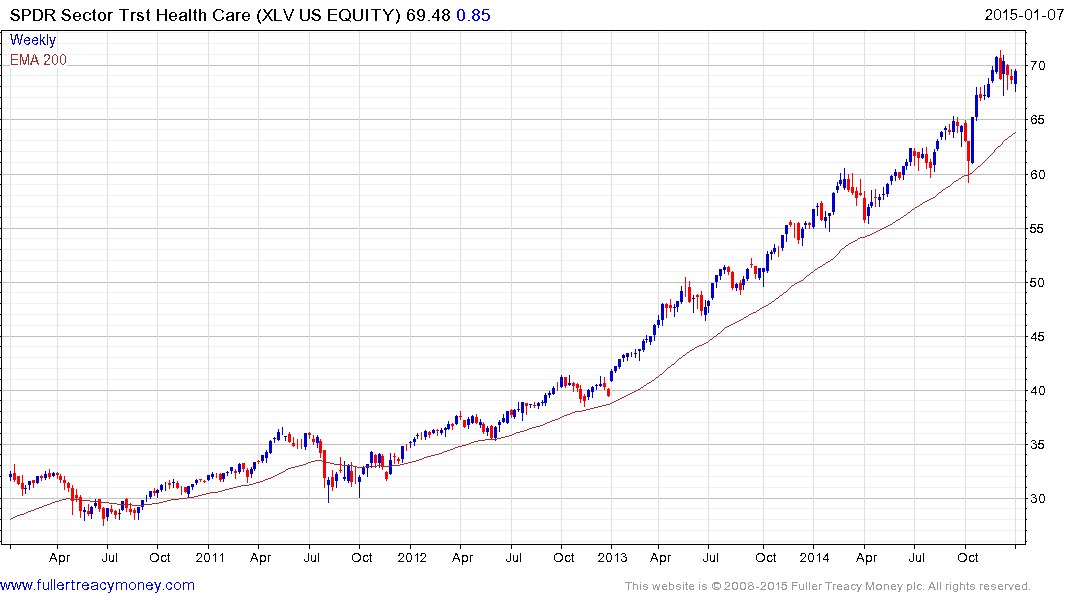 The Healthcare SPDR remains somewhat overextended relative to the 200-day MA. However, a sustained move below the 200-day MA, currently near $64, would be required to begin to question medium-term upside potential. 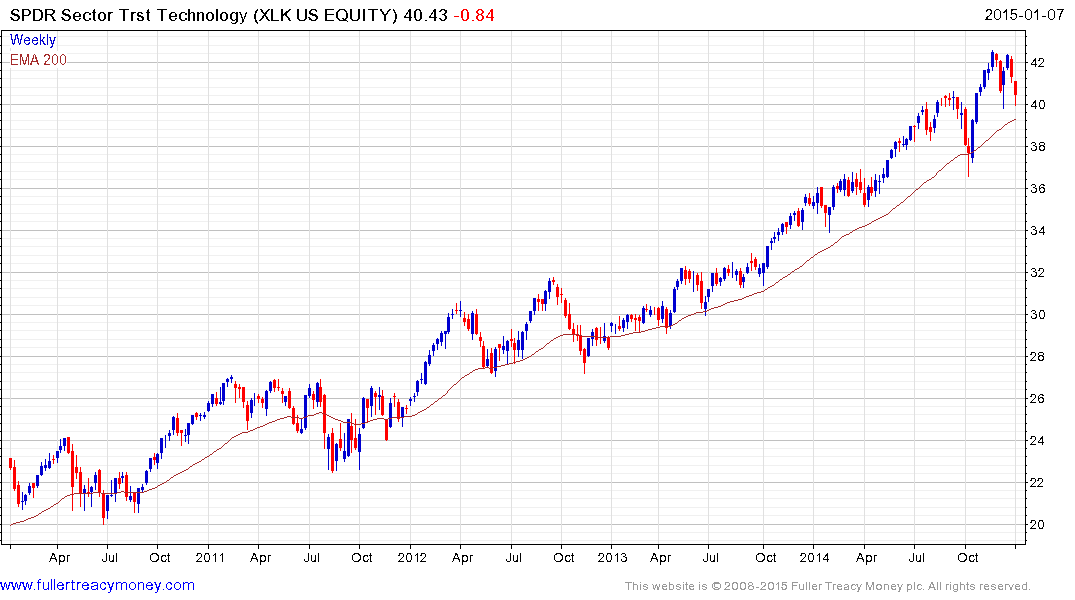 The Technology SPDR has already unwound most of its overextension relative to the MA and will need to find support in the $36 - $39 area if medium-term upside is to continue to be given the benefit of the doubt. 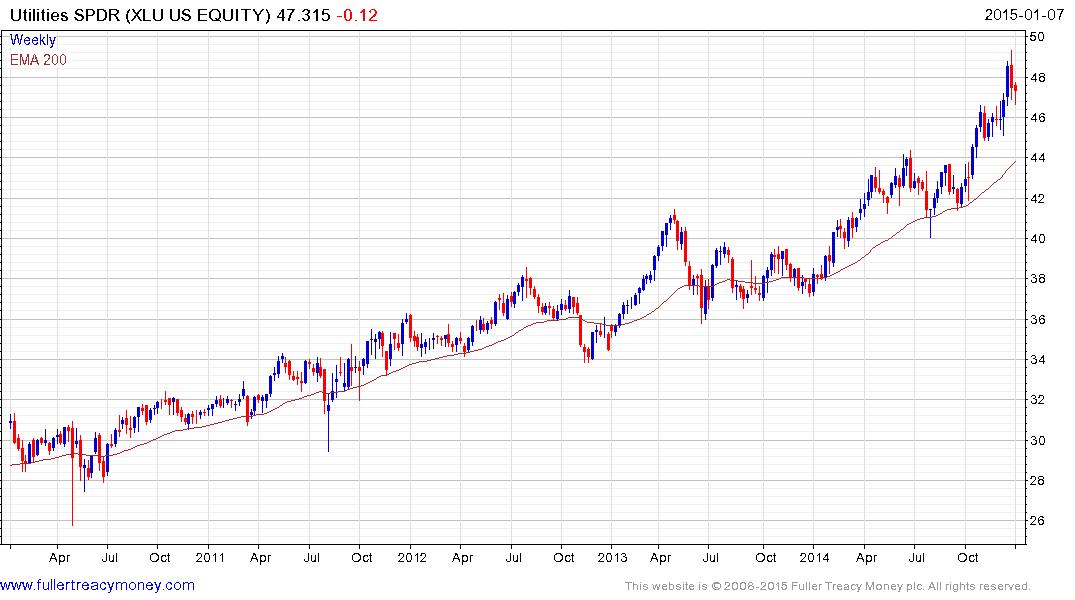 The Utilities SPDR is at least as overextended relative to the 200-day MA as at any time in the last five years so potential for a reversion back down to the mean has increased.