US Equity Strategy by Eoin Treacy

We prefer Value over Growth; Value outperformed Growth in October’s sell off. We think that was the beginning of a longer lasting leadership change.

Third quarter earnings results have been strong; we think this quarter will likely represent a peak in year over year earnings growth. The fourth quarter will get much harder as we lap numbers that received a boost from hurricane and tax reform related spending.

The rotation out of highly interest rate sensitive sectors and into dividend growth companies remains a significant factor in this market. The underperformance of the extended FANG sector is a significant issue because just about all of its constituents have lost uptrend consistency and, as a group, they represent significant weightings in the major stock market indices. 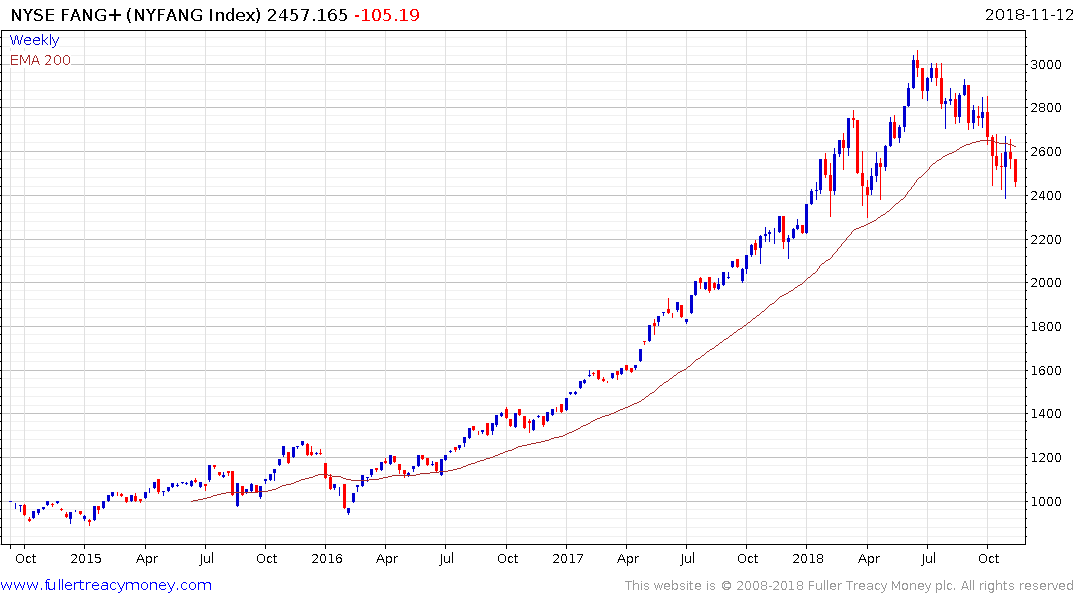 The NYSE FANG+ Index has been trading below its trend mean for six weeks and needs to sustain a move back above it to question the supply dominated environment. 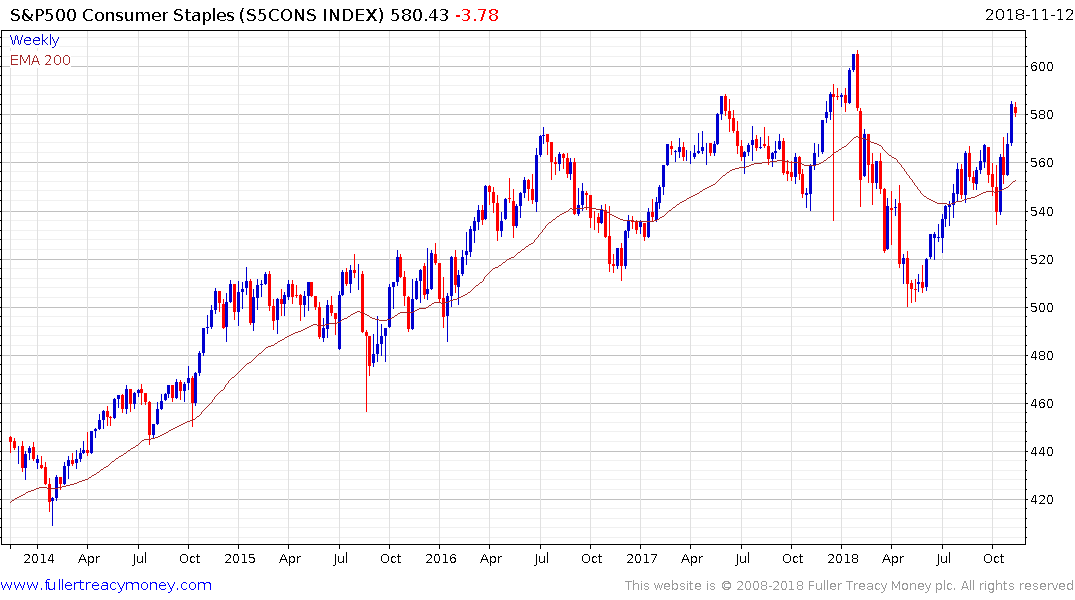 The S&P500 Consumer Staples Index rebounded following its failed downside break earlier this year and is now testing the upper side of its range. A short-term overbought condition is evident suggesting there is scope for some consolidation but a sustained move below 550 would be required to question potential for continued higher to lateral ranging. 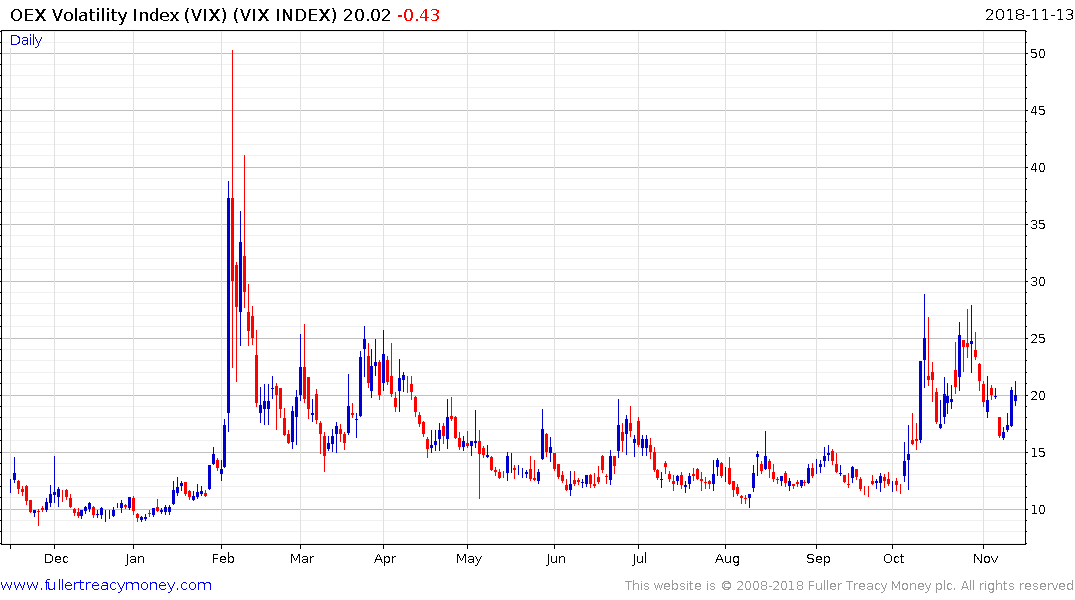 The VIX Index has first step above the base characteristics suggesting the is scope for some additional upside so we can anticipate more volatility. I received this email from a subscriber last night:

Dear Eoin, would you have an explanation for Goldman Sachs going down approx 7 pct? I see the rotation you mentioned but still Nvidia going down aprox 7 pct is pretty extreme kind regards 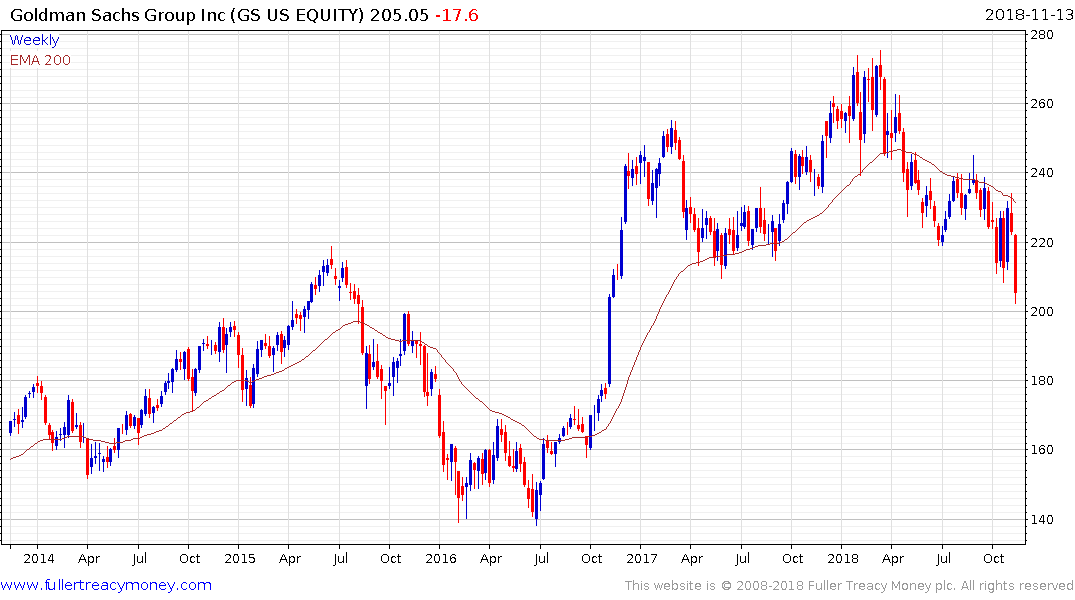 Goldman Sachs has been trending lower all year, not least because of how involved senior management were in the 1MDB scandal in Malaysia. That particular revelation over the weekend probably to blame for the share’s underperformance yesterday. 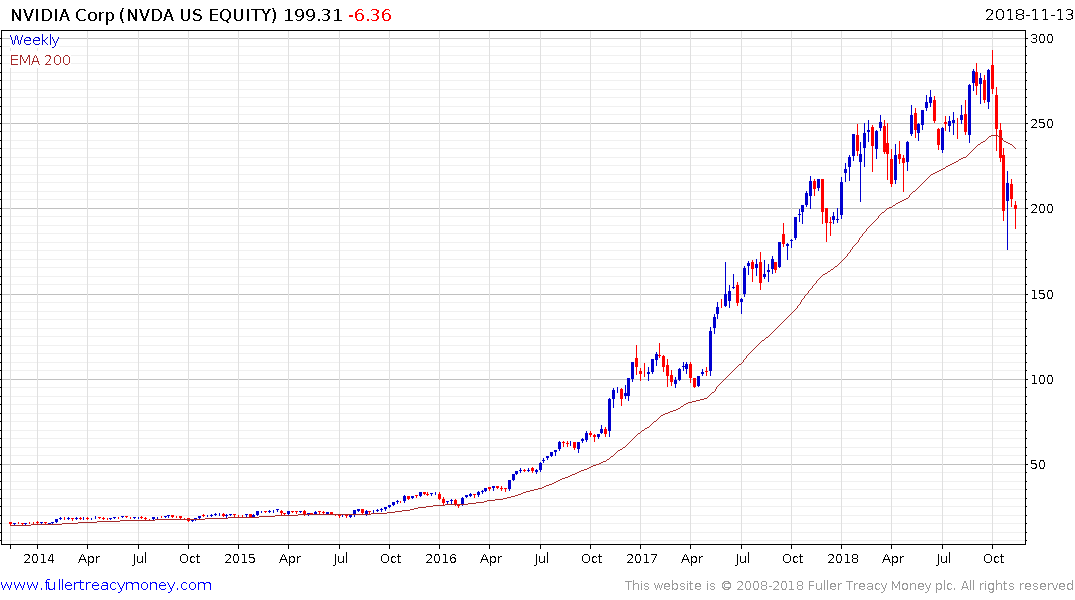 Nvidia on the other hand is at the centre of the troubles assailing the semiconductor sector, which continue to roll through following the breaking of the China supply chain interdiction story in early October. This is a situation that is not going to get better in a hurry and represents a potentially massive cost to semiconductor companies if they have to migrate production out of China. As a major constituent of the Philadelphia Semiconductors Index it is contributing to the sectors completing Type-2 top formation completion characteristics. Nevertheless, Type-2 massive reactions against the prevailing trend are often followed by ranges and we may now be seeing the beginning of a distribution in Nvidia.

The much bigger question that we do not yet have answer to is what is Jerome Powell thinking. The market tends to manufacture crises to test the mettle of new Fed Governors and we have yet to see evidence of a Powell Put. That is the big unknown. Meanwhile China is beginning to loosen its fiscal policy and so is Europe. Those are the first signs of government support coming in for a global economy where growth has been slowing. Investors are likely waiting for the catalyst of assistance from the Fed before becoming looking at this setback as a clear buying opportunity.