Here is a link to the full report and a section from it:

We forecast a range-bound equity market in 2019, as we did in 2018, and with the same upside (3,000) and downside (2,400) parameters. The difference is that we began this year at the low end, while 2018 started closer to the midpoint. Last year was defined by exceptional earnings strength, offset by peaking growth and tightening financial conditions (i.e., "Don't Fight the Fed"). We continue to think this year will be defined by an earnings recession, with uncertainty on trough levels and timing, offset by a Fed that pauses its tightening stance and a bottoming global economy led by China. In this environment, volatility is likely to flare episodically, creating big swings once again even though that hasn't been the case so far. As such, we think it's important to be disciplined on price when considering risk-reward, particularly as idiosyncratic risk becomes the dominant driver of stock prices as opposed to beta. For a more complete summary of our current equity market outlook, we direct readers to last week's publication.

Since last week, there have been multiple signs of progress on US-China trade talks. Expectations are now for a deal to be signed by Presidents Trump and Xi in mid-March. While full details are unavailable, there have been reports that China has agreed to buy up to $1.2T of exports from the US over 6 years, a 50 percent annual increase from last year's $130B of US goods bought by China. National Economic Council Director Larry Kudlow has indicated that China will commit to reducing subsidies to state-owned enterprises (SOEs) and disclose when the PBoC engages in FX market intervention. Intellectual property protection remains an open question along with the existing 10 percent tariffs on China goods enacted by the US in October. Relative to where we were in December, this does appear to be progress. It remains to be seen how much of this agreement has already been priced by markets and what will be the immediate impact on corporate behavior and earnings.

The bottom line for us is that we have a hard time getting incrementally bullish on a trade deal from here. First, valuations are now back to the high end of our ERP/Interest Rate Matrix (Exhibit 1) at 16.4x consensus forward 12 months EPS of $171. If we use our lower EPS forecast of $165, the S&P 500 is currently trading at 17x. In short, there is a lot of good news priced in at this point, which is mostly a function of the Fed's dovish pivot, positioning, and hope around a trade deal and China stimulus.

Morgan Stanley were very clear about their view the market was topping last year and to expect earnings growth to fail to keep up with the pace posted over the previous year. So far, that has played out with corporate earnings growth moderating. However, the absolute level of earnings has been quite steady. Therefore, it is possible to make a case for reacceleration particularly if the twin tailwinds of easing trade tensions and ample liquidity gain traction. 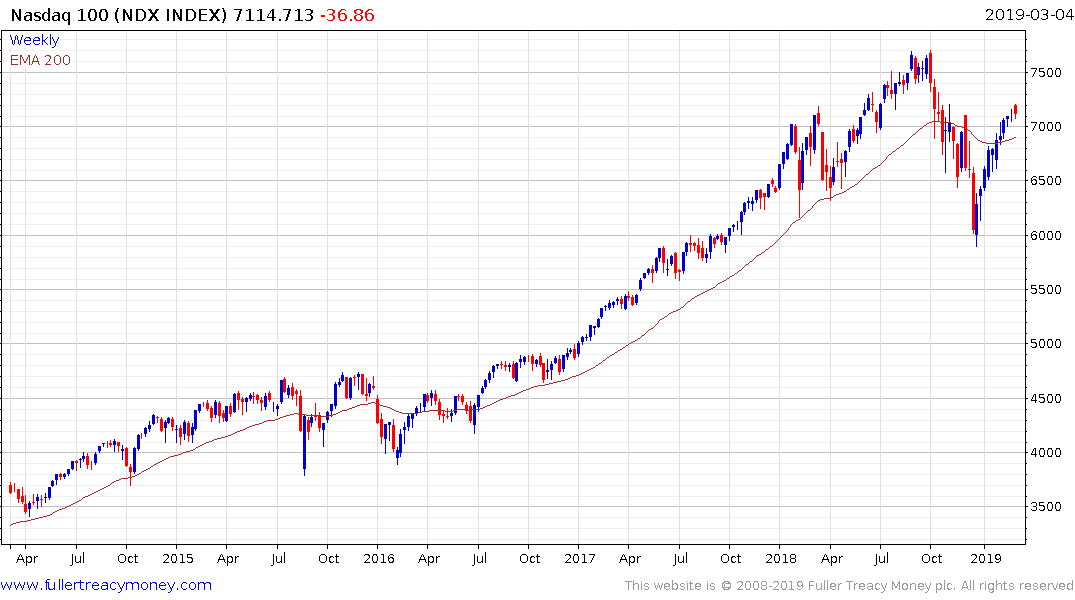 While the majority of people pay attention to the S&P500, the relative performance of the Nasdaq-100 is probably more important. It hit a new high within weeks of the initial January pullback before posting a higher reaction low in March. It then moved to a new all-time high, which it sustained for a few months, before pulling back and exceeding the February low. It has now rallied to break the short-term sequence of lower rally highs. Today’s pullback suggests at least a pause. Downside follow through tomorrow would confirm the signal. 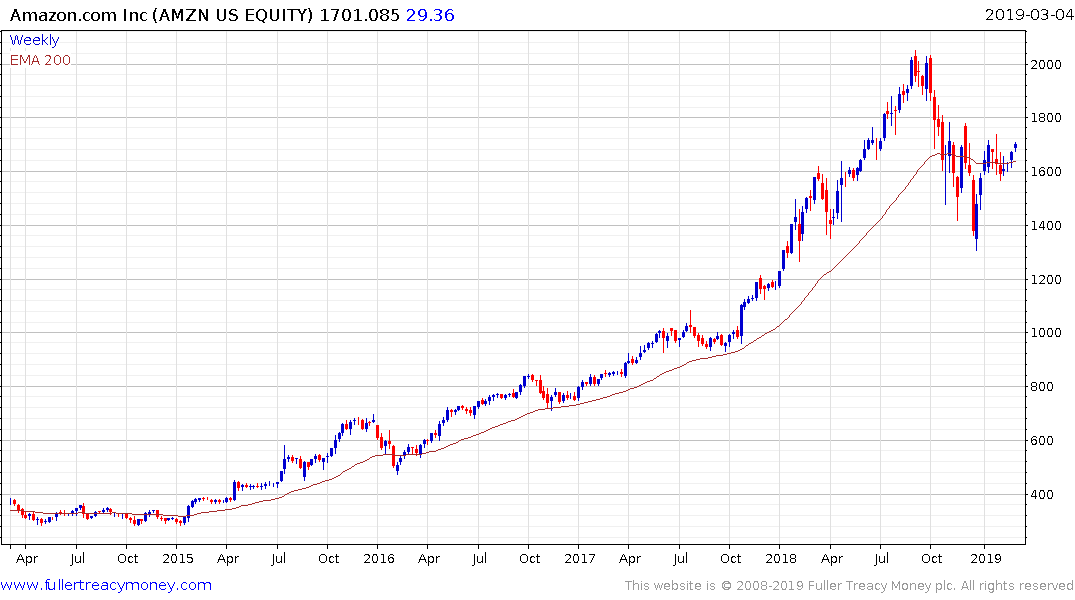 Importantly Amazon, which is both a mega-cap company but also reliant on the health of the global consumer, has firmed from the region of the trend mean and a break below $1550 would be required to question potential for additional upside.

The rebound seen from the Boxing Day lows has been very impressive. The potential for a global reflation trade is now being priced in and will gain further traction if the US/China trade war ends and if China stimulates its economy. Meanwhile the challenges central banks are encountering with raising rates is clearly stimulative, particularly if they are encouraged to reignite easing without the imminent threat of a recession.