The US-China trade war is disrupting the electronics supply chain, which is centered on China and many of the Northeast Asian economies. PMIs are coming off for Korea, Taiwan and Singapore, key electronic producers in the supply chain. Electronics exports around the region are also slowing. For ASEAN (excl. Spore), the electronics-related data is somewhat mixed, with softer exports but tentative signs of higher orders and investment.

Some of ASEAN’s exports in products targeted by US-China tariffs are performing strongly, including Indonesia’s and Malaysia’s mineral products. There are also visible signs of greater FDI into ASEAN, particularly Vietnam, Thailand and Malaysia, as firms adopt a more flexible production network outside China to circumvent the tariffs. FDI into manufacturing for these countries has picked up significantly in the past two quarters.

US businesses have been frontloading their purchases both to stock up for the holidays and to avoid tariffs. That inventory build is flattering import figures but says little about the potential for demand next year.

It is hardly a coincidence that Bloomberg broke the supply chain infiltration story now, three years after the events it recounts transpired. There are serious efforts underway to discredit it but the damage is done. The message is clear that the geopolitical priority of the USA is no longer to afford China the privilege of acquiring technology from the West and to grow wealthy from being the technology workshop of the world. There is going to be an expensive relocation program over the next few years as well as a concerted effort by China to become fully independent technologically.

The Trump administration appears willing to accept that toll because they believe it is the only way to blunt the growing intention by the Chinese administration to act as a competitor to the USA. 25% tariffs are either going to necessitate price rises or tighter margins and since every company is going to be in the same boat they are likely to use this as an opportunity to raise prices and potentially improve margins at the same time.

That’s what might be considered a best-case scenario and is dependent on continued robust economic growth in the USA. The additional tax cut floated over the last few days is not simply a vote buying exercise but an effort to promote economic growth to counter tariffs. That’s the basis for an inflationary outcome and there is evidence of the tight labour market delivering price pressures. However, that is something the Fed will likely feel compelled to combat with higher interest rates which could be a facilitating factor in the next recession. 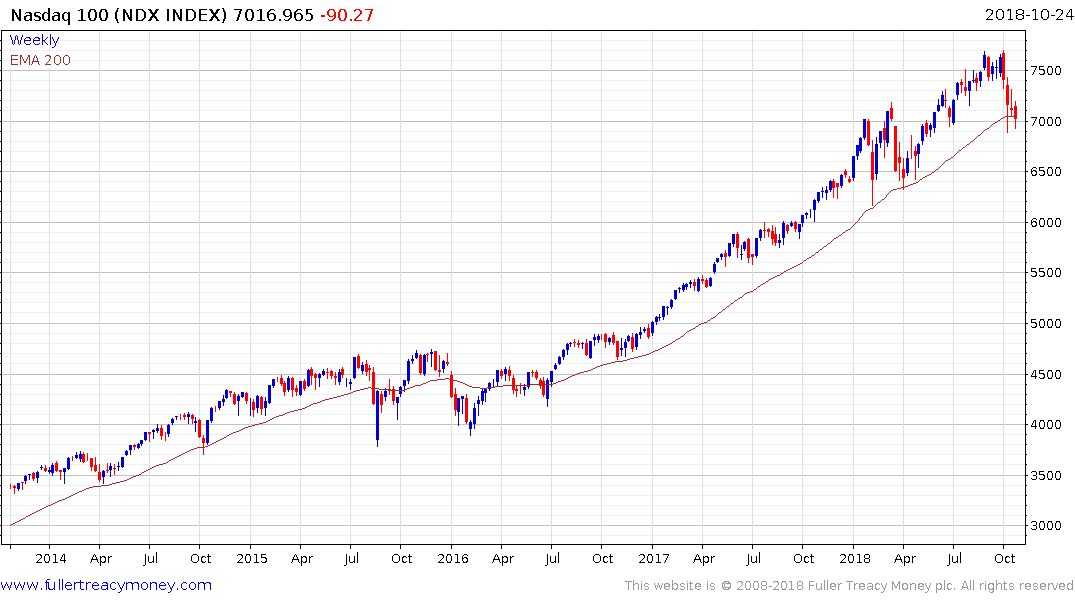 Major indices like the Nasdaq-100 are currently trading in the region of the trend mean while both Europe and China are experiencing clear supply dominance. There have been reports over the last few days highlighting the fact that emerging markets are cheaper relative to the developed markets than at any time in decades. That is a signal that we need to be aware of individual stories evolving like the improving situation in Brazil rather than succumbing to tunnel vision on the situation in China.