US and India versus the World
Comment of the Day

US and India versus the World by Eoin Treacy

Here is a link to the full note and here is s section from it:

A deeper look into emerging markets shows that one of its brightest growth stories also seems to be one of the most contrarian. India has suffered outflows from US retail investors even as they plow money into countries with slower growth rates, more debt, weaker currencies and less-robust rules of law.

It is interesting that India has not been favored as much as China or emerging markets more broadly, given its historical equity performance. India was one of the few major economies not to experience a drastic decline in its stock market in 2018. In local currency terms, it finished the year up 1%, compared to China and EM declining 19% and 14%, respectively.(5) Now, India has underperformed year-to-date as China and EM recover from their massive drawdowns. But the long-term track record is clear: India has outperformed China and EM consistently throughout this cycle (see chart).

We acknowledge that access to India is still rather nascent. The market capitalization of its listed domestic companies is only $2.3 trillion, about a quarter the size of China’s market cap and only 7% of the $32 trillion in US market cap.(6) For comparison, that’s smaller than the current combined market cap of just the three largest US stocks: Microsoft, Apple and Amazon.(7) Consider also that there are fewer than 300 India-focused funds worldwide (i.e., domiciled elsewhere than India), and over 850 China-focused funds worldwide (i.e., domiciled elsewhere than China.)(8)

India has both the institutional framework and demographics to support a much larger market economy. What it needs is deregulation, anti-corruption measures and better infrastructure. The challenge, for whatever party wins the election, will be how to employ the millions of new workers entering the economy every year for the next couple of decades. The urgency of that issue is likely to spur rapid economic development. 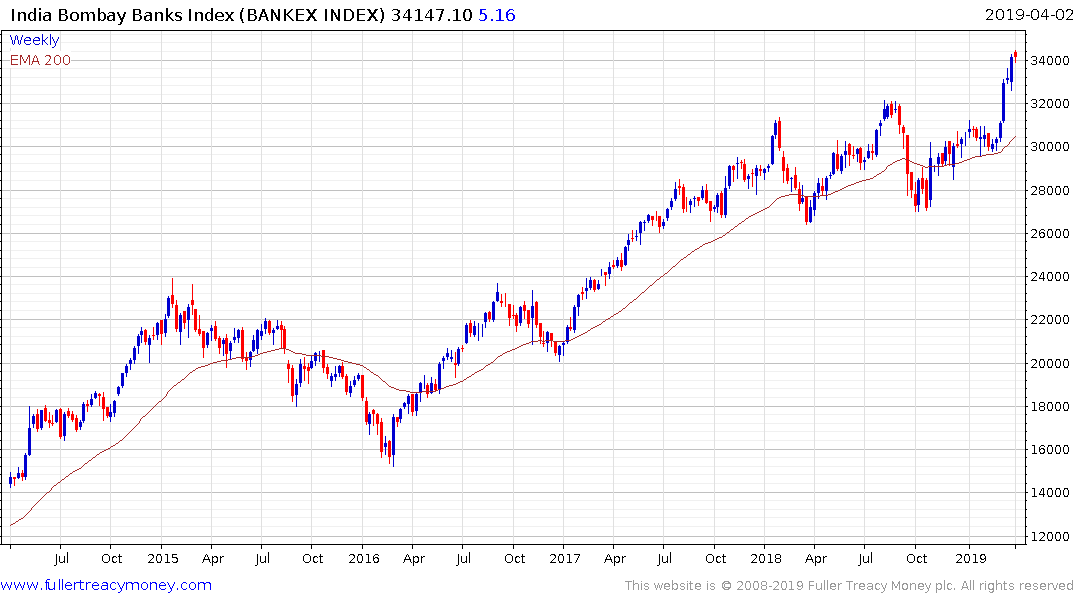 The Bombay Banks Index is the only banking sector in the world hitting new all-time highs which is supportive credit growth, not least as the Modi administration attempts to curry favour with voters 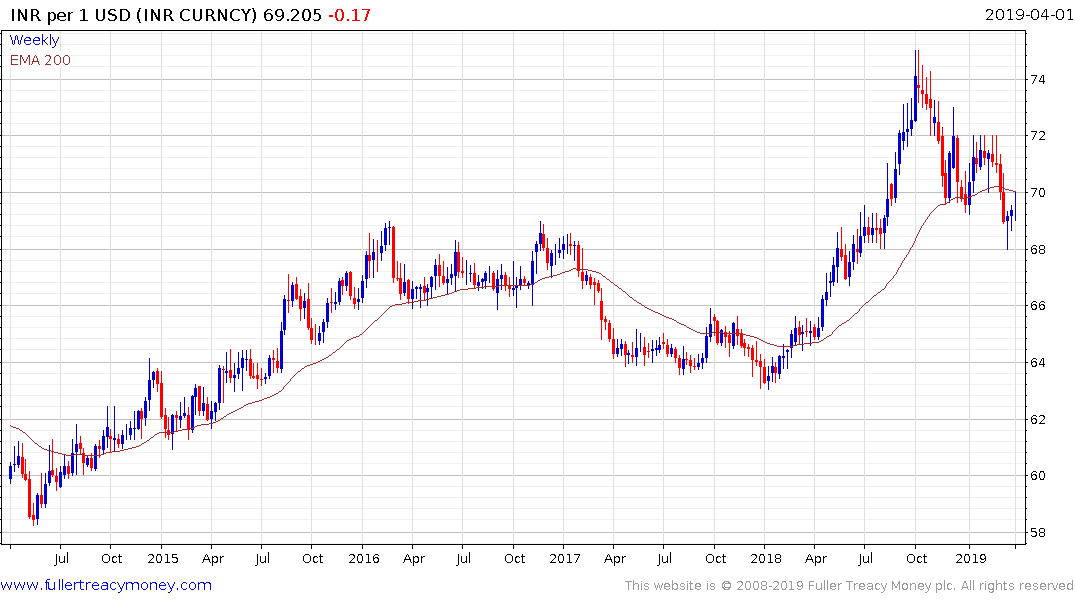 The Rupee firmed today as it continues to hold the move above the trend mean. 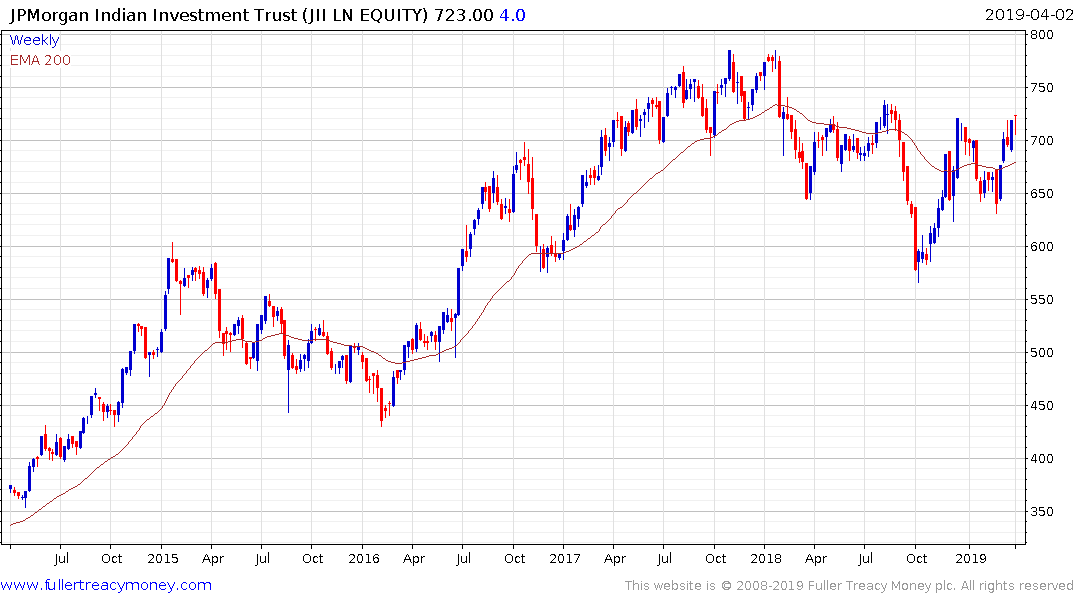 The JPMorgan India Trust (JII) is trading at a discount to NAV of 10.39% and is currently testing the 15-month sequence of lower rally highs. 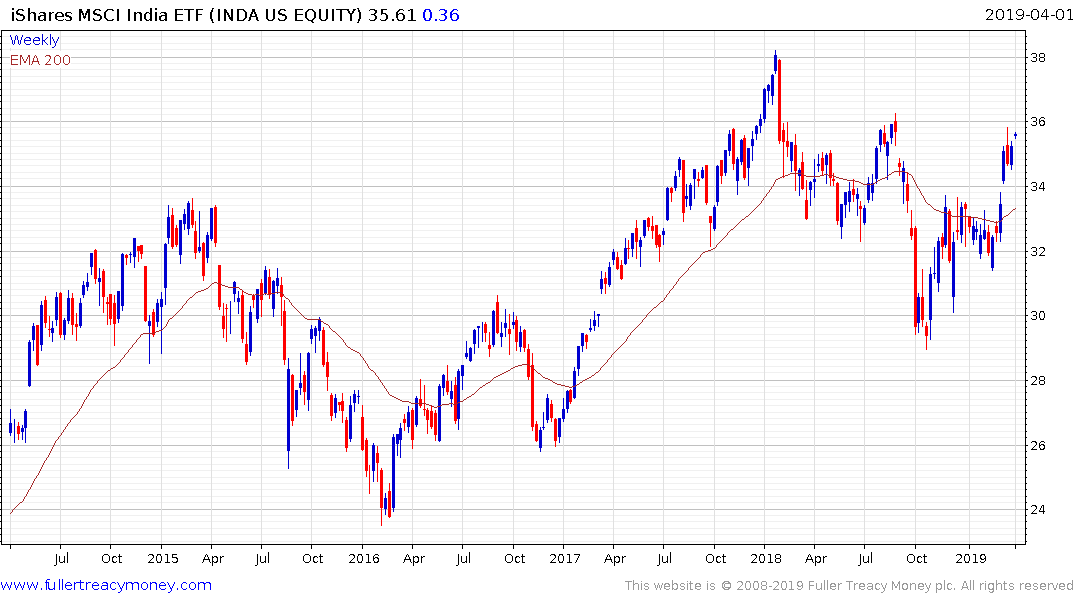 The iShares India ETF has rallied over the last month to test the region of the August peak and a sustained move below the trend mean would be required to question recovery potential.