“I see a decline in the euro given the ECB is more likely to ease,” said Toshiya Yamauchi, a senior analyst in Tokyo at Ueda Harlow Ltd. “Unless there’s additional easing, inflation will continue to slow.”

Consumer prices rose an annual 0.8 percent in January, the European Union’s statistics office said today. While that exceeds the initial Jan. 31 estimate of 0.7 percent, it remains below the ECB’s 2 percent target. Gains in prices dropped to 0.7 percent this month, according to the median estimate of economists in a Bloomberg survey.

“The market will be thinking increasingly about the ECB next week,” said Gavin Friend, a foreign-exchange strategist at National Australia Bank Ltd. in London. Comments from policy makers “seem to suggest that something could happen. I wonder whether, under that basis, the euro is going to struggle to hold gains,” he said.

While the ECB has taken on a great many additional responsibilities, its core mandate remains to control inflationary pressures. The decision to address the periphery’s sovereign debt and Eurozone’s banking crisis by forcing fiscal consolidation has had the anticipated side effect of fostering deflation. However the fact that the ECB has also been reducing the size of its balance sheet, from the peak reached in 2012, is an additional reason inflationary pressures are not stronger.

I had previously been looking for a chart of the ECB’s balance sheet and a delegate at the Singapore venue for The Chart Seminar kindly shared this chart with me which had recently been added by Bloomberg. It can now be found in the Chart Library. 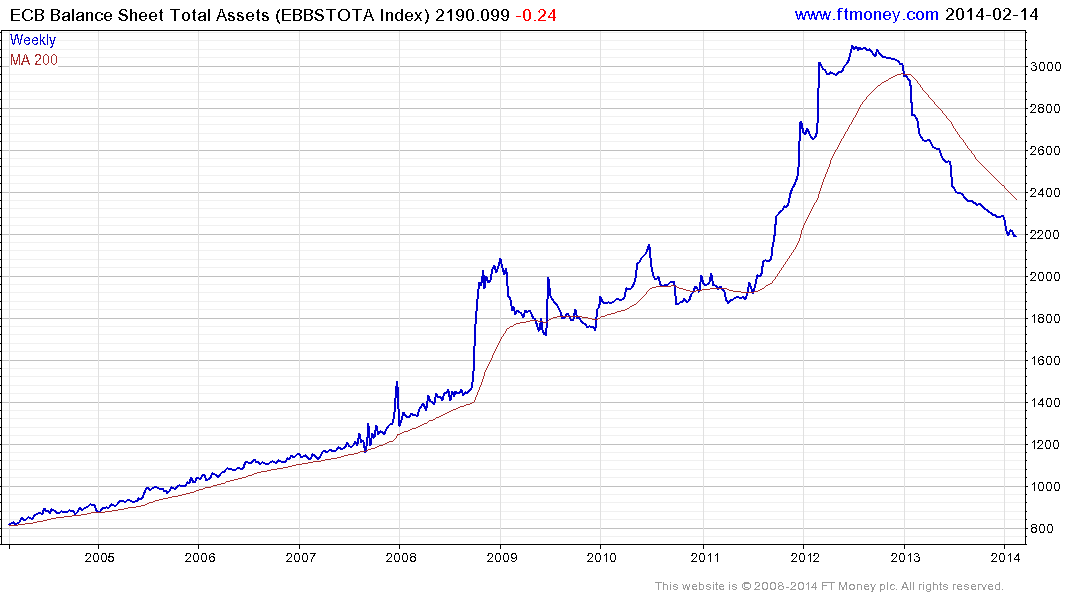 This chart clearly demonstrates that despite the fact abundant liquidity is being made available to the banking sector, the ECB is sanitising these cash infusions by withdrawing liquidity elsewhere. The management of the ECB’s balance sheet would suggest that while no country is willing to tolerate a strong currency for very long, the ECB does not want the Euro to be the weakest currency either. The Euro has rallied over the last few months to test the $1.40 area and a sustained move below the 200-day MA would be required to confirm supply dominance in this area.

I posted a number of charts of Eurozone shares with base formation completion characteristics in Comment of the Day on February 14th.

While investors have generally been worried about currency market fluctuations, not least regarding emerging markets, the ECB’s record suggests that despite short-term gyrations, they intend to ensure confidence in the currency which suggests a devaluation is unlikely.