Uranium, the commodity used to fuel nuclear power plants, has surged to the highest level since 2015 due in part to a single fund aggressively cornering the physical market.

Investment firm Sprott Inc. earlier this year launched its Physical Uranium Trust and recently commented on Twitter about how much physical uranium it had been buying, aiding to the commodity’s recent bull run. Sprott has amassed over 24 million pounds of uranium, sometimes buying more than 500,000 pounds in a single day, according to its website and social media account.

For comparison, total spot volume for 2020 was 92.2 million pounds, according to uranium investor Yellow Cake Plc.

The buying is in addition to already bullish fundamentals. Uranium prices must rise further to spur the restart of production to meet uncovered utility demand after 2023, according to analysts at Raymond James Financial Inc. Earlier this year, NAC Kazatomprom JSC, the world’s top miner of uranium, said it would keep its output at reduced levels through 2023, removing supply from the market.

Uranium has languished for a decade because Kazatomprom flooded the market with supply in an effort to capture market share. That policy created the odd situation where major producers like Cameco could buy spot production cheaper than mine it themselves; to supply long-term contractual obligations. A new bull market was not going to be possible until that supply surfeit was worked off.

The introduction of funds buying up supply, in size, and withholding it from the market is a significant catalyst for uranium prices. Uranium futures are particularly illiquid and the only contract with open interest at present is the front month. I’ve updated the chart in the Chart Library to reflect that reality. The price completed a first step above the base on Friday and continues to improve on that performance. 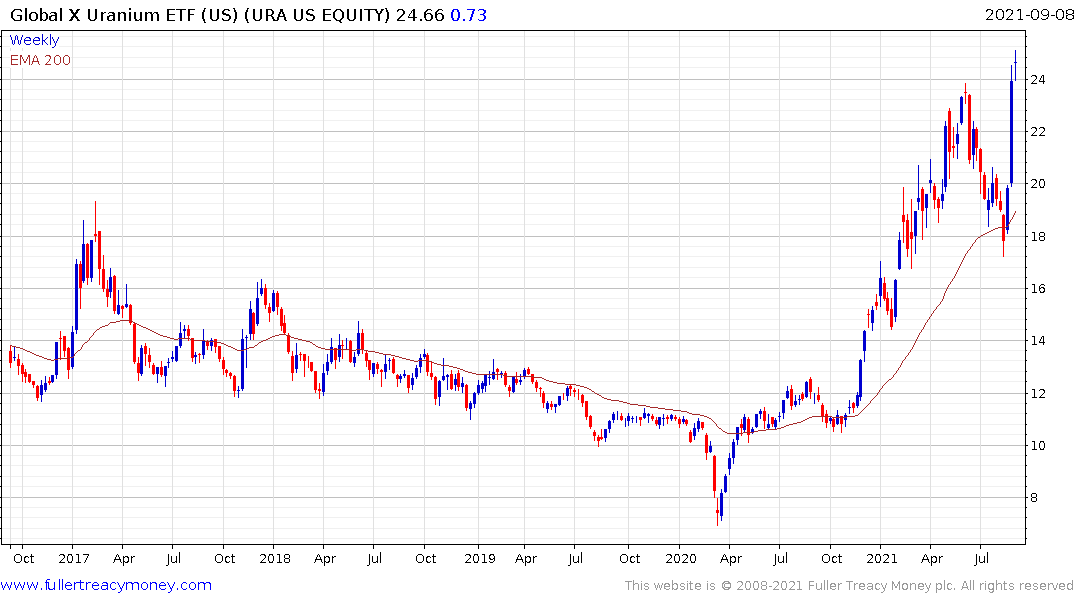 The Global X Uranium ETF surged on Friday and is now trading at a new recovery high. A sustained move below the trend mean would be required to question medium-term scope for continued upside. 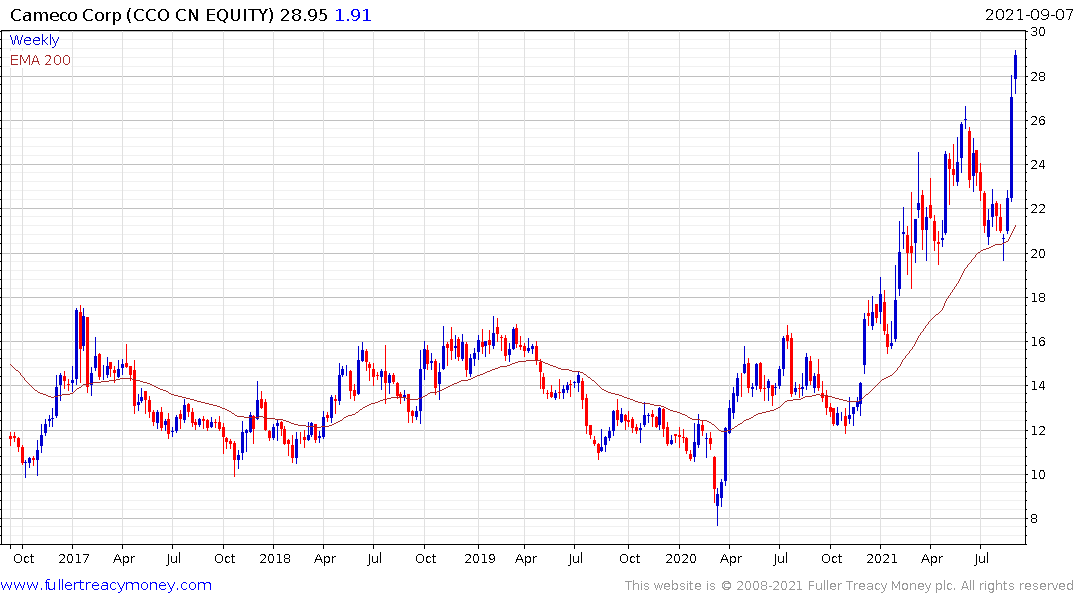 Cameco also surged on the news and is now short-term overbought.

Geiger Counter has a similar pattern. 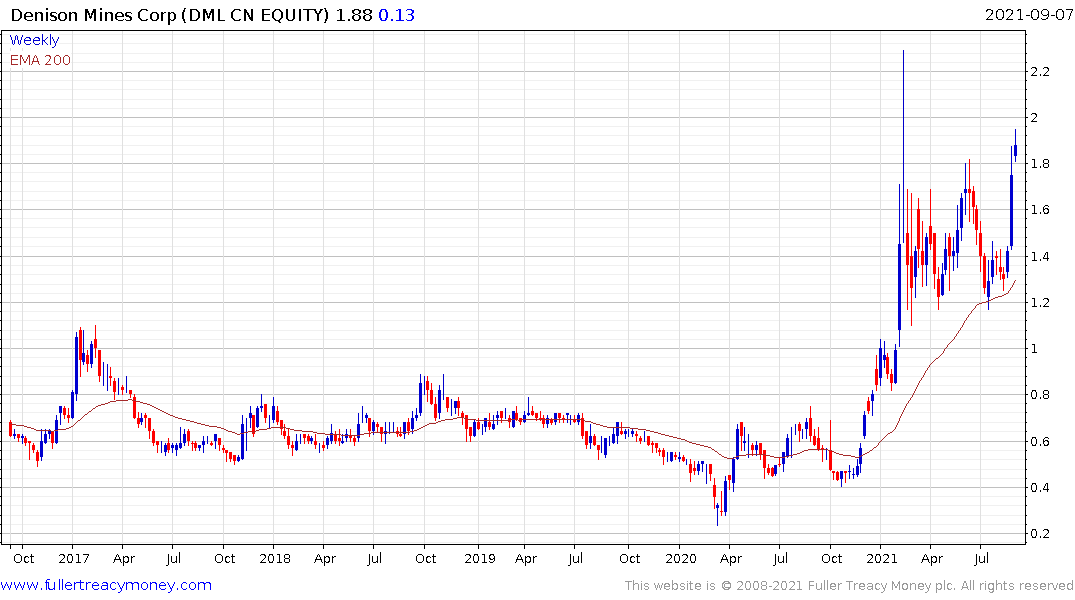 Denison Mines is back testing the upper side of its first step above its base. 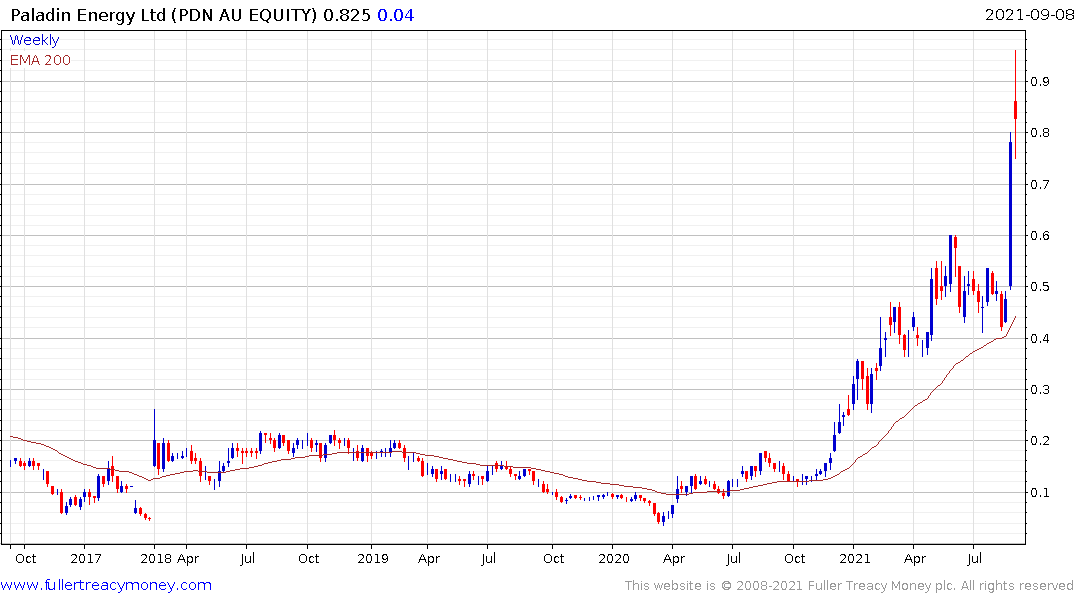 Paladin Energy has been a relative strength leader and paused today suggesting that the initial bout of enthusiasm for the sector may give way to some consolidation.