“There’s been a sea change in markets, and it’s one the Fed needed to respond to,” said Lou Crandall of Wrightson ICAP. “In the current market environment, there is just not enough elasticity in the repo market to handle the big seasonal swings of the banking system. The Fed needed to come in now and alleviate the immediate problem, while it is also working on long-term solutions.”

The Fed has considered introducing a new tool, an overnight repo facility, that could be utilized when needed to reduce pressure on key money market rates, but no decisions have been announced.

The New York Fed declined to comment on the events of this week.

Actions like the Fed took Tuesday were once commonplace, but stopped being so when the central bank expanded its balance sheet and started using a range of rates to implement its policy in the aftermath of Lehman Brothers’ 2008 collapse.

Securities eligible for collateral in the Fed operation include Treasuries, agency debt and mortgage-backed securities. In an overnight system repo, the Fed lends cash to primary dealers against Treasury securities or other collateral.

Bank balance sheets are not what they used to be. One of the primary results of the heavier regulations imposed on the sector since the financial crisis has been to cut the primary investment banks out of risk taking. That is impeding their ability to provide liquidity when the market needs it and is likely to result in the Federal Reserve intervening more often to assist.

That virtually ensures the Fed’s balance sheet will need to be allowed to expand even without a fresh round of quantitative easing. Considering the quantity of debt the Treasury plans to sell between now and the end of next year, there is ample scope for the Fed to have to participate in order to ensure the yield remains contained. The last thing the government needs is to have to pay up to meet its funding requirement. 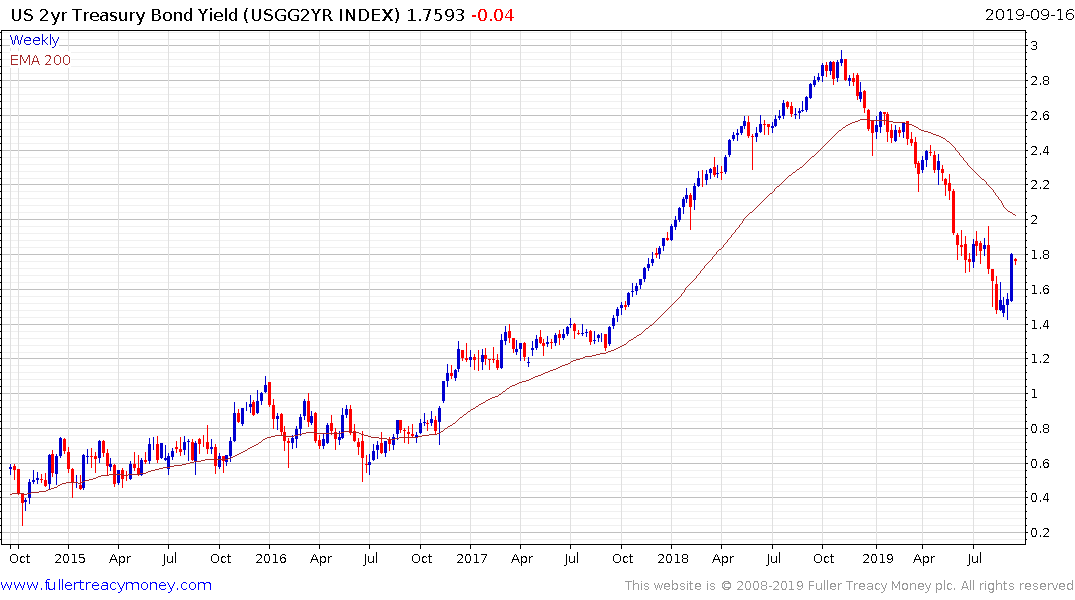 The upward dynamic on US 2-year yields last week is the largest in years and suggests a peak of at least near-tern significance. It is now testing the sequence of lower rally highs and a sustained move back above 2% would break the trend of compression evident since last year.