Britain has abandoned attempts to force the EU to start talks on a future trade deal immediately, and instead the UK’s “exit bill”, and other issues, will come first. David and Barnier have agreed a two-page schedule for talks (pdf), including the dates for five rounds of negotiations stretching into October. As the EU demanded, this involves the “exit bill”, the rights of EU nationals and Ireland being discussed before talks on a future trade deal start later in the process. Davis rejected claims that this amounted to a climbdown, arguing that later trade talks will take place in parallel with talks on the exit arrangements , but there is no doubt that the UK has had to back down from its original
demands. (See 6.07pm and 6.33pm.)

Barnier has said that a “fair deal” for the UK is possible. And he has promised never to work against the UK. He said:

For both the European Union and the United Kingdom, a fair deal is possible and far better than no deal. That is what I said to David today. That’s why we will work all the time with the UK and never against the UK. There will be no hostility on my side. I will display a constructive attitude firmly based on the interests and support of the 27.

Davis also sounded positive. He said that the talks had been “very productive” and that a deal was “eminently achievable”.

But Barnier has also said he is not planning to make “concessions” to the UK. Asked if there would be any concession from the EU, he said:

Basically, we are implementing the decision taken by the United Kingdom to leave the European Union, and unravel 43 years of patiently-built relations.

I will do all I can to put emotion to one side and stick to the facts, the figures, and the legal basis, and work with the United Kingdom to find an agreement in that frame of mind ...

The United Kingdom has decided to leave the European Union, it is not the other way around. The United Kingdom is going to leave the European Union, single market and the customs union, not the other way around. So, we each have to assume our responsibility and the consequences of our decisions. And the consequences are substantial.

While much has been made of the EU’s advantages in the Brexit negotiations, as I see it the UK has three primary bargaining chips. First is the size of the exit bill which already forms part of the EU’s budget. The EU is very keen to get this matter settled quickly because it represents a significant hole in what the group has to spend. It looks like the EU has won the right to negotiate this first because the prospect of the UK withholding the money over the course of a two-year negotiation process is something they cannot handle.

The second is that the UK has some very clear options available to improve its competitiveness relative to the EU should it wish to adopt them. In the event that no access is granted via the EEA, or other such arrangement, then the UK could adopt low corporate taxes, private banking laws, streamlined regulations, trade deals as well as other economic incentives to attract inward investment. An independent UK with its competitive economic vitality restored would perhaps be the greatest riposte to the EU’s sclerotic bureaucracy.

The third, often unspoken avenue is the strength and experience of the UK’s military. France might be the EU’s nuclear power but the UK is also a nuclear power in its own right and that silent point suggests the EU cannot be too onerous in its retribution. 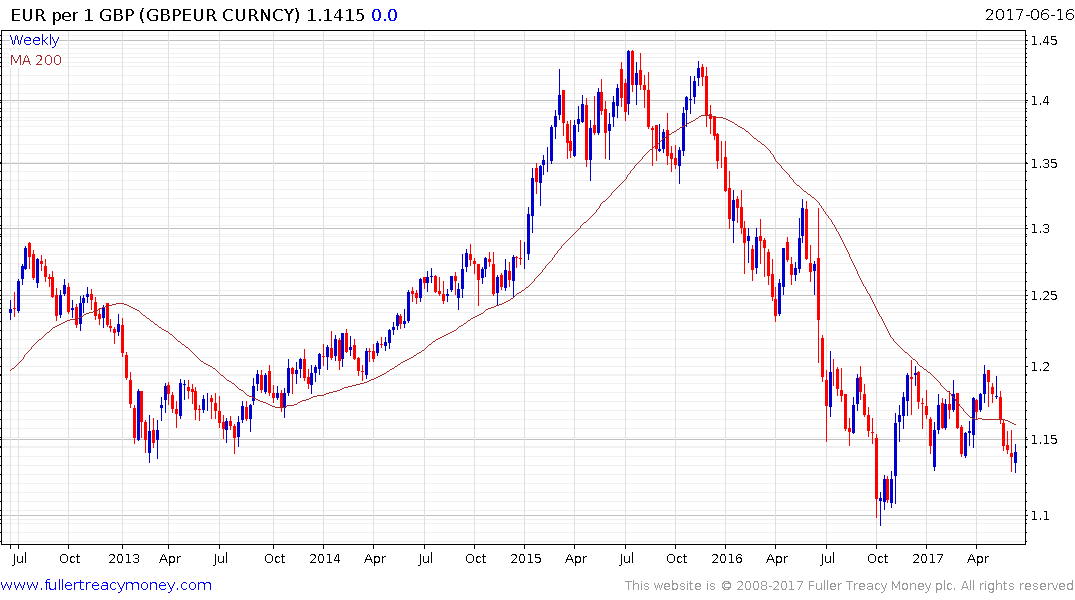 The interaction of the respective currencies is likely to represent the flow of sentiment between the two camps as negotiations proceed. The Pound broke its progression of higher reaction lows following the election result but has improved on that performance over the last week. It will need to hold the €1.125 area if the ranging environment which prevailed for much of the last year is to hold.