U.S. stocks rose from a two-month low as Apple Inc. extended a rally, while a rebound in crude boosted shares of energy producers. The selloff in longer-dated bonds eased amid data showing the American economy is on uneven footing.

The S&P 500 Index jumped as Apple pushed its four-day gain past 11 percent. The index slipped toward its 100-day moving average before pushing higher as the level held for a fourth day. Industrial production contracted more than forecast and retail sales unexpectedly slid, sending the odds for a rate increase next week below 20 percent. The dollar was little changed after initially turning lower on the sales data.

Sterling slid after the Bank of England said another rate cut this year is possible. Oil erased gains to fall back below $44 a barrel.

Equities continued to whipsaw investors after Friday’s rout jolted markets from a two-month torpor and wiped almost $2 trillion in value from stocks amid concern that central banks would deliver smaller doses of stimulus even as the global economy sputters along. Apple’s advance has buttressed U.S. equity indexes, as consumers snapped up the new iPhone model.

Apple still has the world’s largest market cap at $620 billion so its underperformance over the last year has represented a drag on the wider market. In fact the drag has been compounded by the impact Apple’s decline in sales growth has had on its suppliers. 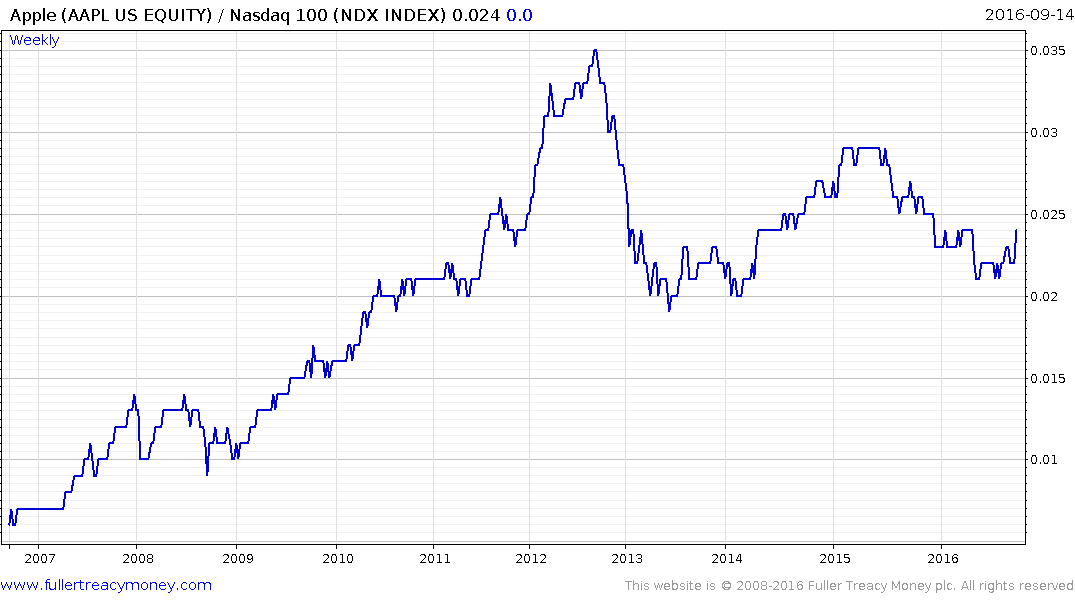 The Apple/Nasdaq-100 ratio peaked in 2012, found support over the last couple of weeks near the 2013 lows and Apple has now returned to a position of outperformance. Part of the reason for this outperformance is the release of its new phone and the well-received update to the Apple Watch. Samsung’s issues with exploding batteries will also have benefitted the share. 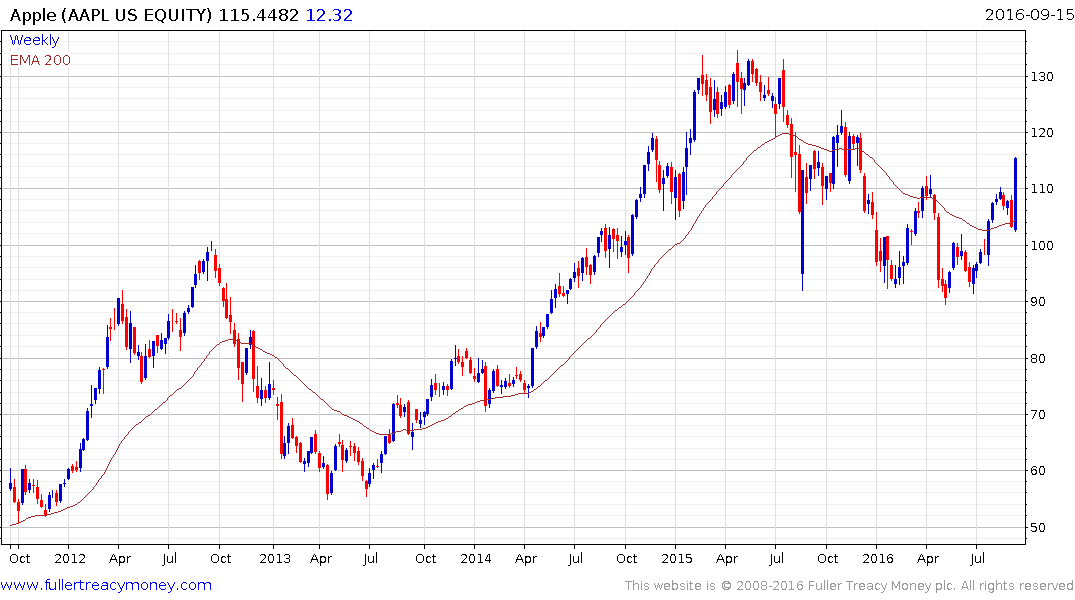 This week’s impressive rally has broken the more than yearlong progression of lower rally highs and a sustained move below the trend mean would be required to question medium-term recovery potential. 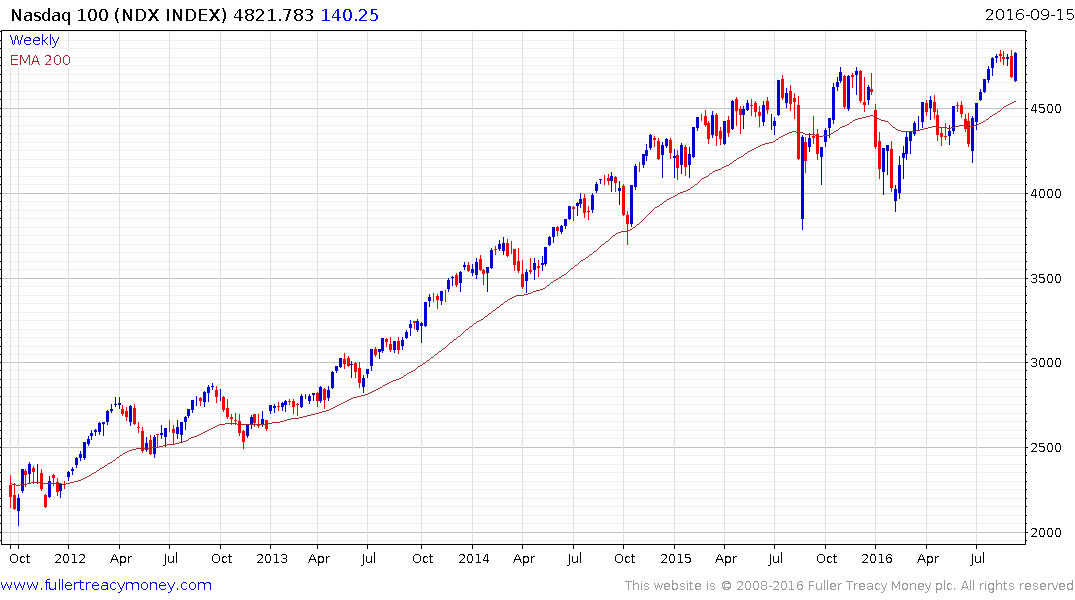 The Nasdaq-100 Index has found at least near-term support in the region of the upper side of the underlying trading range and is leading the wider market higher. A sustained move below the psychological 4,500 level would be required to begin to question medium-term scope for continued upside. 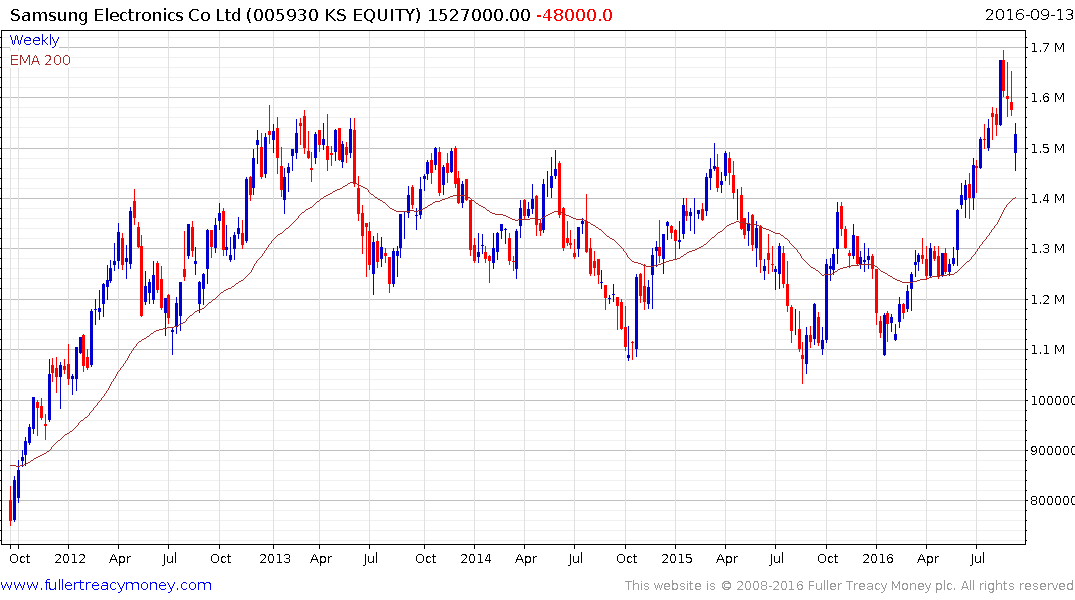 Samsung Electronics has at least paused in the region of the trend mean and will need to continue to hold above it if medium-term potential for continued higher to lateral ranging is to be given the benefit of the doubt.