Earlier this month Freeport LNG Development LP’s export terminal in a beach town south of Houston began buying and liquefying gas with the expectation of sending out its maiden cargo in September. The Freeport facility, the fifth to begin operating in the lower 48 states since the first opened in early 2016, should help push gas consumption from LNG exporters to a new high. Last week, a record nine LNG vessels left the U.S. carrying cargoes, according to Jefferies Financial Group Inc.

In July, LNG exporters consumed an average of about 6 billion cubic feet of gas per day, according to the U.S. Energy Information Administration. That is the most yet and is equal to roughly 7% of total U.S. gas production. Analysts expect demand from LNG facilities to absorb about 12% of total production by next summer as additional facilities start up and existing terminals boost their capacity.

But if those projects are delayed because of low prices overseas or if existing LNG plants slow down or take advantage of the lull to perform extended maintenance, then the domestic gas market could be swamped, sending prices even lower.

“If that demand goes away even for a couple months, it becomes a real problem for the balance of the market,” said Welles Fitzpatrick, an analyst with SunTrust Robinson Humphrey.

Natural gas is a commodity widely associated with the rise of the global middle class. As living standards improve, and infrastructure is laid down, demand for cleaner burning fuels trends higher. The big change in the market over the last few years has been the creation of the global market for natural gas. Prior to this it was primarily a regional market because of a lack of transportation options. Significant investment in LNG terminals all over the world is turning the USA, Australia and potentially Canada into natural gas exporting giants to compete with Russia and Qatar. That represents a significant change to the status quo.

That competition for global markets is likely to help keep a lid on prices for the foreseeable future and pretty much removes the potential for significant bull markets like what we saw in the early 2000s for at least the next five years. The Henry Hub price has rallied this month to challenge its sequence of lower rally highs for the year but a sustained move above $2.50 will be required to question the medium-term downward bias. 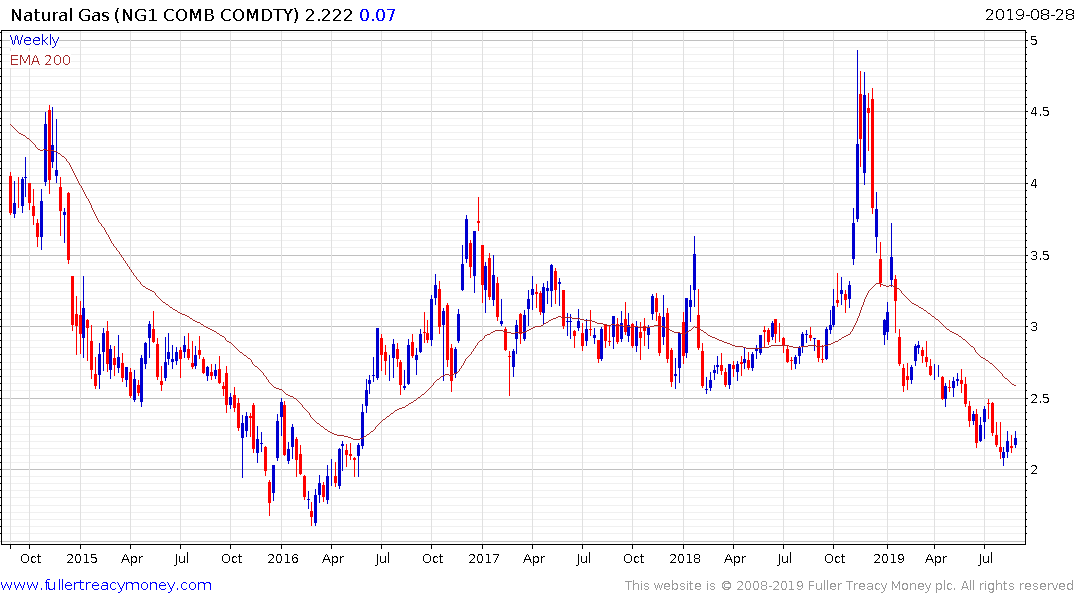 Low natural gas prices represent a tailwind for consumers, globally. They also bolster the argument for fuel cells because of the low input prices.