U.S. Gasoline Demand Is Likely to Slide
Comment of the Day

U.S. Gasoline Demand Is Likely to Slide by Eoin Treacy

Even the low end of the forecast by Wood Mackenzie, which provides in-depth analysis for a wide range of clients including large oil companies, utilities and banks, is a more bullish outlook for electric-car adoption than many oil-and-gas companies have espoused.

Spencer Dale, the chief economist of energy company BP PLC, said last week in Houston that while he expects electric cars to start gaining traction, the internal-combustion engine still has significant advantages over electric alternatives and widespread adoption won’t happen in the next two decades.

“It will still take some time,” Mr. Dale said. “Electric vehicles will happen. It is a sort of when, not if, story.”

The electrification of the automobile has evolved more slowly than some expected, in part thanks to low fuel prices and limited battery life that meant drivers had to recharge every 100 miles. But more capable cars are coming to market as tightening air-pollution regulations in places such as Europe and China force auto makers to engineer better electric vehicles.

The U.S. market today remains tiny, with pure electric cars amounting to less than 1% of total sales so far this year. But Tesla’s decision to build cars with sizable batteries that can run for more than 200 miles before recharging has led a number of competitors to double down on their own electric-car designs.

Tesla remains the standard bearer for electric cars because, more than any other company, it has succeeded in marketing a car people aspire to own. However it is not the only, or even the biggest company manufacturing electric vehicles. In fact Tesla’s success ensures it will deal with a lot more competition as incumbent manufacturers release their own models. 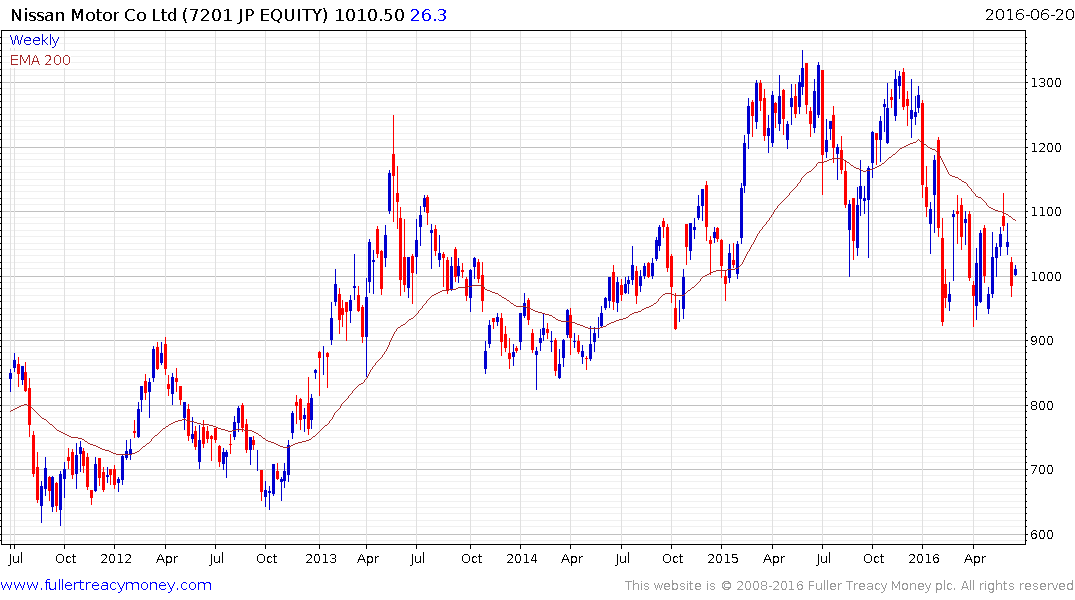 Nissan-Renault is by far the largest seller of electric vehicles and accounted for more than a quarter of all sales last year. The share has been confined to a volatile range for more than three years but is currently bouncing from the lower boundary. 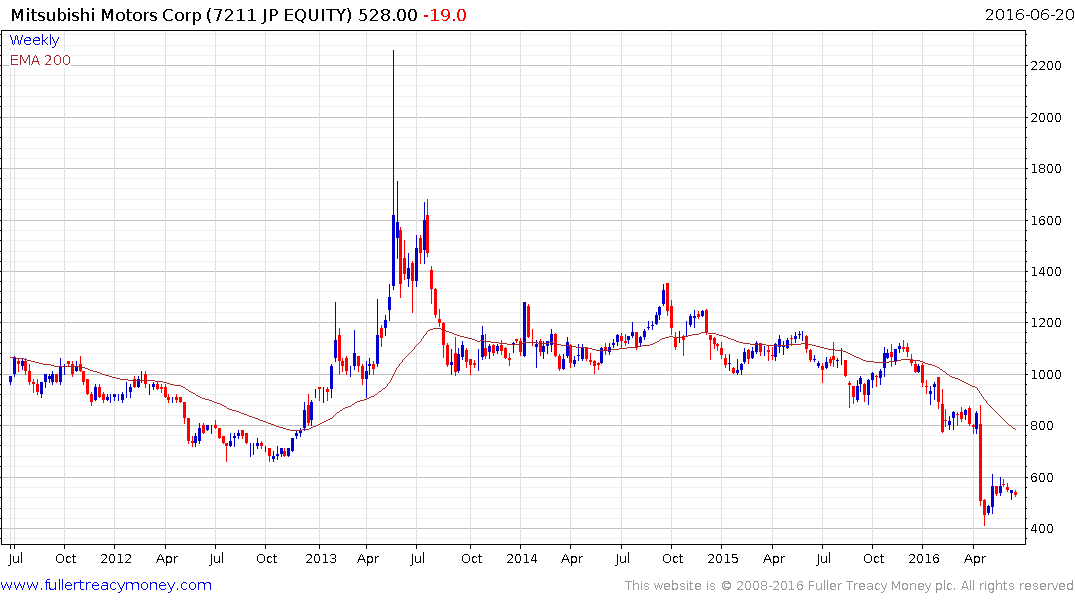 Mitsubishi will be releasing a plug-in hybrid version of their Outlander SUV in the USA later this year. Since pick-ups and SUVs represent the largest car segment, the introduction of a plug-in is a direct play on mass market appeal. Right now the company’s issue with reporting inaccurate mileage claims is weighing on the share. 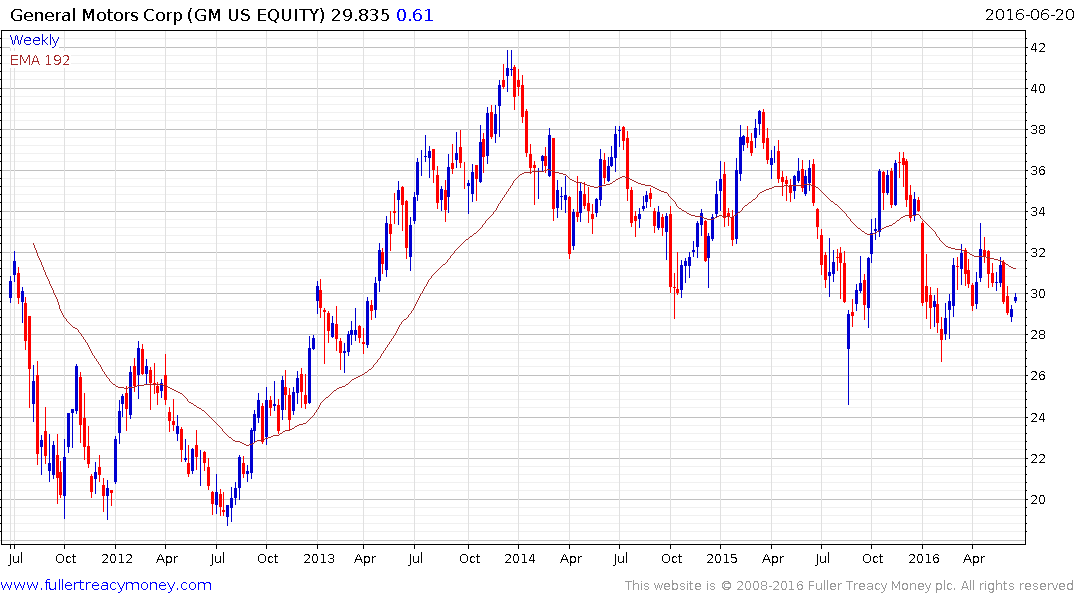 General Motors’ Volt has been one of the more popular cars and owners I’ve talked to have been happy with their purchase.  The share will need to hold the $27 area if support building is to be given the benefit of the doubt. 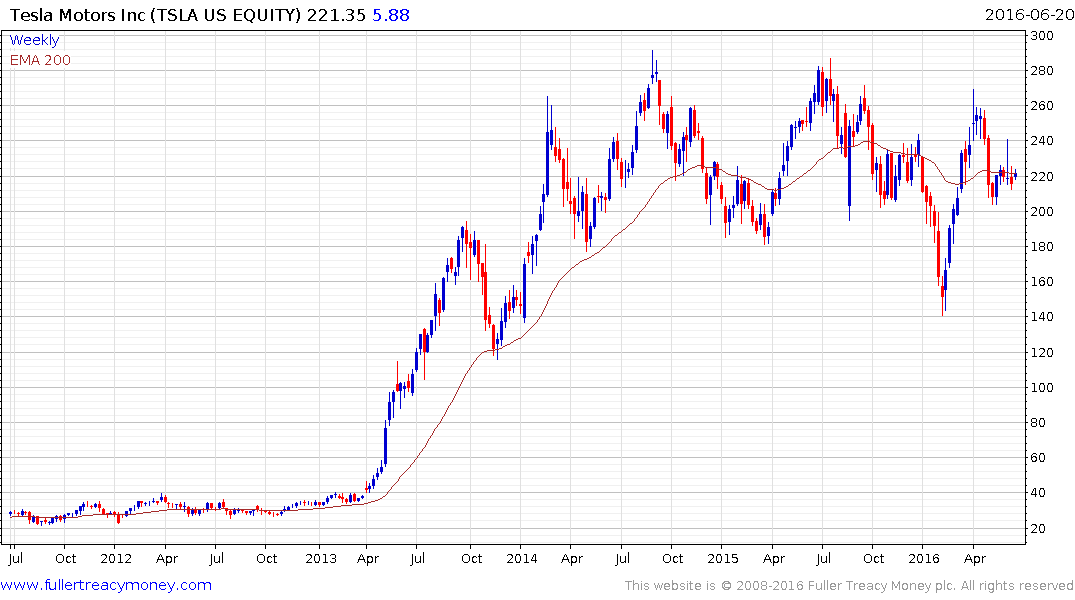 Tesla’s share has been confined to a volatile range since they began investing in their battery gigafactory. With that project now reaching completion attention is turning towards the company’s ability to meet its aggressive production schedule. The $200 area has offered support on a number of occasions since 2014 and the share is rallying from that level once more. 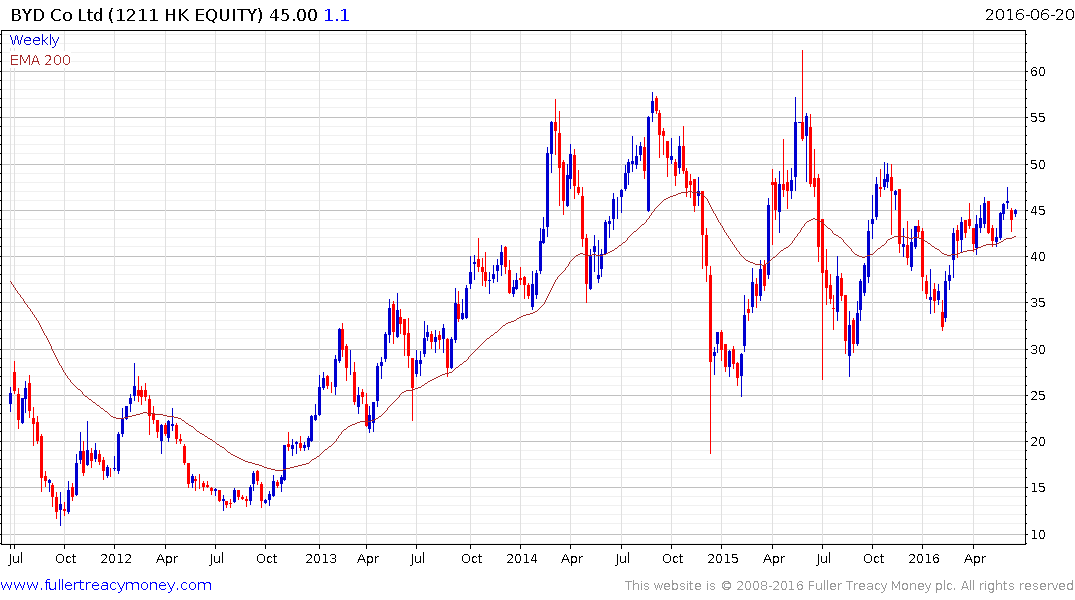 BYD is still China’s largest producer of electric vehicles and despite rather extreme volatility over the last couple of years the share has been consolidating mostly above the 200-day MA since March. A sustained move below it wold be required to question potential for additional higher to lateral ranging. 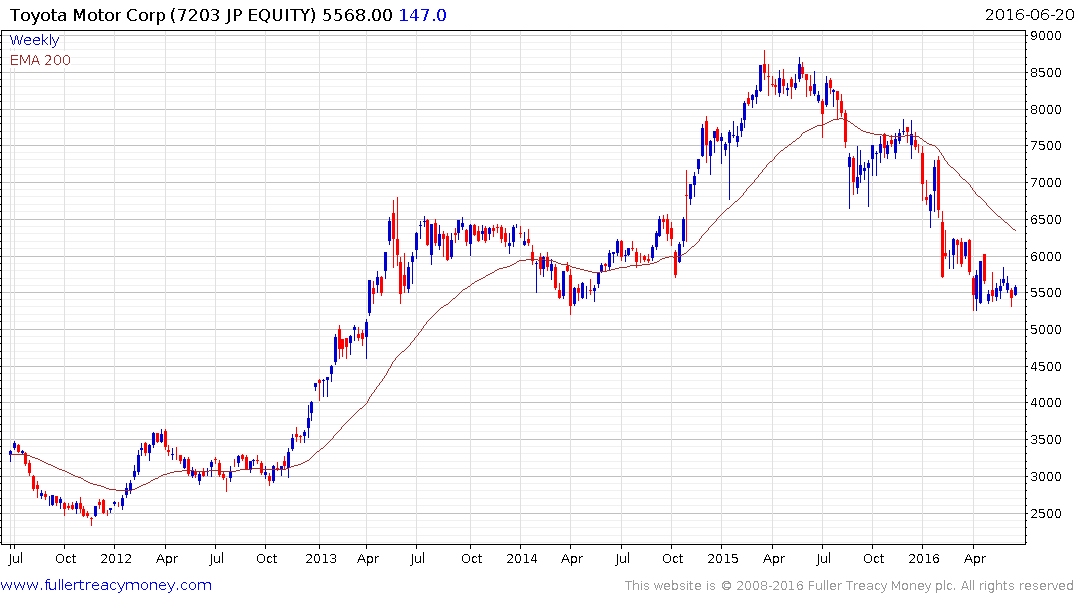 Interestingly, while Toyota was the first major company with a plug-in hybrid, with the Prius, it is now eschewing further development and is instead pioneering fuel cell technology. The Mirai fuel cell vehicle is now for sale in the USA and a fuel station just opened down the street from my home. With such low natural gas prices Toyota is betting that hydrogen production will be competitive with gasoline prices for the foreseeable future and would additionally benefit from any technological innovation that makes production more efficient. The share has held a progression of lower rally highs for more than a year and will need to sustain a move above the trend mean to signal a return to demand dominance beyond short-term steadying.