U.S. Five-Year Yield Highest Since February 2020 in Bond Selloff
Comment of the Day

Treasury yields rose a second day, with five-year rates hitting the highest since before the pandemic took hold in the U.S., amid increasing conviction that the Federal Reserve will raise rates at least three times beginning in May.

Yields across the curve are rising for a second straight day, after Monday’s selloff lifted the 10-year note’s yield by nearly 12 basis points in its worst start to a year since 2009. The two-year yield topped 0.80% for the first time since March 2020.

At 1.38% the 5-year yield has fully unwound the pandemic panic compression of early 2020.  In that time total debt outstanding has increased by $5.7 trillion or 24.6%. That’s an eyewatering figure.  Why the market did not flip out about it is a question which flummoxed investors in 2021. 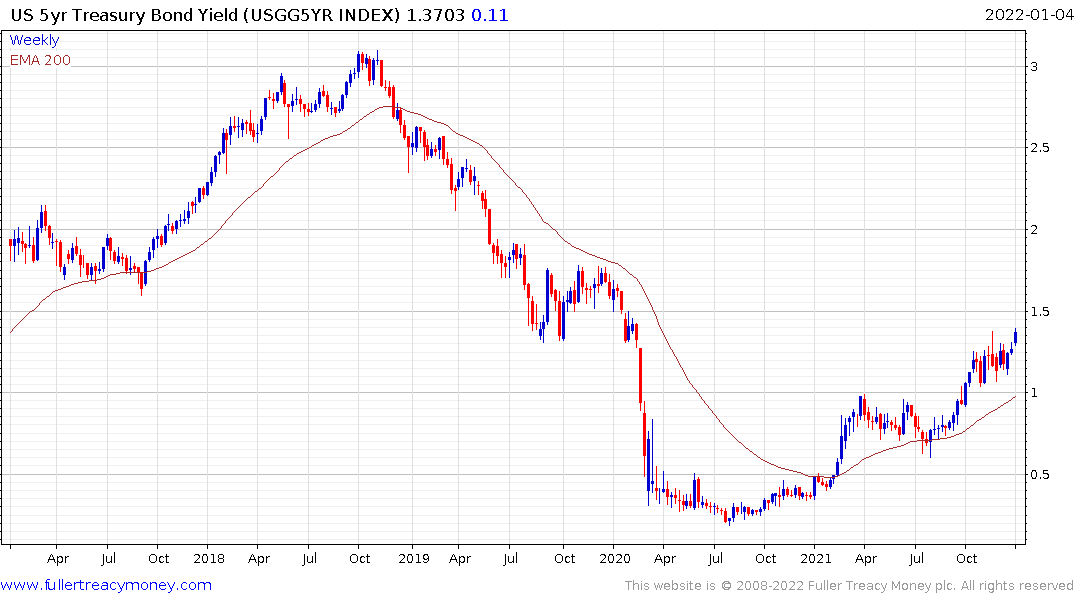 This ratio of total US government debt/nominal GDP holds part of the answer. It is true that debt exploded higher during the pandemic but GDP has been growing faster since July of 2020. That’s been a strong support for corporate earnings and has fuelled speculation in all manner of financial assets. Here is a link to the Fed’s version.

If the trend were to continue, it would suggest the trajectory of the US government’s debt is both sustainable and improving. That’s totally dependent on the strong rebound from the pandemic persisting…indefinitely. That’s a big ask and ignores the dependence of companies on low rates and access to ample liquidity. 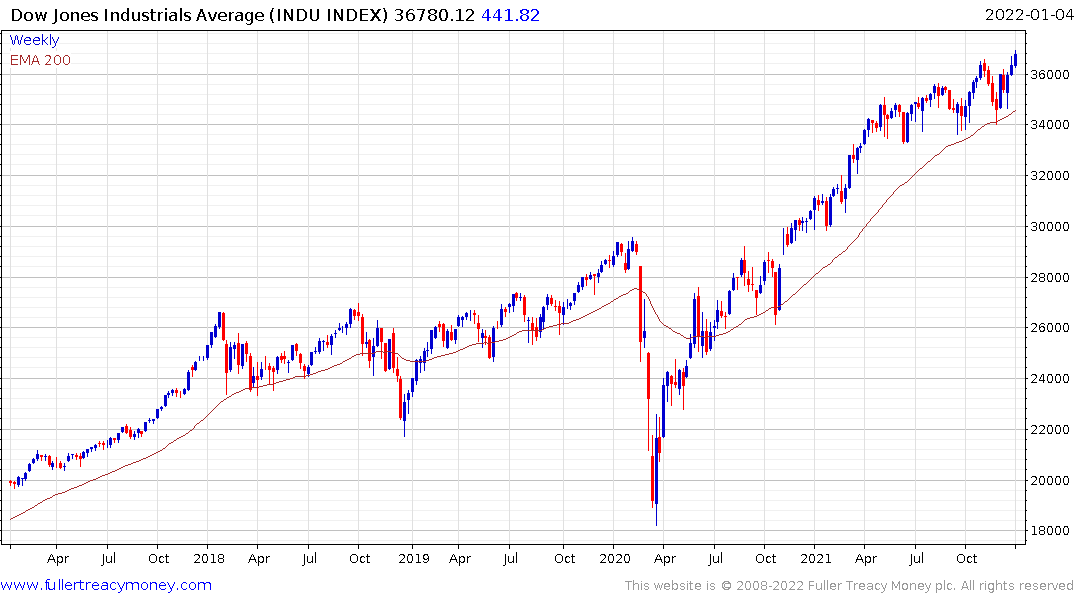 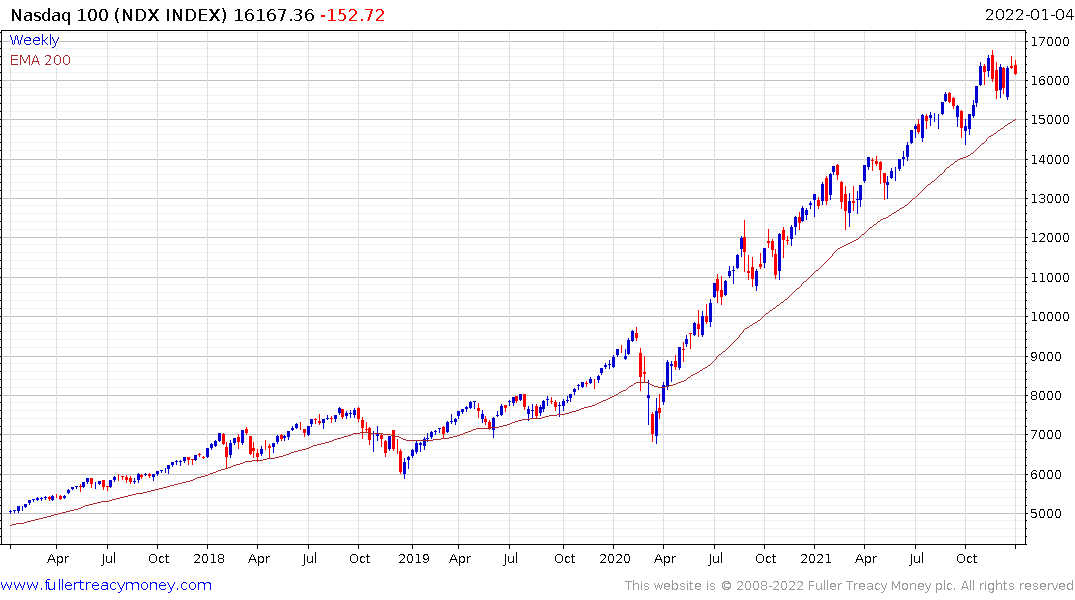 The relative strength of the Dow Jones Industrials versus the Nasdaq-100, against a background of higher yields, suggests capacity for a rotation away from interest rate sensitive sectors for as long as yields are rising.

The big question for the 1st quarter remains how willing politicians will be to pass significant additional spending measures. The sustainability of the debt situation is likely to hinge on the answer to that question. Rising yields suggest investors are willing to give the benefit of the doubt to the economic expansion while also remaining alert to inflationary pressures. 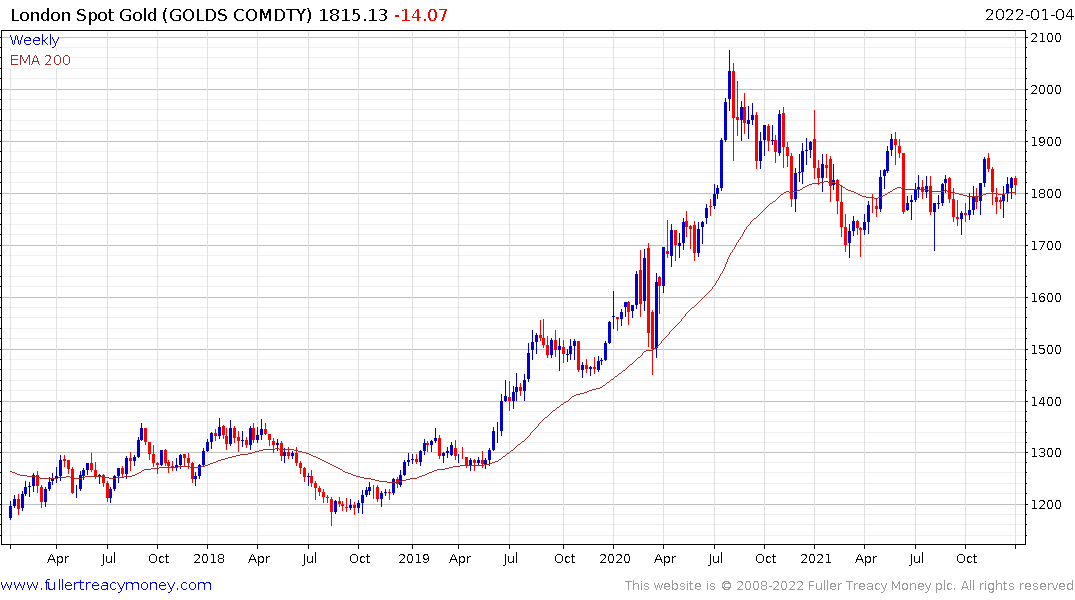 Gold continues to build support and has held a sequence of higher major reaction lows since March.