The coronavirus crisis has transformed the fiscal landscape at a stroke. Britain was on course for a budget deficit of 55 billion pounds in the fiscal year starting April. Now, according to the Institute for Fiscal Studies, borrowing could be as much as 200 billion pounds as an economy on course to shrink at least 5% this year hammers tax revenue and drives up spending on welfare.

That could leave the deficit just below the 10% reached in the aftermath of the financial crisis and push up already elevated debt levels.

The chancellor announced his first economic package to deal with the outbreak when delivering the budget on March 11, unveiling 12 billion pounds of measures to mitigate the effects of the outbreak on the economy.

As evidence mounted that the crisis was snowballing, he followed up with a 350-billion pound stimulus package comprising government-backed loans as well as 20 billion pounds of grants and tax cuts for struggling companies.

Then, last Friday, he announced 7 billion pounds of extra welfare spending and said the government would pay 80% of salaried employees’ wages up to a maximum of 2,500 pounds a month -- a plan Bloomberg Economics estimates will cost 17.5 billion pounds.

Announcing further details of the job-retention program today, the Treasury said the government will also cover employers for the National Insurance and minimum auto-enrolment pension contributions of furloughed workers, saving firms 300 pounds a month per employee on average.

The trouble with the coronavirus is not so much in the mortality rate but in the speed with which it is spreading. Overloading hospitals with scarce resources and scary reports of tens of thousands dying has put a great deal of pressure on the economy. However, it is also worth considering that despite the scale of the challenge faced in Italy, they have seen the peak in the infection growth rate. That suggests the problem is unlikely to get worse.

The UK and USA have not seen their peak infection growth rates yet but some of the biggest supporters of dire predictions seem to be walking back their earlier claims. Neil Ferguson for example has drastically reduced his death toll estimates.

The impact from the coronavirus may be profound and it may not, but it is certainly likely to be temporary. The efforts underway to develop vaccines for COVID-19 will bear fruit not least because of the resources being committed and the necessity of a solution.

On the other hand, the measures put in place to support the economy have a decidedly permanent aspect. Massive fiscal deficits will not easily be walked back and not least because it will take a couple of quarters for consumer activity to recover after the lockdown ends.

It is worth remembering central bank independence is a relatively new concept in the UK introduced first in 1997. The introduction of Modern Monetary Theory and close co-operation between the fiscal and monetary administrations is therefore not so large a step and we have plenty of recent evidence of how quickly the borders between the two can be blurred.

Printing money to pay wages, national insurance contributions and pensions is a clear effort to ensure continuity through a crisis which is a good thing but it is does raise important questions about the purchasing power of a currency that can so easily be manipulated. Moral hazard is also something I have seen no discussion of. 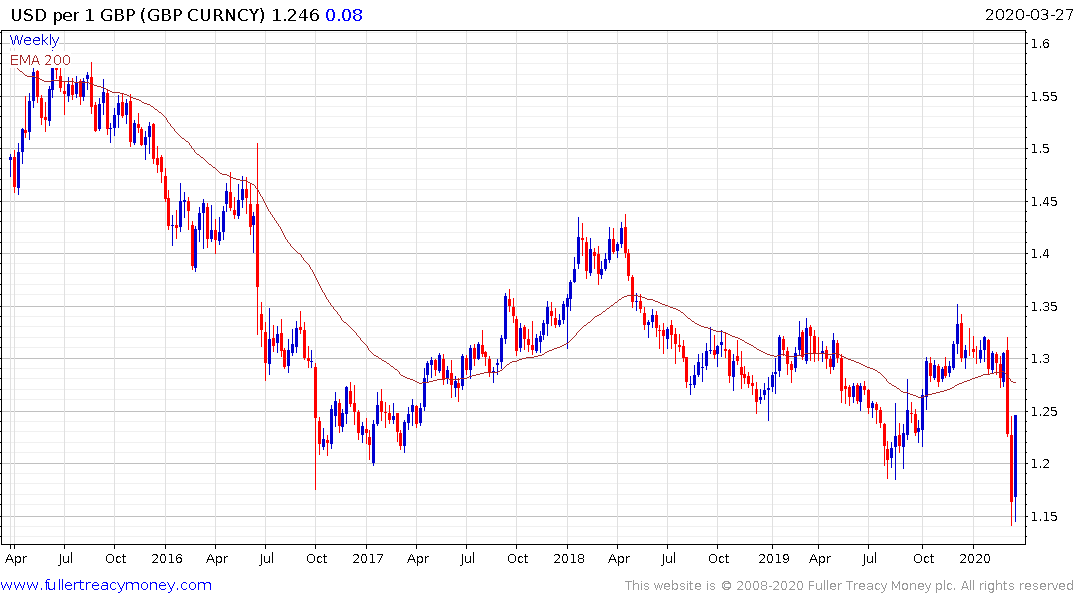 The fact the Pound continues to rally only serves to highlight the USA is going even faster down the rabbit hole of monetising private sector debts. 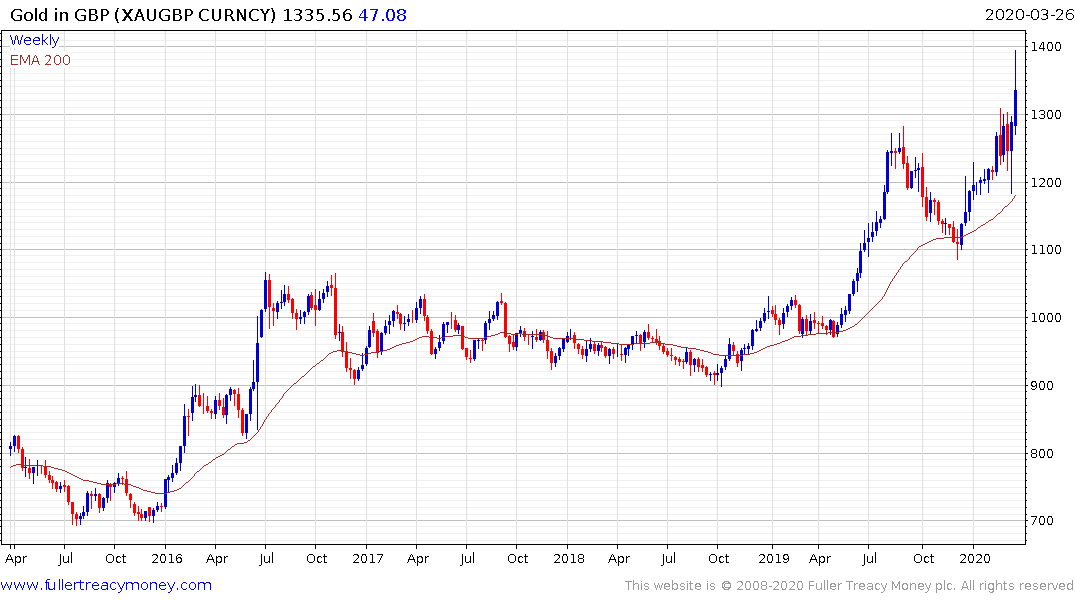 The price of gold in Pound hit a near-term peak of £1400 earlier this week and is now consolidating the recent strength. A sustained move below the trend mean would be required to begin to question medium-term scope for continued upside. 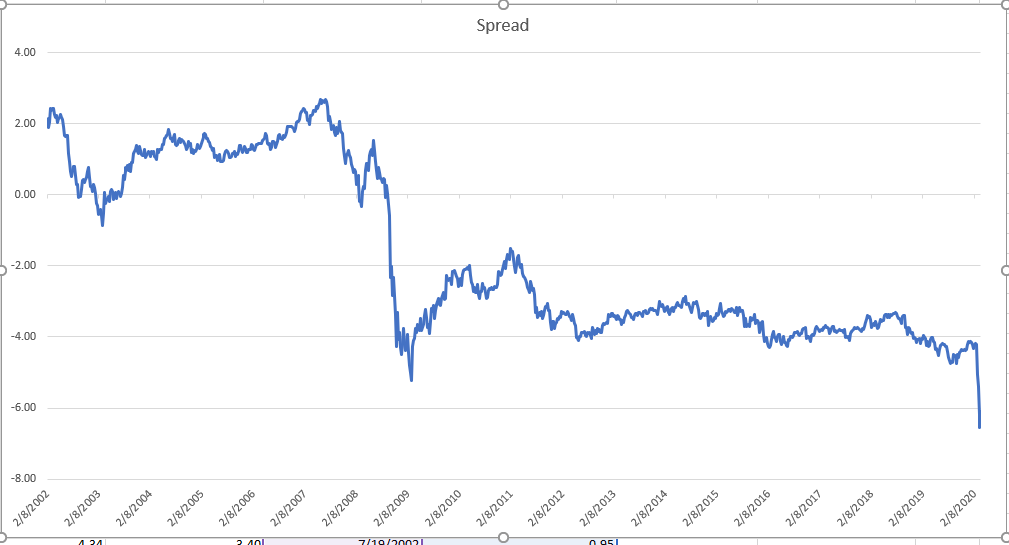 There is obviously some room for dividends to be cut over the course of any recession. However, based upon current figures the dividend yield on the FTSE-100 is more than 6% greater than that on Gilts. Even if the dividend on the whole index halves it is still attractive what is being offered by government bonds. 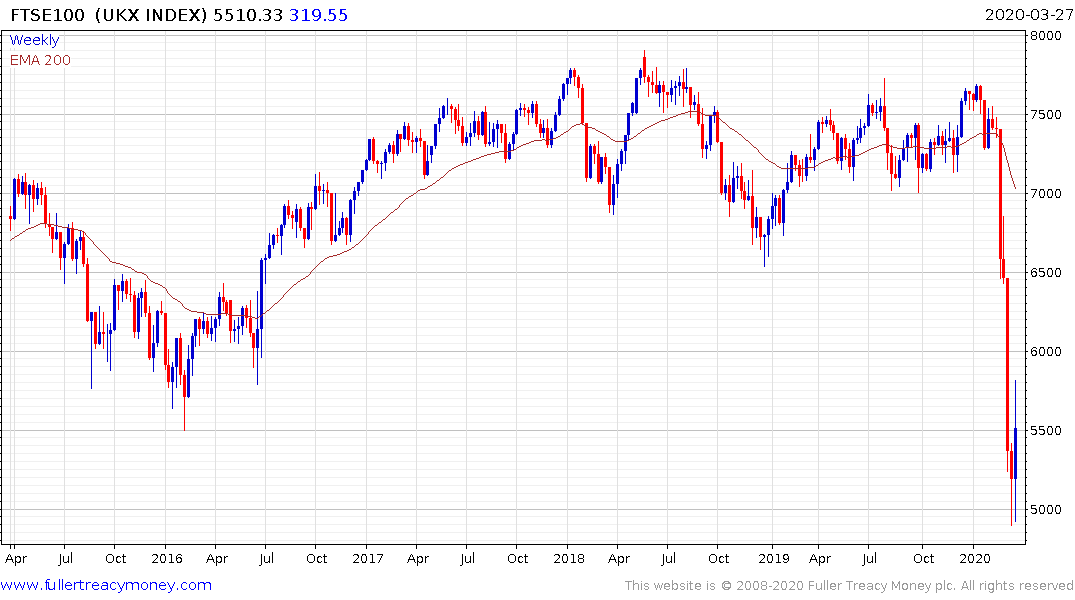 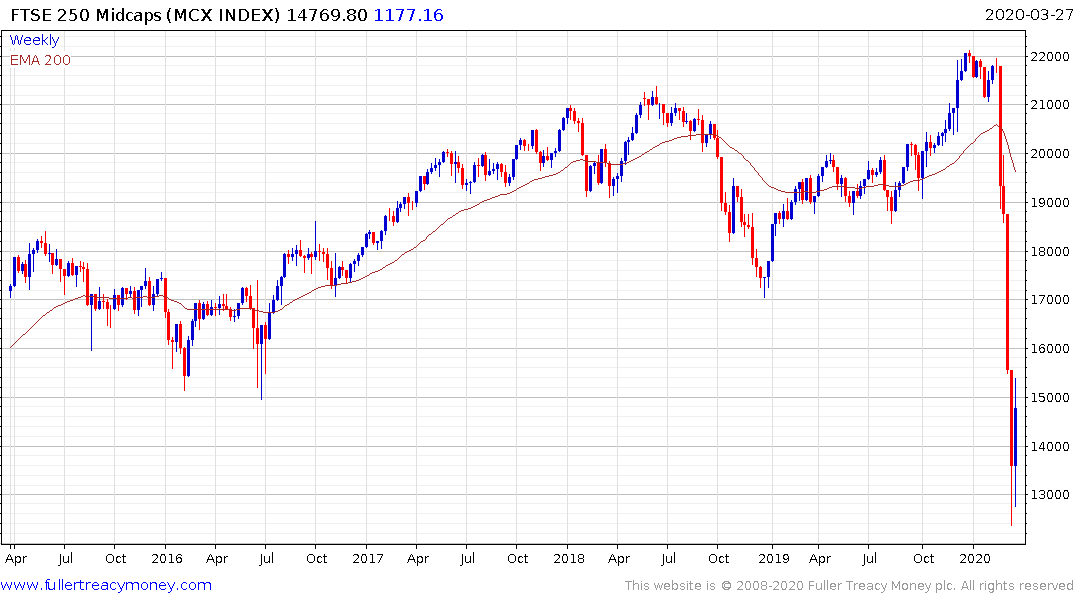 Both the FTSE-100 and FTSE-250 are deeply oversold and exhibiting the first signs of having found support.

The report from the London Business School may also be of interest.