“@DavidGHFrost
6/6 Finally, I want to be clear that the Government will not agree to ideas like the one currently circulating giving the EU a new right to retaliate with tariffs if we chose to make laws suiting our interests.We could not leave ourselves open to such unforeseeable economic risk.”

Frost’s comments come ahead of a fresh round of talks with the EU next week. The two sides are trying to break an impasse that risks a damaging rupture at the end of this year. Without a trade accord, Britain and the EU would default to trading on World Trade Organization terms from Jan 1. 2021, meaning steep tariffs and an economic shock.

A key sticking point in the talks has been the EU’s demand that the U.K. commits to tracking the bloc’s rules in areas such as environmental and labor protections and state aid, for fear that Britain would become a competitor on its doorstep. The British government sees the request as inconsistent with the
principle of sovereignty that it argues was at the core of the vote for Brexit.

“This needs to be a real negotiation and some of the EU’s unrealistic positions will have to change if we are to move forward,” Frost said. “U.K. sovereignty, over our laws, our courts, or our fishing waters, is of course not up for discussion.”

The EU is deeply concerned at the prospect of the UK competing aggressively. There is a simple reason for that. Self-determination, which the UK has just recovered, is easier to manage than decisions by committee. Any counter measures the EU uses against the UK will need to focus on broad market access and tariffs because it is incapable to taking competitive steps on its own for fear of upsetting its own internal balance of relationships. The EU’s negotiations are aimed at ensuring the status quo is maintained.

For its part, the UK has to weigh the benefit of competing on a regulatory, tax, subsidy and tariffs footing with the EU. The price is market access. Therefore, the big question is whether the UK has more to gain from aggressively pursuing a globally competitive market friendly approach or relying on the same suite of polices as the last forty years? The clear majority Boris Johnson won in the last election was a clear signal the British people are fully behind the idea of competition versus cooperation.

The UK has to do everything possible to attract inward investment and secure markets for all its exports. The greatest uncertainty lies in the willingness of politicians to do what is necessary to make it a success. COVID-19 has thrown any hint of preparation in disarray. The challenge will be to regroup in the next six months to come to some form of accommodation with the EU. The EU might be bigger but the UK has the capacity to be nimbler if they choose to act. 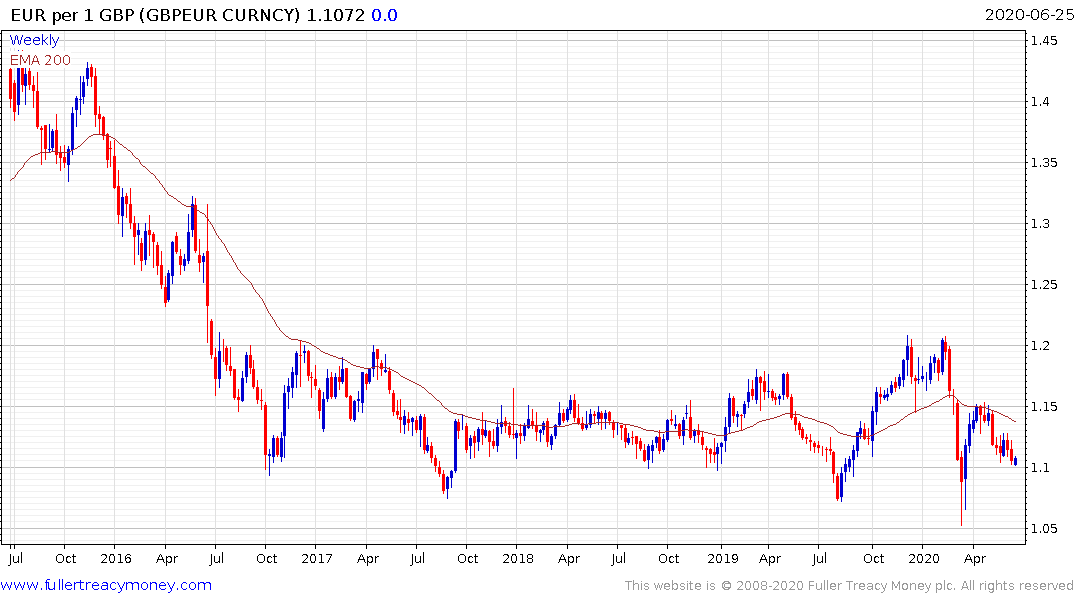 The Pound is back testing the region of €1.10, which represents the lower side of the 3-year range. There have been a number of failed breaks below that level and another similar-sized bounce will be required to confirm a return to demand dominance. 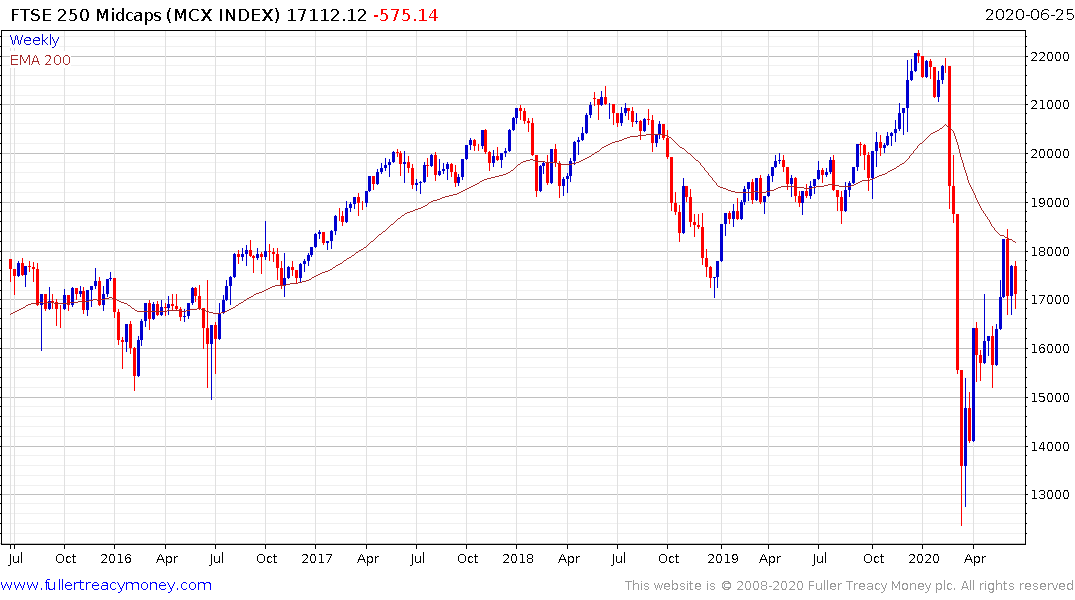 The FTSE-250 has marched higher in a staircase sequence of ranges one above another since the March nadir. It now testing the region of the lower side of the most step and a sustained move below 16000 would be required to question scope for additional higher to lateral ranging.