Kim and Moon embraced after signing the deal during a historic meeting on their militarized border, the first time a North Korean leader set foot on the southern side. They announced plans to replace the 1953 armistice that ended hostilities with a peace treaty by year’s end.

Their statement on a “common goal of realizing, through complete denuclearization, a nuclear-free Korean Peninsula,” stopped short of the “complete, verifiable and irreversible denuclearnization” long sought by the U.S. and its allies. The statement didn’t elaborate on what the term meant and Kim didn’t personally utter the word during remarks Friday.

The International community is understandably skeptical regarding North Korea’s overtures with skepticism considering how duplicitous the country has been over it’s post war history. Some appear willing to think sanctions have played a role, others that China is more active in pressuring the regime but there is another reason why North Korea is suddenly willing to sit down to talk.

Here is a section from the Night Watch geopolitical bulletin that may be of interest:

A research team from the University of Science and Technology of China (USTC) in Hefei concluded that the collapse occurred because of the detonation last September of North Korea’s thermal nuclear warhead in a tunnel about 700 meters (2,296 feet) below the mountain’s peak.

According to an analysis posted to the team’s website, the 100-kiloton explosion on 3 September vaporized surrounding rocks and opened a chasm that was up to 200 meters (656 feet) in diameter. A large section of the mountain’s ridge slipped into the pocket created by the blast.

The explosion turned the mountain into fragile fragments, the researchers wrote. The USTC team plans to publish its findings in the Geophysical Research Letters of the American Geophysical Union, according to the Post article.

Another research team at the Jilin Earthquake Agency of the China Earthquake Administration in Changchun reached similar conclusions to the USTC team. It concluded that the fracture created a “chimney” that could allow radioactive fallout from the blast zone to rise into the air.

If North Korea no longer has a nuclear test site then it’s nuclear capacity has been curtailed by simple geography. Additionally, since it’s test site has the potential to become unstable and could pose a threat to it’s nearest ally, China, then it has a logical reason for pursuing a treaty to get as much from its current nuclear capacity as it can now.

It’s probably too much to hope that this situation will lead to re-unification but it could open up the North Korean economy to greater investment from the South. If that does indeed occur then South Korea could avoid the exorbitant cost of reunification but would gain a cheap labour force. 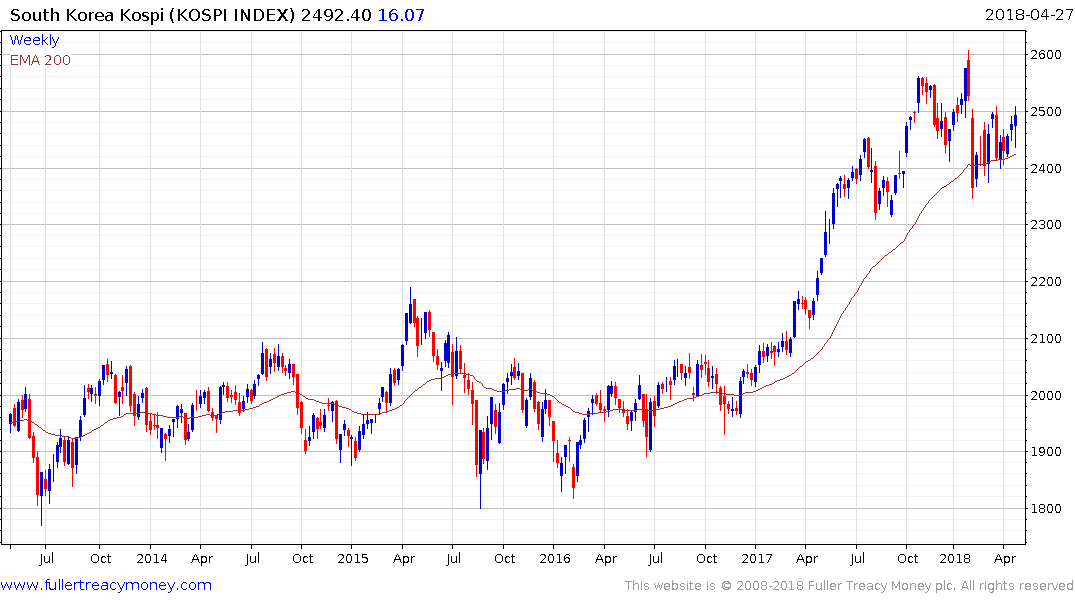 The Kospi Index continues to consolidate the breakout from a 7-year range and a sustained move below the trend mean would be required to question current scope for additional upside.