Turkey halted trades on all listed stocks after sharp declines triggered a market-wide circuit breaker,
with the lira extending declines to a record low.

Trading of equities, equity derivatives and debt repo transactions were automatically halted twice within an hour after the Borsa Istanbul 100 index fell as much as 7%. The index was earlier up more than 5.6% before sinking as a central bank intervention on the currency market failed to stem the lira’s decline. The currency has come under pressure after the central bank cut its benchmark repo rate by a percentage point to 14% on Thursday, despite inflation accelerating to over 21%.

The central bank’s easing cycle since September saw the key rate fall by 5 percentage points, prompting a rush to buy dollars among corporates and retail investors.  President Recep Tayyip Erdogan has advocated for cuts in borrowing costs, arguing that lower rates will eventually free Turkey’s economy from a reliance on short-term foreign inflows. The policy pivot and the ensuing market turmoil prompted complaints from industrialists, who say the current volatility is hurting companies.

Less than two weeks ago the central bank intervened to support the currency. In normal circumstances that would begin to re-instill confidence. By cutting rates and bowing to political will, the central bank today demonstrated it is not able to do what is necessary to avoid a currency and debt crisis. 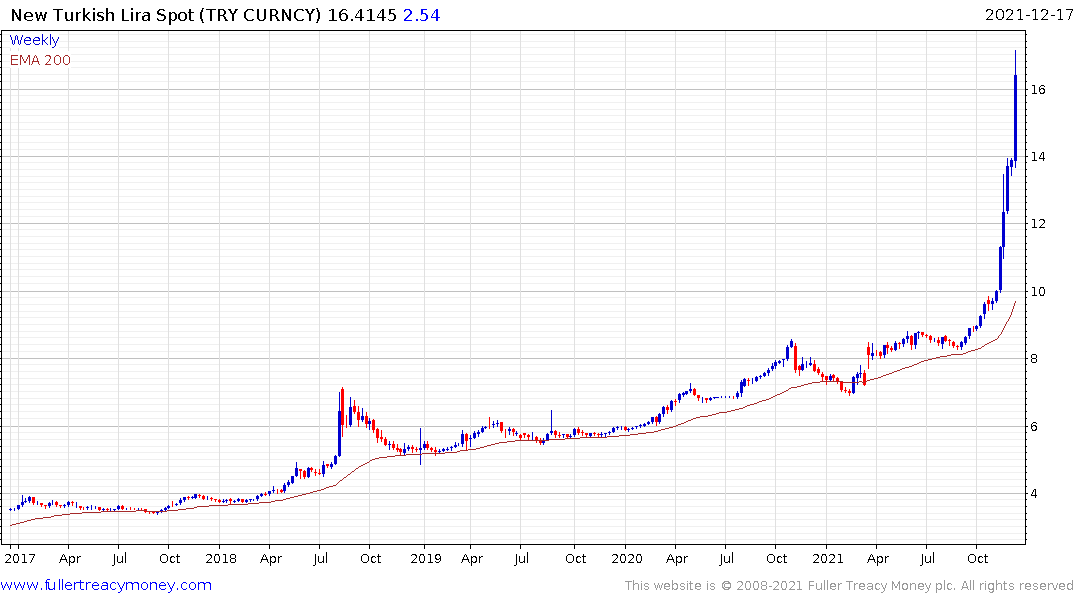 The Lira has halved since September and show no signs of stopping despite the acceleration.

The problem right now is the economy is falling victim to the political whims of a de facto dictator The parallels with Argentina are becoming progressively starker. Turkey needs to raise rates and until that happens, and in a significant manner, the malaise is likely to continue.