“Has the government finally heeded the calls from markets and the Bank of England? Price action in gilts and the pound suggests markets believe so,” said Simon Harvey, head of FX analysis at Monex Europe.

The plan to freeze corporation tax next year has come in for particular attention from detractors within Truss’s own Tories. Under a strategy set out by the previous Conservative administration, the levy on companies was due to rise to 25% from 19% in April. But scrapping that move was one of the key measures in Kwarteng’s fiscal plan announced Sept. 23.

The initial market reaction on Thursday suggests that a U-turn on corporation tax -- along with the bank’s greater buying activity this week -- could help ease any turbulence next week after the Bank of England halts its bond purchases on Friday. Investors will be focused on the details of the plans the government is drawing up, and that may determine whether the broad market rally can be sustained.

“Given investors are short, the reaction of sterling is not a surprise,” said Gareth Gettinby, portfolio manager at Aegon Asset Management. “Ultimately, the UK has an extremely negative external balance that remains reliant on foreign funding which remains a negative. So a short term bounce on government noise and then expect the currency to weaken.”

Confidence in the standard of UK governance has taken a beating recently. The government has few options when the bond market is throwing a fit at the prospect of modern monetary theory gone wild. They will inevitably have to walk back the commitment to lower taxes and will hopefully double down on deregulation. 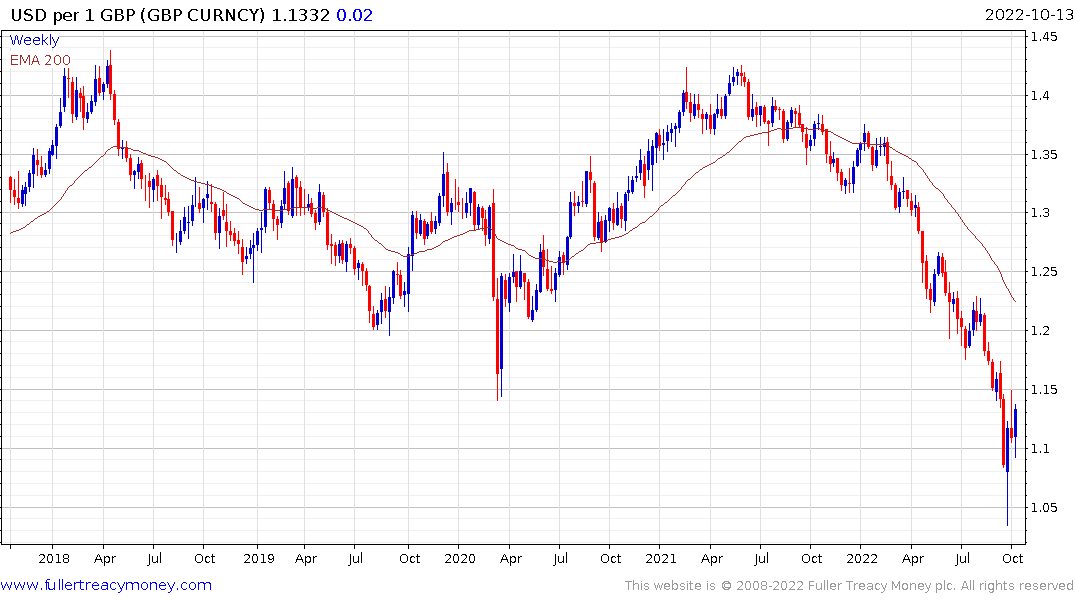 The Pound has now posted a higher reaction low and is approaching the most recent in the sequence of lower rally highs. Nevertheless, a sustained move above $1.20 seems unlikely.

A topic that appears to get little discussion in the media is a weaker Pound is not an accident but reflective of policy to support economic competitiveness. The trade deficit expanded to -£11.9 billion in January and has contracted to -$7 billion in August. A sharply weaker currency deters imports and boosts the potential for self-reliance and exports.

It’s not pretty and the toll on pensions is troubling but deregulation, a weaker currency and a future with a recovering global economy are all positives for the UK economy over the medium term.
Ultimately, the economy’s reliance on financial engineering will need to be addressed. Higher rates reintroduce a discount rate and boost compounding on long-term investments. That will ultimately solve a lot of the issues pensions have when the downward pressure on bond prices abates. We’re not there yet but crises sow the seeds for recovery.