We can see immediately that more production means a larger GDP and that more production requires more workers, ceteris paribus (that is setting aside other considerations that can affect employment such as automation, productivity etc.). Most of the workers in any country would be its nationals. So usually a country’s desire to raise its GDP has a lot to do with the wish to create more employment for its people. But I would argue that Japan’s situation is quite different.

Japan’s labour force is shrinking. It has been shrinking at the rate of 0.4% in the past decade and by all accounts the rate of decline will rise in the coming years. So unsurprisingly Japan’s unemployment rate is very low. Unemployment rate has fallen below 3% recently, which makes Japan’s unemployment rate among the lowest in the world. True, Japan still has a large source of untapped labour; women’s participation in the job market is very low. And that is a pressing issue but it is not really relevant to this discussion. Perhaps I might write about women’s participation in the job market one day but for now, regarding whether moving some manufacturing to the US isn’t such a bad idea, suffice to say that Japanese manufacturers are facing difficulties filling job vacancies in Japan because of Japan’s shrinking labour force and ultra low unemployment rate.

Japan’s challenge today is not about reducing unemployment. Japan’s challenges today are about coping with the social costs of and economic headwind from an aging population and a shrinking labour force.

So we see that the raison d’être for GDP is no longer that compelling for Japan. Japan should aim to maximise its gross national income (GNI) instead.

Japan is a case study for how other countries with substantial national assets, globally oriented manufacturing centres, aging populations and threatening deflation can cope and prosper.

The Bank of Japan’s policy of massive monetary accommodation is a major departure from everything it tried to reignite inflation previously, but the global conditions within which it is now practicing quantitative easing is also unique. Extraordinary monetary policy practiced by the other central banks has also acted as an enabler for the Bank of Japan’s efforts.

The weakening of the Yen would normally have encouraged investment in US Treasuries by the proverbial Mrs. Watanabe but the inverse correlation with the stock market that accompanied currency devaluation helped to initiate a self-feeding trend that is still underway. Central bank purchasing on equities is also a major positive influence on the market. 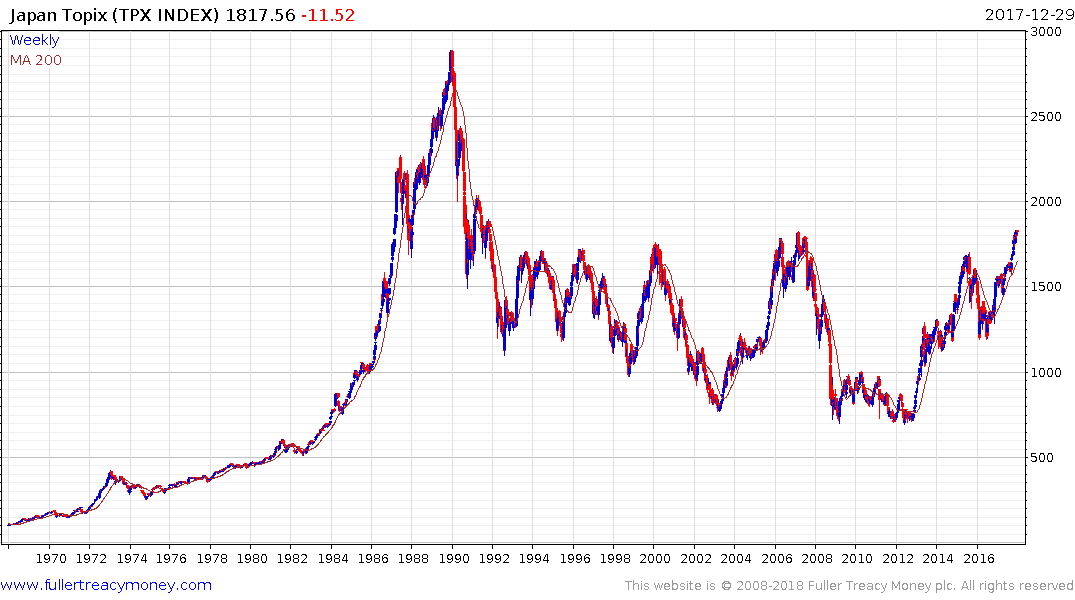 The Topix Index moved to a new 26-year high in December and that is a major consideration from the perspective of a long-term investor. Either it is going to improve upon that performance or it is going to fail. However, as the above article writer highlights, Japanese companies have many fine attributes and above all are trading at a discount to global markets.

That suggests the path of least resistance is upwards and most particularly in an environment where we have synchronised global economic expansion. 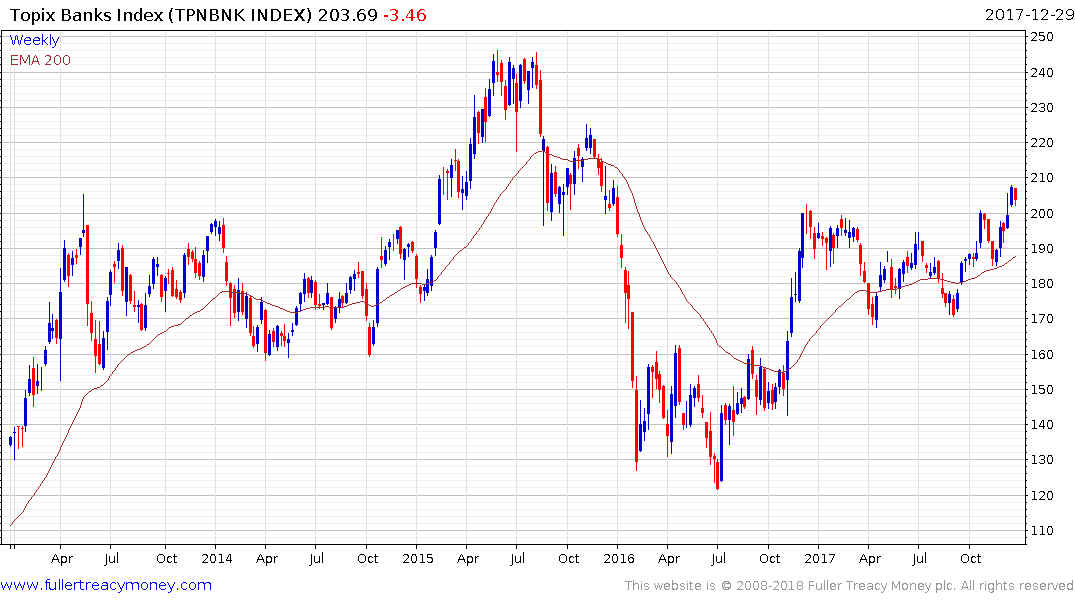 The Topix Banks Index continues to hold the move above 200 and a sustained move below the trend mean would be required to question medium-term scope for recovery.