The election of Donald Trump may allow banks to dodge the full impact of global regulators’ post-2008 crisis crackdown.

The Basel Committee on Banking Supervision is racing to complete a revamp of international capital standards by year- end. The U.S. has pushed for strict rules to protect against future market meltdowns, whereas Europe and Japan want to rein in proposals that could hit banks with billions in costs. Basel Committee members including the U.S. Federal Reserve and the European Central Bank are under enormous industry pressure to soften the rules.

Trump’s ascendancy and his vow to dismantle financial regulations could throw another wrench in the works. If he stalls U.S. implementation of the revised Basel Committee standards on how banks measure asset risk, or ignores them altogether, Europe could follow suit. And if the U.S. and Europe go their own ways, the last piece of the global response to the financial crisis could be undermined.

“I think that before Trump, Basel was going to be softened down significantly,” Sam Theodore, managing director for financial institutions at Scope Ratings AG, said in an interview. “And now with Trump, I think the whole thing is going to become more of a symbolic exercise.”

The memory of the crisis is fading, and “you have all the ingredients for the anti-regulation backlash to continue,” he said.

The international response to the twin threats of the US subprime credit crisis and the EU’s sovereign debt / banking crisis can best be described as reactionary. The first principles of regulation should be to create an equal playing field where risk takers are rewarded for their successes and punished for their failures. However rather than simplify the regulatory environment policy makers succeeded in creating an even more opaque system where the cost of compliance rocketed higher and where whole segments of a bank’s business became untenable.

The net result was that banks were forced to hold more Tier 1 capital, reduce leverage, restrict trading and be much more conservative in lending. A statistic just before the US election that private lenders overtook banks as the largest suppliers of mortgages last quarter for the first time highlights just how uncompetitive the sector has become as a result of the new regulations.

It is very much open to question whether the alternative to Dodd Frank will be any better for the banking sector. However the market appears willing to bet that if the incoming Republican controlled government wants to get credit moving and an infrastructure boom underway, having a banking sector in a position to lend to small businesses would help a lot with getting more vibrant economic activity underway. 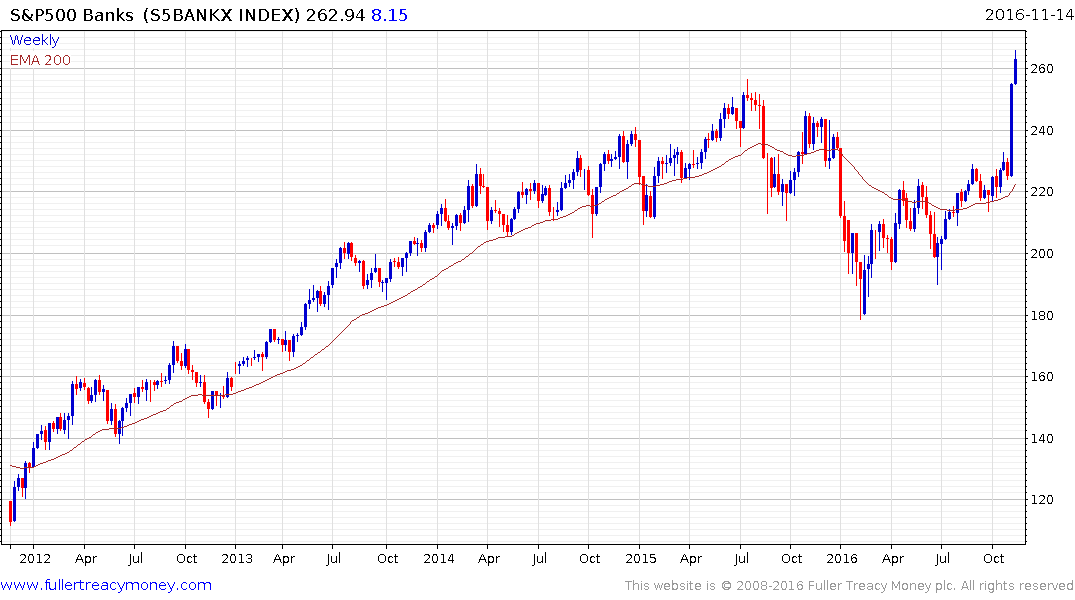 The S&P 500 Banks Index is not expensive at an historic P/E of 13.91 and yields 1.95%. With the prospect of more profitable businesses the sector has enhanced capacity for dividend growth, so there is potential for that yield to keep pace with interest rate hikes. The Index has held a progression of higher reaction lows since February but broke emphatically higher on last week’s election result. A short-term overbought condition is increasingly evident so there is scope for some consolidation, not least since the new administration will not be inaugurated until January 20th. However a sustained move below 230 would be required to question medium-term scope for continued upside. 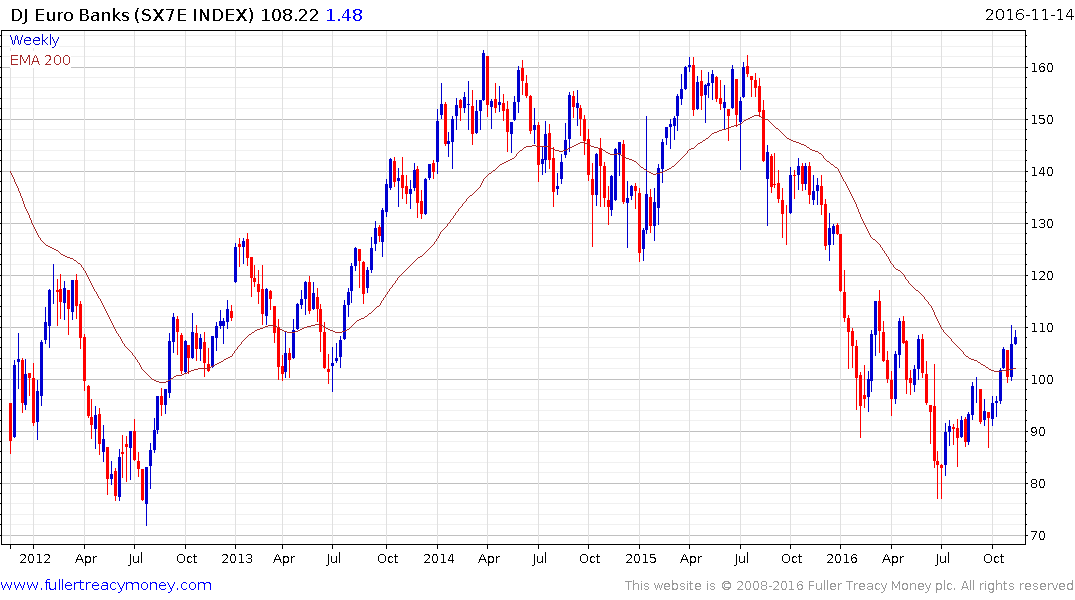 While obviously not benefitting from the quite the same enthusiasm about a fiscal boom, the Euro STOXX Banks Index has rallied over the last couple of weeks to break a medium-term progression of lower rally highs and has been aided by the relative weakness of the Euro. 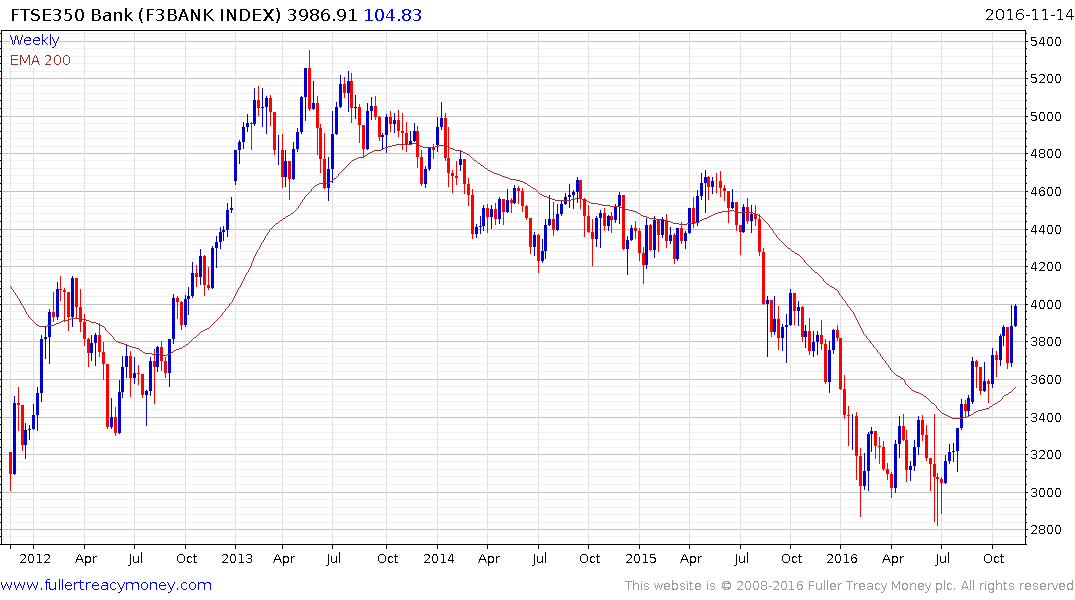 The UK’s FTSE-350 Index has outperformed, not least as a result of Sterling’s weakness and continues to hold a progression of higher reaction lows.