Trump Has China Where He Needs It
Comment of the Day

Trump Has China Where He Needs It by Eoin Treacy

“Water keeps the boat afloat but can also sink it” is a Chinese proverb that neatly summarizes the nation’s current economic predicament. The debt that has hydrated the Chinese financial system for the past 10 years is now drowning it.

During the darkest days of the financial crisis in 2008, China launched a 4 trillion renminbi ($593 billion in today’s dollars) infrastructure plan that was accurately described as pulling the global economy out of recession. This infrastructure stimulus plan never ceased, and by 2017 the 4 trillion of spending ballooned to 14 trillion, according to China’s National Bureau of Statistics.

At first, China benefited from the economic reforms of the 1990s, its ascension into the World Trade Organization and the resultant inflow of foreign investment by Western companies. By 2009, the previous decade of strong growth meant wages and price levels had risen such that China was no longer a low-cost manufacturer. This made it implausible that exports could drive economic growth. Therefore, China’s central bank printed money to fund a gargantuan stimulus program.

History tells us that growth that is funded by excessively rapid credit and money creation can lead to a variety of asset bubbles and to financial, credit and currency crises. A broad measure based on data from the People’s Bank of China and other agencies that includes both bank assets and shadow banking assets such as wealth management products, trust beneficiary rights and trust loans, places China’s total credit at $48 trillion, about 3.7 times its gross domestic product. That compares with $24 trillion for the U.S. despite China having an economy that is 37 percent smaller. China’s decade of rapid credit creation and investment spending has led to soaring property values, despite high vacancy, and low wage levels. These led to tepid export growth and a stagnating economy as the export industry lost competitiveness.

China has a mountain of debt that is concentrated in the regional banking sector and municipal governments. In attempting to wean the economy off of reliance on stimulus they have closed off successive avenues of credit ranging from interbank loans, P2P lending/shadow banking, US Dollar denominated debt. That withdrawal of credit has been one of the primary contributing factors in the underperformance of Chinese assets over the last 18 months.

With China appearances can very often be deceiving. The slowdown in car sales for example is in part due to the slowdown in consumer spending but is also a reflection of curbs on car ownership in an increasing number of cities. Combined these factors have contributed to worries about the health of the economy.

The campaign waged against the shadow banking sector is now complete with the net flows having been reversed late last year.

The one factor that could really cause trouble for the Chinese economy is if the administration can effectively ensure it does in fact collect the taxes it is owed. Right now, the bulk of taxation comes from VAT and employer taxes. Tax avoidance among employees is widespread. This article from The Economist may be of interest. Here is a section:

The finance ministry estimates that 187m people ought to be paying income tax. Yet a former finance official reckons that in 2015 only 28m people—just 2% of the population—did so. In theory, the income-tax reform on which the authorities are embarking, which the People’s Daily, the Communist Party’s main mouthpiece, is calling the most significant in the country’s history, is about narrowing the tax base, not widening it. The threshold at which tax becomes payable was raised from 3,500 yuan ($503) to 5,000 yuan a month on October 1st. The finance ministry says the number of people liable for income tax should fall to 64m as a result. But it also seems determined to make those who owe tax actually pay it—a change that could have dramatic implications for politics.

If the Chinese government does in fact start collecting more tax from another 40 million people that is going to represent a significant headwind to consumer demand. Since that is the case, it increases potential for the administration to ease elsewhere to soften the blow. 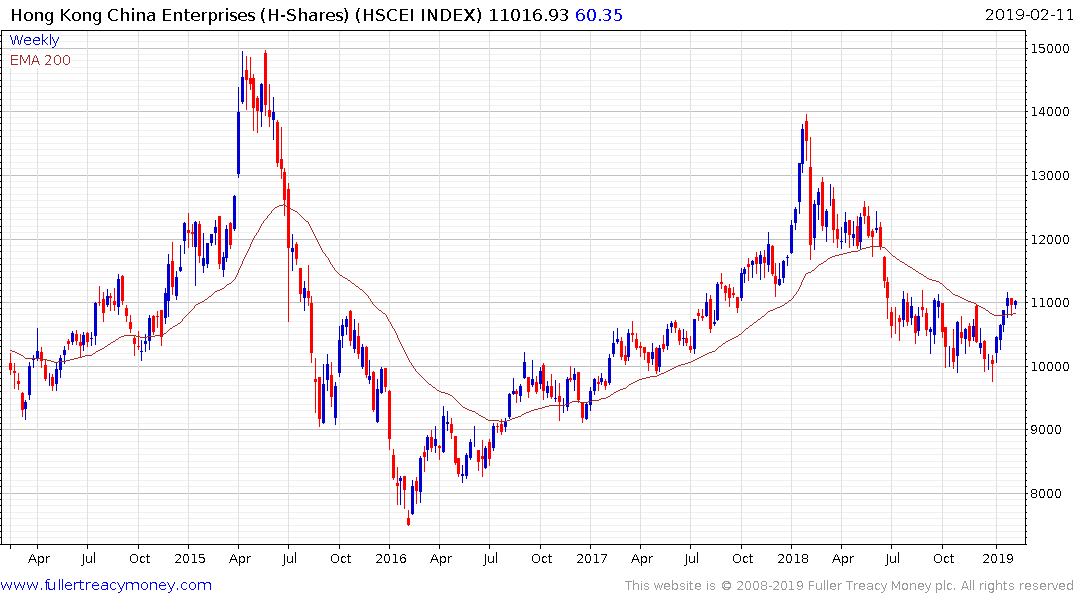 Meanwhile, the China Enterprises Index (H-Shares) in Hong Kong is testing the upper side of its seven-month range. A sustained move below the trend mean would now be required to question potential for a successful upward break.