Though the Fed met Wall Street’s hopes for aggressive action with its half-point reduction, Chairman Jerome Powell seemed to unnerve markets by saying it’s unclear how long the virus’s impact will last. Traders were already pricing in another rate cut later this month, with more to come in June.

“The market is trading right now on a lot of fear and uncertainty,” said Gary Pollack, head of fixed income at DWS Investment Management. “The Fed certainly didn’t bring calm, and the virus continues. The Fed’s relatively large move also made people wonder what they know that we don’t.”

The central bank’s decision came a few hours after Group-of-Seven finance chiefs issued a coordinated statement saying they were ready to act to shield their economies from the virus. Policy makers faced pressure to act after the OECD warned the world economy faces its “greatest danger” since the 2008 financial crisis.

The market is pricing in the assumption the US economy is going to lock up in exactly the same fashion as the Italian or Chinese economies did as coronavirus concern/paranoia spreads. There is no doubt the virus is dangerous for at-risk groups, but the bigger question is whether its effects will persist beyond the first quarter or perhaps second quarter, not least because warmer weather will likely curtail its spread as temperatures rise.

A more urgent consideration is today is Super Tuesday. The biggest issue investors are worried about is the potential Bernie Sanders is going to be the next President of the USA. The range of proposals he has tabled include breaking up the banks, financial services taxes, capping interest rates, breaking up internet and cable companies, Medicare negotiations for drug pricing, importing foreign drugs, capping prices, end health insurance, banning fracking, insist on 100% renewable utilities and railroads, cars and manufacturing. It’s very unlikely any of these will become law without the Democrats retaining the control of the House and also winning the Senate. However, President Trump has demonstrated just how much power the executive branch has and therefore there are grounds for worry. 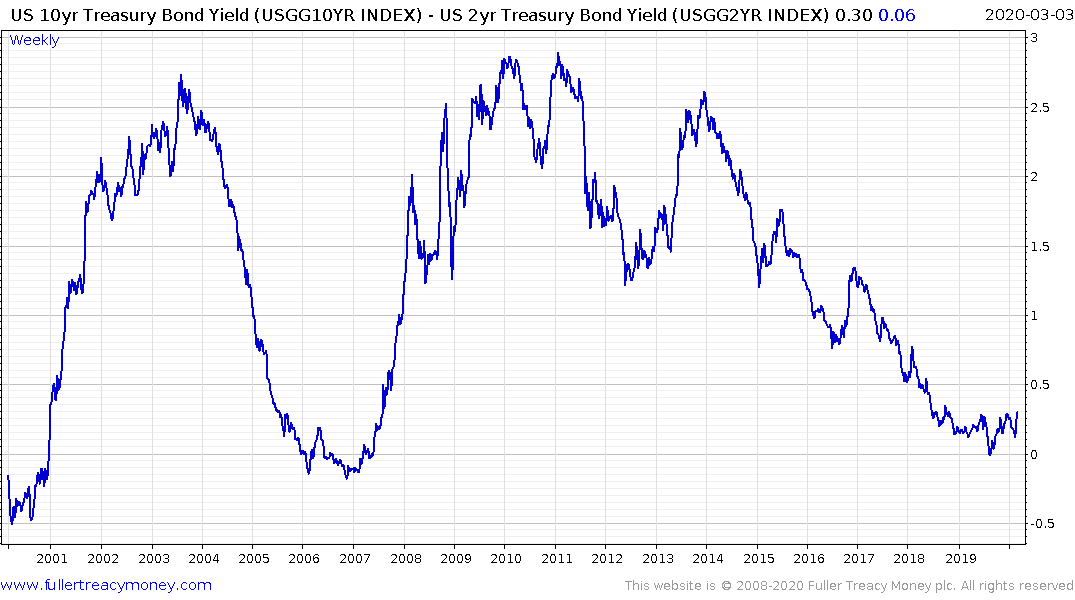 So far, the yield curve spread has been quiet but high yield spreads spiked to test the 2018 peak near the psychological 500 basis-point level last week. 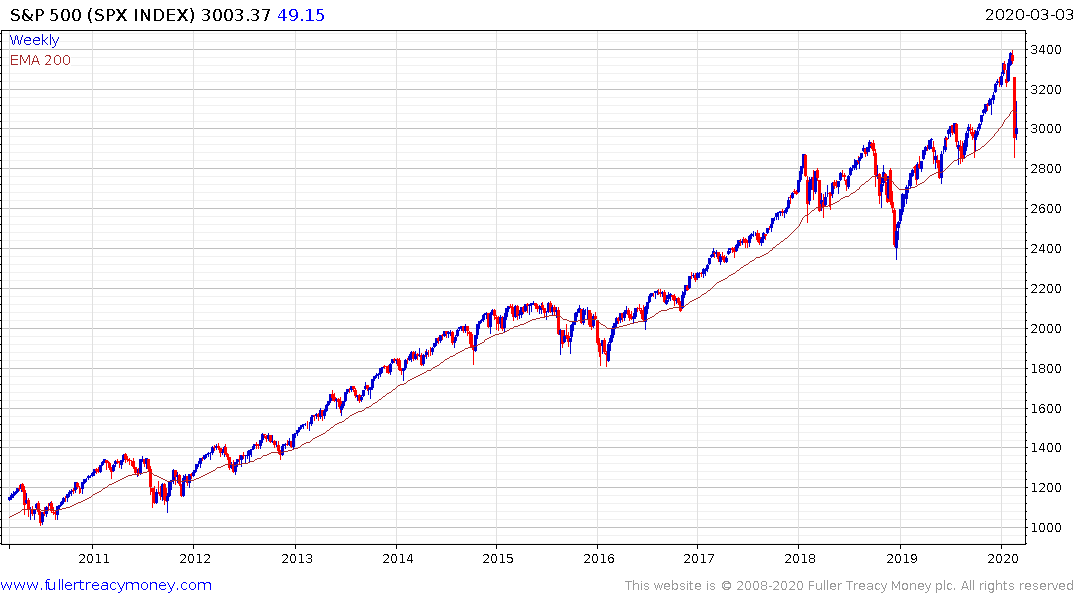 The S&P500 rebounded for two days and gave up about half its advance today. Generally speaking, emergency interest rate cuts are reflective of the central bank panicking because they fear a contraction. Investors tend to think of that as a lagging indicator because central banks are often late and the transmission mechanism between easier policy and it turning up in statistics is about six months. The Index is trading between 200-day MA and the 1000-day MA. It will need to sustain a move back above the former to confirm a return to demand dominance beyond some short-term steadying. 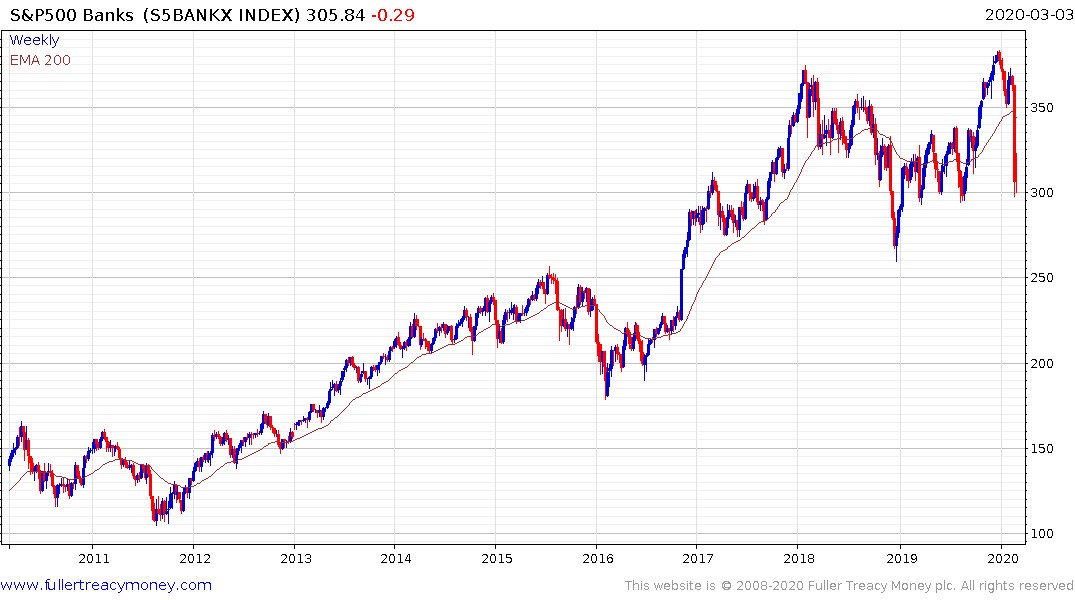 The S&P500 Banks Index gave up most of yesterday’s advance, not least because they are likely to see compressing margins in a lower interest rate environment. It needs to hold the 300 level if top formation completion characteristics are to be avoided. 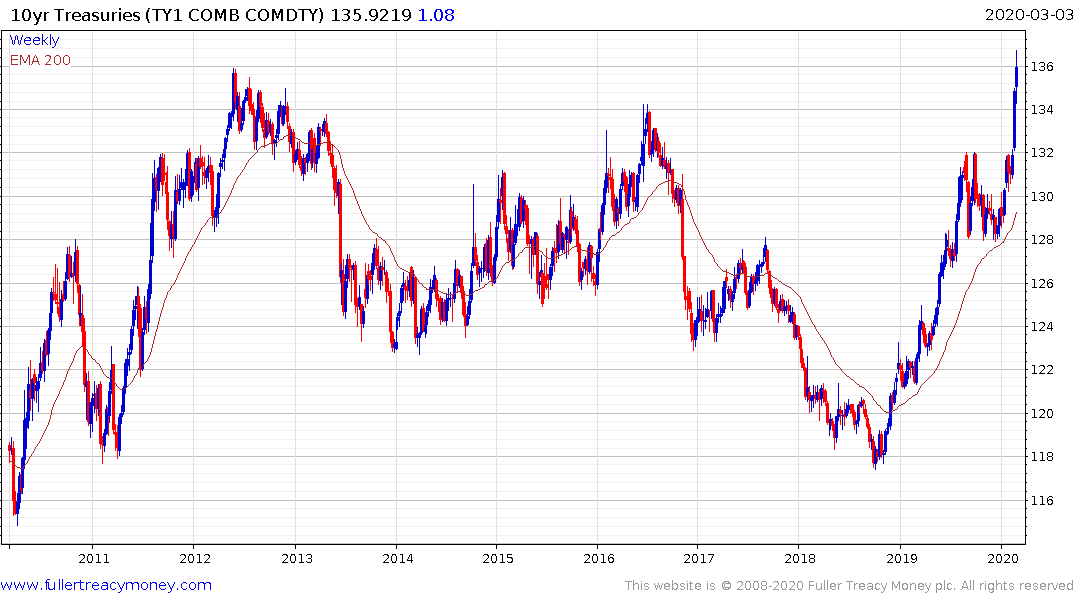 10-year Treasury futures surged on the upside today but we often see that the climax of an acceleration is marked by the largest upward dynamic of the move which was registered today. A wide overbought condition is evident as the price trades up to new all-time highs and some consolidation is looking increasingly likely.

Meanwhile China continues to peddle the story of a vaccine being tested on the military.