“There is inflation -- you can feel it, you can see it as a consumer -- now it’s starting to creep into the actual numbers,” said Michael Franzese, senior vice president of fixed-income trading at ED&F Man Capital Markets in New York.

The Federal Open Market Committee is “going to see these numbers, and hopefully we’ll get some kind of dialog.”

Traders are pricing in a 63 percent chance policy makers will raise interest rates by July next year.

The Fed is reducing its monthly bond purchases, while keeping the target for overnight lending between banks in the range of zero to 0.25 percent where it has been since 2008.

Officials signaled at their April 29-30 meeting that interest rates will stay low for a “considerable time.”

?Treasuries gained yesterday after the International Monetary Fund said it now sees the world’s largest economy growing 2 percent this year, down from an April estimate of 2.8 percent. The IMF left a 2015 prediction unchanged at 3 percent, and said it doesn’t expect the U.S. to see full employment until the end of 2017, amid slow inflation.

Consumers have been complaining about inflation for quite some time, not least because the price of anything normal people spend money on has increased. In such cases the hedonics employed by the Fed offer cold comfort. As inflation shows up in official statistics, the Fed’s overt courting of inflation appears to be finally seeing results. While this will put pressure on the Fed to follow tapering with a series of incremental interest rate hikes, it is also worth remembering that the Bank of England has had inflation figures coming in above its target for a number of years and is only now beginning to talk about raising interest rates. The Fed will probably want to see inflation figures remain robust before making an big decision.

While we could have a lengthy argument about discussion about the likelihood of the Fed raising rates the first or second quarter of next year, the bond markets have already stopped going up. The 30-year bull market has seen yields compress to previously unimaginable lows which was only possible through extraordinary intervention by the Fed. Without that guarantor as buyer of first and last resort, it is hard to argue that the market represents value. 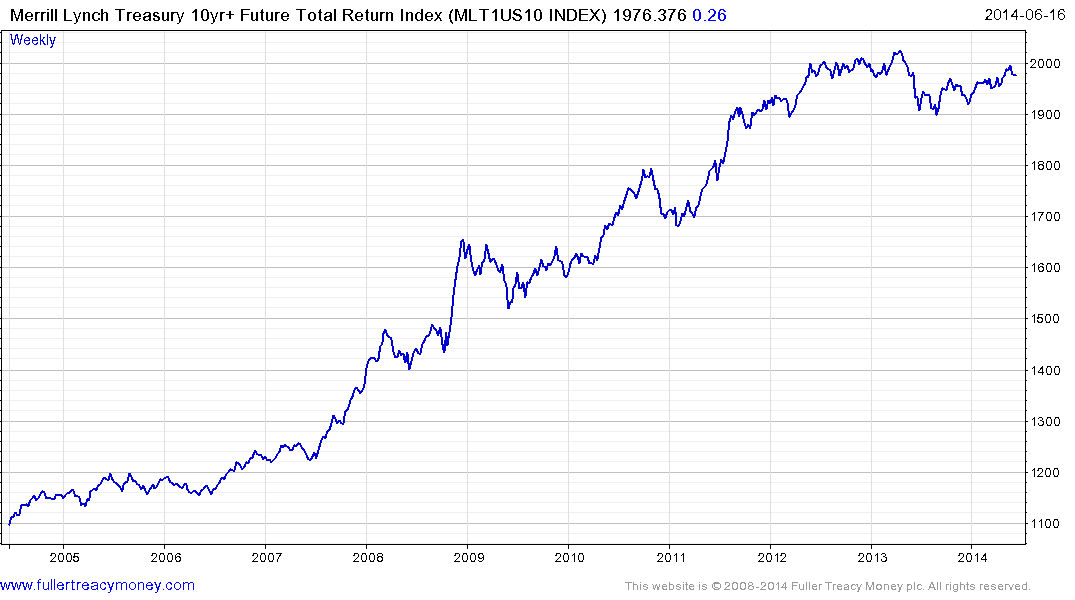 The Merrill Lynch 10-yr+ Total Return Index has spent two years ranging in what has the appearance of a developing top formation. 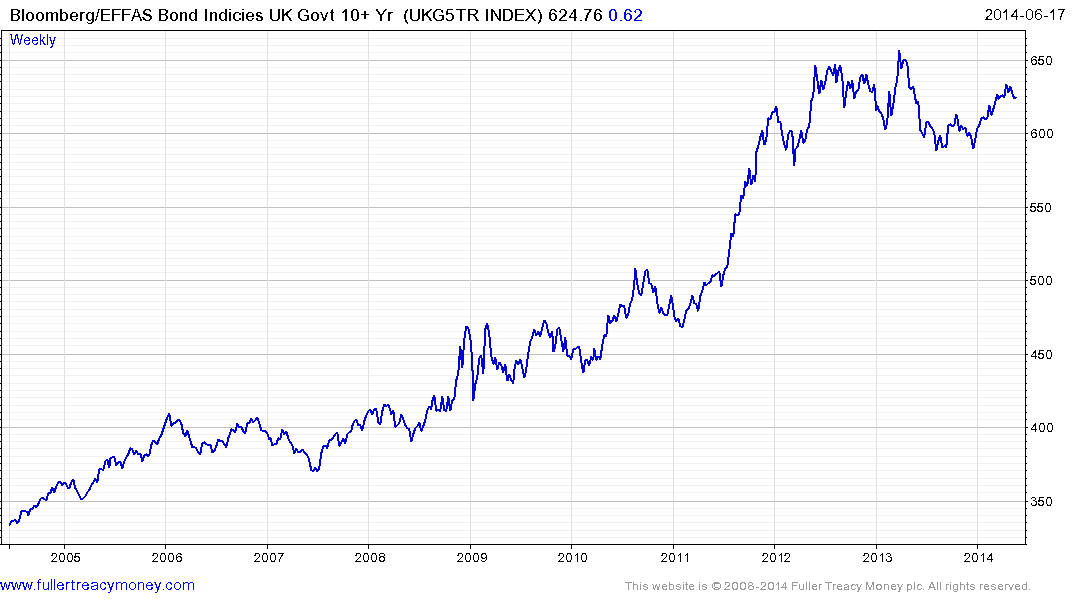 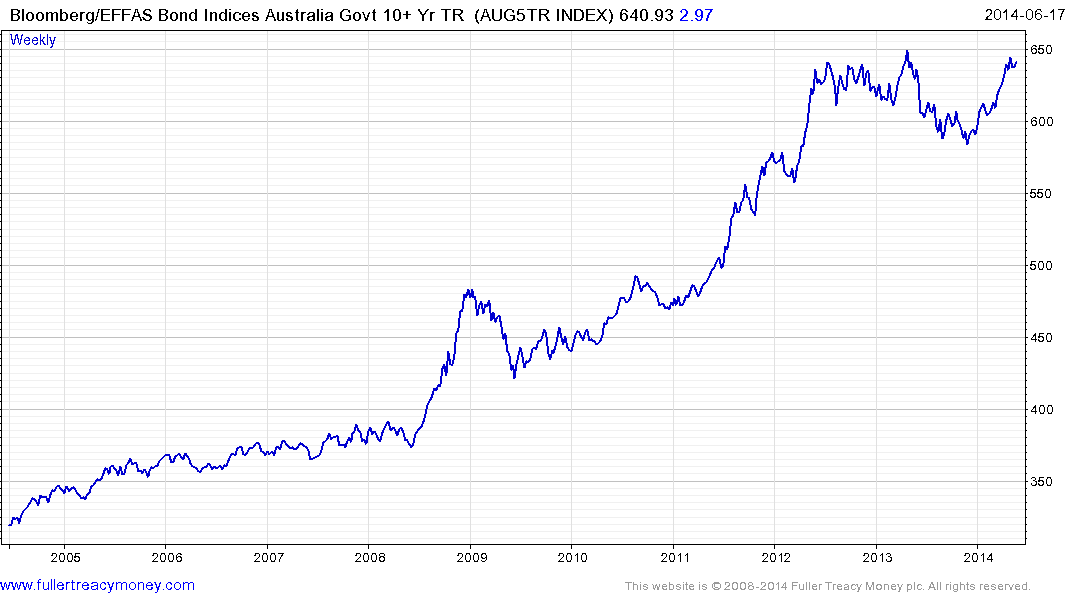 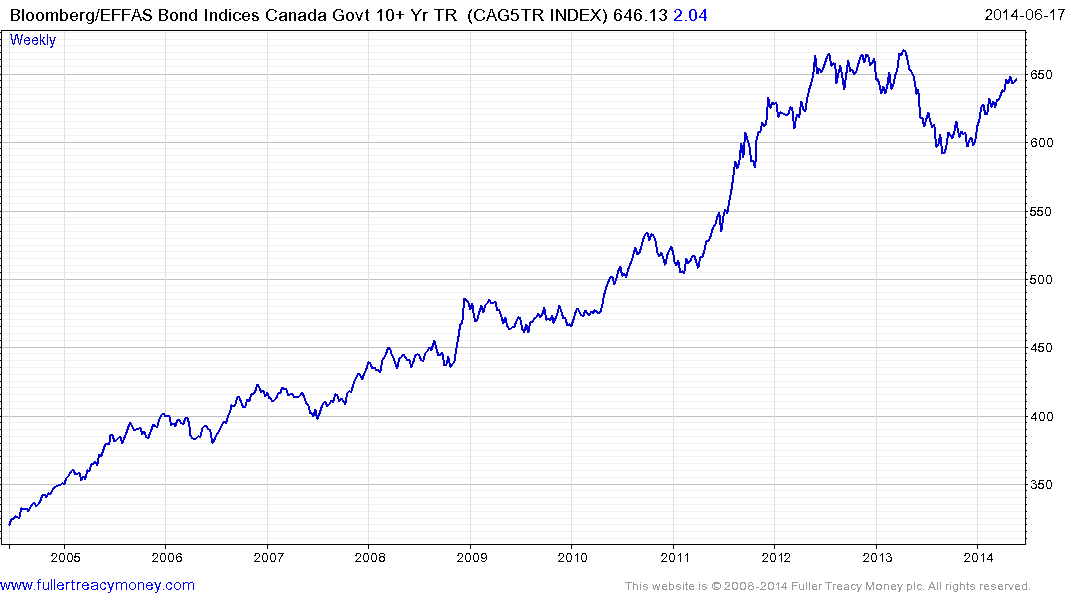 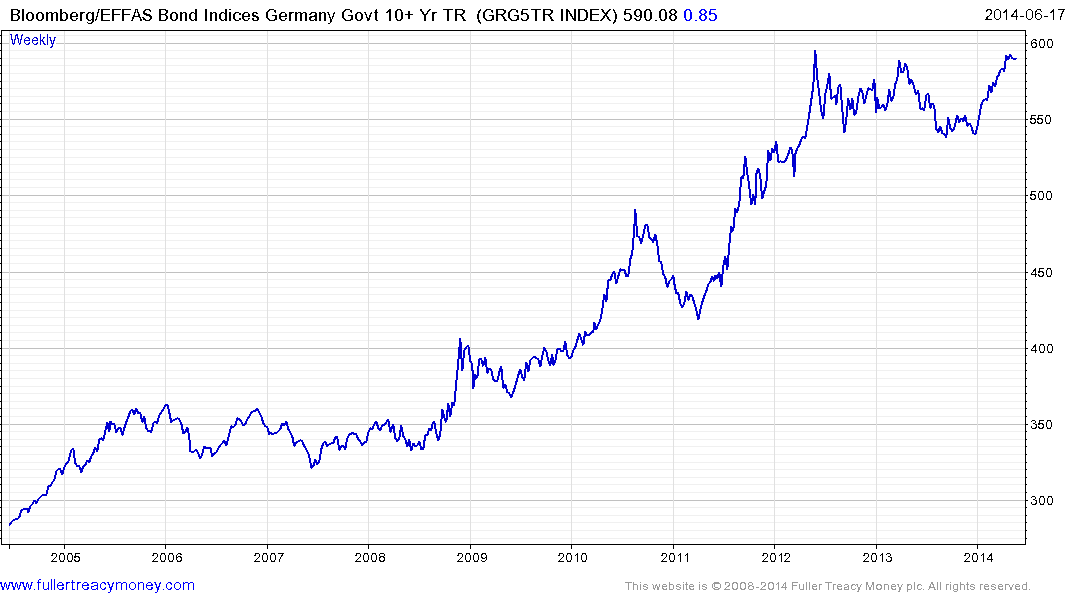 The German Index retested the upper side of its two year range last week but has encountered at least temporary resistance. 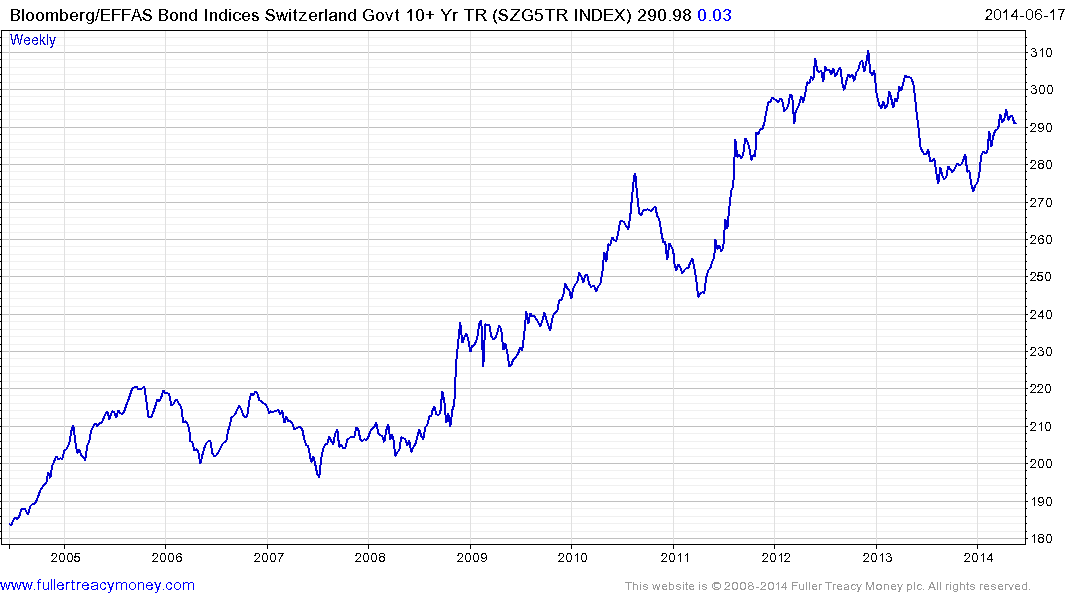 The Switzerland Index has exhibited a progression of lower rally highs over the last year which is the foundation of a downtrend. 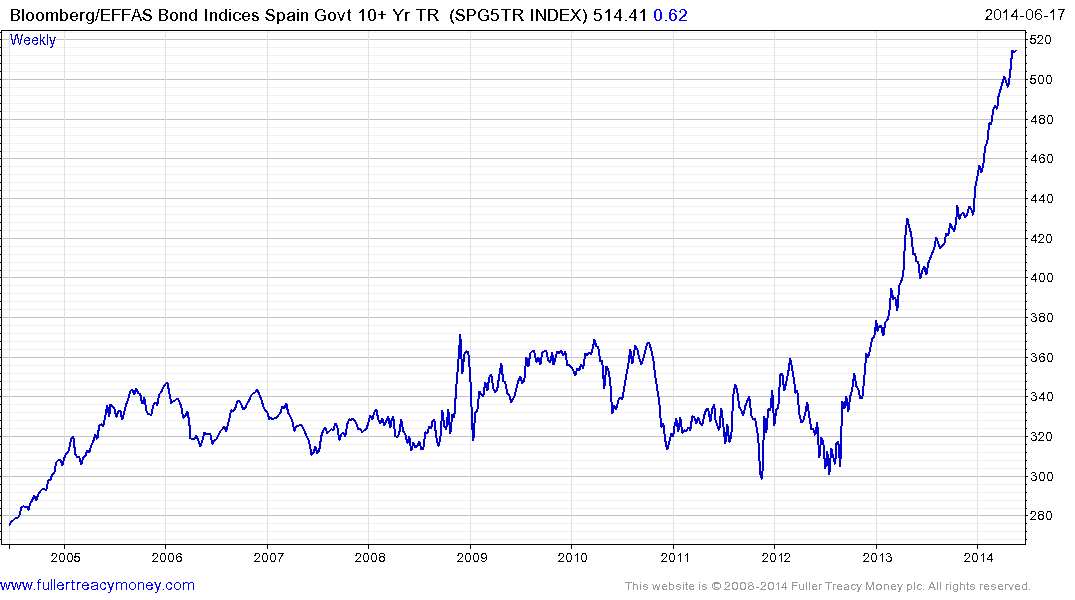 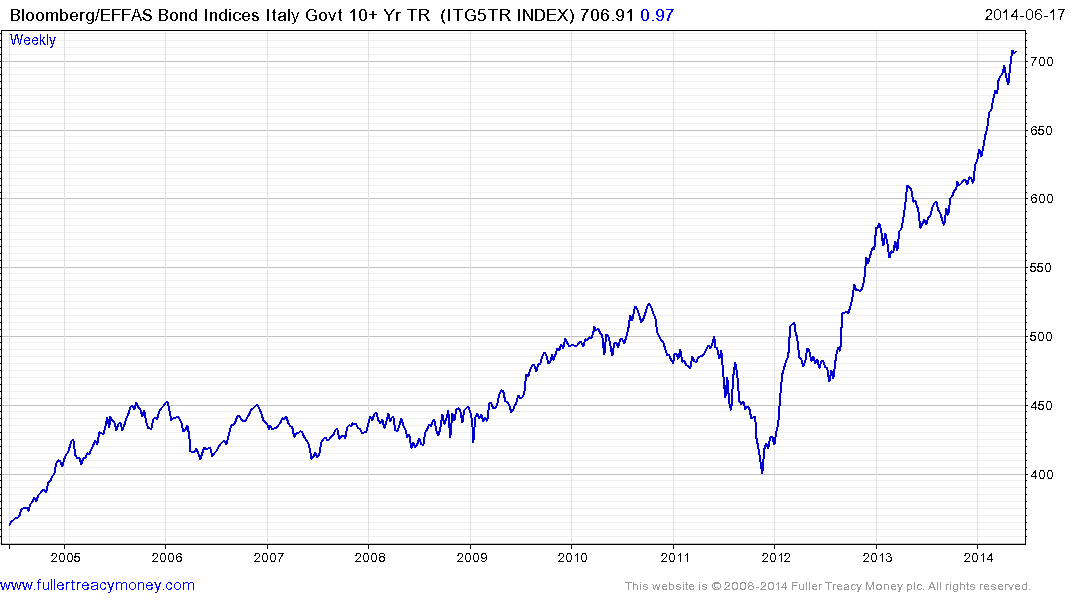 The Spanish and Italian indices continue to accelerate higher but with the German total return index as a potential area of resistance it is hard to imagine how much additional compression can be expected between the periphery and the core of the Eurozone. 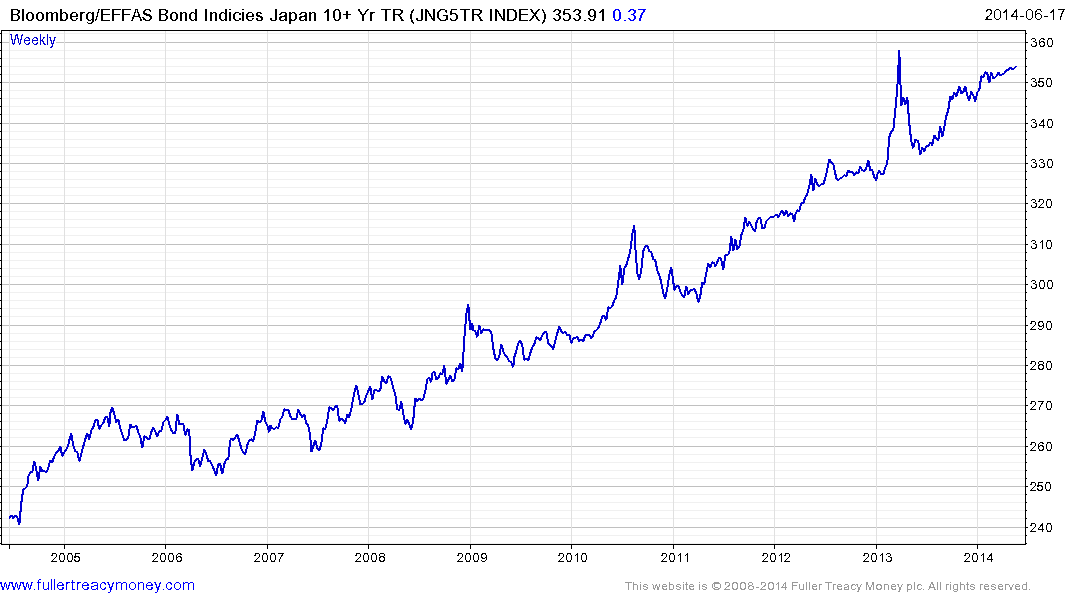 The Japanese Index continues to hold a progression of higher reaction lows as it approaches the 2013 peak. A break in this sequence would be required to confirm resistance in the region of 380.