The potential transaction is the latest example of U.S. buyers eyeing U.K. aerospace. Cobham Ltd., the U.K. defense contractor that was acquired by U.S. private equity firm Advent International Corp. in early 2020, has made a 2.6 billion-pound buyout approach for Ultra Electronics Holding Plc. The government scrutinized the first Cobham deal and said it would do the same for the Ultra proposal. TransDigm completed the acquisition of Cobham’s communications and navigation division in January, after competing with buyout funds for the unit.

The company’s balance sheet could support a deal of around $10 billion, analyst Sheila Kahyaoglu of Jefferies, told clients Wednesday. The deal could be funded in the debt market, but leaves a tight window and may require $1 billion of equity, she wrote in a report, adding: “This could have been one reason for an over the top bid if financing was not arranged yet.”

The UK has a world class aeronautics industry that is trading at fire sale prices because of the massive decline in civilian plane traffic. The pandemic has created a dislocation on par with 9/11 but has lasted for 18 months instead of 2 months. That’s forced companies to trim growth expectations and to sell off non-core assets in an effort to survive. That’s creating an opportunity for better capitalised longer-term investors. 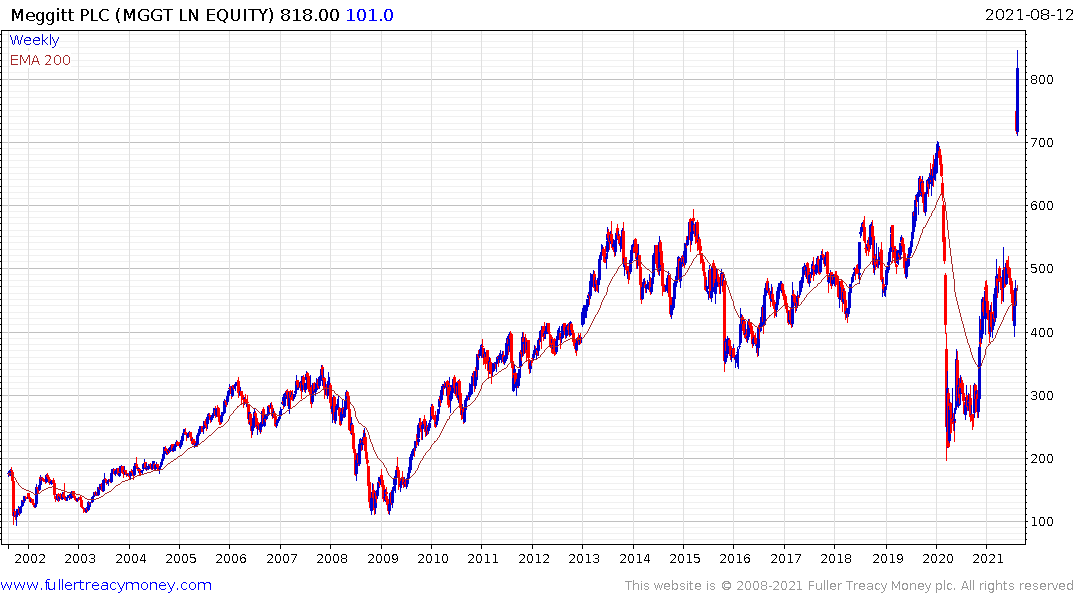 Ultimately the potential prize is two-fold. Air travel will eventually recover as we learn to live with the increasing chances of catching a respiratory infection. The second is that companies like Meggitt, Rolls Royce and BAE have been major contributors to privately held Reaction Engines increasingly advanced air breathing rocket design. https://www.reactionengines.co.uk/news/news/reaction-engines-secures-new-uk-government-funding-space-access-programme Gaining access to this program is the optionality attached to competitive bids for Meggitt. 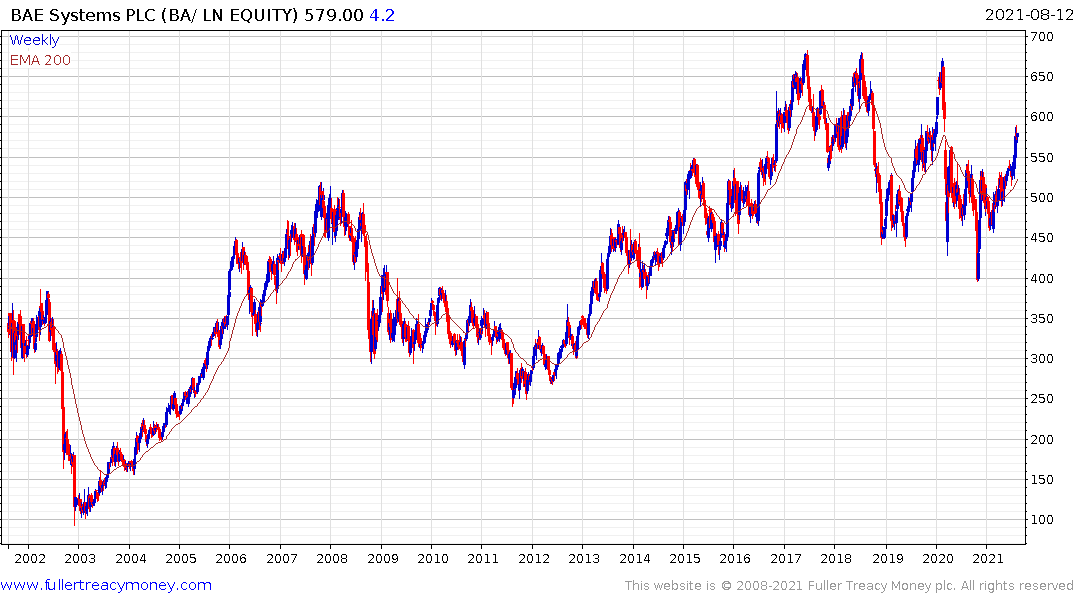 BAE System has been ranging in a volatile manner for five years and is currently rallying from the lower side of that range. 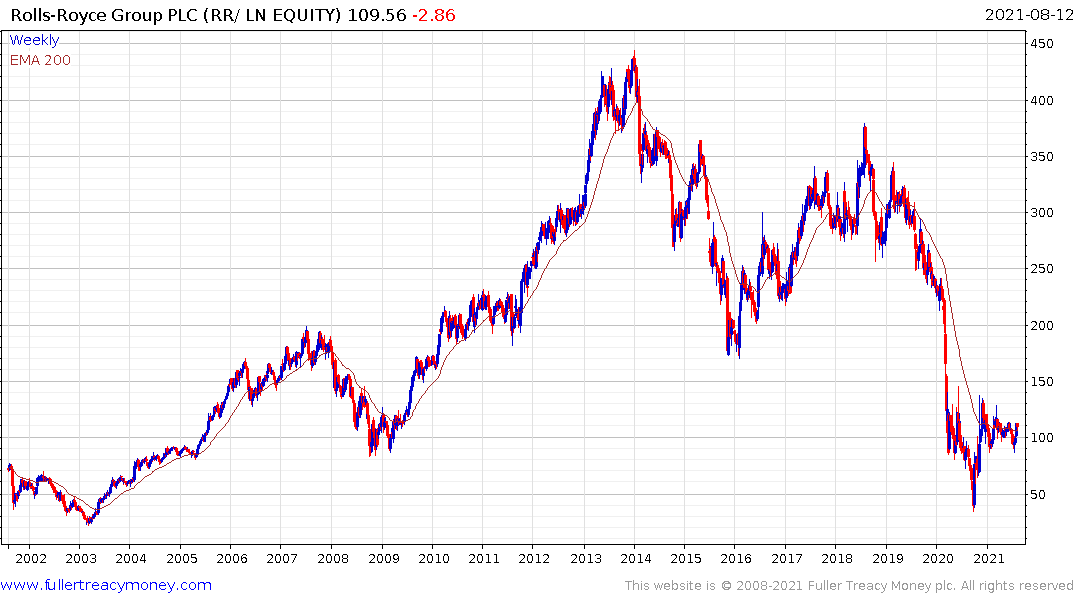 Rolls Royce continues to put in a first step above the Type-2 bottom but will need to sustain a move above 125p to confirm a return to medium-term demand dominance. 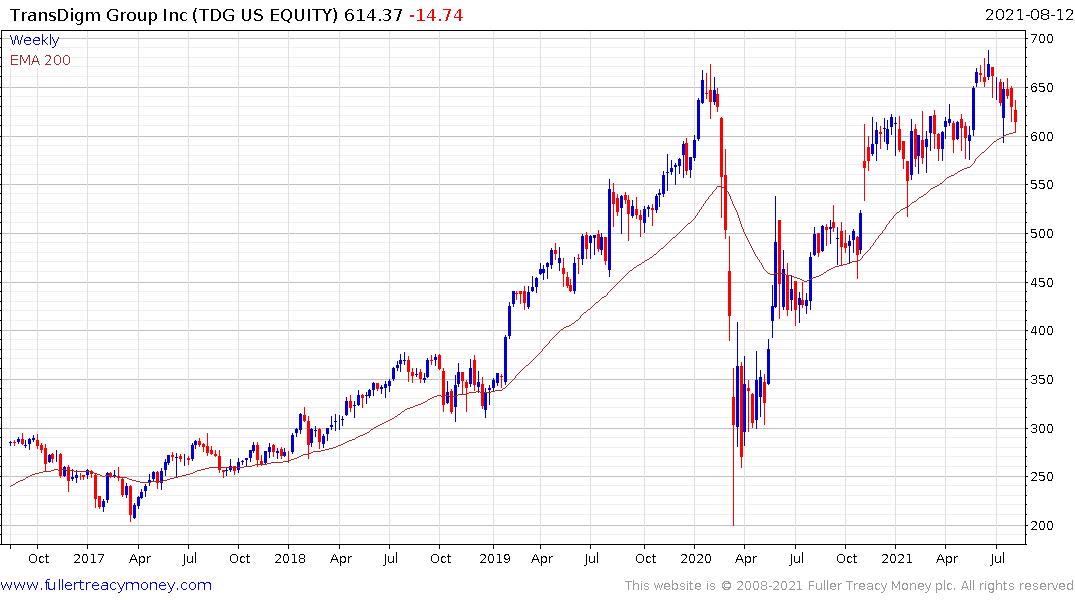 TransDigm continues to pause in the region of the 2020 peak.