Traders Are Getting Smarter About the Vaccine Race by Eoin Treacy

It's not clear how big a deal this particular pause is. Trial halts aren’t uncommon or a sure sign of a significant problem. Health care news publication Stat reported Wednesday that the participant received the vaccine and not a placebo, but it's possible that the volunteer’s illness — reported to be a spine condition called transverse myelitis — is unrelated to the shot. They may have already had the condition, or this could simply prove to be a singular outlier. The range of possible outcomes includes everything from a quick restart to a longer delay that could create concern about vaccines that use similar technology, including an effort from Johnson & Johnson and Russia's already approved shot. With just one event, the former seems more likely than the latter, especially given the latest news from the FT on the trial’s possible quick resumption.

The pause may slow enrollment in AstraZeneca's trial if it restarts, and may affect other efforts. It may also incline companies and regulators to wait for a bit more safety data before approval. That's not such a bad thing if it builds confidence in the eventual result. Still, halting to track down an answer is the responsible move for volunteers, the company, and the vaccine race.

It’s clear that the world must proceed carefully in developing shots intended for millions. While approved vaccines are very safe and companies working on Covid-19 candidates have reported few red flags in small early tests, the human immune system is complicated and unusual reactions do occur. Only large-scale trials on a diverse population can determine whether a particular shot is safe for general use and differentiate outliers from deal-breakers. Big tests are especially crucial in a pandemic scenario with less time for early research.

There are over 150 candidates for COVID-19 vaccines and we only need one to work. This is a massive proof of concept exercise for genetic solutions. The reason it usually takes years to come up with a vaccine is because of the process of using dead virus or growing weakened samples.

The new speedy solution relies on genetic solutions which have not been tested in the wider population. There is every reason to believe that the method is safe and stable but until we have field data of real- world applications across genders, racial and age groups we will not have a conclusive answer as to whether they are safe.

The stock market pulled back sharply last week on news of Softbank taking profits on its large options positions. However, it thought it was particularly interesting today, that the primary stay-at-home stocks rallied to lead the rebound on the Nasdaq-100. There has been some rotation underway for the last 10 days but even a whiff of a delay to the delivery of a vaccine resulted in traders stepping in to buy the dip. 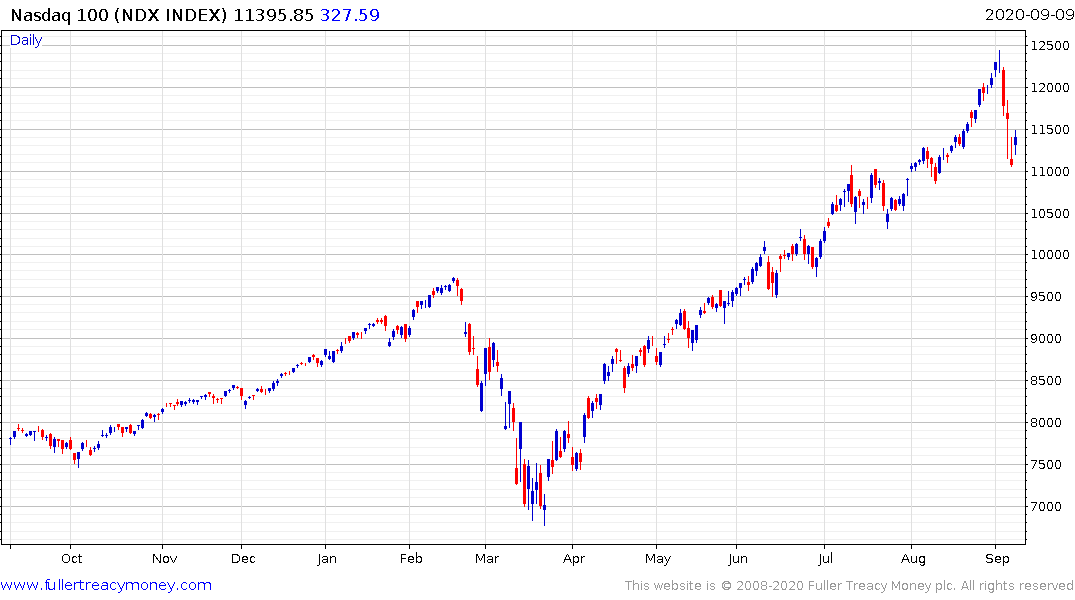 The Index has held the 11000 level which is the upper side of the most recent short-term range. While this setback is the largest since March, the sequence of higher reaction lows remains intact. The larger reaction is an inconsistency but it is not a terminal defect to the six-month move. 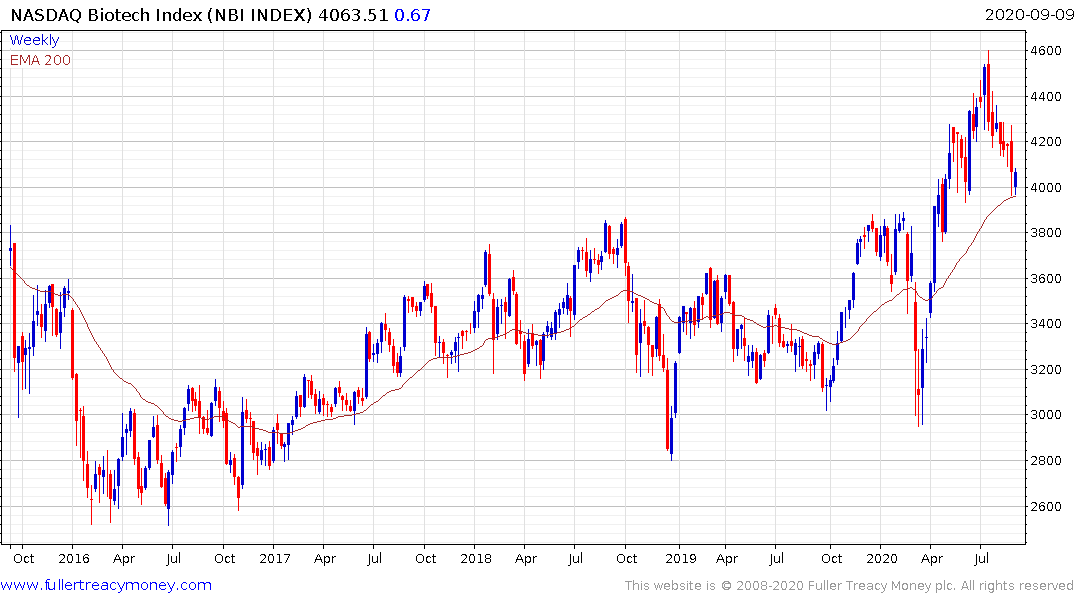 The Nasdaq Biotech Index continues to exhibit first step above the base characteristics and firmed today from the region of the trend mean.