Top Trades in Disarray Amid Emerging-Market Rout by Eoin Treacy

"I didn't see this escalation coming," Benoit Anne, the head of emerging-market strategy at Societe Generale SA in London, said by phone Jan. 24. "As a strategist, you want to give a directional view of the market, but this is made quite difficult by the large number of risk factors to account for."

In abandoning their top picks, firms are reacting to the sharpest slump in emerging-market currencies in five years. A Bloomberg index of the 20 most-traded exchange rates fell 1.2 percent last week, extending its decline over the past year to 9.4 percent, bigger than any annual slide since 2008.

More than a third of the most-traded emerging-market currencies have already fallen below forecasts submitted to Bloomberg. The lira, which dropped to a record today before recovering, is almost 5 percent weaker than the median year-end prediction of 2.2, while Mexico's peso slipped below Danske Bank A/S?¡¥s forecast of 13.45, the most bearish estimate of 41 strategists.

A point I have highlighted on a number of occasions when recording the Friday audio is that the complimentary appreciation of emerging market currencies and stock markets was unlikely to be as reliable in the next decade as it was in the last. As the era of extraordinary monetary policy comes to a close, the prospects for individual countries are being weighed more carefully and the consistency of trends in the emerging stock and currency markets have deteriorated. Competition in the currency markets, not least between Japan and its neighbours and among commodity exporters has contributed to the current bout of volatility.
Currency devaluation is a traumatic event while it persists as investors see the value of their positions decimated overnight. This often prompts selling which can have a contagious effect and further increases volatility on stock markets. We've seen a number of examples of this tendency in emerging markets over the last couple of weeks.

However, once the devaluation process ends, prospects for the relevant economy improve because it has been handed a new competitive edge in manufacturing and exports, while the incentive to purchase imported goods is diminished by higher prices.
The key question from an investment perspective is to identify when the devaluation process has ended. This means that countries such as South Africa, Turkey and Argentina are becoming interesting once more, but a more relevant example at present is Vietnam. 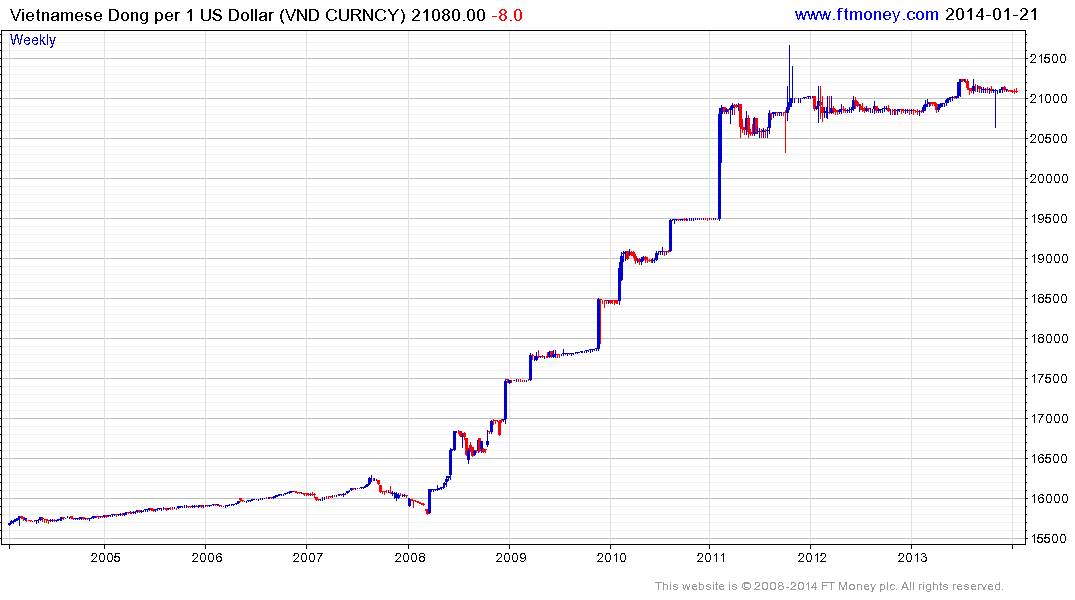 The Vietnamese Dong fell from VND16,000 to VND21,000 against the US Dollar between 2008 and 2011 and has held firm at the latter level since. The process of devaluation reflected some inherent weaknesses in the Vietnamese economy and prompted reform of the state regulatory apparatus in order to stem the decline. 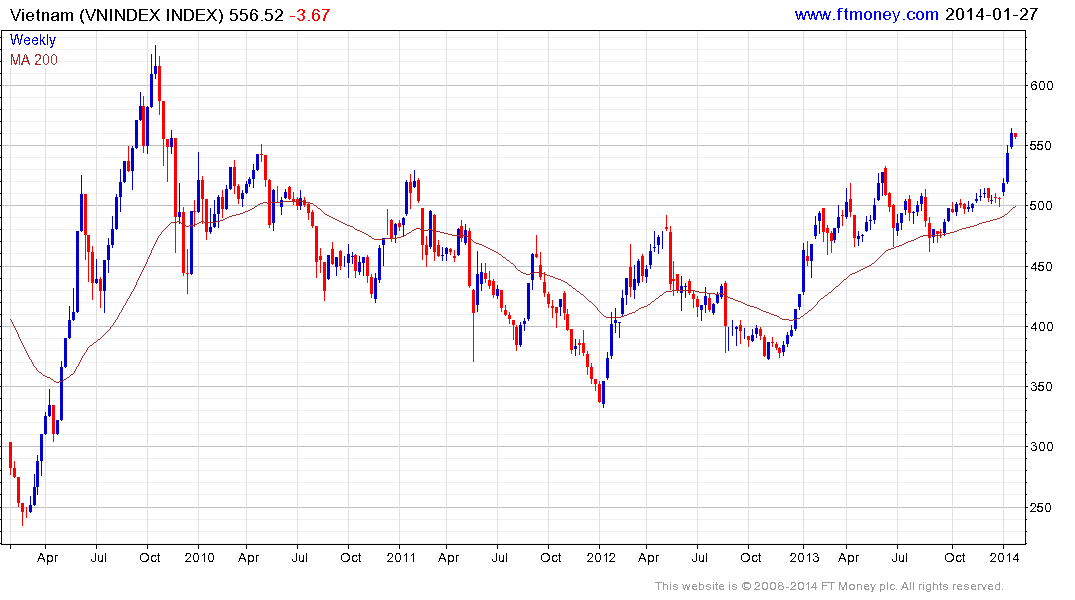 The stock market rallied to break its medium-term progression of lower rally highs a year ago and completed its first step above the base earlier this month. While somewhat overbought in the short-term and susceptible to some consolidation, a sustained move below the 200-day MA, currently near 500, would be required to question medium-term recovery potential subject to the trend of governance improving.

Viewed through this lens, the currency devaluations currently ongoing in a number of emerging markets could provide attractive entry points for investors once the currencies stabilise. They would be all the more alluring if they are accompanied by commitments to improve standards of governance.