“Looking at Europe, expectations for business sentiment increased when the inoculation rate reaches about 20-30%,” said Masashi Samizo, a senior market analyst at SMBC Trust Bank Ltd. in Tokyo. “Japan is still in single digits, but the trend is clearly accelerating.”

To be sure, vaccinations for professionals in Tokyo still seem far off, with little indication when they might get shots. While Japan has administered just 7 million first and second doses in a country of more than 126 million, compared with almost 60 million in the U.K., the pace has begun to increase as more local authorities in charge of vaccinations start to spin up their programs.

Japanese Prime Minister Yoshihide Suga surprised many earlier this month when he gave a formidable target for the country to achieve 1 million inoculations a day, seeking to finish administering doses to the country’s 36 million over-65s by the end of July. While around 86% of municipalities have said they expect to finish by that date, it’s unclear if the pace, which per capita would match some of the best days in the U.S., is realistic.

But the stock market’s mood has definitely changed for investors like Naoki Fujiwara, the chief fund manager at of Shinkin Asset Management in Tokyo. “It’s starting to feel real, whereas just a few days ago I was wondering when it would begin,” said Fujiwara, who expects the Moderna approval to support the market. “Should vaccination expand in the next month or so, Japanese stocks could rebound strongly again.”

Most of the island nations that successfully limited exposure to COVID-19 by cutting themselves off from the world have lagged in accessing vaccines. That has delayed economic recovery and the reopening of borders. For Japan the question of open borders is particularly pressing since they had hoped for a tourist influx with the Olympics. That missed opportunity is probably the motive force behind vaccination enthusiasm today. 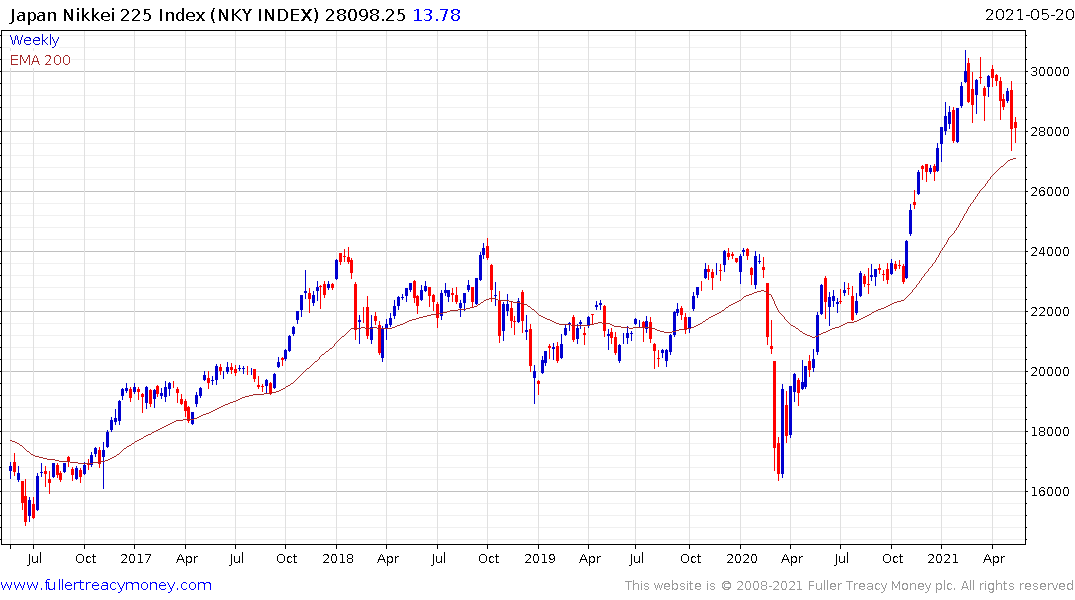 The Nikkei-225 is currently firming from the region of the trend mean. It has been pausing below the psychological 30,000 year-to-date but this does not look like anything other than a consolidation within the broad long-term recovery. 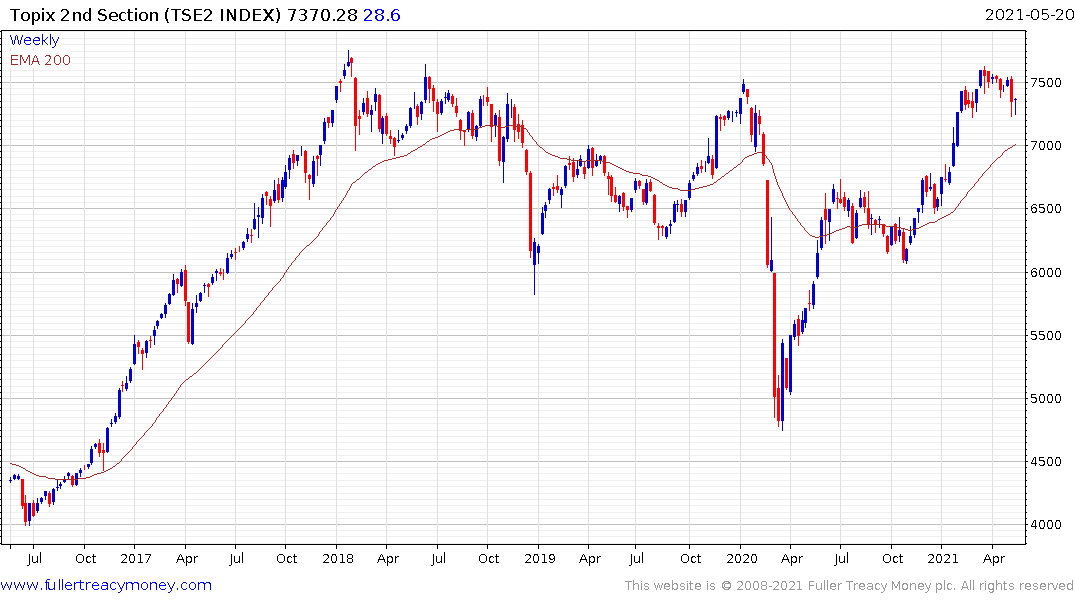 The Topix 2nd Section Index is also steadying in the region of its peak and the trend mean. 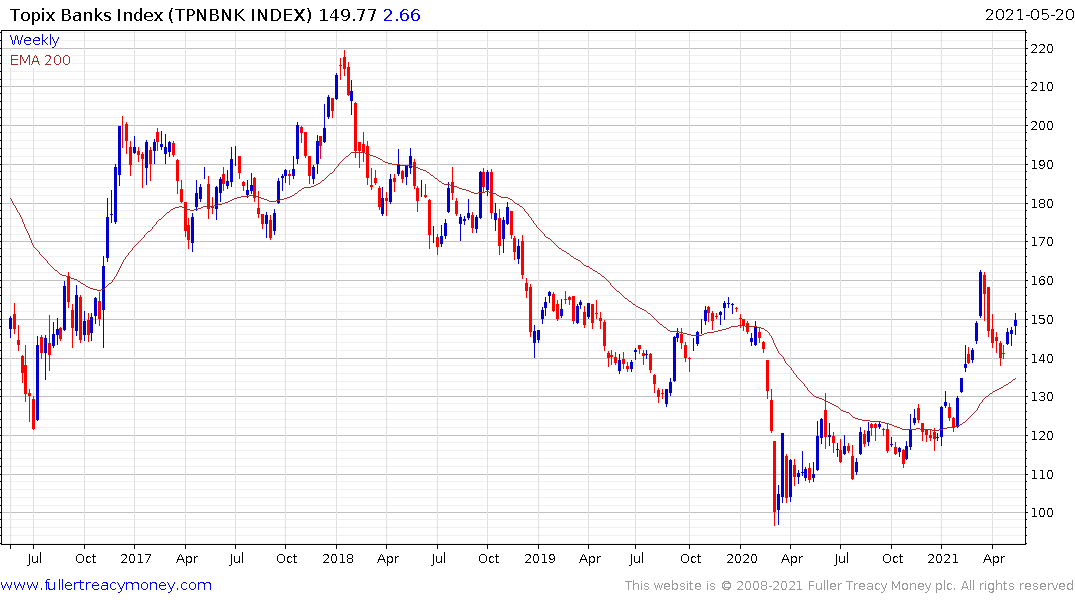 The Topix Banks Index took a significant hit following the Archegos liquidation but it found support in the region of the trend mean and is now rebounding. 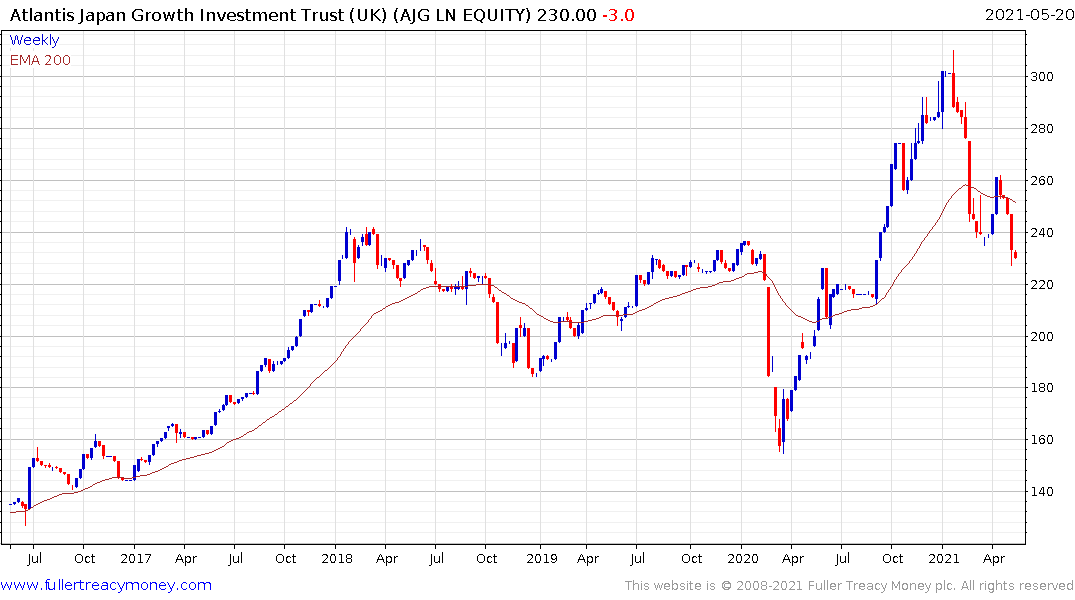 Against the background of nascent recovery in Japanese assets the Atlantis Japan Growth Fund is going in the opposite direction and broke downwards to a new reaction low last week. That underperformance may be because of the fund’s concentration on growth stocks which have universally taken a hit as bond yields rise. Interestingly, the JPMorgan Japan Small Cap Growth & Income plc has a similar pattern which suggests a similar portfolio mix. 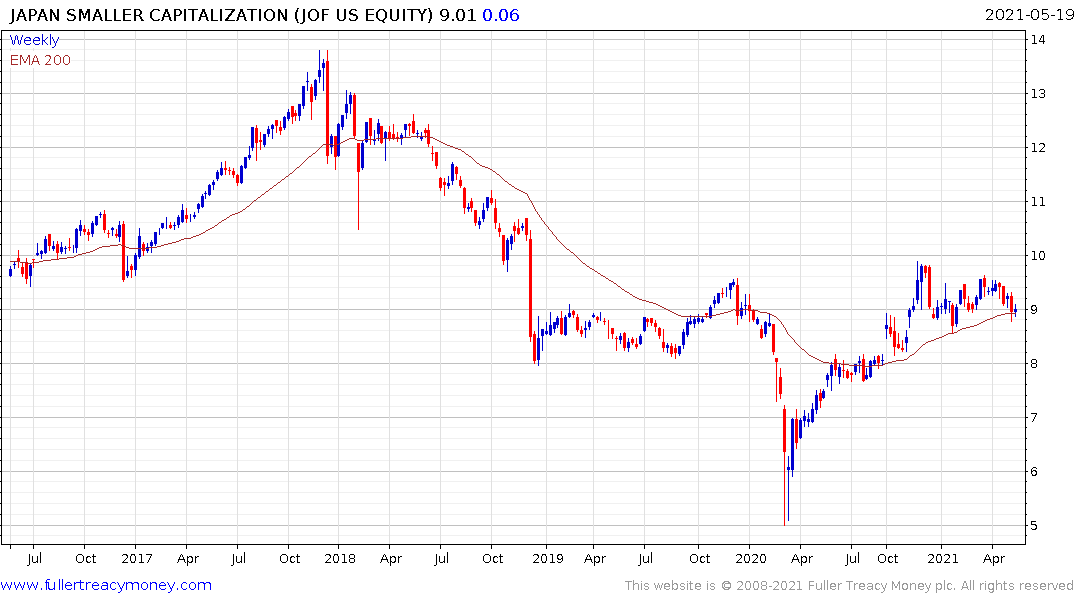 Meanwhile the Japan Smaller Capitalization Fund is firming from the region of the trend mean.