Tilting The Odds In Your Favour
Comment of the Day

Tilting The Odds In Your Favour by Eoin Treacy

It may come as a surprise to learn that Tel Aviv (Israel), Vilnius (Lithuania), and Tallinn (Estonia) all rank in the top 50 cities in the world in Fintech. You may not yet have heard of many of their leading companies, but I’ll wager you will in the coming decade. Lithuania ranks number one in the world in terms of broadband speed and in the top five countries for Fintech innovation. Investment in the right infrastructure has given that country a head start it is not wasting.

Access to capital and need for less of it in today’s capital-lite, ‘free money’ world means more and more entrepreneurs, the geniuses who will lead the exceptional companies of tomorrow, no longer feel anchored to the US. 20 years ago, fewer than 15 per cent of Chinese students studying abroad felt compelled to return home, filled with ideas but lacking the capital to fund their ambitions. Today closer to 80 per cent see a much more favourable environment in which to put their western education to profitable use domestically.

Adding to the earlier comments on the popularity of the Hong Kong stock market, companies are increasingly eschewing an ADR listing entirely, preferring a Hong Kong local listing, with exchange regulators encouragingly supportive. For the Chinese company of the future, a dual listing may well mean H-shares (HK) and A-shares (mainland China).

There is an exceptional amount of competition for attention in today’s market. The wall of money printed in the last year has refocused attention on relative performance of assets. Interest rates and currency movements play a big part in how well international assets fare versus US assets. That’s particularly relevant for large pools of US capital that have mostly stayed at home over the last decade.

That kind of thinking occurs in every market. At the Sydney Chart Seminar in 2008, one of the delegates asked what was the purpose of investing abroad when the Australian Dollar was so strong? It was a relevant point. Most investors tend to have a domestic bias and will generally only buy domestically listed assets. That’s why there are so few services that focus on international markets. To encourage people to look further afield there has to be a clear undeniable rationale. A weak domestic currency is a big incentive to seek returns abroad. International investors like the currency, yield and trend on their side. 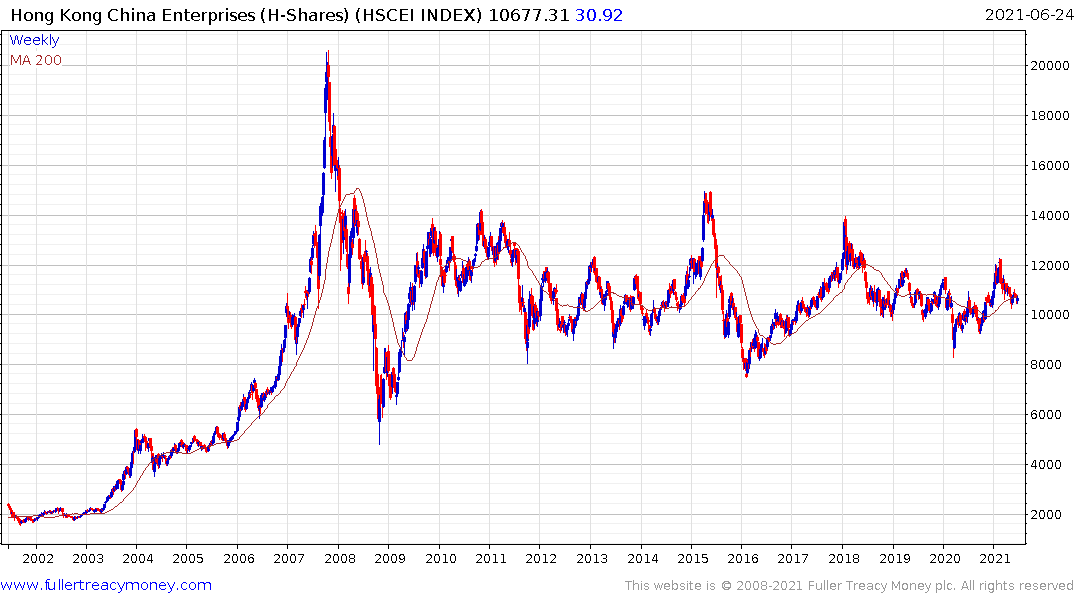 China’s H-Shares have been rangebound for 13 years and there are a lot of uncertainties about the status of Hong Kong as an international money centre going forward. It seems like one new economy sector after another is being targeted by the Chinese government, with the tutoring sector being the latest to be taken to task. That suggests the only sectors that are realistic to invest in have to be government sponsored. Today, that is semiconductors and possibly health. 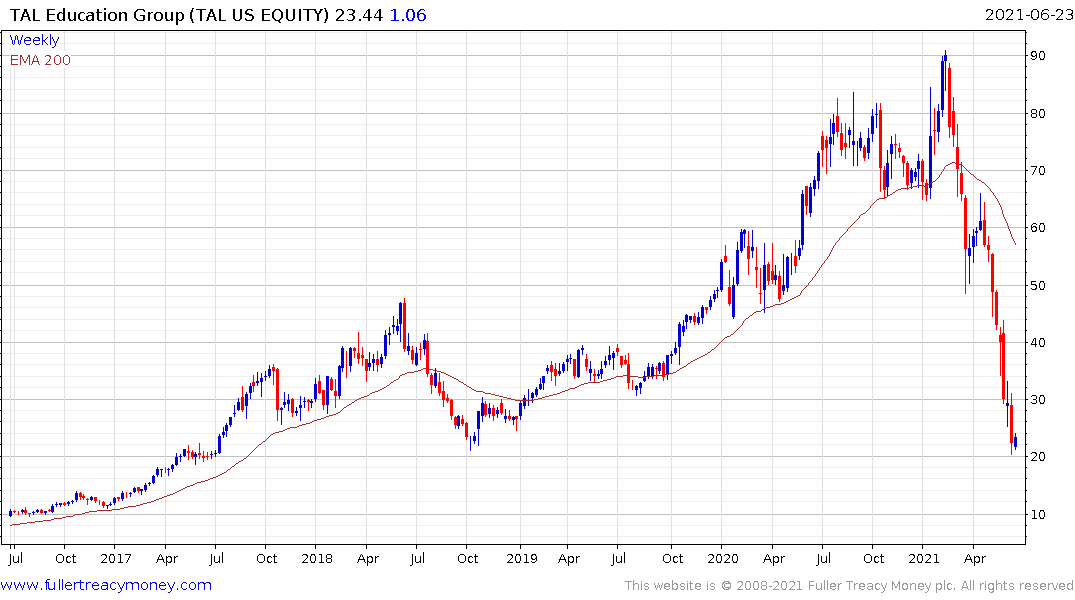 The interface between healthcare and technology is a global growth theme and not least because there is a chronic shortage of doctors. 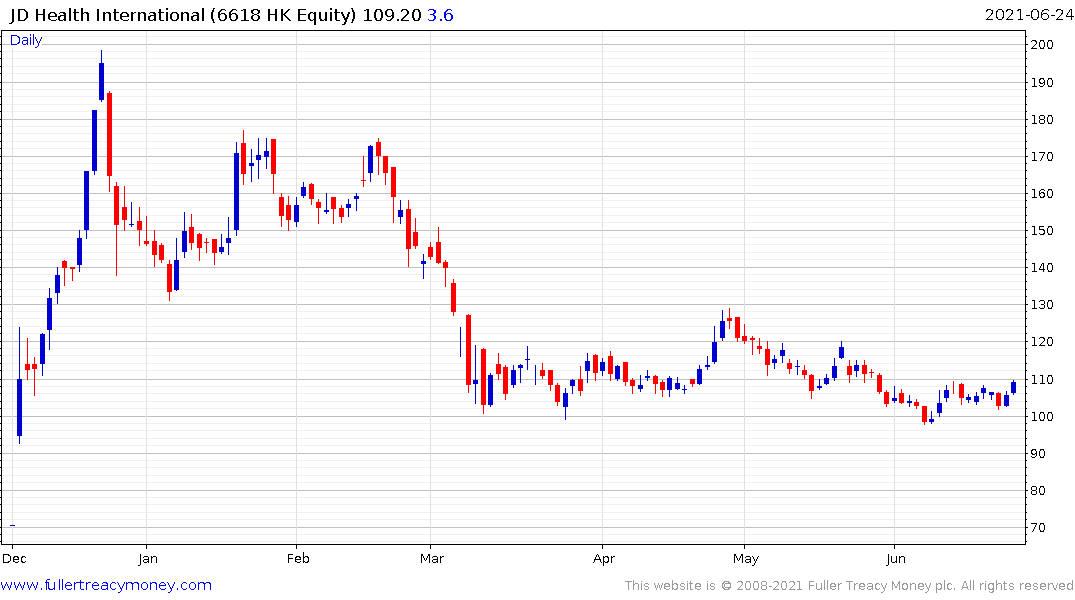 JD Health is back testing its IPO price around HK$100. 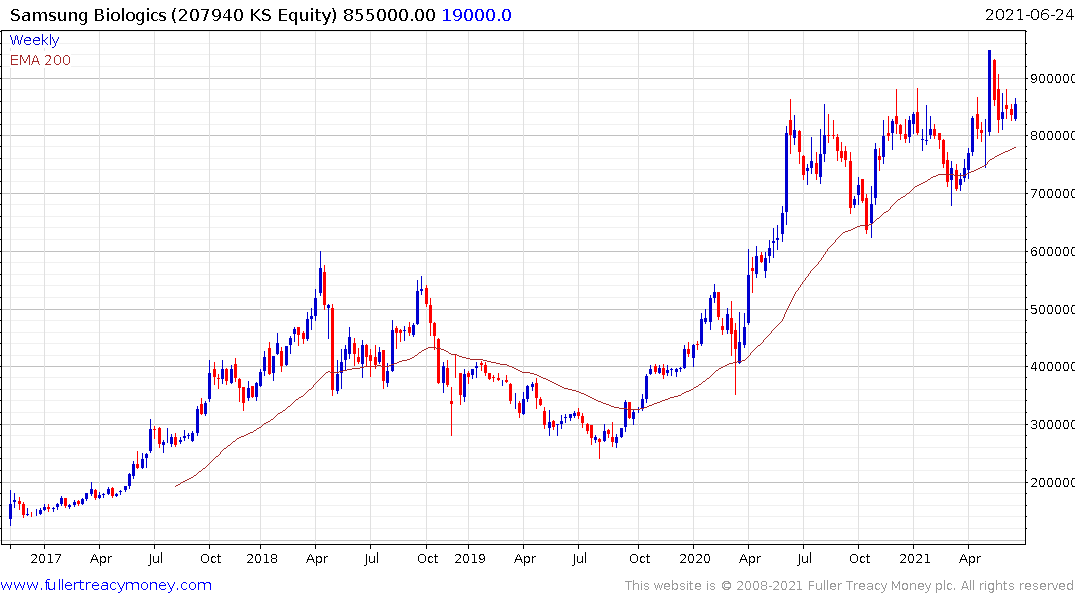 Samsung Biologics is firming from the upper side of yearlong range. 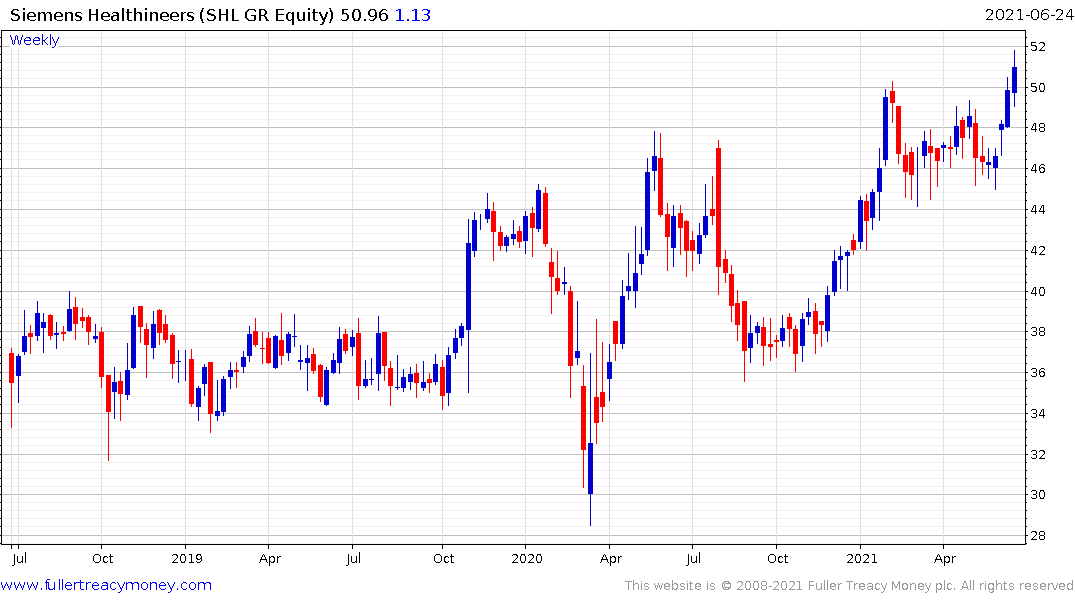 Siemens Healthineers broke out to a near high today. 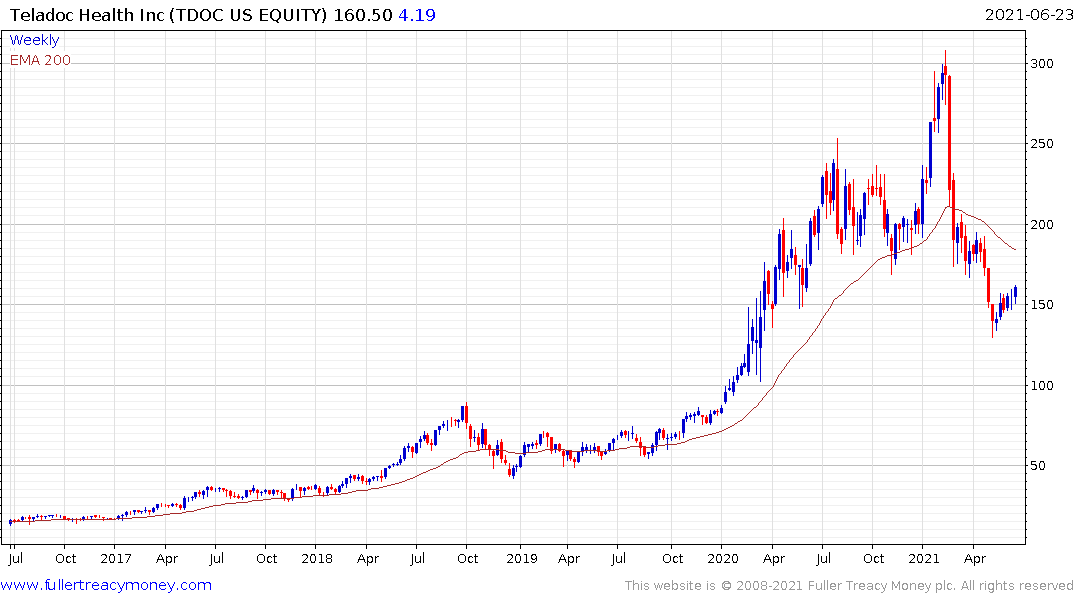 Teledoc collapsed in the 1st quarter but found at least near-term support over the last month. It will need to sustain a move back above the trend mean to signal a return to demand dominance beyond the short term.

There are definitely also patches of outperformance in the Europe, Middle East & Africa (EMEA) sector but the broad Index has a striking similarity with the H-Share Index. 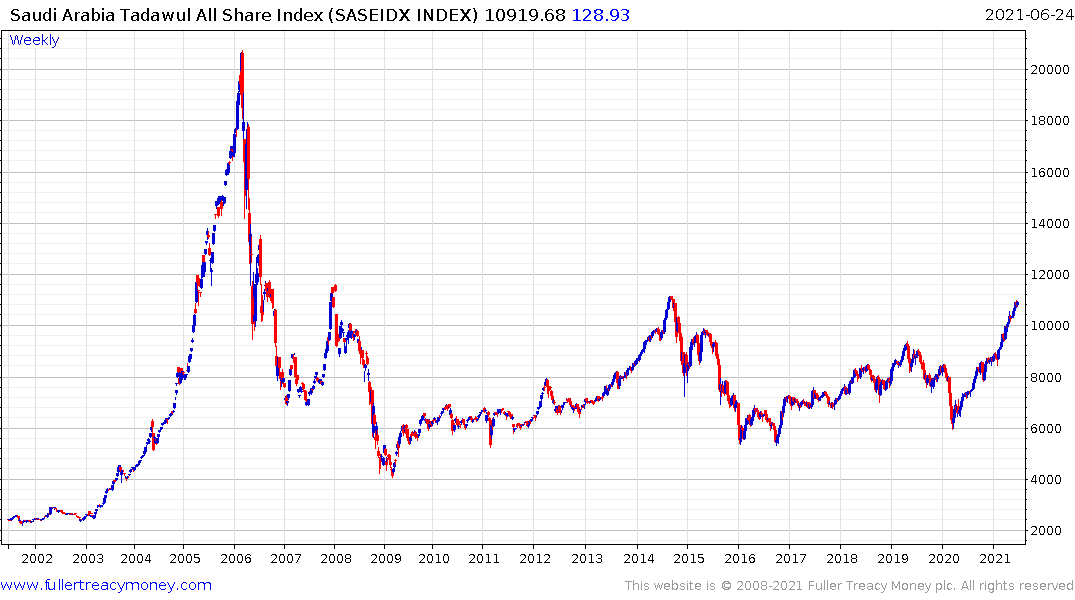 Saudi Arabia’s market is back testing the 2007 and 2014 highs which represent the upper side of the base formation. 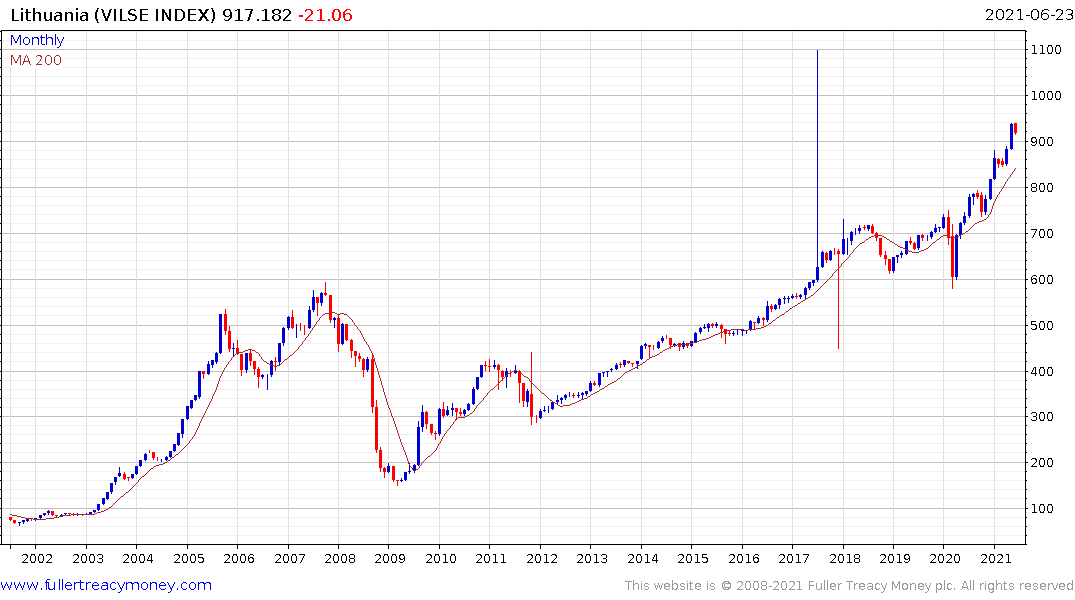 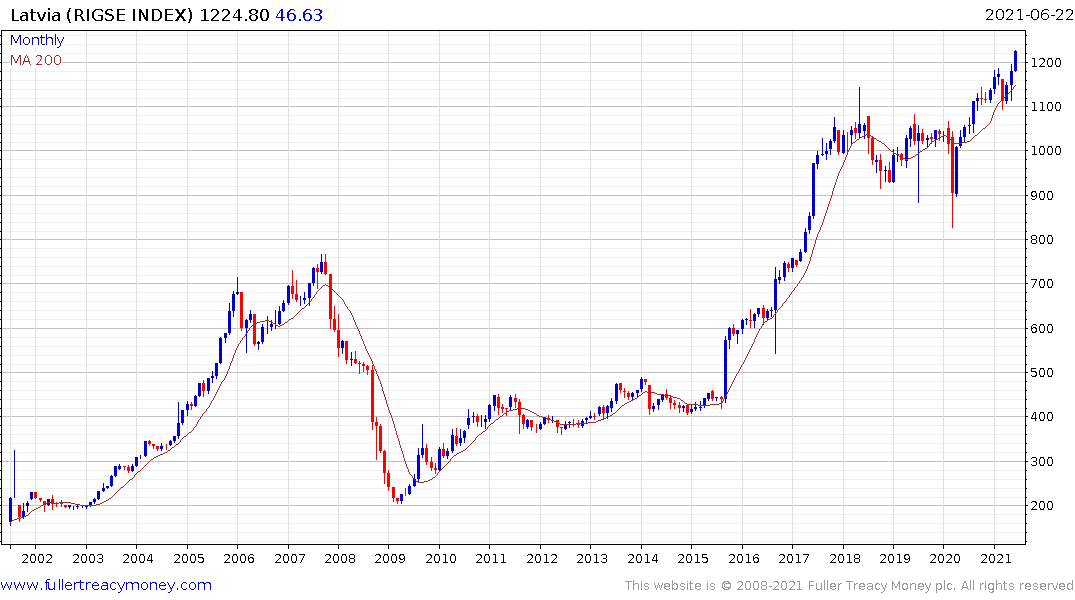 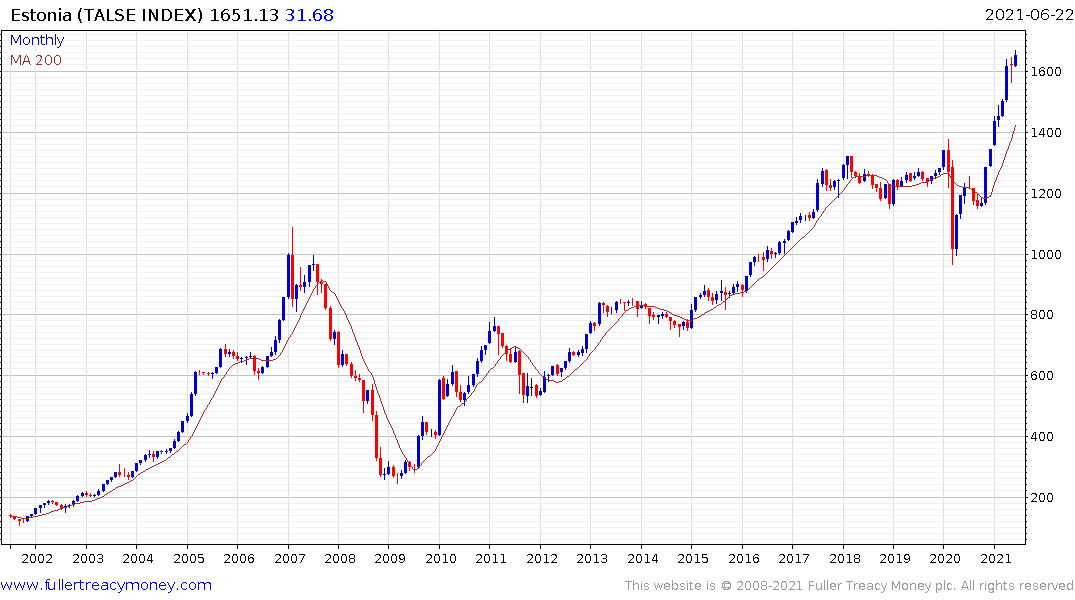 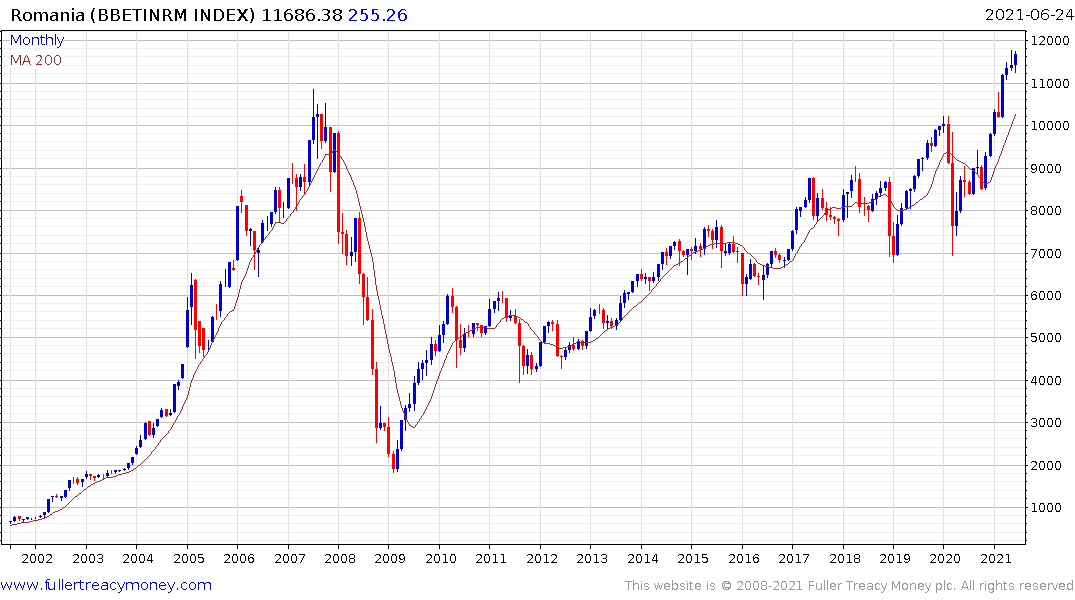 The Lithuanian Index continues to trend higher and is heavily weighted by utilities. There is only one listed bank in the country which suggests most credit is sourced in neighbouring Russia and/or from the EU. The Lativan, Estonia and Romanian indices are also in clear uptrends. 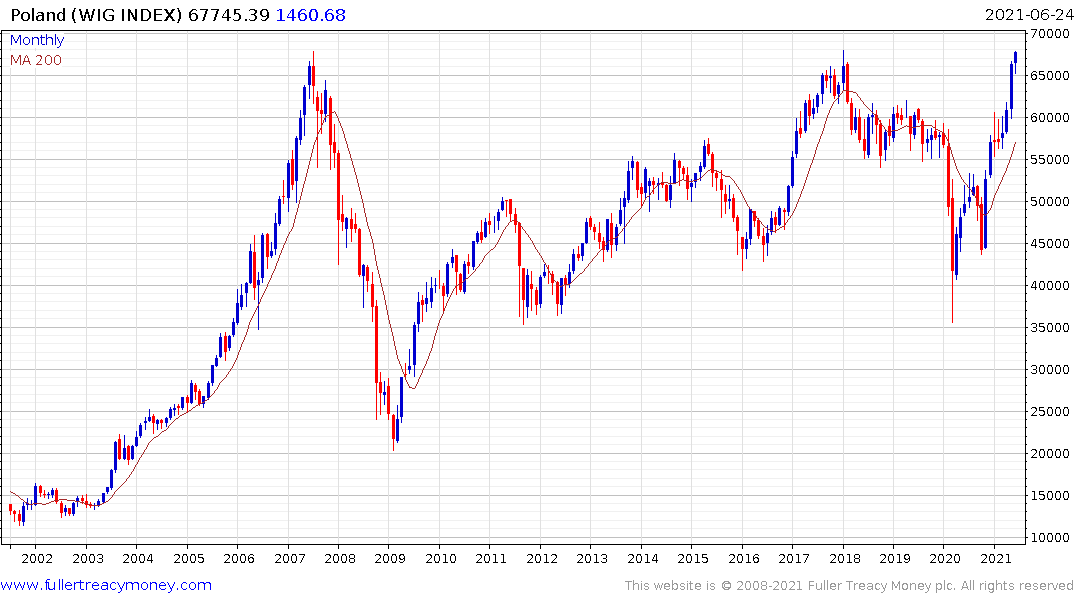 The Polish WIG Index is on the cusp of completing a 14-year range.