Three-Decade Treasuries Rally Is Far From Over by Eoin Treacy

Meanwhile, I believe Treasury yields are more likely to go down than up. First, persistent slow growth, gridlock in Washington, business uncertainty, and ample supplies of capacity and labor on a global scale mean the U.S. employment situation
will probably remain weak.

The Fed has said it wouldn’t raise its federal funds rate until the unemployment rate -- now 7 percent -- comes down to 6.5 percent. That target is becoming less meaningful, however, because the decline in joblessness has been primarily the result of a falling labor participation rate, not rising employment. If the participation rate hadn’t dropped from its February 2000 peak because of the retirement of members of the baby-boom generation, discouraged job-seekers and youths who have stayed in school during the recession, the unemployment rate now would be 13 percent. As investors increasingly grasp the Fed’s falling unemployment rate target, Treasury yields -- which have anticipated a rise in interest rates -- will probably continue to decline.

Inflation is close to zero and deflation is probably only being forestalled by huge fiscal and monetary stimulus efforts. But that stimulus has been replaced by fiscal drag, resulting in the shrinking federal deficit. In addition, the impending Fed tapering of its bond purchases won’t tighten credit by reducing excess bank reserves, but it will reduce the monthly additions to that $2.4 trillion trove.

With inflation this close to zero, it won’t take much of a hiccup to rattle the economy. And deflation is distinctly beneficial to Treasuries.

How the US Treasury market performs is perhaps the most important consideration for large investors such as pension funds and has become a contentious issue over the last year. For three decades total return has been flattered by a confluence of yield and capital appreciation, with the latter being far more dominant over the last few years. With interest rates at record lows, a reliance on capital appreciation has transformed the asset class into a large trading vehicle rather than the secure source of income it has classically been known for.

As with any investment vehicle, performance will be influenced by supply and demand. On the positive side, with an improving fiscal situation the Treasury needs to issue fewer bonds so supply has probably peaked at extremely elevated levels.  The Fed may continue to purchase bonds at the same pace in a declining supply environment but would risk a major additional distortion of the market which may be difficult to unwind.

The multiplying effect of carry trades and leverage that has helped fuel rallies across bond and equity market is highly sensitive to any change in the status quo. Investors anticipating a tighter monetary environment have decided that discretion is the better part of valour and closed long positions in Treasuries as yields leapt earlier this year. 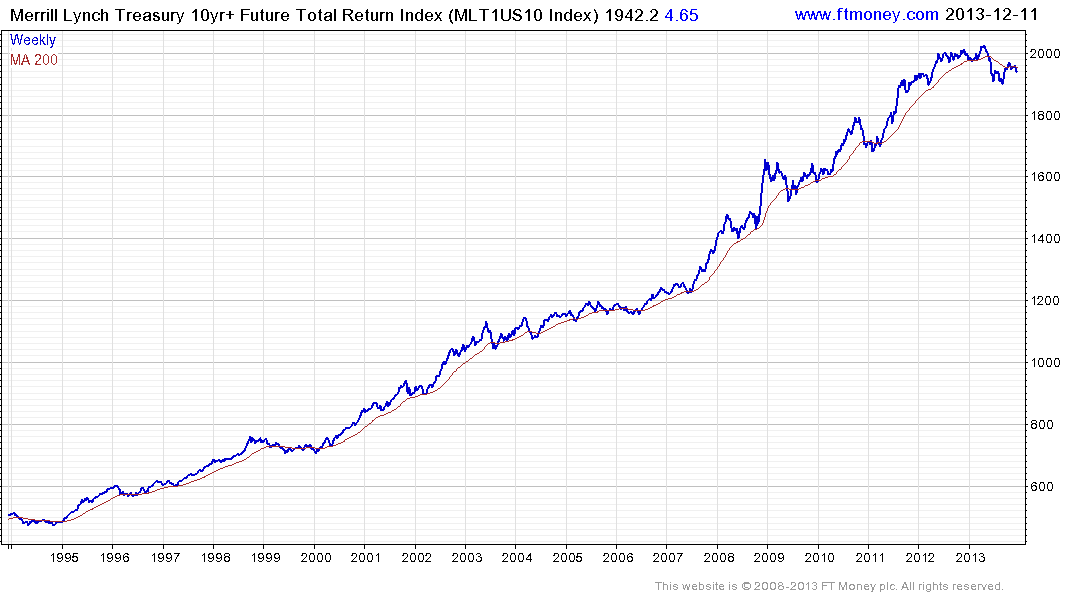 The Merrill Lynch 10-yr+ Total Return Index remains one of the best barometers of government bond market performance. It exhibited among the most consistent charts in the world until earlier this year when it broke downwards. When a previously consistent trend becomes inconsistent, we can only conclude that the supply / demand imbalance that animated the move has changed. Considering that this breakdown followed a loss of momentum, we can reasonably conclude that at least a medium-term top has formed and potentially a secular bear market is beginning.

From the perspective of an investor, positions in long-dated Treasuries are unlikely to keep pace with other asset classes. The perception that liquidity will become less abundant could have a knock-on effect for corporate borrowing programs, dividend and buyback programs. As a result this is a time for caution rather than aggressive risk taking.