Automobile, beer and cosmetics firms have slashed young-adult advertising and market to retirees instead, says Yohei Harada, head of the youth-marketing unit at Tokyo advertising agency Hakuhodo Inc. “The role of parents and children is getting reversed, where the parents from the bubble generation still act like children and want to buy the fancy car, while their children in the post-bubble generation worry about their parents’ spending,” he says.

Takashi Saito, a 33-year-old unmarried entrepreneur, was living in group apartment in Tokyo in 2015 when he decided to start a business. His idea: an online clothing-rental company for women who want a varied wardrobe but don’t want to pay for it. For $45 a month, clients rent three articles of clothing at a time, which they can return for others when they like.

Mr. Saito thought it would be easy to get a loan because Japan’s low-rate policies are meant to spur banks to lend more to small businesses. It wasn’t.

He asked Japan Finance Corp., a state-owned institution set up to lend to small businesses, for $200,000. After much haggling, he got less than $50,000. A year later, as the business grew, he asked for more. He was rejected. Japan Finance Corp. declined to comment.

Negative interest rates are sharply deflationary and central banks are finally coming to that realisation after an embarrassing foray last year. The Bank of Japan was the most visceral advocate of the policy and has been forced to backtrack. The commitment to holding JGB yields close to but below zero is a reflection of fears about refinancing costs following a splurge on new debt issuance but even that appears to have been abandoned with the yield currently at 0.05%.

The psychology of young people discussed in the above article appears to be reminiscent of that which prevailed in the USA during the Depression of the 1930s. Something I have been wondering about over the last couple of weeks is that Japan may have made policy mistakes but the bigger picture is that it was trying to create inflation during one of the most sharply disinflationary periods in history. If interest rates have in fact bottomed and the 36-year bull market in bonds is over then shouldn’t it be easier for Japan to achieve the inflation rate it so badly needs? 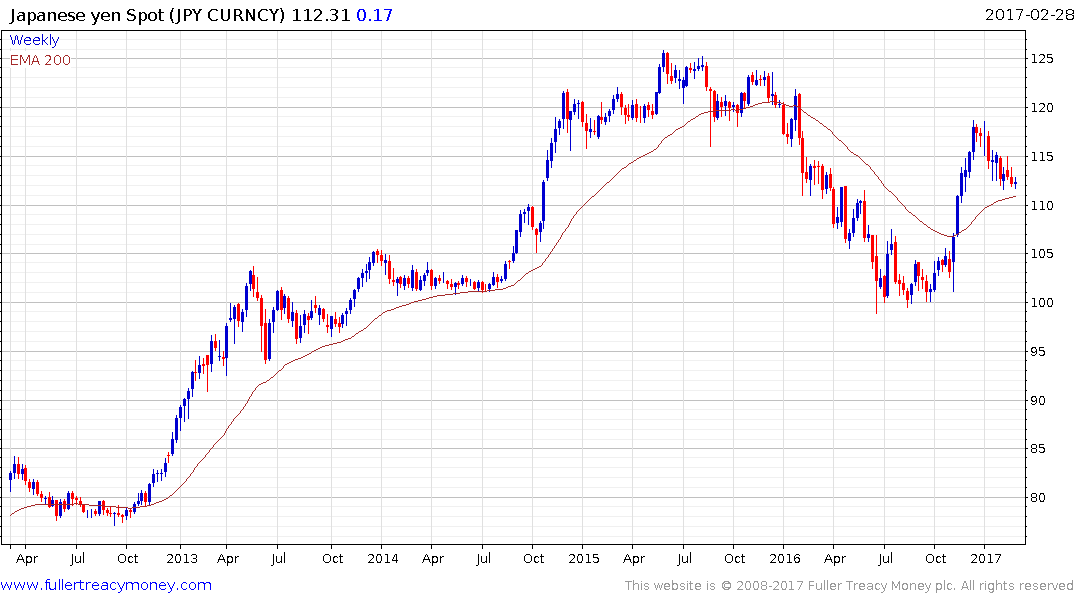 The Yen is retesting it the region of its trend mean today as the Dollar weakens ahead of Trump’s speech this evening but a sustained move below it would be required to question medium-term Dollar dominance. 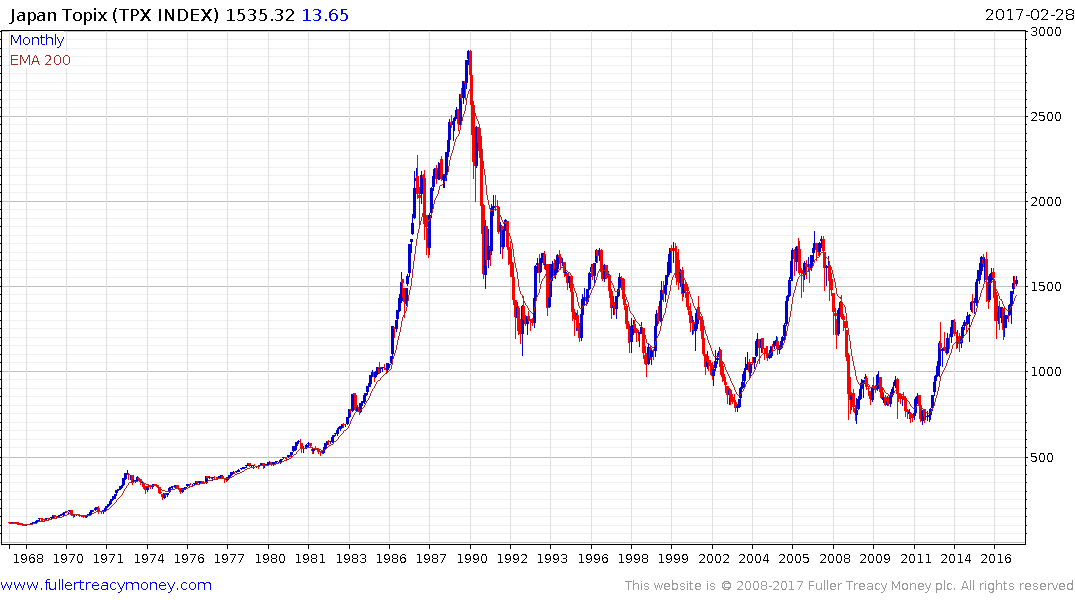 The Topix Index has been ranging below 1750 since 1991 and a sustained move above that level will be required to confirm a change to the secular malaise.