The Winds of Change by Eoin Treacy

One of the biggest changes that did take place in the 1960s was the emergence of “growth investing” via fast-growing companies, many of which were quite new. The “Nifty Fifty” I talk about so much ruled the stock market in the late 1960s: this group included office equipment manufacturers IBM and Xerox, photography titans Kodak and Polaroid, drug companies like Merck and Eli Lilly, tech companies including Hewlett Packard and Texas Instruments, and advanced marketing/consumer goods companies such as Coca-Cola and Avon.

These companies’ stocks carried very high price/earnings ratios, reaching up to 80 and 90. Obviously, investors should only pay multiples like these (if ever) if they’re sure the companies will be preeminent for decades to come. And investors were sure. In fact, it was widely believed that nothing bad could happen to these companies and they could never be disrupted. This was one of post-war America’s first major brushes with newness and – in a good example of illogicality – investors embraced these companies, with their revolutionary newness, but somehow assumed that a newer and better new thing could never come along to displace them.

Of course, those investors were riding for a fall. If you bought the stocks of “the greatest companies in America” when I started working in 1969, and held them steadfastly for five years, you lost almost all your money. The first reason is that the multiples in the late 1960s were far too high, and they were gutted in the subsequent market correction. But, perhaps more importantly, many of these “forever” companies turned out to be vulnerable to change.

Technological innovation is highly disruptive. It upends the familiar ways in which processes were followed and creates value along the way. It also causes significant social upheaval. The 1960s were remembered by investors for the success and ultimate failure of the Nifty 50 but by everyone else for the sexual revolution, fight for equal rights and anti-war movements. Upskilling of the population was also a significant factor during this time when typing pools gave way, albeit grudgingly, to women taking greater roles in business.

1960s growth stocks triumphed in an environment when interest rates were rising from very low rates and much of the global economy had very low leverage ratios. Treasury yields only began to rise in 1965 and that was because growth was so strong.

Today we have similar social revolutions in response to the disruption delivered by technological innovation and the monetary/fiscal political response to the Global Financial Crisis and European Sovereign Wealth Crisis. Tribalism is the dominant theme of the last decade and political populism is merely a symptom of that wider trend.

Leverage ratios are at historically high levels. As a result, interest rate sensitivity is much higher than it was heading into the 1970s. This helps to highlight the fact that history does not repeat but it certainly rhymes.

The first oil crisis in 1973 killed off the Nifty 50 bubble. Support for Israel during the Yom Kippur War was the final straw for Middle Eastern countries. The USA’s deficit spending of the late 1960s and the unilateral devaluation of the Dollar in 1971 all contributed to inflation spiking and to the causes of the oil embargo.

Today, central banks are talking about raising rates and beginning to normalise policy. At the same time politicians are pandering to the demands of social movements championing causes as diverse as racial justice, climate change and transgender rights. This appetite for deficit spending continues to support liquidity flows to the stock market and helps to ensure reactions are limited to reversions to the mean.

The risk is in the large number of unprofitable companies now being listed. They are the customers for the large data centre operators that dominate the major indices. No profits, and often no revenue, implies a run rate on cash that needs to be replenished periodically. These types of companies are extremely interest rate sensitive. 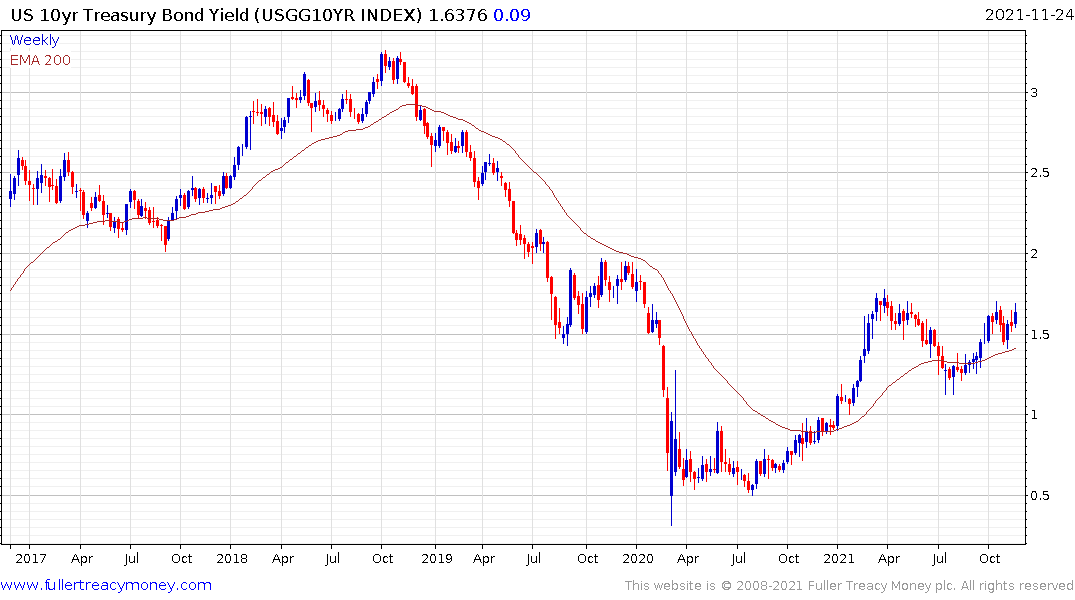 Treasury yields are locked in a tussle for control. On the one hand, inflationary pressures have surged; with consumer demand compensating for the privations of the pandemic lockdowns. The counter argument is the magnitude of the trouble represented by higher rates is so large that rates can’t rise beyond the April peak near 1.8%. Meanwhile, the trend suggests the market believes the Fed will try to raise rates and will ultimately rue the decision. 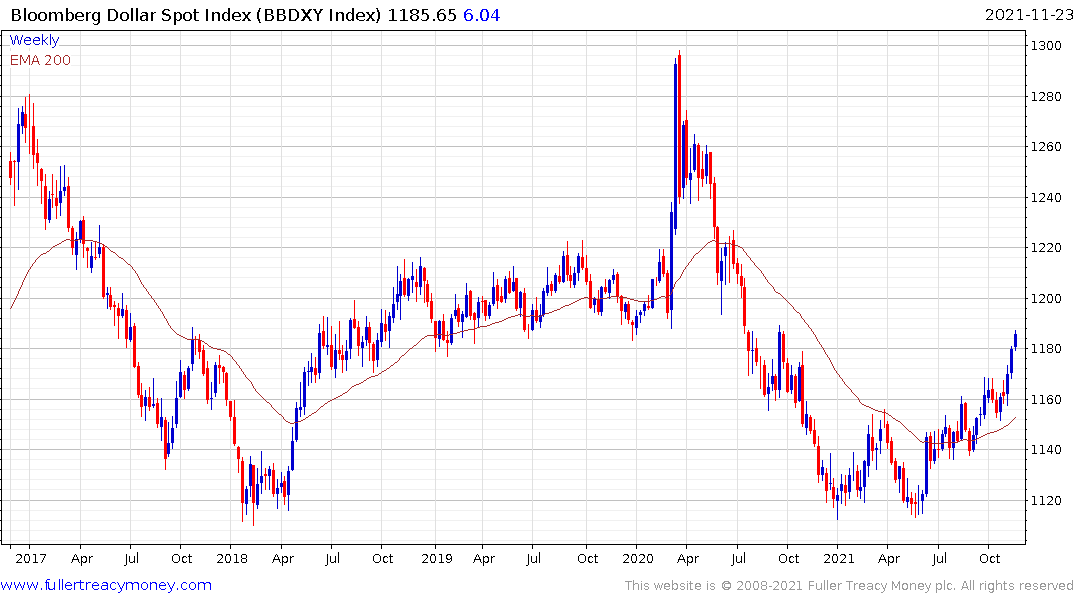 The Dollar remains the lynchpin for the dominance of Wall Street performance relative to everywhere else. It remains firm because every country is dealing with the pandemic and everywhere has high leverage ratios which make normalising policy a challenge. At present the USA is faring better than most so it continues to attract capital. If for the any reason the Dollar turns lower, that calculus will reverse.