The Third Revolution in Warfare
Comment of the Day

The Third Revolution in Warfare by Eoin Treacy

An example of an autonomous weapon in use today is the Israeli Harpy drone, which is programmed to fly to a particular area, hunt for specific targets, and then destroy them using a high-explosive warhead nicknamed “Fire and Forget.” But a far more provocative example is illustrated in the dystopian short film Slaughterbots, which tells the story of bird-sized drones that can actively seek out a particular person and shoot a small amount of dynamite point-blank through that person’s skull. These drones fly themselves and are too small and nimble to be easily caught, stopped, or destroyed.

These “slaughterbots” are not merely the stuff of fiction. One such drone nearly killed the president of Venezuela in 2018, and could be built today by an experienced hobbyist for less than $1,000. All of the parts are available for purchase online, and all open-source technologies are available for download. This is an unintended consequence of AI and robotics becoming more accessible and inexpensive. Imagine, a $1,000 political assassin! And this is not a far-fetched danger for the future but a clear and present danger.

We have witnessed how quickly AI has advanced, and these advancements will accelerate the near-term future of autonomous weapons. Not only will these killer robots become more intelligent, more precise, faster, and cheaper; they will also learn new capabilities, such as how to form swarms with teamwork and redundancy, making their missions virtually unstoppable. A swarm of 10,000 drones that could wipe out half a city could theoretically cost as little as $10 million.

If the cost to the aggressor is reduced, that’s a problem for regular civilians. That’s really not good news and suggests the toll in terms of casualties in future wars will be considerably higher than anything seen in a century.

It also suggests that the massive investments in large pieces of military hardware are going to be significantly less relevant in future. That’s not great news for the military industrial complex. 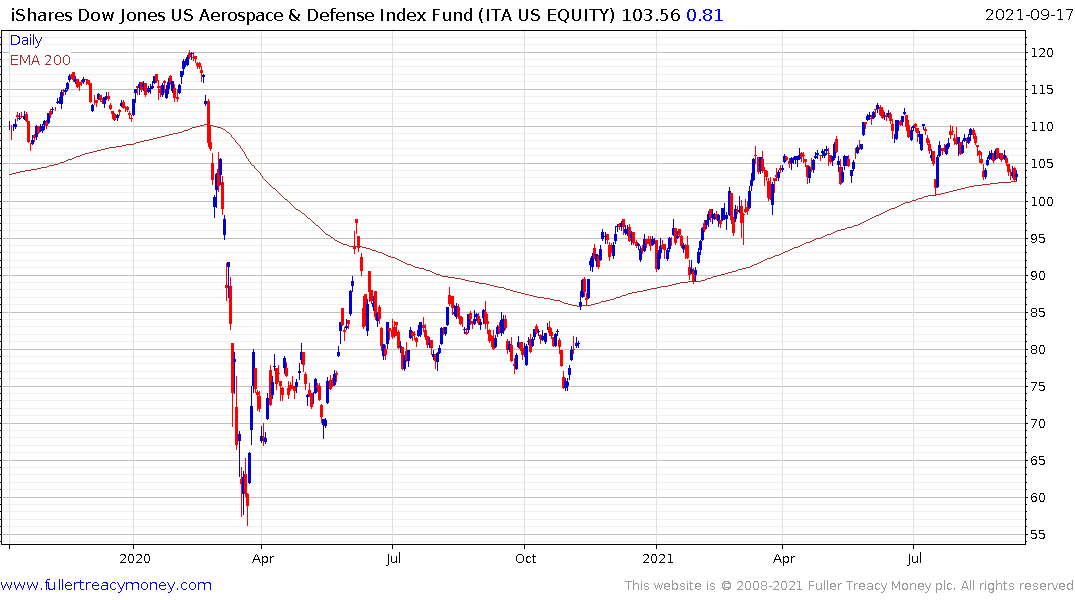 The iShares US Aerospace & Defence ETF is also back testing the region of the trend mean and will need to bounce soon if the benefit of the doubt is to be given to the upside.

It also begs the question what are we to do with all the “left of the bell curve” males for whom the lower echolons of the military play a significant route in attaining a middle class lifestyle.