The rise of private markets
Comment of the Day

The rise of private markets by Eoin Treacy

External financing is increasingly intermediated outside traditional channels. Banks and other institutions active in public capital markets, such as equity and corporate bond mutual funds, remain key financing sources for large and mature corporates. That said, “alternative asset managers” (AAMs) have become pivotal for smaller firms globally, including in emerging market economies (EMEs). Many AAMs were established as private equity firms that later expanded into credit, thus turning themselves into one-stop capital providers for firms less able or willing to access traditional sources.

Private markets have three features that distinguish them from public markets. First, there is limited liquidity transformation because investors commit capital for extended periods. Second, these investors tend to be large and sophisticated entities such as pension funds, whose focus on long-term returns enables target companies to confront significant earnings volatility. Third, the regulation of private market investment vehicles is relatively light, partly reflecting the lesser degree of liquidity mismatches and also the limited presence of retail investors.

The lack of regulation in the private markets is seen by many investors as a positive aspect. The challenge for the future is large pension funds are highly active in the sector. They might have long-term liabilities but they also have a long-term need for yield. The private sector has been particularly attractive because they have gained both portfolio diversification and higher returns.

The fact this exposes the ultimate pension beneficiaries to significant duration risk is seen as a necessary evil. The fact it has been an irrelevant consideration for more than a decade has allowed private assets to swell and large numbers of institutional funds to participate. Here is a section from a report from JPMorgan:

The universe of Alternative Investments (AI), consisting of hedge funds, real estate, digital assets, private debt and private equity, continued to grow strongly over the previous quarters approaching $27tr at year-end based on our estimates.

The outstanding amount of alternative assets had grown by 25% during 2021 vs. 8% for traditional publicly-listed equities and bonds. As a result the share of alternatives in the total asset universe of both alternative and traditional asset classes has risen to a new high of 13.3% by the end of 2021 (Figures 1 and 2).

Over the past year the biggest proportional increase in AUM had been seen in digital assets (195%) followed by Private Equity (37%), Private Debt (18%), Real Estate (15%, and Hedge funds (11%). Of course last year’s increase in AUM was bolstered by the simultaneous rally of almost all asset classes, especially equities and digital assets. The YTD correction in equity, crypto and bond markets is a reminder that 2022 would be different from last year and thus last year’s very strong AUM increases are unlikely to be repeated.

An increase of $5.4 trillion in a year is hard to comprehend. There is no question it is a direct result of monetary and fiscal easing on a previously unimaginable scale. The performance of the balanced 60/40 portfolio may be a cautionary tale for the popularity of private markets. 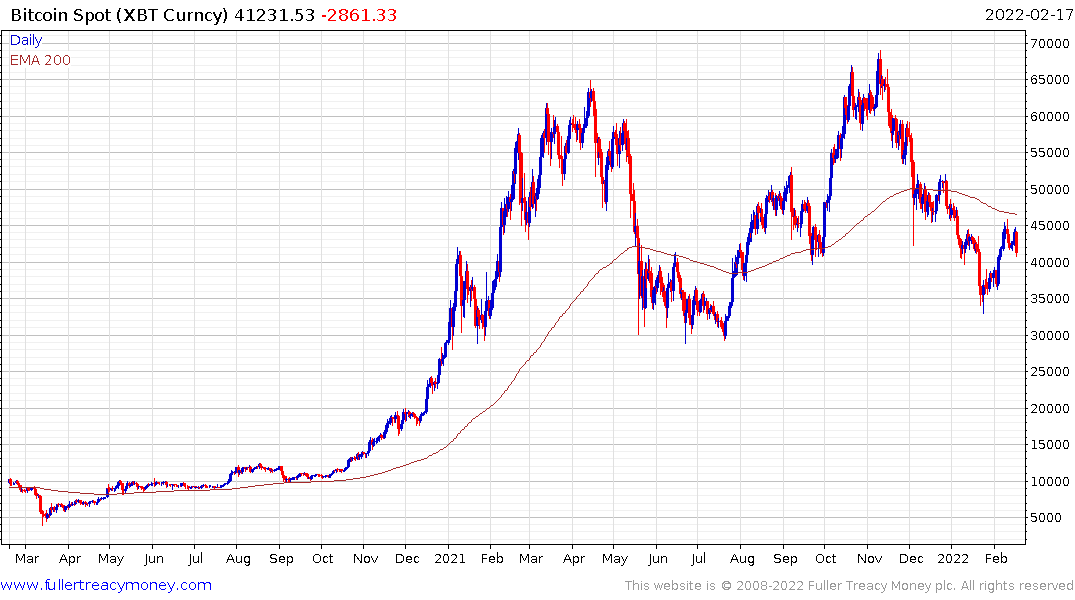 If 2008 taught us anything, illiquidity can become a problem very quickly when everyone heads for the doors. That’s particularly troublesome for cryptocurrencies which are extremely dependent on liquidity to support the valuations but can also be sold with relative ease compared to property.