The Next Phase of the V
Comment of the Day

The Next Phase of the V by Eoin Treacy

#1: A global synchronous recovery: We expect a broad-based recovery, both geographically and sectorally, to take hold from March/April onwards. Driving this synchronous recovery will be a more expansive reopening of economies worldwide and the extraordinary monetary and fiscal support now in place. Global GDP, already at pre-COVID-19 levels (based on seasonally adjusted GDP levels), continues to accelerate and is on track to resume its pre-COVID-19 trajectory by 2Q21. We expect China to return to its pre-COVID-19 path this quarter, and the US to reach it by 4Q21.

#2: EMs boarding the reflation train: After a prolonged period in which EMs have faced a series of cyclical challenges, macro stability is now in check. With the COVID-19 situation improving in a broad range of EMs, their pace of recovery is catching up. EM growth rebounds sharply in 2021, helped by a widening US current account deficit, low US real rates, a weaker dollar, China’s reflationary impulse, and EMs ex China's own accommodative domestic macro policies.

#3: Inflation regime change in the US: We see a very different inflation dynamic taking hold, especially in the US. The COVID-19 shock has accelerated the pace of restructuring, creating a significant divergence between the output and unemployment paths. With policymakers maintaining highly reflationary policies to get back to preCOVID-19 rates of unemployment quickly, wage pressures and inflation will pick up from 2H21. We expect underlying core PCE inflation to rise to 2%Y in 2H21 and to overshoot from 1H22, with the risk that it happens sooner.

With millions of people out of work it is easy to form a gloomy picture of economic potential. However, even at a US unemployment rate of 10%, there are still 90% of people with jobs. Moreover, many people who have held onto their employment have boosted savings this year. 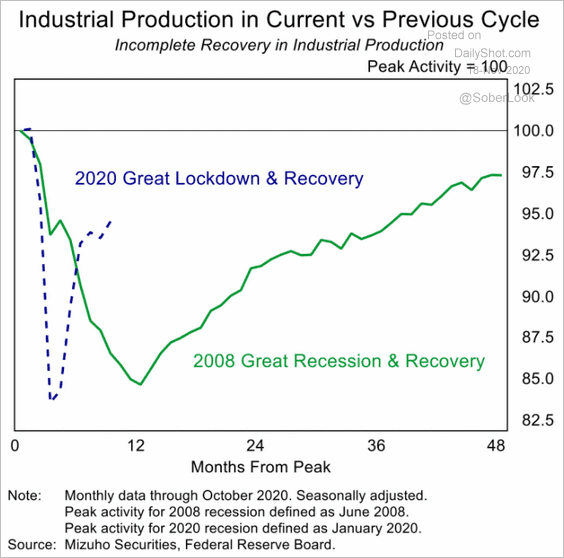 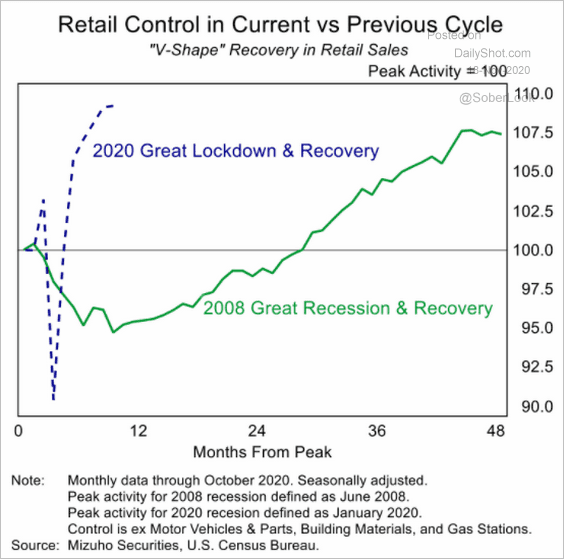 When 90% of people come through a crisis in OK shape and a significant minority come out ahead, there is ample scope for a significant bounce back in activity. There is a great deal of pent up demand in the global economy and all that cash on the side lines is fuel for bull markets. The fact monetary and fiscal policy is aimed to improving the outcomes for the remaining 10% suggests loss credit and low rates are here to stay.

In many respects this market environment is similar to the aftermath of the tech bubble in 2000. Back then, the mania in tech evaporated and led to a shallow recession which was exacerbated by 9/11 in 2001. Most consumers were underleveraged heading into the recovery. Low interest rates and the willingness of banks to lend fuelled a significant housing market bubble. Negative real interest rates, China’s accession into the WTO, and fears of financial repression fuelled Dollar bearishness and simultaneous bull markets in many commodities and emerging markets.

Today, we have are looking at short but very sharp contractions for many economies. The shock was not in tech but in travel and tourism. The high unemployment rate for that sector is going to take time to repair. After 9/11 many believed airlines would never recover. Today with virus fears and flight shaming there is a similar belief. I just don’t think it is credible. Video conferencing facilitates more communication it does not circumvent the need for in-person meetings. The market share captured by video calls, cloud, remote work, stay at home methods to deal with boredom is not going to grow as quickly in 2021. Recovery in time spent on traditional pastimes is a no brainer.

There is no doubt governments are overleveraged in this cycle but consumers and banks are in much better shape. That is particularly true of the USA. Emerging markets have much better debt to GDP ratios than developed markets. The Fed has told us they are going to keep rates below the rate of inflation for a prolonged period. That’s the definition of financial repression. 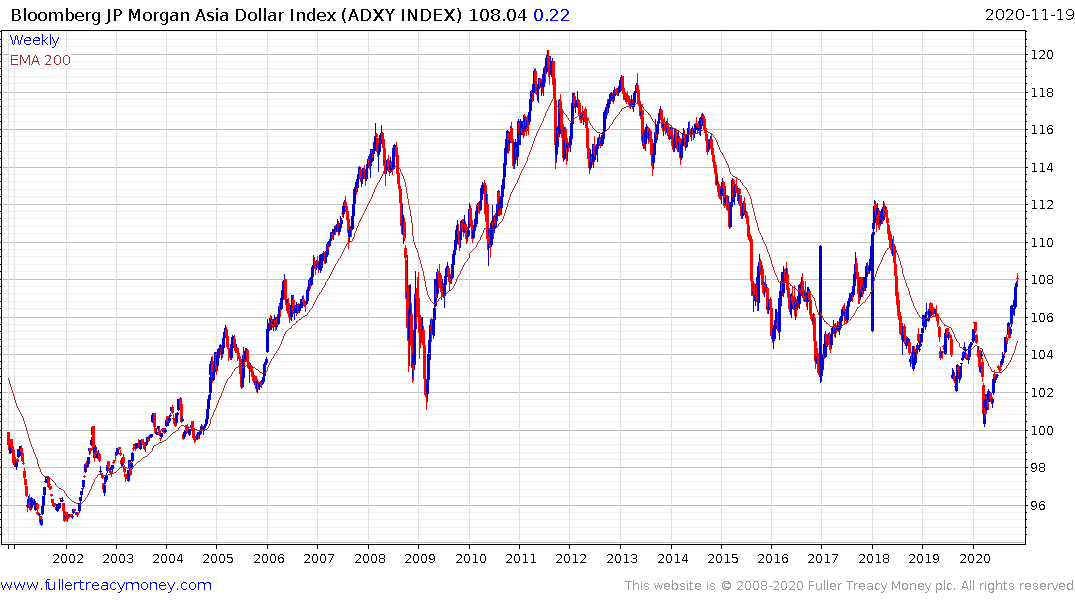 The Dollar remains susceptible to additional downside over the medium-term despite a short-term oversold condition.

The willingness of banks to lend will in many respects be dictated by the perception of how willing governments will be to backstop risk-seeking behaviour. During the pandemic, governments guaranteed loans and supplied banks with capital to make loans. The lack of a credit impulse kept official inflation figures contained following the credit crisis but that is unlikely to occur on this occasion. Today demand for credit is arising from government supported green energy initiatives. That is likely to be where the next bubble is blown. 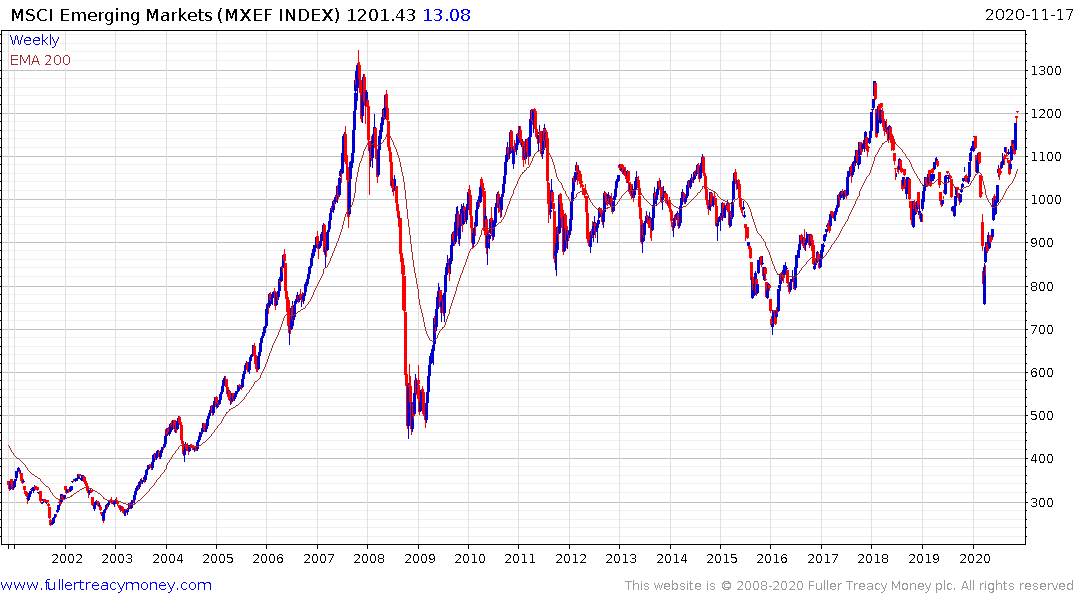 Meanwhile, emerging markets and precious metals are likely to trade in the same direction, in much the same way as they did in the decade up from the aftermath of the tech bubble. Gold has led and Asian markets now appear to be on the cusp of playing catch up.