The New Agri-Giant Invading the U.S. Heartland
Comment of the Day

The New Agri-Giant Invading the U.S. Heartland by Eoin Treacy

Viterra is already the world’s largest wheat trader, thanks to its investments in major exporting regions including Canada, Australia, Argentina, and the former Soviet Union. If Gavilon in the U.S. is added to that impressive portfolio, it will be the kind of concentration — and power — that governments worry about. Indeed, Beijing may be even more concerned about the deal than Washington. China, which is spending billions of dollars to build its own state-owned agricultural trading house, is unlikely to welcome further consolidation in an industry it relies on to feed more than one billion people.

Regulatory concerns aside, the deal is a steal. Glencore, founded by the late U.S. fugitive Marc Rich in the 1970s, built its agribusiness through acquisitions. In 2012, it beat out ADM and purchased Canadian grain trader Viterra Inc. for 6.1 billion Canadian Dollars ($4.8 billion). Today, Glencore controls just under 50% of the enlarged Viterra business, with 49% owned by two Canadian pension funds and a residual percentage controlled by the staff.

Most investment banks closed their commodity trading desks during the 2011-2016 bear market. They sold their ships and warehouses too so getting back to dominant positions is not going to be easy or cheap. That handed control of market making to private trading houses which now control the market regardless of whether Glencore’s bit for Gavilon is successful.

Glencore stopped separating out its agricultural products revenue on its balance sheet in 2017 and folded it into the energy sector. The rationale for the decision was probably because of corn’s use in ethanol production. It is also shields the agriculture trading revenue from scrutiny. 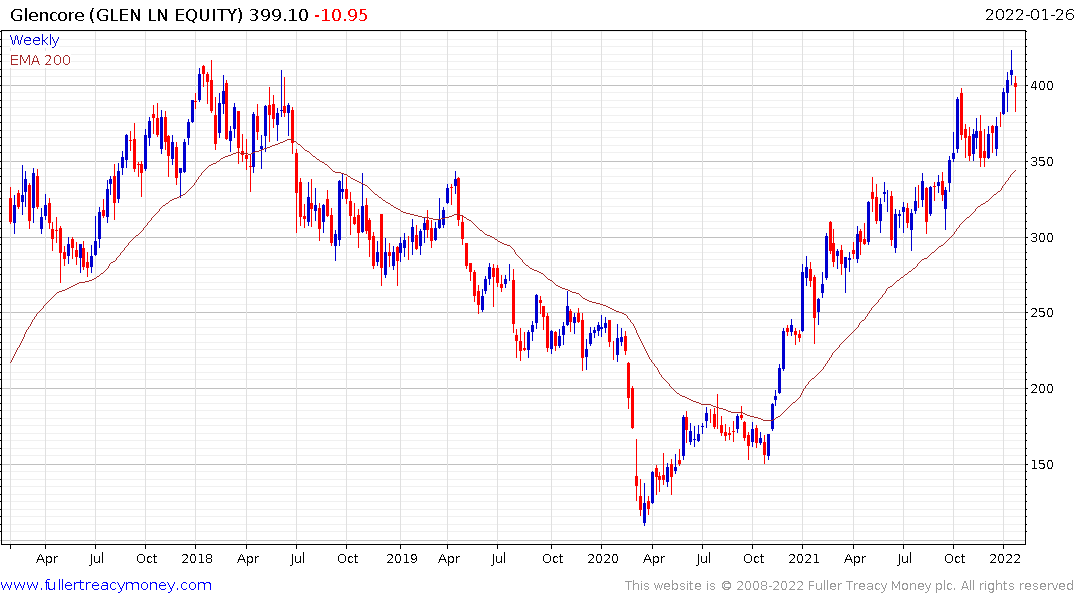 The share has failed to sustain moves above 400p since 2012 so a break above that level held for more than a week or two would signal a return to medium-term demand dominance.

If one is looking for a hedge against changing weather patterns, demand growth from a rising global population or inflation, agricultural commodities tick a lot of boxes. Droughts in South America, frost in Sao Paolo, cold and wet springs in the US Midwest, hot dry summers in Europe and Russia are all occurring at time when the population is growing and demand for food is rising in line with living standard improvements. These weather events may be temporary, but combined they are supporting prices. In the event this is a new trend, agricultural commodity prices could break out to new all-time highs. 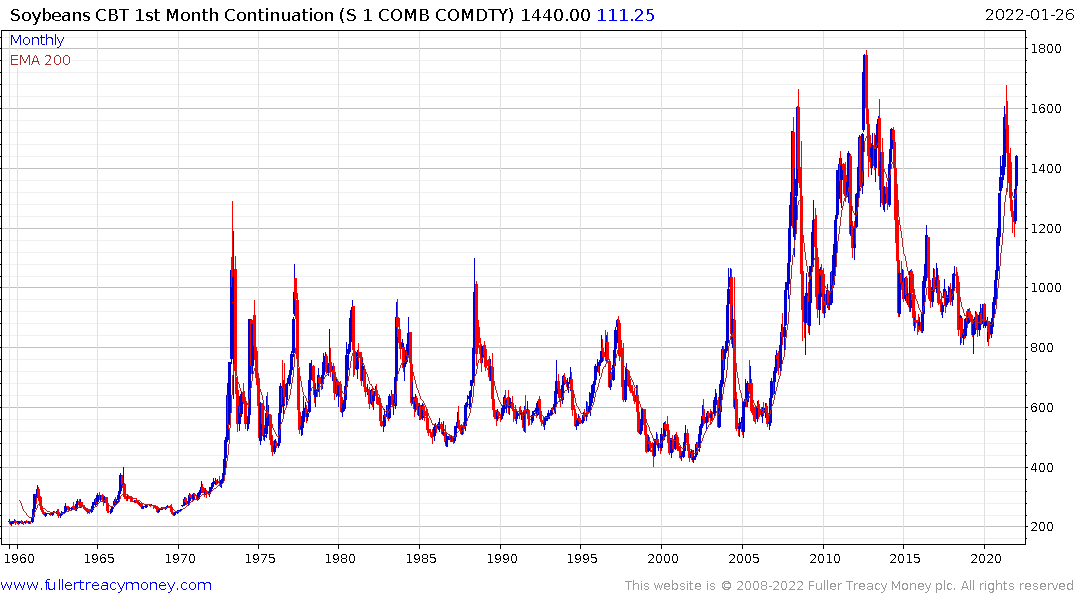 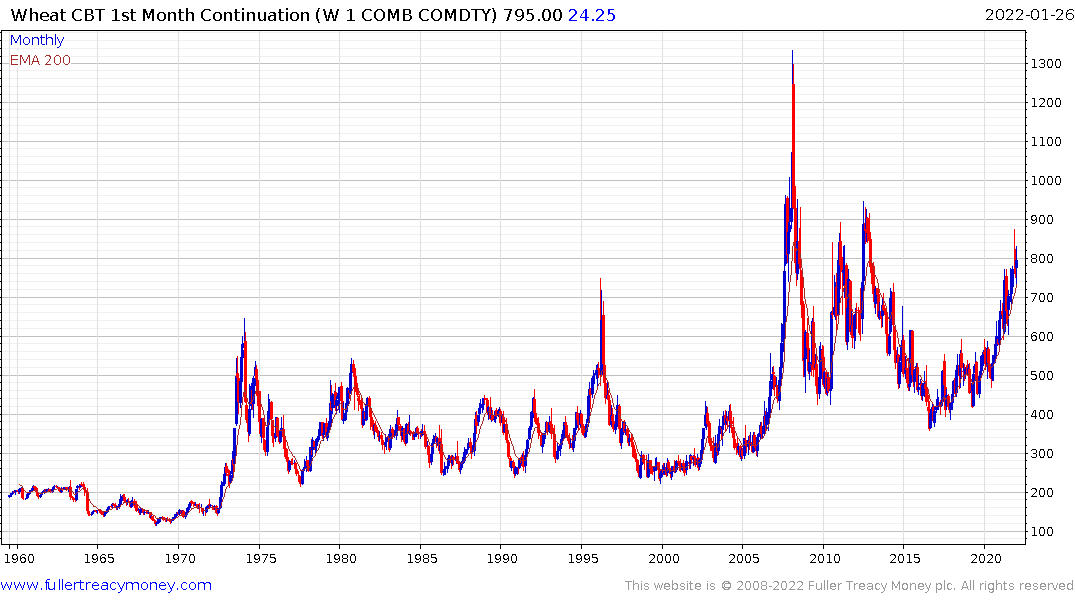 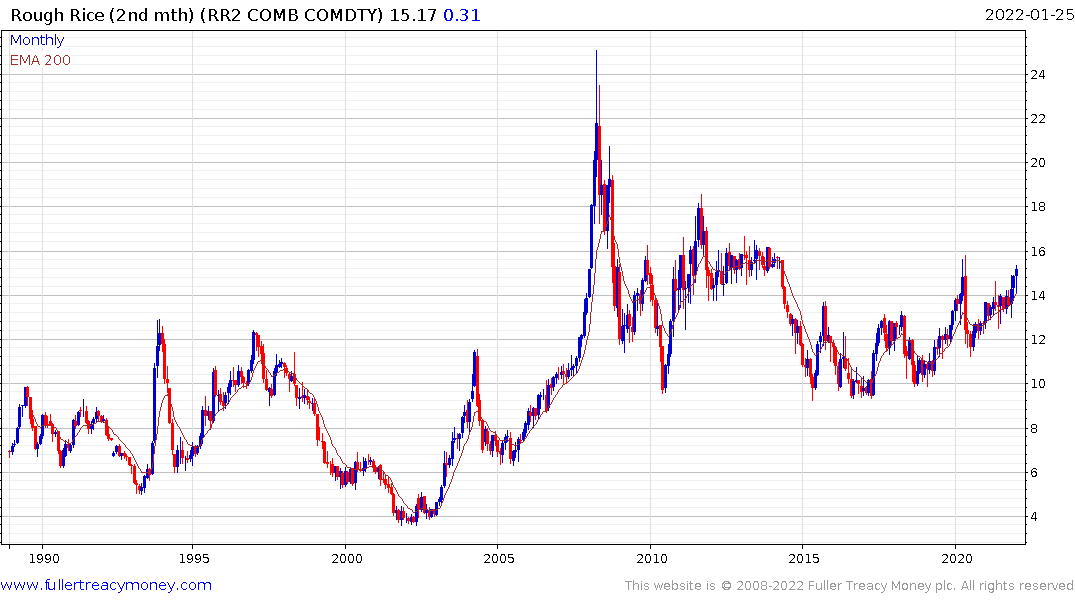 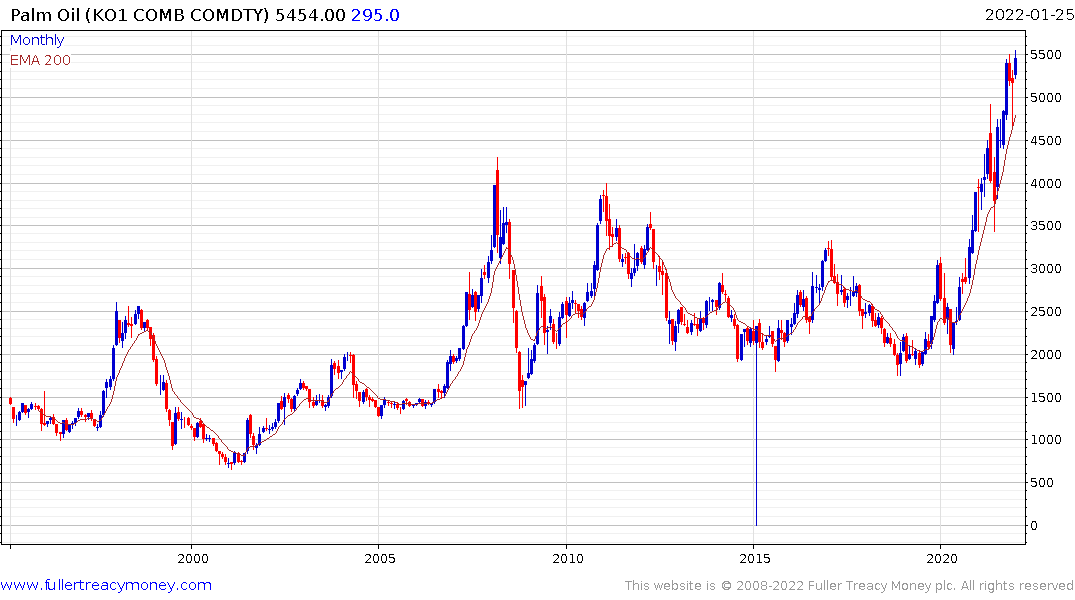 Palm Oil is the first of the major food commodities to breakout to new-all time highs. 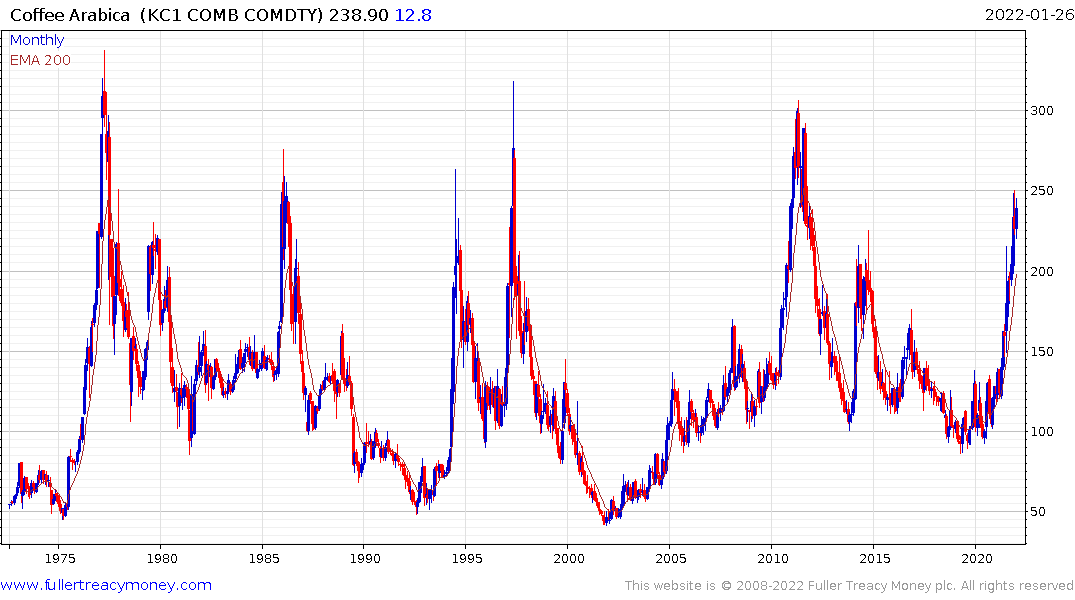 Arabic coffee on the other hand has been in a range for 45 years. 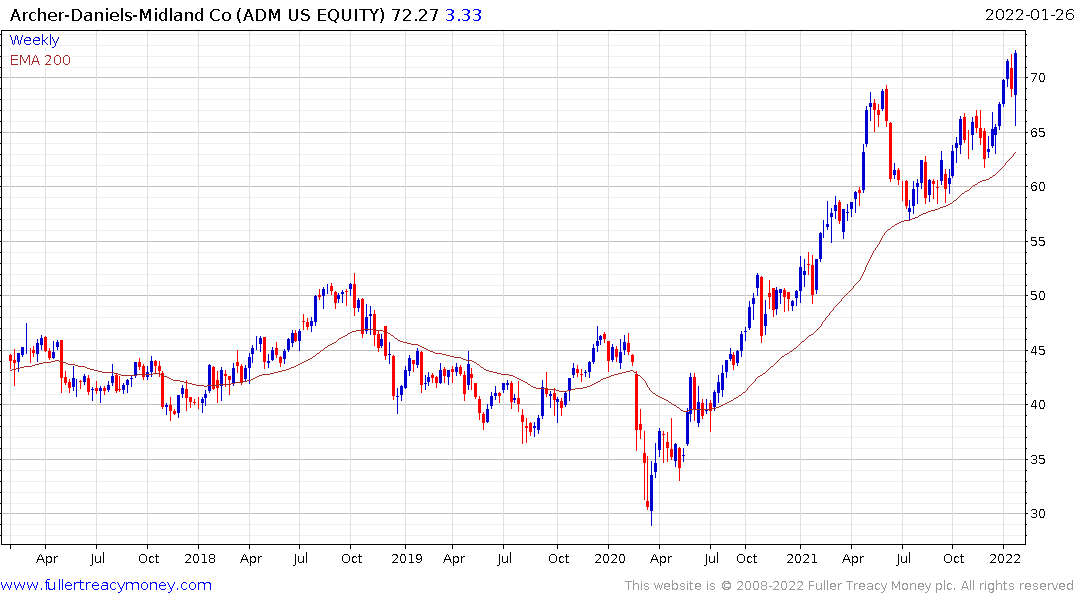 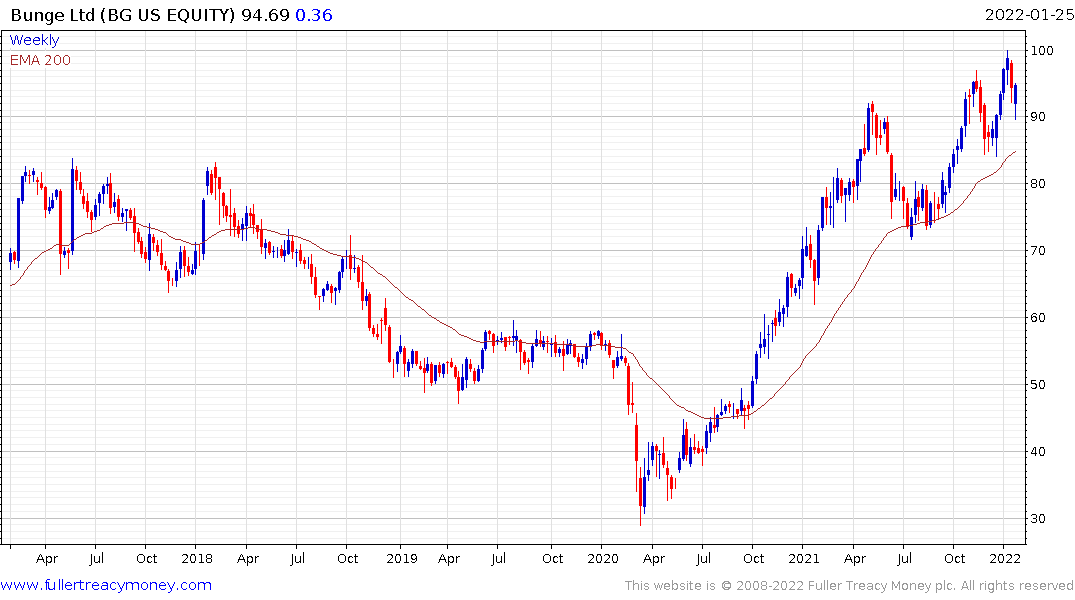 Bunge is firming from the region of the 2015 peaks. 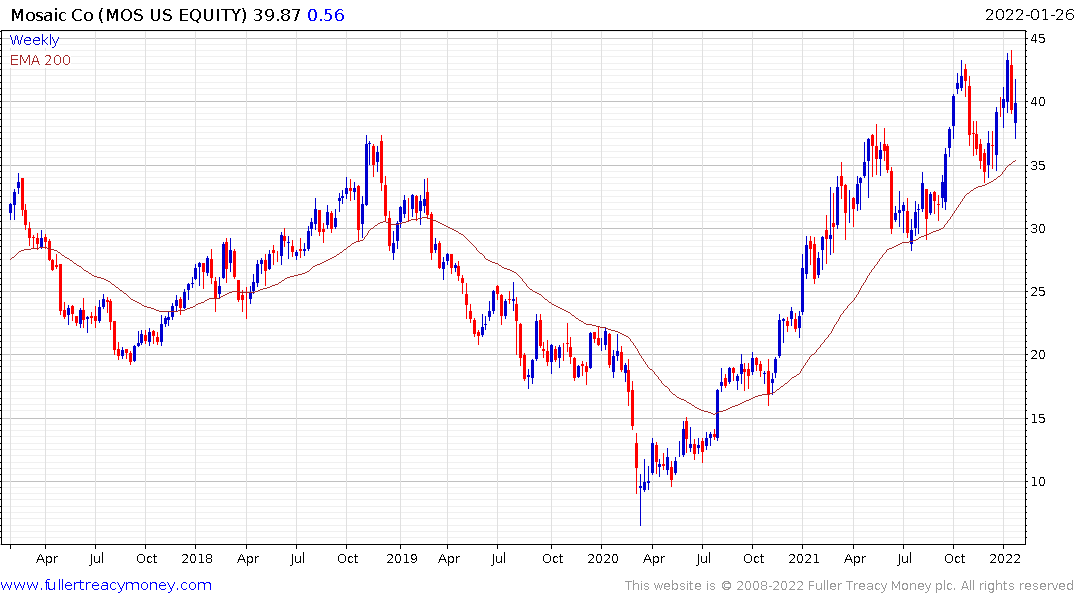 Mosaic is firming in the region of its base formation. 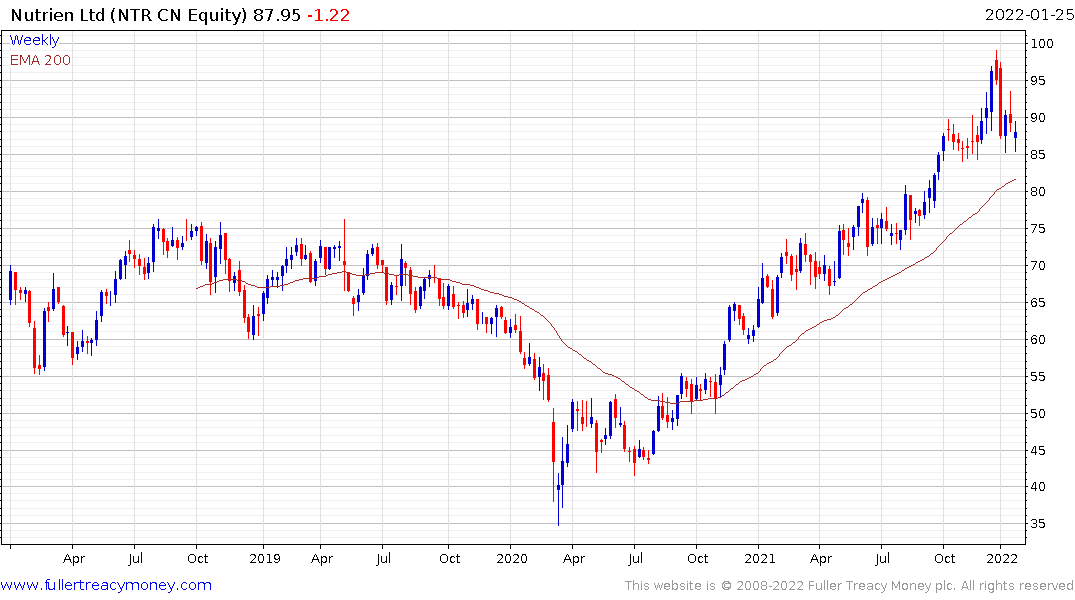