The message behind the Target balances
Comment of the Day

The message behind the Target balances by Eoin Treacy

Consensus: It's the mistrust towards the southern countries When investors transfer large amounts of bank deposits from the south to the north of the monetary union, which is reflected in the Bundesbank's high Target claims (see graph), this shows mistrust towards the southern countries and their banks. So far, the consensus. But there are fierce disputes especially among German economists about how this distrust can be reduced – and by whom.

The Target appeasers: completing the banking union
Economists close to the ECB do not derive any need for action for the ECB from the high Target balances. Instead, politicians are called upon to reduce investors' distrust towards the southern member states and their banks. To this end, they should complete the banking union, including a common deposit guarantee scheme. If the North bears greater liability for the southern countries, investors believe that the risks in the South would decrease; bank customers would hold fewer deposits in the North, with the result that the Bundesbank's Target claims would fall.

On its own, however, this would not make the banks in the South any more stable. Rather, they would even have an incentive to riskier business models, as the additional risks would be shared by other member states.

The Target critics: Central bank money in short supply again
That is why the critics of the high Target balances do not want to create joint liability, but incentives for the southern countries to make their economies and banks really more stable and thus prevent bank customers from keeping high deposits in the north of the monetary union. This is a comprehensive task to which the ECB can also contribute a lot by making central bank money scarce again.

At present, banks at the ECB receive virtually unlimited central bank money – even at zero interest. It is of secondary importance for them when investors withdraw credit from them and transfer it to the North. Banks are sealed off from the competition for central bank money. They have not enough incentives to courageously reduce their bad loans or the much too high holdings of government bonds and thus make themselves attractive to investors.

If the European Commission’s preference for a Eurozone suitor for Deutsche Bank rather than a domestic merger candidate is any guide, we can conclude that the Eurozone bureaucracy continues to favour a continued drive towards cohesion and banking union. In fact, if we simply look at the measures which have been taken rather than the bluster of the media, nothing has happened to change the direction of policy in the EU towards further cohesion.

The suggests the point made above about the Southern European banks having little incentive to clean up their balance sheets and begin to make loans again is accurate. That also means the potential for continued support from the ECB and a lag in any tightening is the base case. 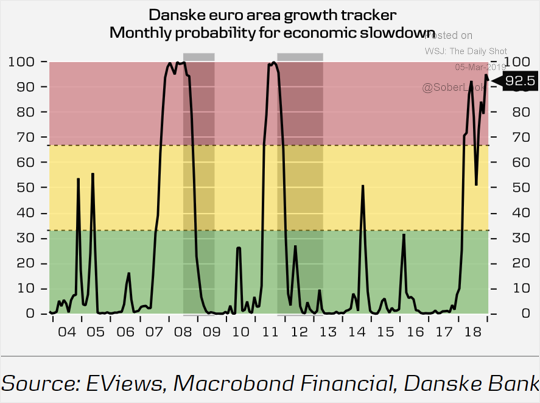 This graphic from Danske Bank highlighting the heightened recession risk in Europe suggests clear potential for the ECB to re-engage with outright stimulus, potentially as soon as later this year. 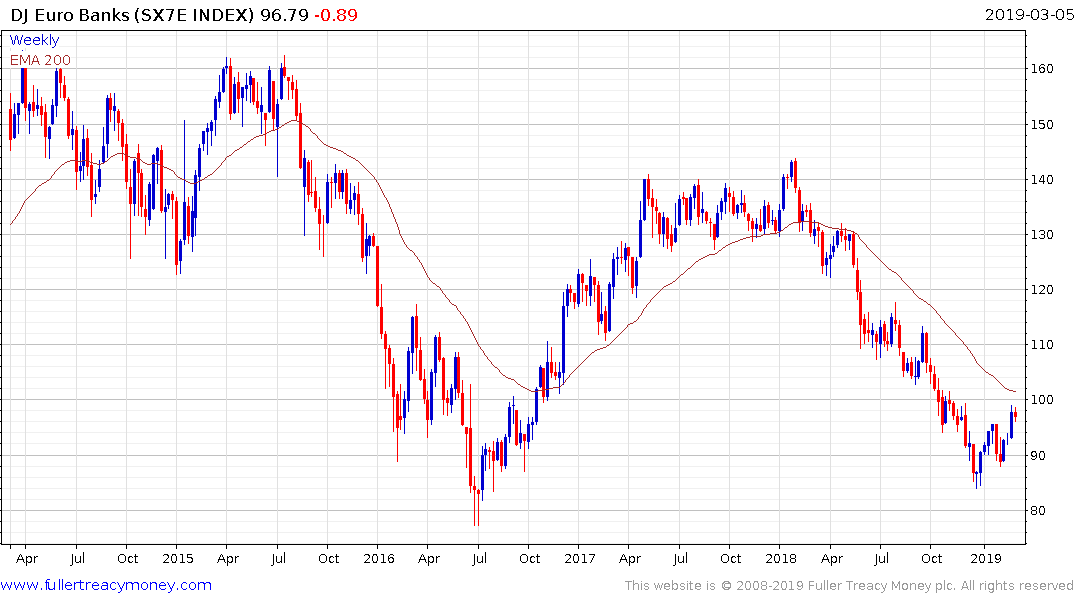 The Euro Stoxx Banks Index has now posted a higher high and a higher low during its rebound from the late December low and in the process has unwound most of the oversold condition relative to the trend mean.

A sustained move below 90 would be required to question medium-term scope for continued higher to lateral ranging.