The Markets Are a Jungle. Good Thing Felix Zulauf is Your Guide
Comment of the Day

The Markets Are a Jungle. Good Thing Felix Zulauf is Your Guide by Eoin Treacy

Here is a link to the full interview and here is a section from it:

For one we have left the world of free markets and entered the world of managed economies. This is a major change in my lifetime. Central banks took over the running of economic policy after the financial crisis and run the show to this day. Also, the globalization movie is starting to run backward. The past 30 years saw the biggest globalization process ever, with the integration of China into the world economy. With today’s trade conflict, that is changing. The alternative is more regionalization of the economy, which could create problems for multinational companies.

Is a reversal of globalization inevitable?

The Northeast Asia economic model isn’t compatible with the Western model. In the West, corporations are fun for profit. In Northeast Asia, exports have been used to increase employment, income, and market share. In China, average export prices have been unchanged in U.S. dollar terms for the past 15 years, whereas the average wage has gone up six times. A company with such statistics goes bankrupt, but China has escaped that outcome through the use of debt.

The World trade Organization should have sanctioned China for applying unfair trade practices, but didn’t. Presidents Clinton, Bush, and Obama, and Europeans, were asleep. President Trump has taken up the issue, as he was elected to do. Middle class incomes in the U.S. and many European countries have been unchanged or down for the past 30 years in purchasing-power terms, while middle-class incomes in China and its satellite economies have risen tremendously. I expect the trade conflict to continue, with all Chinese exports to the U.S. subject to 25% tariffs within 12 months or so. The Chinese will lose a few trade battles but eventually win the war.

China is busy trying to paint itself as the protector of the global trade network but this amounts to doublespeak when we look at their actions rather their words. China has abused the international web of trade relationships to boost its own economy and was allowed to do so because of a mistaken belief that prosperity would breed liberalism. Western leaders bet the livelihoods of millions of their own citizens on China eventually evolving into a free market liberal democracy but that has failed to materialise. If anything, China’s authoritarianism is becoming even more engrained.

The rest of Asia is now waking to the territorial ambitions China’s leadership has and it is unlikely they will be particularly amenable to taking orders from Beijing. China’s Belt & Road reminds me of an observation made by John Adam’s “There are two ways to conquer and enslave a nation. One is by the sword. The other is by debt.” China is busy modernizing its military but, in the meantime, it has been highly active in attempting to tie countries to its sphere of influence through the use of debt for infrastructure deals. That is not long-term policy for friendly relations, especially in a democracy. 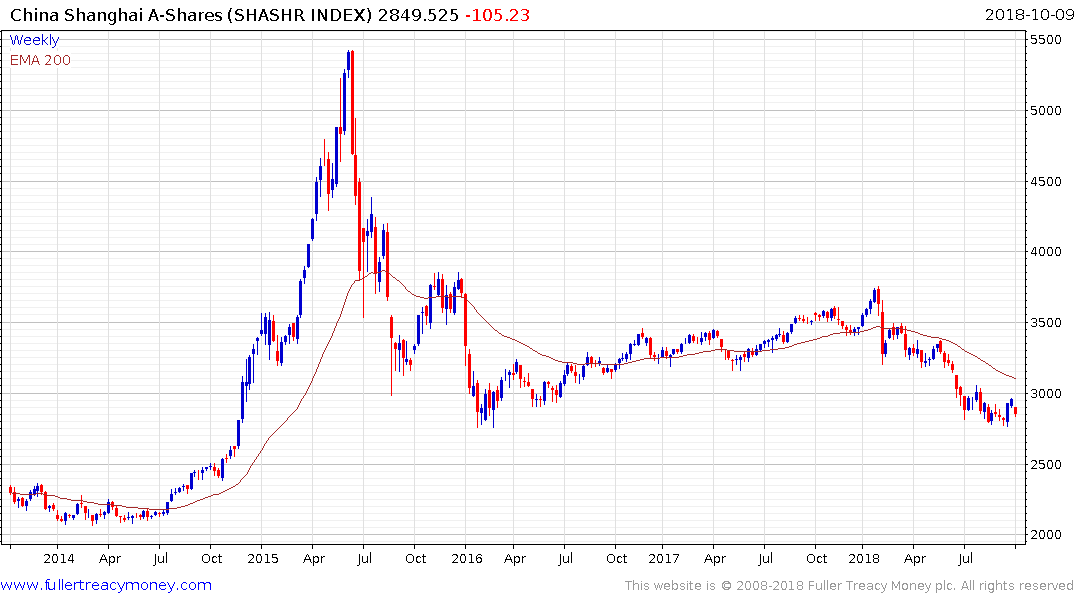 Binging on debt papers over a lot of cracks in a country’s governance. We have ample evidence of that from the OECD and China is following a similar trajectory.  I agree with Zulauf that the potential for a fiscal stimulus is increasing and it is likely a necessary condition to reignite demand for Chinese stocks.