That’s all put the economy on track for its weakest fiscal year since the last recession in 1991. Even the Reserve Bank, which rarely wades into political territory, is urging more government stimulus after cutting interest rates for the first time in almost three years.

But whether boxed in by his sunny disposition or pledges to deliver a budget surplus made ahead of the government’s shock re-election last month, Frydenberg appears unfazed. While he’ll push to pass tax cuts when parliament resumes on July 2 and ramp up infrastructure spending, that’s about it, leaving the heavy lifting of stimulus to the central bank.

“I’ve found the treasurer to be remarkably sanguine,” said Danielle Wood, an economist at the Grattan Institute, an independent think tank in Melbourne. “When you’ve got the central bank governor coming out and talking about perhaps moving to stimulatory fiscal policy as well as the need for more long-term structural reforms, I’d be hoping for a more substantive response.”

The RBA cutting interest rates to previously unimagined levels, with more to come, is a bonus for consumers with floating rate mortgages, but the wider concern is about the health of the Chinese economy which Australia depends on for export demand growth.

Australians care about property prices not least because a great deal of every family’s wealth is tied up in their homes. Housing prices have fallen 7.7% year over year which is the largest decline since at least 2003 and exceeds the mild decline Australia experienced during the credit crisis.  That raises the clear prospect of negative equity for many recent purchases against a background of high leverage ratios among consumers. 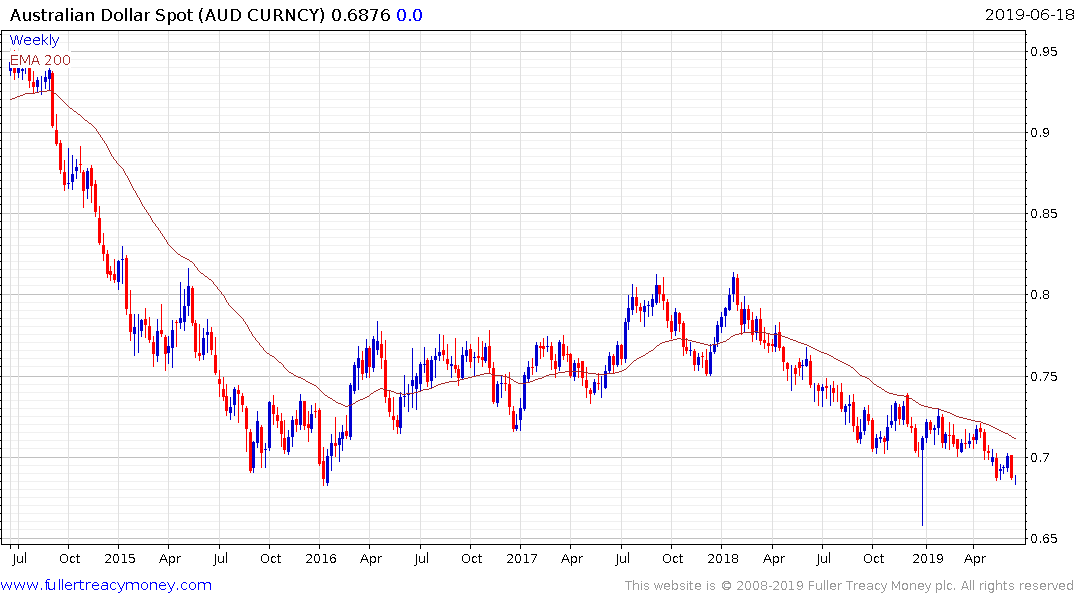 The Australian Dollar will need to sustain a move above 70¢ to begin to question medium-term downtrend consistency, but in the short term there is scope for some steadying amid an oversold condition. 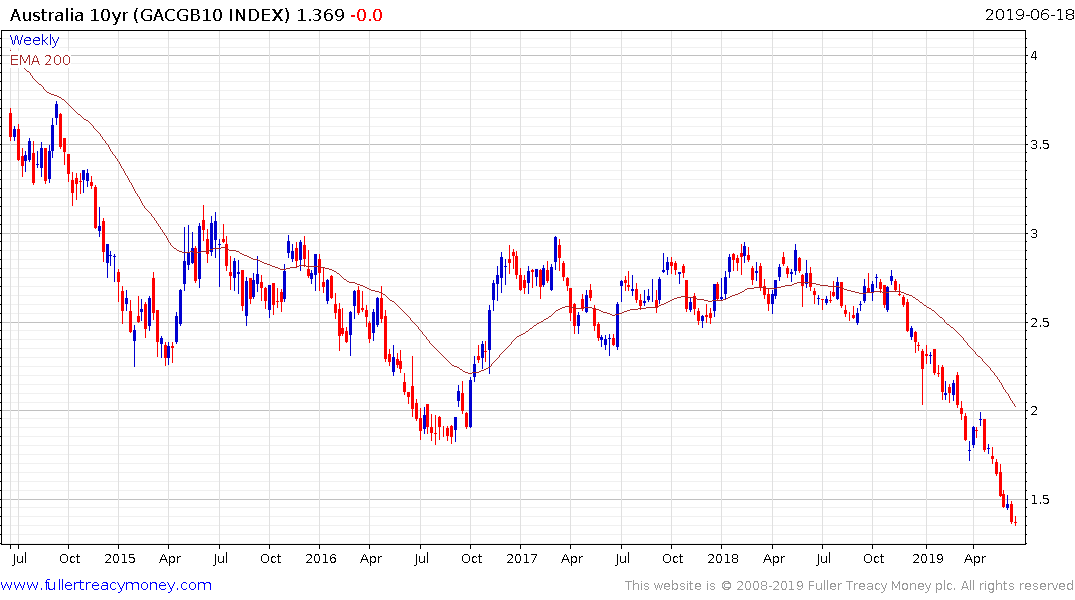 The contraction in government bond yields is overextended by any measure but a rally of more than 40 basis points would be the minimum required to question the consistency of the move. 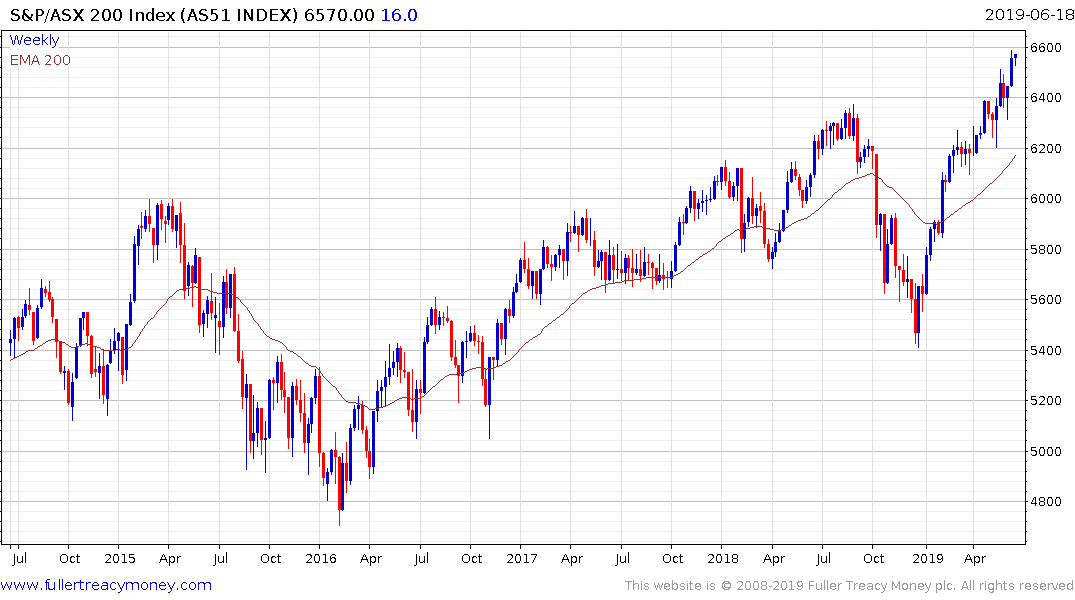 The S&P/ASX 200 continues to extend its uptrend amid enthusiasm at the prospect of both monetary and fiscal stimulus, regardless of the current demeanor of the Treasurer. 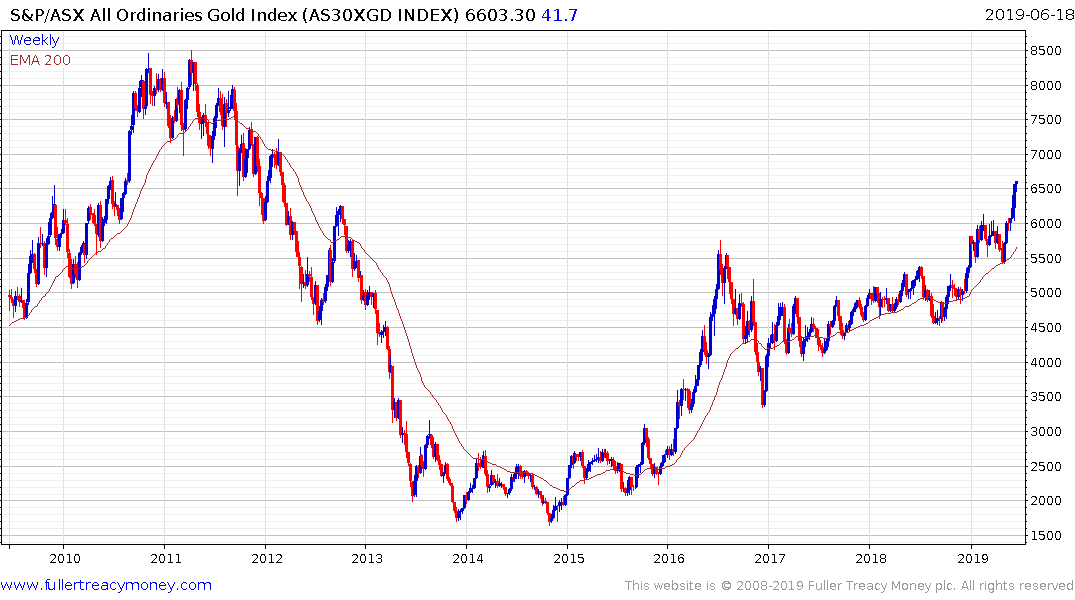 The S&P/ASX All Ordinaries Gold Index spent the first part of this year consolidating in the region of the 2016 peak and broke out at the end of May to reassert medium-term demand dominance.