When the rush for IPOs kicked off last year, stay-at-home technology dominated the scene, seizing on investor interest in anything digital, while special-purpose acquisition companies also flooded the market. This year, with stocks continuing to push skyward, the trend has broadened to include renewable-energy companies and online retailers.

Everyone from Swedish oat-milk company Oatly Group AB to bootmaker Dr. Martens Plc sold shares in 2021. Still, tech accounts for a big chunk of the deals. Didi Global Inc. will rank among the biggest U.S. IPOs of the past decade if the Chinese ride-hailing giant carries through with plans to sell as
much as $4 billion in stock.

“The markets from New York to Hong Kong were on fire in the first half of this year and have left even the late 90s dotcom boom era in the rearview mirror,” said Aaron Arth, head of the financing group at Goldman Sachs Group Inc. in Asia ex-Japan.

The boom has been fueled by a torrent of cash that central banks have pumped into the economy and the rise of individual investors, who are eager to buy a piece of their favorite companies.

It’s delivered a windfall for investment banks around the world, who reap the rewards from underwriting and advisory fees. Goldman and Citigroup Inc. rank Nos. 1 and 2 in the global
league tables for IPOs this year.

With so many companies rushing to market, the industry is starting to look saturated. Investors say they can afford to be picky and are increasingly reluctant to pay steep valuations demanded by the fast-growing companies that populate the IPO market.

As a result, a number of high-profile stocks have stumbled in their trading debuts this year and some companies are getting spooked. Food-delivery startup Deliveroo Plc plunged 26% on its first day of trading in London, while Oscar Health Inc., the insurance startup co-founded by Josh Kushner, has fallen 40% since joining the New York market.

The best time to sell your company is when you think you can get more for it than you believe it is worth. This is a good time to sell. Valuations are high, credit is abundant and fears about inflationary pressures create urgency to get a deal done. The additional point is that many upstart companies eschewed IPOs in the decade after the credit crisis. They didn’t need to raise money in the public markets because credit was free and venture companies were eager to pursue growth.

That changed from late 2019. The inverted yield curve, rising high yield spreads, illiquidity in the repo market and then the pandemic alerted investors to the risk of losing everything if the market crashed. The result is sellers are at least as eager as buyers and not least because many companies still have an uncertain route to profitability despite outsized growth in 2020. 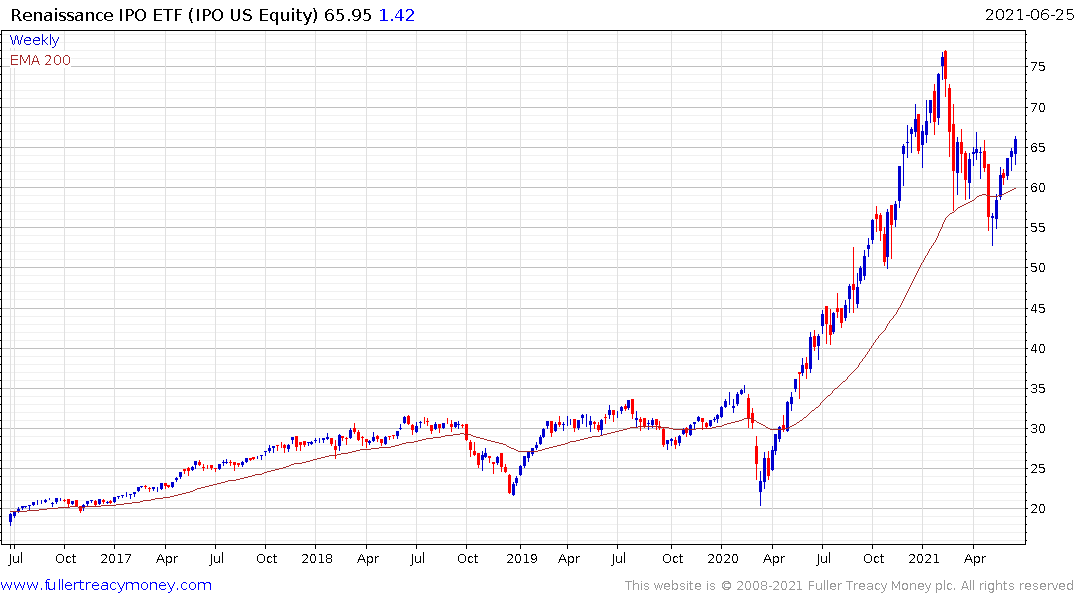 The IPO ETF continues to rebound from the region of the trend mean and is currently testing the March/April highs.

The IPOX China Index which includes both IPOs and high momentum relatively new entries is firming from the region of the trend mean.

What I find especially interesting is that the growth sector, which IPOs represent, tends to rebound strongly every day bond yields decline. Today was another good example of that. The relationship also works in reverse but the declines have tended to be smaller. 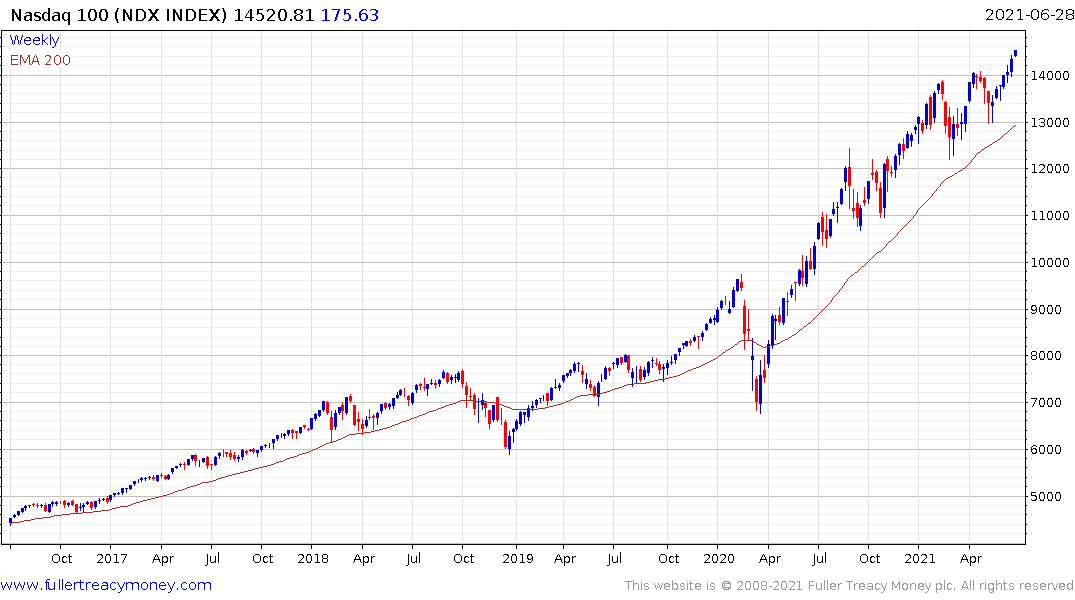 The Nasdaq-100 continues to extended its breakout to new all-time highs as yields remain contained.