The IEA Ushers In The Coming Oil Crisis by Eoin Treacy

While supply has been challenged, demand remains extremely strong. Global demand for LNG is robust as weather events and strong economic demand from China and others has led to surging prices and tight markets. Notably, high temperatures across Asia have led to strong demand for electricity to power air conditioning in Bangladesh and India (a sign of the S-Curve). At the same time, Brazilian drought conditions have resulted in lower-than normal hydro availability. Global spot LNG prices averaged $14 per mmbtu, the highest levels since 2013 and above oil-linked parity. Exported US LNG has clearly had no problem being absorbed in the global market, despite having grown from nothing as recently as 2017 to an incredible 10 bcf/d today — up 3 bcf/d in the past year alone. We have long argued that global demand for LNG was much greater than anyone believed possible. As emerging countries become wealthier, they seek cleaner forms of power of which natural gas is the most effective. Gas bears have long argued that excess natural gas supply will eventually break the linkage between global LNG prices and oil prices that has long been central to long-term LNG contracts. The fact that spot LNG today trades above its oil-linked parity suggests to us the market remains very tight. We continue to believe that the global seaborn gas market will continue to absorb new capacity from the US going forward.

The main challenge faced by US natural gas has been the unrelenting growth of the Marcellus and Permian. If we are correct and both plays are entering the early stages of exhaustion, then a new gas bull market has likely started. Production data seems to suggest we are correct and now anecdotal evidence among the producers points that way as well. Inventories are now beginning to get tight relative to seasonal averages and the US will likely enter the withdrawal season vulnerable to any bout of colder-than-normal weather. The great bull market in natural gas has begun.

The team at Goehring & Rozencwajg have been steadfast in their belief that the biggest shale regions in the USA are peaking. They first floated the idea more than a year ago and are now coming back with data to support the claim. It’s an incredibly important assertion since so much non-OPEC supply growth has been dependent on the unconventional sector’s success over the last decade. David and I were among the first to forecast the USA would become energy independent. A peak in shale production would endanger that condition. 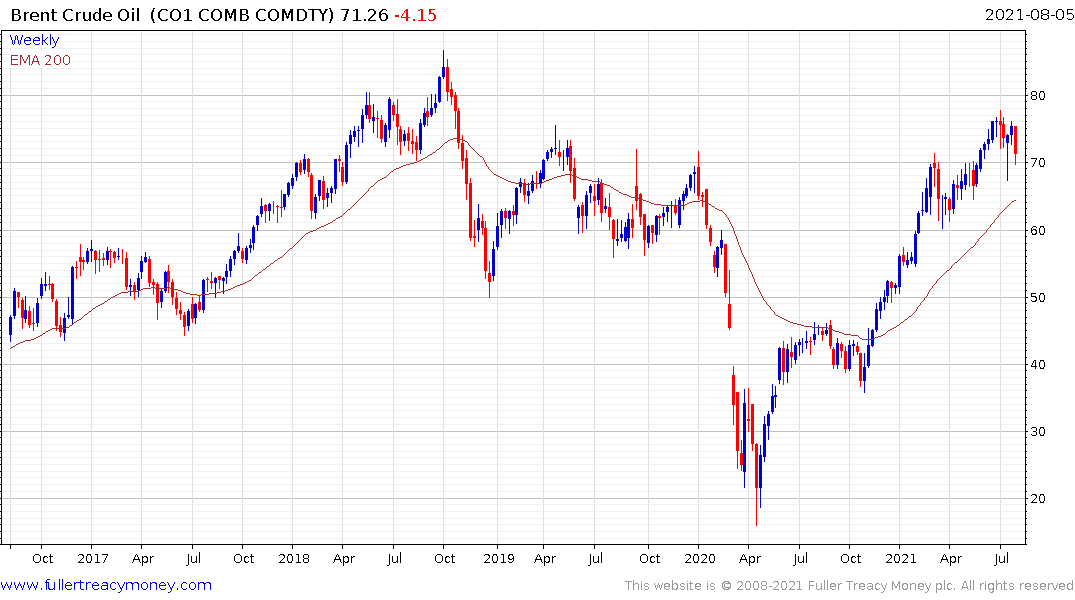 The pandemic has been a massive shock for the shale sector and the big freeze earlier this year also damaged the ability of the sector to bounce back. Many of the big shale producers hedged production at rates below today’s levels so they have less incentive to boost supply at this stage. Therefore, it is risky to make the ascertain that the Marcellus and Permian basins are peaking.

However, the point made in the above report that M&A activity is picking up is relevant. In addition to natural gas movement, Royal Dutch Shell is selling its shale properties. Occidental Petroleum is also looking for joint venture partners in Delaware as it seeks to pay down debt following the acquisition of Anadarko. 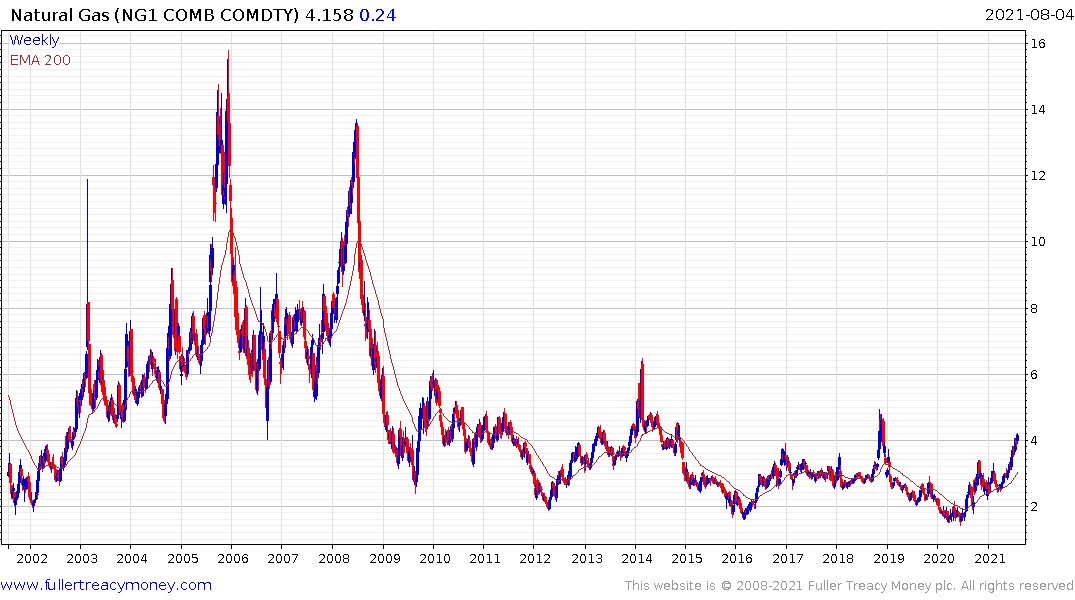 Natural Gas prices are now trading above $4. The price has been unable to sustain moves above that level since 2014. That suggest a sustained move above $4 will be required to even begin to given credence to the limited supply argument. 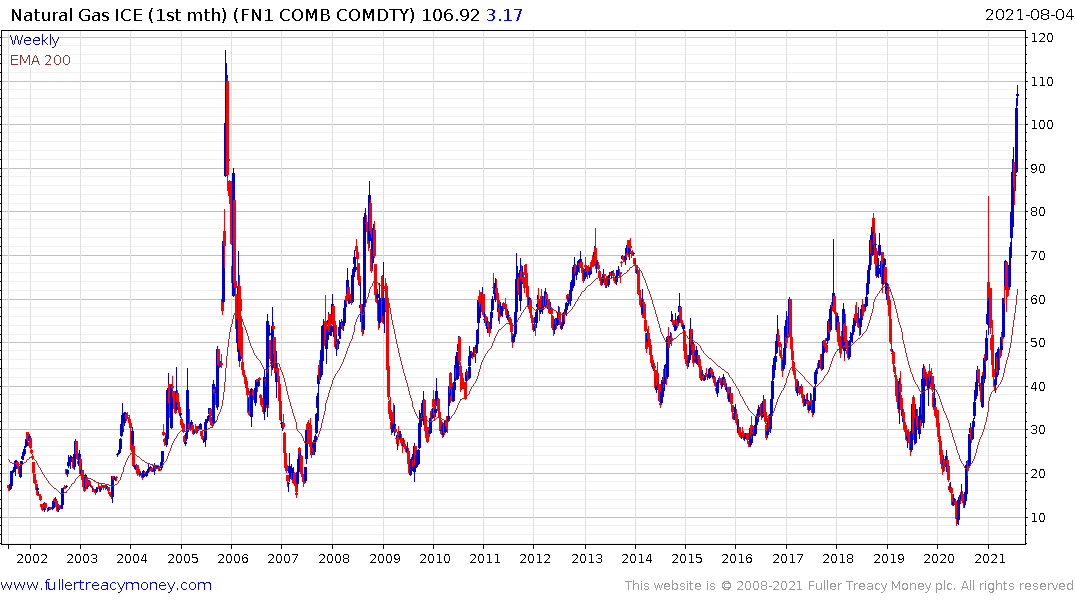 UK natural gas prices only traded above £80 for a brief period in 2005 and 2008. The price is now accelerating above £100. A clear downward dynamic will be required to check momentum.

I have a lot of sympathy with the demand growth story for LNG from emerging markets. It’s the most natural beneficiary from a migration away from coal. That’s true regardless of the zero carbon arguments currently circulating, or California’s determination to do away with gas fired appliances. The merger between Santos and Oil Search in Australia, announced this week, has potential to create a significant player in the LNG market. 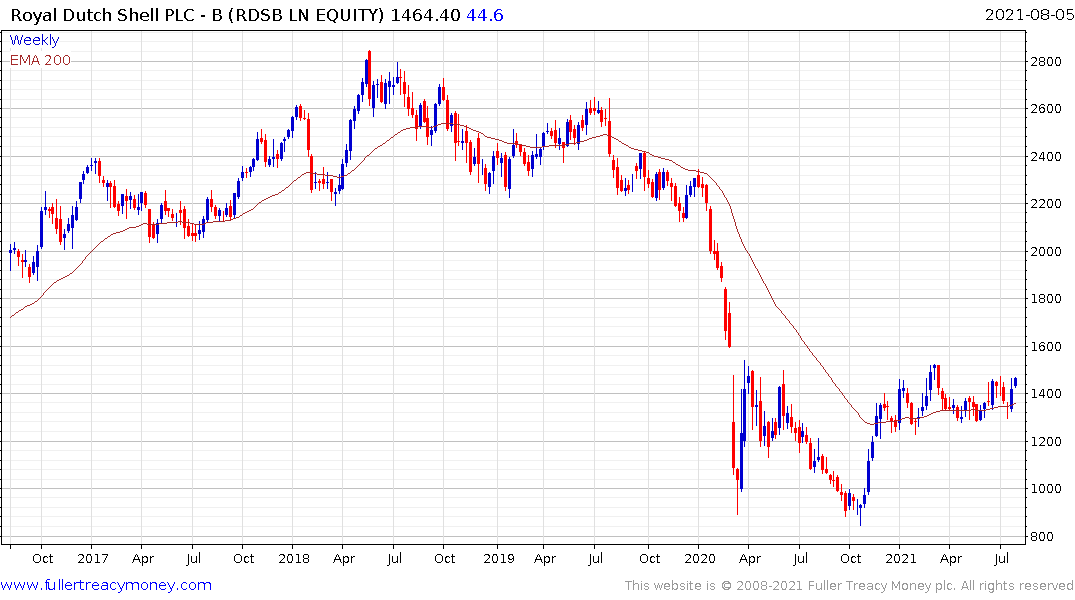 Royal Dutch Shell is primarily a gas play. The share rebounded impressively over the last week to retest the upper side of its year-to-date range. A sustained move above 1500p will be required to confirm a return to demand dominance. 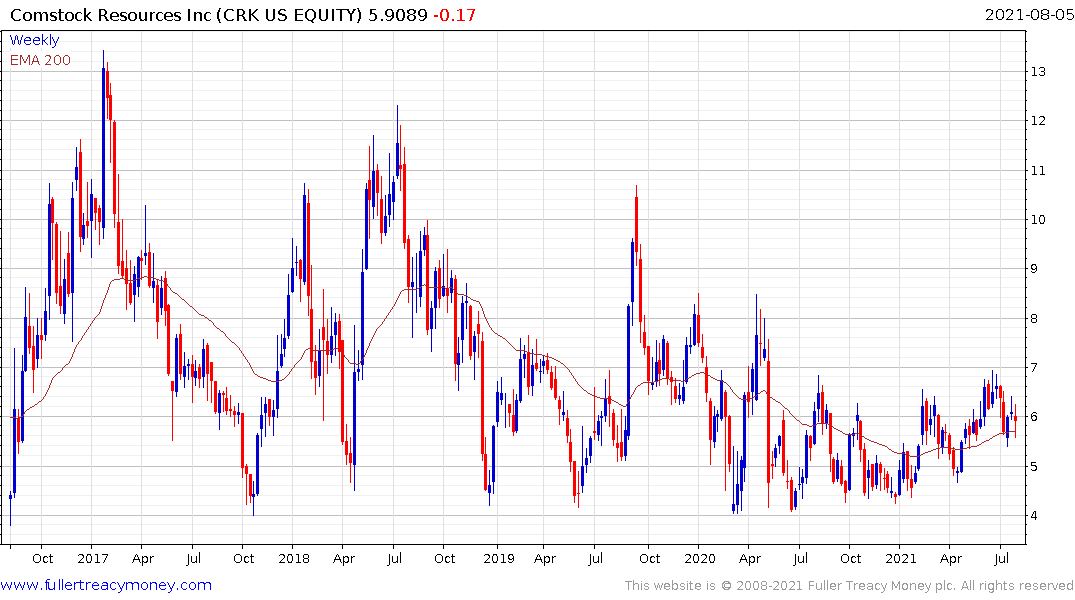 Comstock Resources has a rounding characteristic within its base that is generally associated with accumulation.

It’s worth considering that the only missing ingredient in the nascent commodity bull market has been the absence of a bull case for oil. If unconventional oil supply does in fact peak that would remove any doubt that an oil bull market is unfolding which would increase the cost of production of everything else. 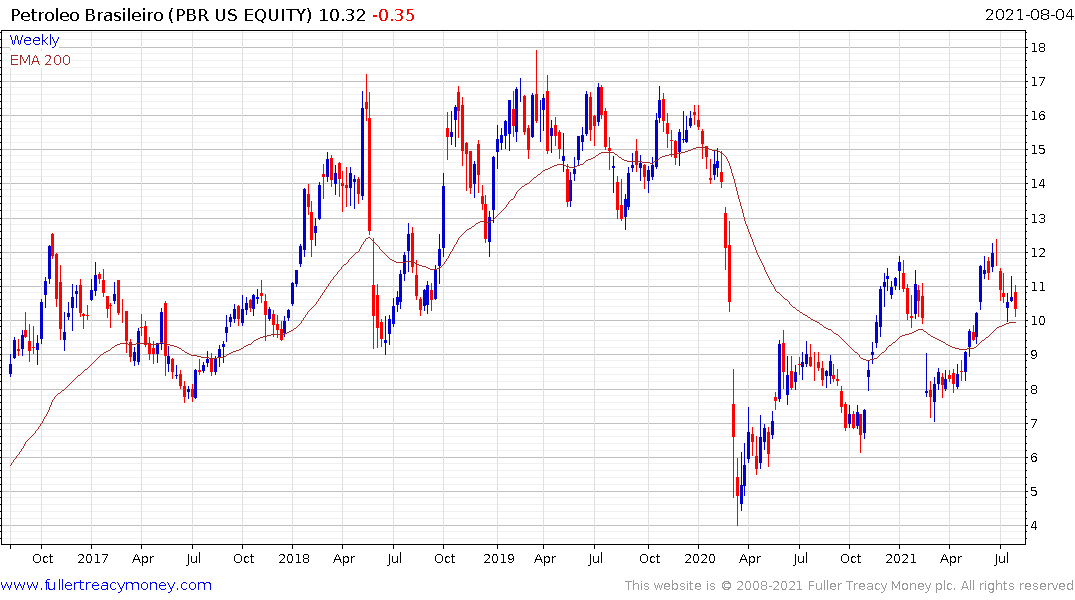 If that does in fact turn out to be the case then higher cost of production plays would offer leverage to the oil price. Petroleo Brasileiro continues to hold a sequence of higher reaction lows within its base formation. 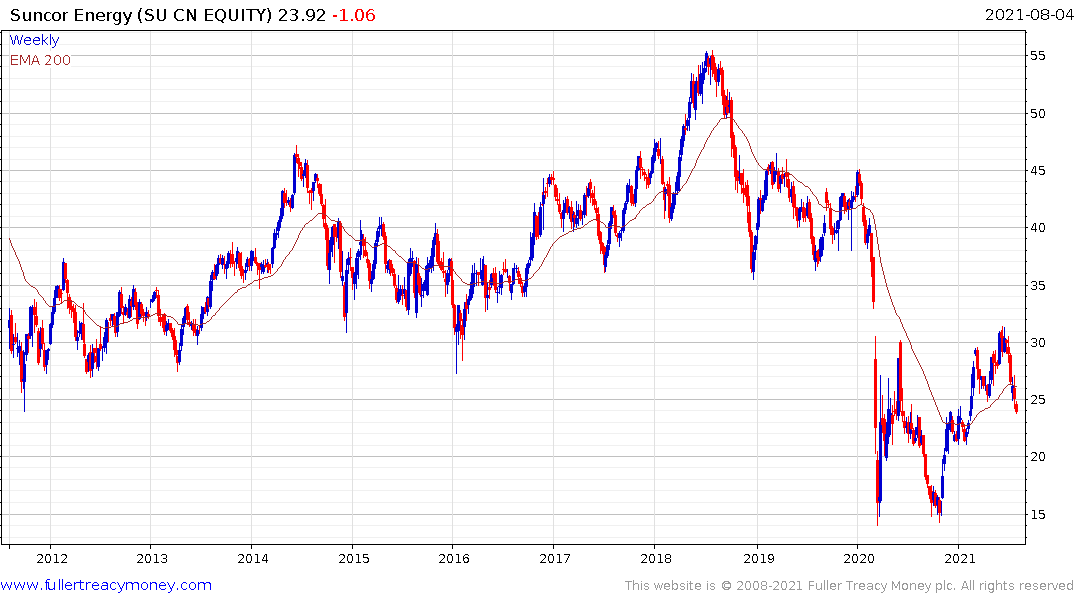 Suncor Energy is still struggling to push back up into the overhead trading range. A sustained move above $30 will be required to signal a return to demand dominance beyond short-term steading. 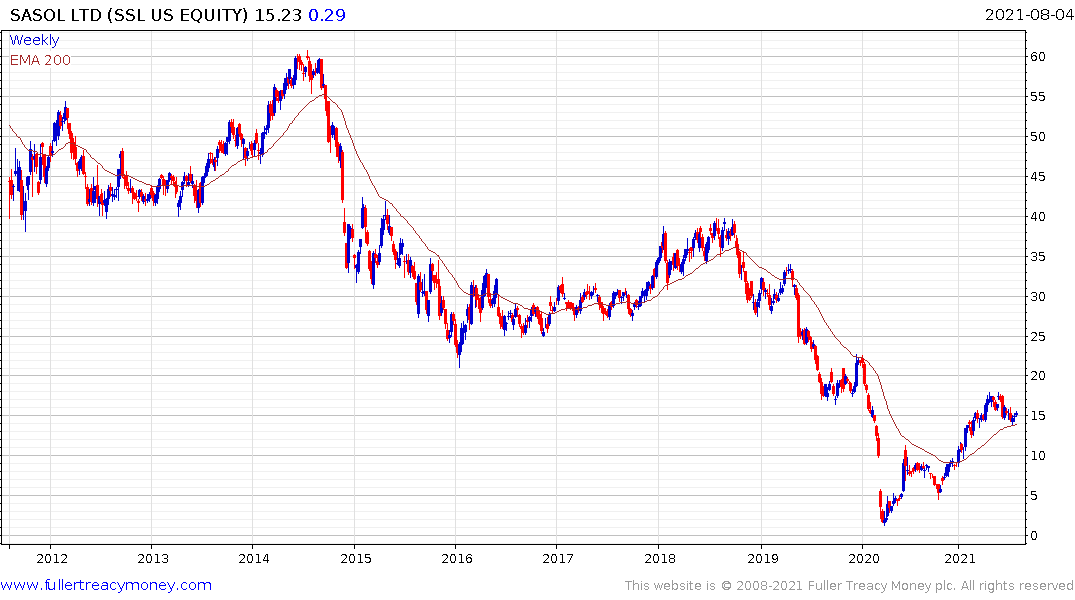 Sasol will need to hold the region of the trend mean if the benefit of the doubt is to be given to the upside.