Let’s zoom out for a second. All blockchain-based systems share two basic ideas. The first is that for the first time you can have a thing online that can be probably yours. A coin, a token, an NFT… whatever it is. You have it and control it and no third party has any say. Alice can own something and then send it to Bob. Alice doesn't have it anymore and Charlie can't interfere. The other core idea is that part of achieving this involves a sufficiently decentralized network of computers, such that no individual, company, or government has a say in what goes on.

But this is where the fork in the road emerges. The Bitcoin vision is to create a new form of money outside the authority of any central issuer. The DeFi vision inverts this, and takes the money creation part for granted. After all, you can spend a dollar on the Ethereum network using a USD-backed stablecoin, so why reinvent the wheel? Instead, the DeFi-based vision is to build unstoppable blockchain-based software and services that then do something with this money.

A couple weeks ago, I wrote that Wall Streeters are increasingly getting ETH-pilled and the above is why. There’s a certain concreteness to the value proposition. If a decentralized network of computers can match borrowers and lenders in some powerful and novel way, then the software and the tokens that power it should be valuable. And in general, this vision jibes much more with the Silicon Valley ethos. Trying to create a new form of money? That’s not really a thing you learn about at Stanford. Writing software to disrupt traditional financial services? That they get. Furthermore, Bitcoin frustrates many people in tech because of the community’s move slow and don’t break things approach.

All this being said, all these different factions and visions… they remain something of an inside game. It’s not clear how much your average crypto investor is paying attention to any of these different modes and models. If you look at the coins, you’ll mostly see a high degree of correlation. Either they’re all going up at the same time or down at the same time. This includes Bitcoin and Ethereum and Solana, but also a bunch of other coins that don’t map to a trendy narrative. (For example, Litecoin is still one of the world’s biggest coins despite its founder having peaced out from the project in 2017, and neither has a store-of-value narrative nor a DeFi narrative or anything else really.)

Here’s a chart of Ethereum, Bitcoin, and Litecoin going back to the summer of 2017. You can see, everything just kind of rises and falls at the same time.

The market strongly gives off a vibe of people wanting to get into crypto and then placing their chips on a bunch of different squares without too much thought. Maybe they buy a few that they’ve heard of, maybe they buy a few with a low nominal coin price because it’s fun to have a lot of coins and maybe they buy a few that just seem interesting. That still seems to be how flows work in the space. And as long as this is all the case, we’ll probably still have these generalized boom-bust cycles where coins rise and fall together along with the animal spirits of investors and traders.

I found this article to be very well argued because it clearly makes the differentiation between the store of value argument and the decentralized finance trend. Google’s ad engine is more targeted and cheaper to use than magazines or newspapers. It’s the perfect example of how technology is capable of delivering a solution that is better and creates a store of value for investors. This is where the potential future of the cryptocurrency sector resides.

There are inefficiencies everywhere in the economy. Some of these exist because of supply chain difficulties. We have plenty of examples of those at present. Others arise because of labour costs. Unions, governments, regulations combine to make the labour market less than efficient. These are hard issues to resolve and software has a hard time dealing with people.

Regulatory bottlenecks are therefore where many technologies tend to focus. The strict need for an insurance broker, doctor, lawyer or accountant, for example, is dictated by regulations that are strictly enforced. The regulations supporting the value of taxi medallions were less strict which allowed companies like Uber to flourish.

The decentralized finance sector (DeFi) looks hungrily on the financial sector in the same way that stock boiler room operators attempt to compete with established brokers. At present they operate outside of the regulated sector which is attractive all around. When there are no rules, you can do pretty much anything you want; like selling an invisible sculpture for $18000.

Alipay and WeChat Pay achieved their market position by avoiding the regulations imposed on banks that limited deposit rates for example. The ease of use they provide is a signification feature but the deposit growth was entirely driven by higher interest paid relative to the established banks. Defi companies are attempting to do the same thing with established financial sector companies. 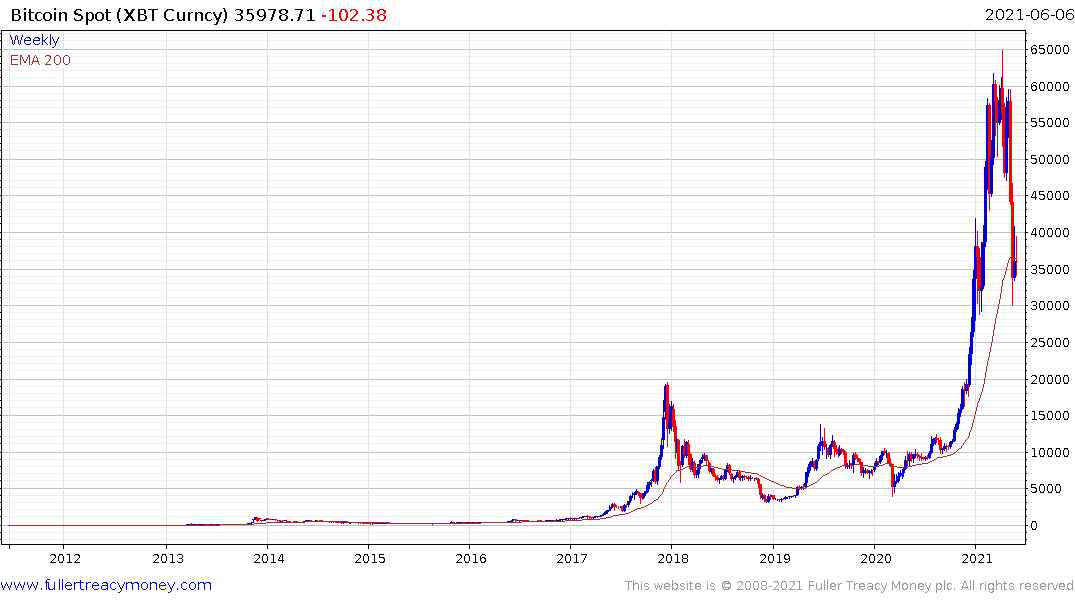 Historically, technology has resulted in dematerialization. It’s tempting to think that cryptocurrencies are already in the online world but anyone who has ever engaged with the market is familiar with how many steps are required to transact and particularly to ensure security. Ultimately, the solution will be cheap, fast and invisible. The price of transactions will be built into the service somewhere on the supply chain.

Stock markets do not have to be the only place where networks values are traded. That’s where the argument for investing in a large number of different tokens resides. The problem is when a small number of clear winners evolves, all of the losers will be worthless. Today, no one can say with confidence which will eventually succeed. Investing when the dust settles will still be incredibly lucrative over the long term. That’s why I am not in a hurry and regard tokens as trading vehicles for the present time.

The project I find most interesting is IOTA but there is no evidence the progress made to date is gamechanging, although the potential certainly exists.