The History and Future of Debt
Comment of the Day

The History and Future of Debt by Eoin Treacy

Fast forward to the present day and we look like we've recently entered another long period in which yields will artificially be kept well below nominal GDP. In our sample of the largest 32 DM countries, only four currently have 10yr yields above NGDP. The problem in sustainably recreating such a scenario today is that the post-WWII era saw much higher levels of GDP growth due to favourable demographics, post-war reconstruction, and high productivity growth. It will be nearly impossible to manufacture a repeat of such an outcome. We will only get closer to it with significant 'artificial' fiscal and central bank interventions. Whether such central bank money printing ever gets repaid or is simply inflated away is open to debate. Already since the GFC, government debt has effectively declined in many countries if you assume QE is never repaid. But by their aggressive actions over the last decade, central banks have effectively trapped themselves into continually intervening in government bond markets. They're arguably beyond the point of no return. If the negative gap between government yields and nominal GDP is lost, then the global debt pyramid is on very shaky ground.

Germany failed to sell a 2 billion zero coupon bond in August which was a precursor to the reversionary move seen in bond prices. However, the economy is recession and there is no prospect of the ECB raising rates. Instead quantitative easing will further increase the ECB’s holdings of regional sovereigns.

Richard Russell used to say “print or die” and that is exactly what the central banks of the world are going to do. What I find particularly interesting is the comparison with debt levels only being approximating current levels during wartime. That must mean we are in a war but this time it is with ourselves and the contention is about the ability to pay unfunded liabilities. 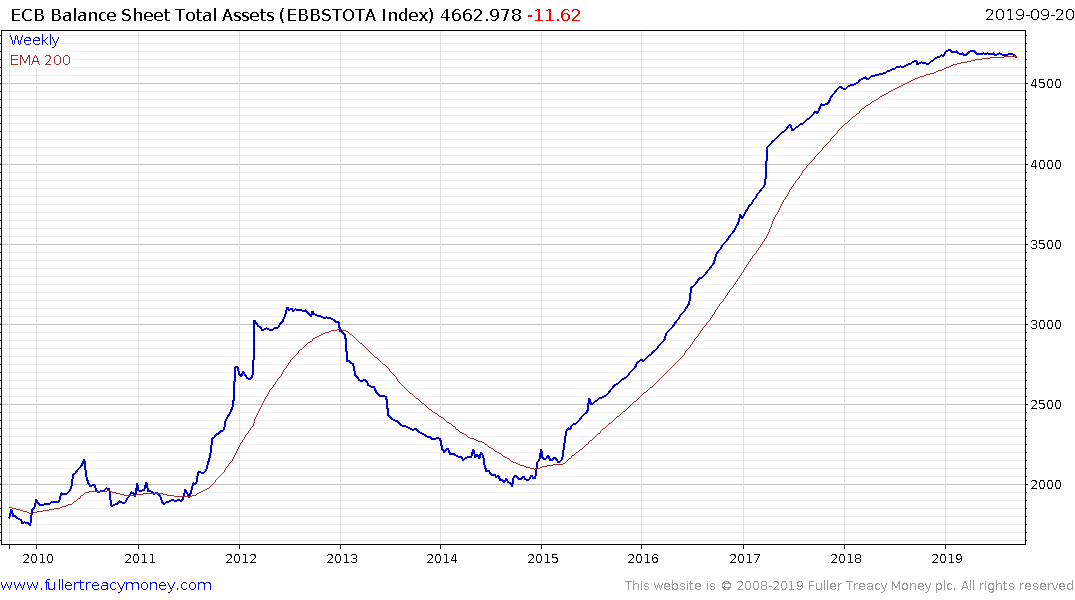 The one thing we learned from the ECB’s failed attempt to withdraw liquidity between 2012 and 2014 is the remedial action after that action resulted in the balance sheet requiring 2.5 times the amount withdrawn to get the economy back on an even keel. 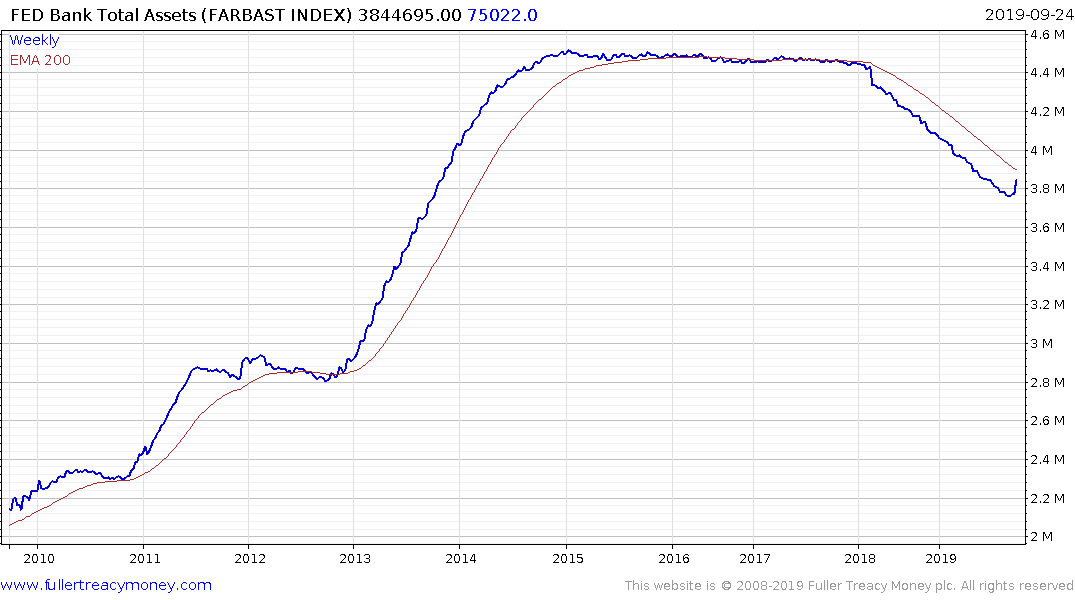 That suggests the Fed’s new balance sheet expansion could see the total rise to $6 trillion over the coming years. The potential for an open-ended repo facility is to ensure ample liquidity to the financial system is not a simple blip but is a significant development. The unquestioned tolerance of investors for continued negative yields cannot simply be assumed. The complacency relative to the risk is the clearest signal the bond bubble may be of popping. 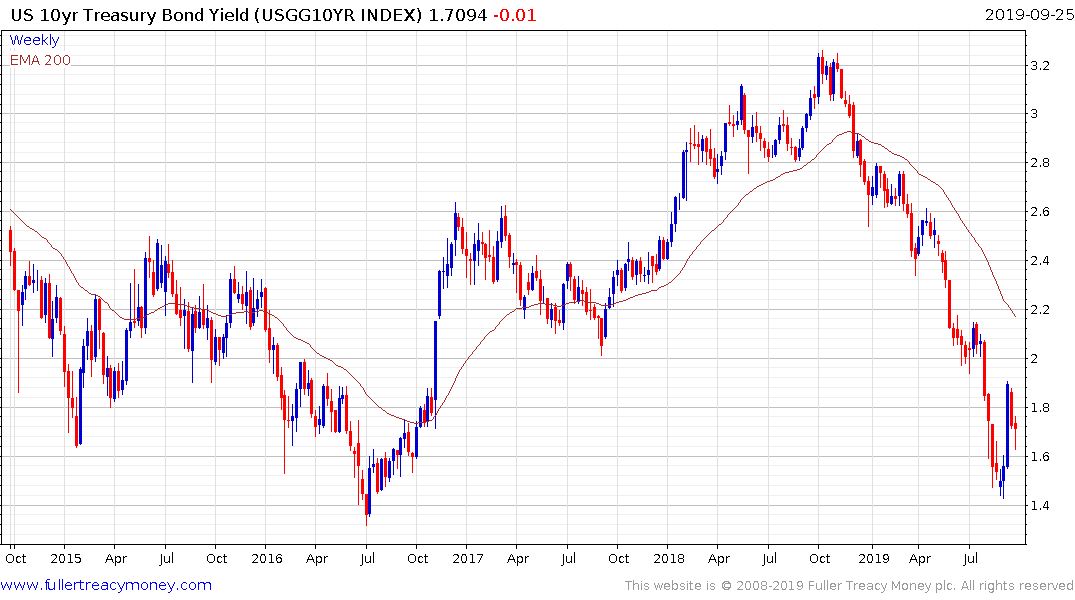 I had a long conversation yesterday with Rick Rule of Sprott Asset Management, who reported business is booming. One point he made that I found interesting was the uptick in inward calls from millennials and that nearly 40% of inward calls are from women. The demographic who are interested in the precious metals sector today is definitely broadening. 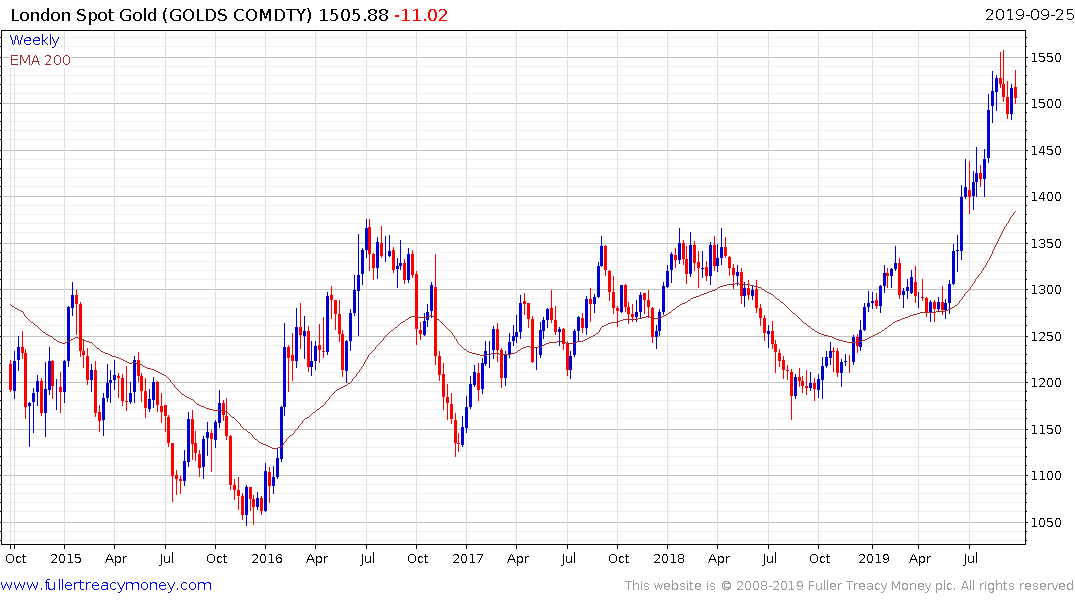 The gold price pulled back today suggesting the period of consolidation following the breakout remains underway.