Last October there was a full hike priced in, but now those expectations have completely collapsed to the point where there is two cuts already embedded into the Eurodollar futures curve.

Although it’s not quite this simple, to make money at the short end, the Fed will have to cut more than twice in the next year and a bit. Could that happen? For sure. No doubt about it. Maybe the economy hits a real air pocket and the Fed cuts aggressively. Or there is some geopolitical event and the Fed is forced to slash rates.

But the point to ask yourself is whether that is a good bet? I contend that with everyone leaning so heavily one way, the surprise will not be how much money they make, but instead if things don’t play out exactly as ominously as forecasted, how quickly the trade goes sour.

There is little room for error. Or put it another way, the global economy better collapse as quickly as these bears believe as even a lengthening of the process will make their trade unprofitable.

And in case you are bullish the long end of the curve and believe a slow-to-cut Fed is your best friend, don’t forget what Tariff Man has done to inflation. Next year should see a rise of 50 basis points across the board to core inflation. Sure commodities are falling hard, but that helps more with China’s inflation situation than with America’s.

The bond market is indeed pricing in rate cuts by the end of the year. The big question is how much of that is hedging of fears about the potential for a slowing global economy and resulting US Dollar outperformance and how much is about the need for an end to quantitative tightening in order to fend off fears about an impending recession? 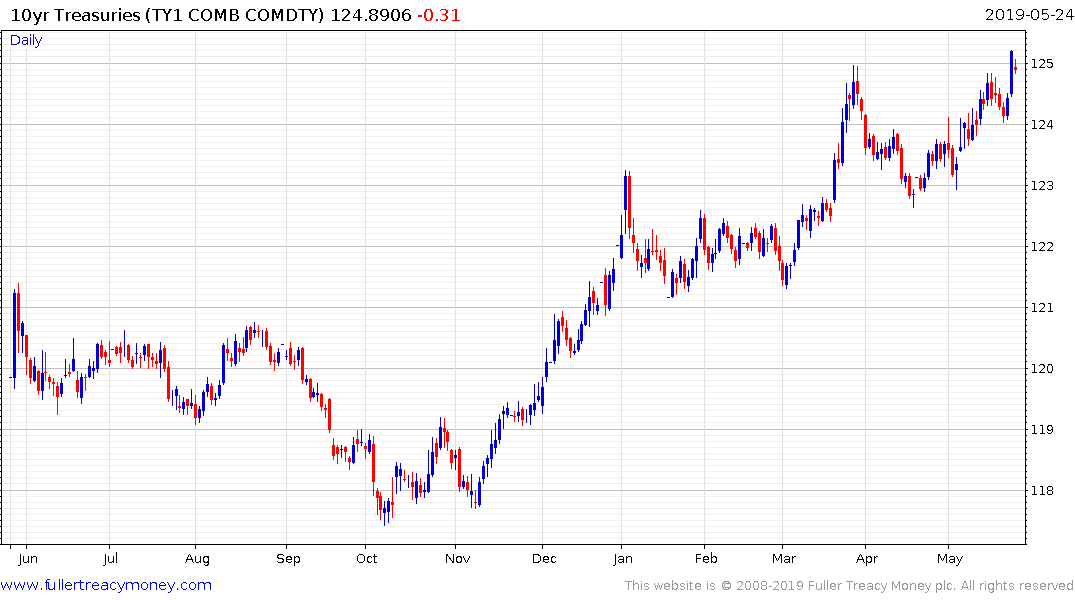 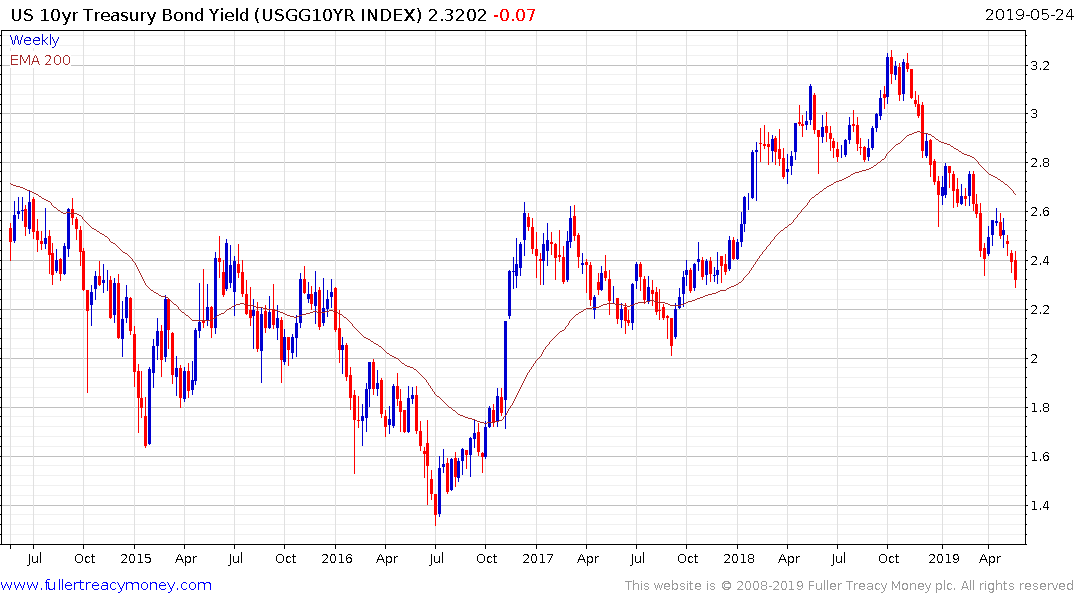 The uptrend in Treasury futures has been nothing but consistent since the failed break above 3% on the yield was confirmed in December. A consistent trend is a trend in motion so if the upside is to continue to be given the benefit of the doubt, we can expect yesterday’s breakout to be sustained, with the next area of potential resistance being at 127.5. Each of the reactions to date has bene in the region of 2.5 points so if the breakout runs to 127.5 the upper side of the most recent range at 125 should offer support. That’s what we refer to as an example of scripting what the bull market will look like at The Chart Seminar.

A failed break above 125 would obviously challenge the consistency of the trend while a break below 122.5 would break the seven-month uptrend. 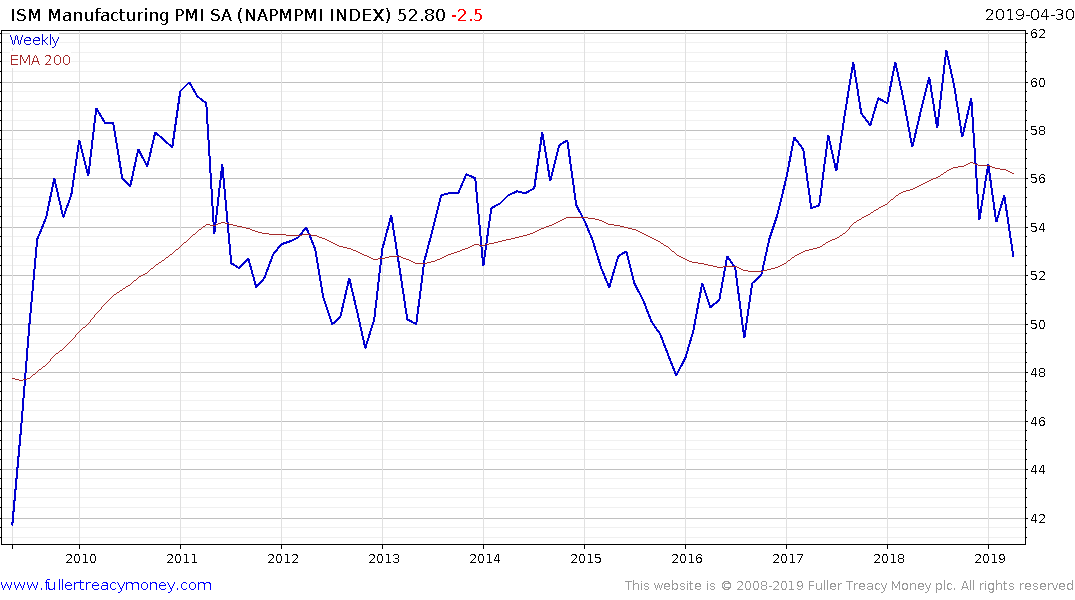 US PMI figures disappointed yesterday falling to 52.8 rather than the expected 56. That was the primary factor behind US Dollar weakness on a day when other safe haven assets like Treasuries, gold, the Japanese Yen and Swiss Franc all rallied.

The bigger picture represented by German and Japanese PMIs is manufacturing is slowing globally and that is a response to China’s economy slowing, the trade war and tighter monetary conditions. My total assets of central banks chart hit a new low last week but has been boosted somewhat this week by Dollar weakness. That is a testament to just how influential the Dollar is in global liquidity provision.

The fiscal impetus of the USA is well understood, Japan never stopped with QE and is also engaged in fiscal stimulus and Germany is now also in fiscal stimulus territory. One of the potential results of the European elections could be the abandonment/loosening of Eurozone fiscal rules which would lend a significant tailwind to the global economy. While interest cuts are being priced in there is also ample scope for fiscal stimulus. What we do know is there will be a policy response to slowing economic figures. James Bullard from the St. Louis Fed stated on Wednesday that the Fed by have “slightly overdone it” with the December hike.

It is quite normal to expect a growth scare in the 3rd year of the Presidential cycle before easing lends some assistance to a rally from oversold levels into the end of the 4th year. The big question is whether central banks and governments can act quick enough to reinvigorate growth. 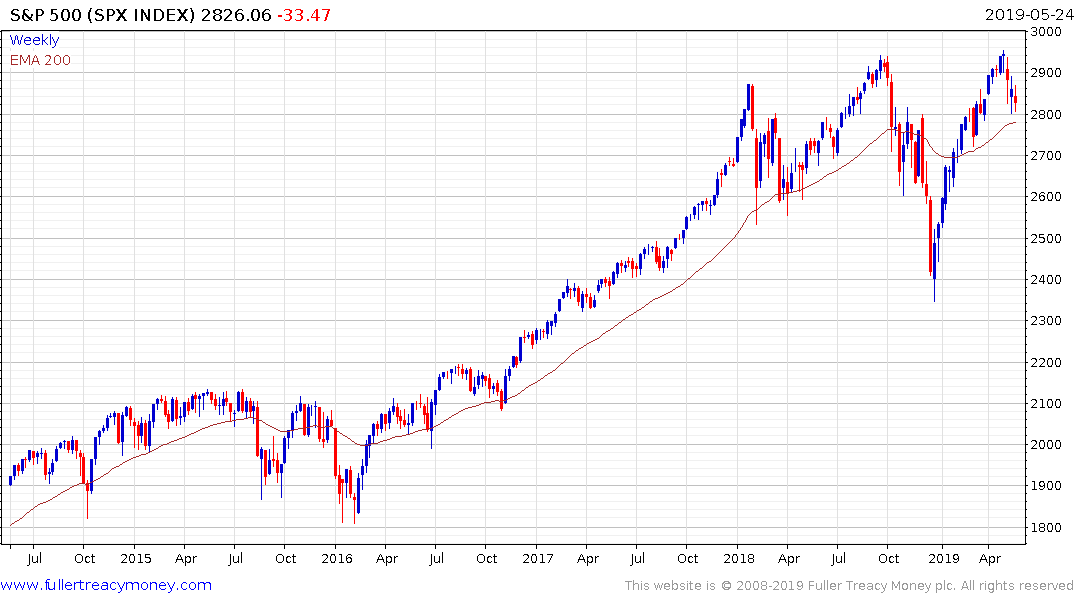 The S&P500 continues to test the region of the trend mean and a sustained below 2700 would be required to question the consolidation hypothesis.