The Great Reset by Eoin Treacy

Markets were born free but are now everywhere in chains. Cash deposit rates are now derisory, but with added bail-in risk. Bond yields are likely to remain squashed indefinitely, helped by governmental funny money. So, cash and bonds are largely out of the question. The one market too big for even the world’s central banks collectively to kick around is the currency market. So, we would not be surprised to see some kind of reset develop there. Our way of anticipating that reset is to own precious metals and the shares of sensibly priced mining concerns in “safer” jurisdictions. Because we anticipate an ultimately inflationary outcome due to those aforementioned torrents of funny money, we value claims on the real economy in the form of equity ownership of cash-flow generative businesses run by principled, shareholder-friendly management with an excellent track record of capital allocation, especially when such stocks can be bought at a discount to their inherent worth. And because we frankly have no clue how the Great Suppression will necessarily play out, we hold uncorrelated (systematic trend-following) funds that offer the potential to zig when the markets finally and conclusively zag. Our watchword: if in doubt, diversify.

Not the sort of commentary we would prefer to be sending out into the world. But sometimes spades must be identified as such. On a more positive note, some wisdom from the ages: this too shall pass. It just better gets a bloody move on.

The question for investors is whether the ECB announced additional stimulative action to support the economy or arrest the advance of the Euro. The region’s plan for climbing out of the lockdown-induced recession will be founded on exports. A weaker currency would certainly help and the ECB is delivering.

No country wants a strong currency but some need a weaker one more than others. China was first in and first out of the recession and they appear willing to allow the Renminbi to strengthen. Therefore, cross rates with the Renminbi are likely to offer the best picture of how the evolving trend of competitive currency devaluation is progressing. 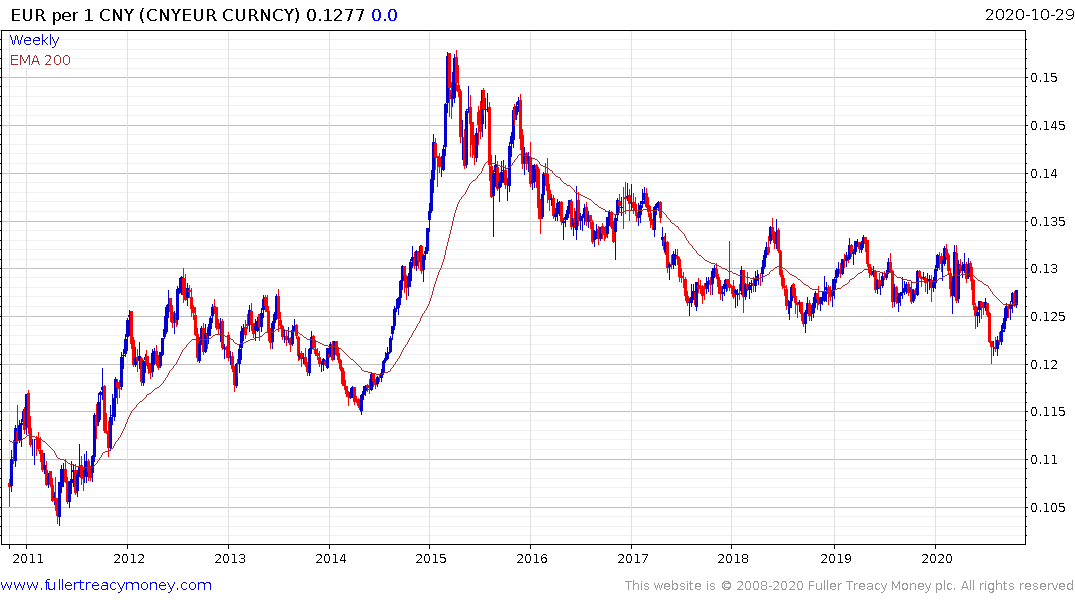 The Renminbi held a sequence of lower rally highs against the Euro since 2015. It is currently rallying but a sustained move above 0.135 would be required to signal a return to medium-term demand dominance.