The Fragile Five by Eoin Treacy

The Fragile Five – In November 2013 Morgan Stanley released a report naming the Brazilian Real, Indonesian Rupiah, South African Rand, Turkish Lira and the Indian Rupee as the “Fragile Five”. They were seen as susceptible to weakness not least because current account deficits were expanding and investors were refocusing on macro risks as normalisation of monetary policy drew closer. It is not difficult to explain why these five countries were selected since their currencies were among the weakest in the world in 2013. However, a great deal can change in less than six months and I thought now is an opportune time to revisit these markets.

The US Dollar has been trending higher against the Brazilian Real since 2011 and retested the psychological BRL2.40 on two occasions over the last six months. There is a possibility that the BRL2.40 area represents a medium-term floor for the Real and it has strengthened to test the region of the 200-day MA over the last six weeks. A break in the three-year progression of higher reaction lows would question the Dollar’s uptrend. 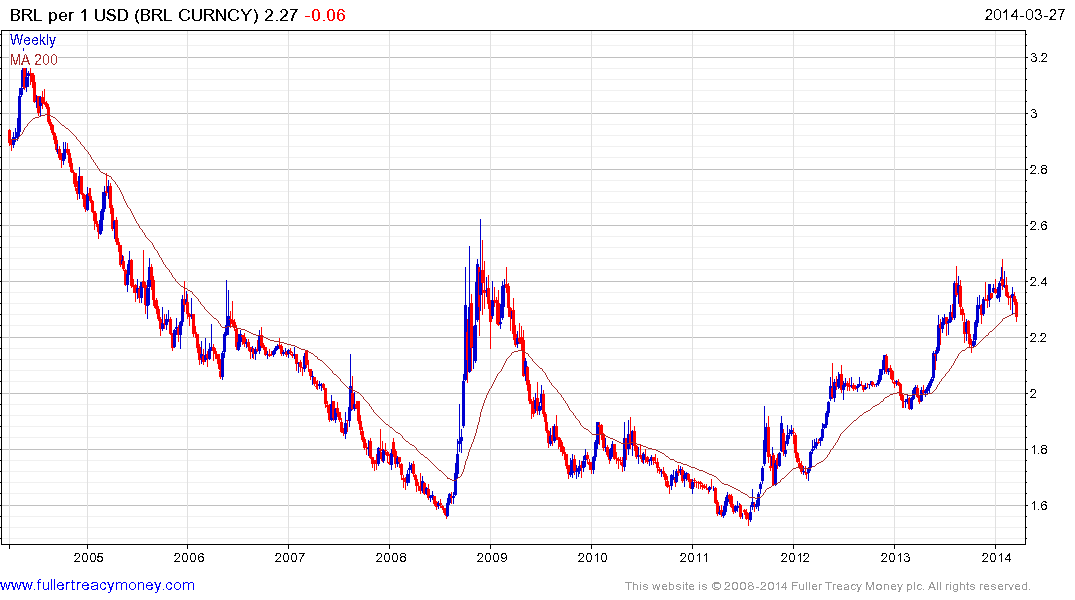 In the stock market Petrobras posted an upside weekly key reversal last week and followed through with additional gains this week suggesting a reversion back up towards the mean is underway. 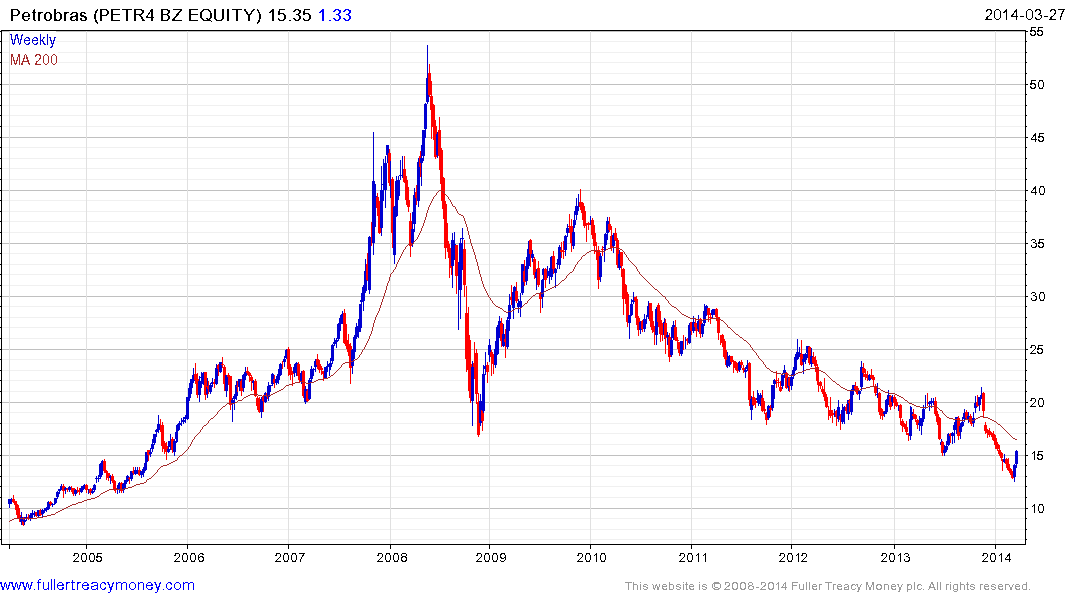 Banco Itau, the nation’s largest bank, is rebounding from the lower side of an almost two-year range. 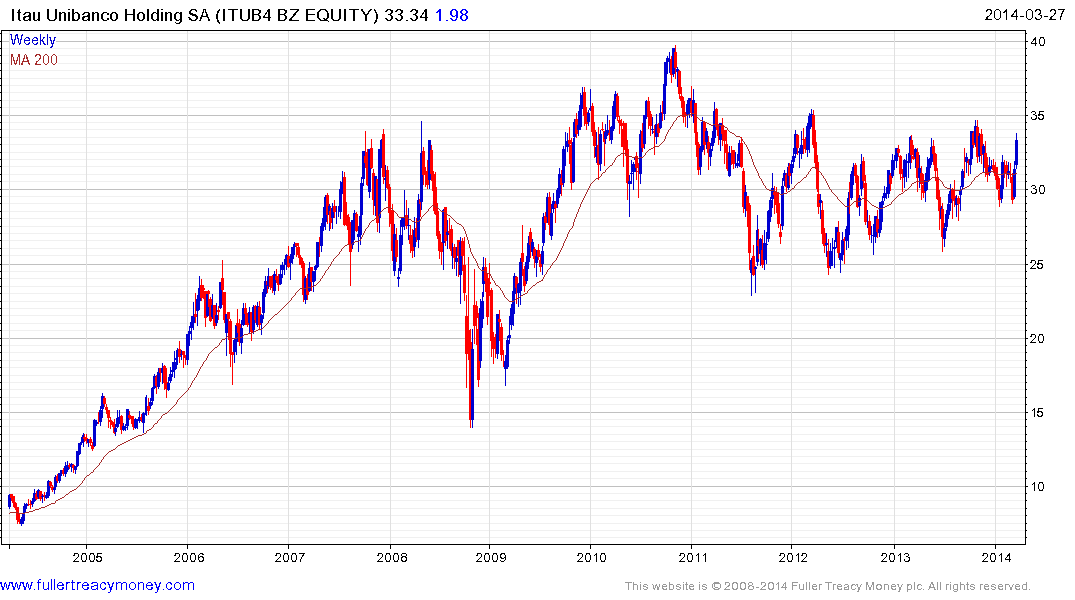 The Bovespa Index has steadied in the region of the 2013 low near 45,000 and a short covering rally appears to be underway. 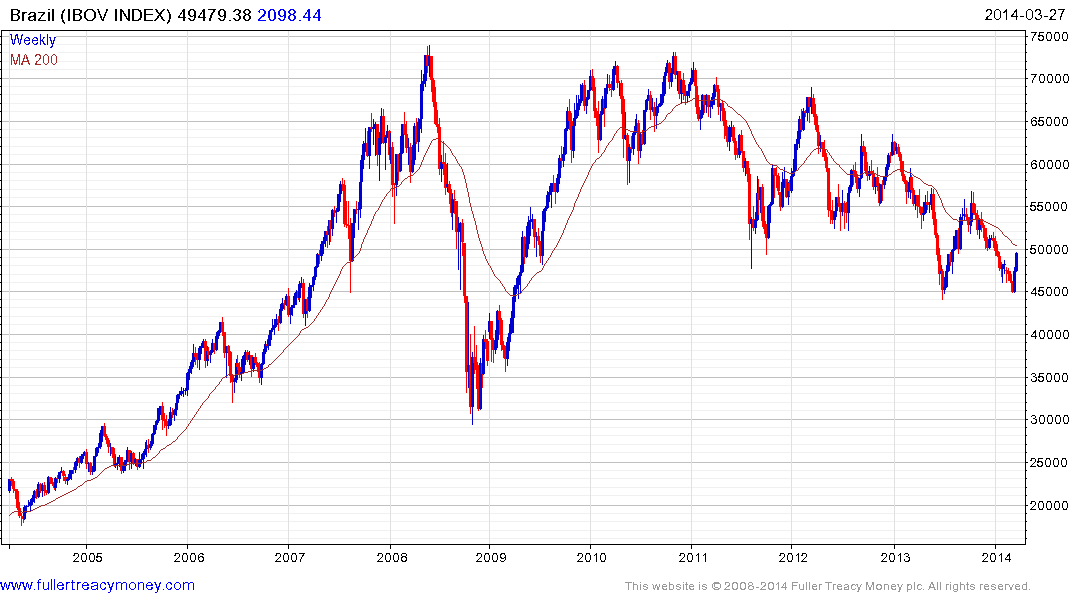 The IDR 12,000 level has offered support for the Indonesian Rupiah on a number of occasions since 2000 and the currency bounced from that level again in January. It has now unwound the oversold condition relative to the 200-day MA and will need to hold the majority of its appreciation on the next reaction to confirm a return to demand dominance beyond the short term. 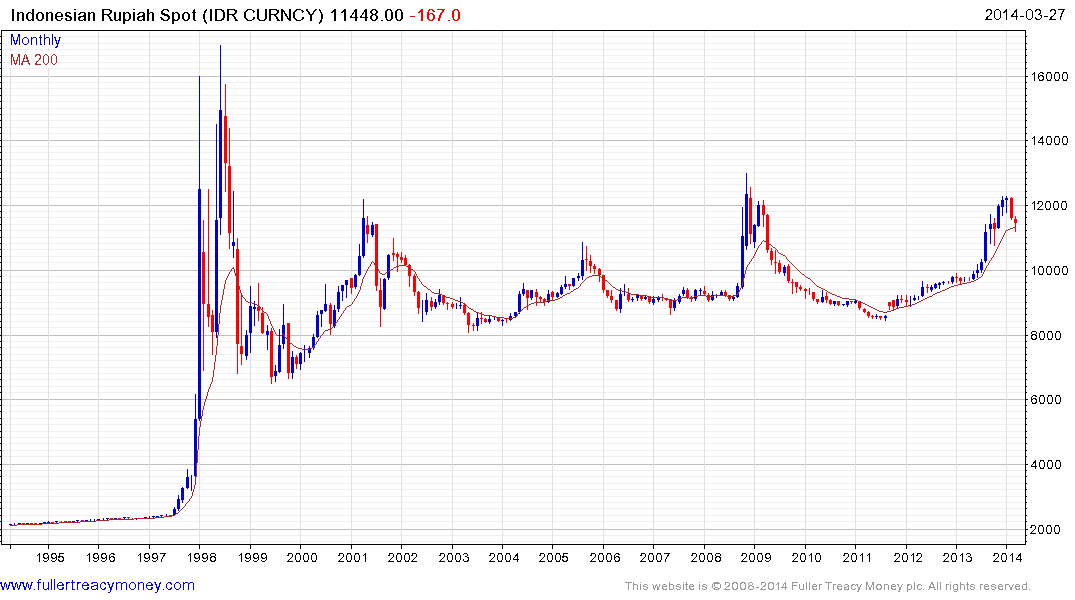 Indonesia’s upcoming presidential election in July will see 21 million first time voters. While this introduces a wild card into how they will vote, it can also be seen as a powerful expression of just how young the population is and what a benefit that is likely to be for the nation’s future productivity.   The possibility that the popular governor of Jakarta, who is noted for a hands-on approach to the problems affecting normal people, could win may act as a catalyst to reignite investor interest. 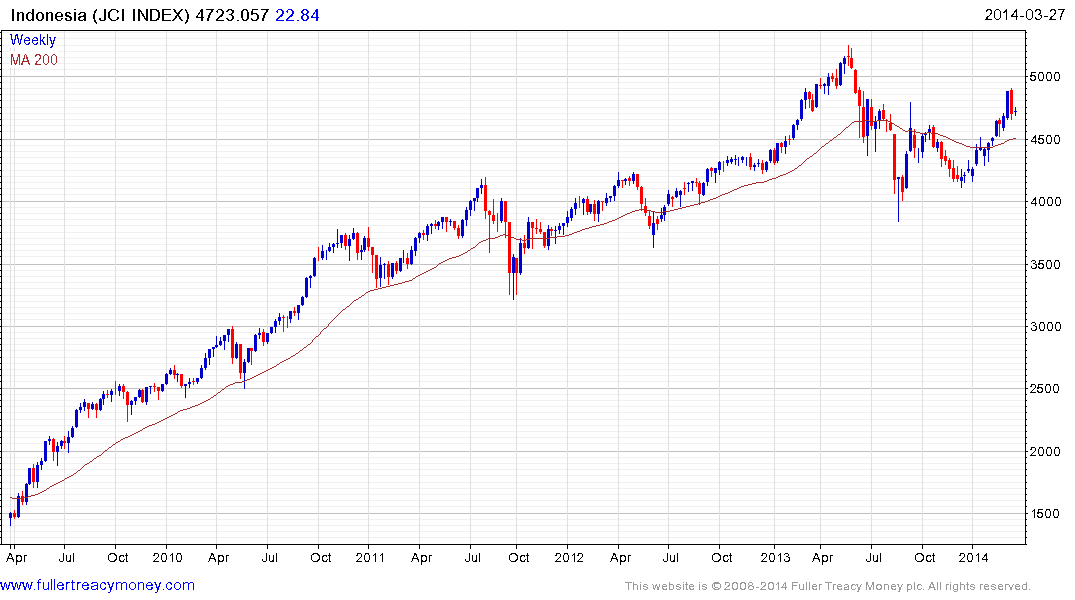 The Jakarta Composite Index was an absolute and relative outperformer from the 2008 lows but experienced a deep pullback from the May peak last year. It has stabilised mostly above 4000 and a sustained move below that level would be required to question medium-term scope for continued higher to lateral ranging.

The US Dollar has also been trending higher against the South African Rand since 2011 and retested previous peaks in January. It has since at least partially unwound the overbought condition relative to the 200-day MA but a sustained move below it will be required to signal a return to Rand strength beyond the short term. 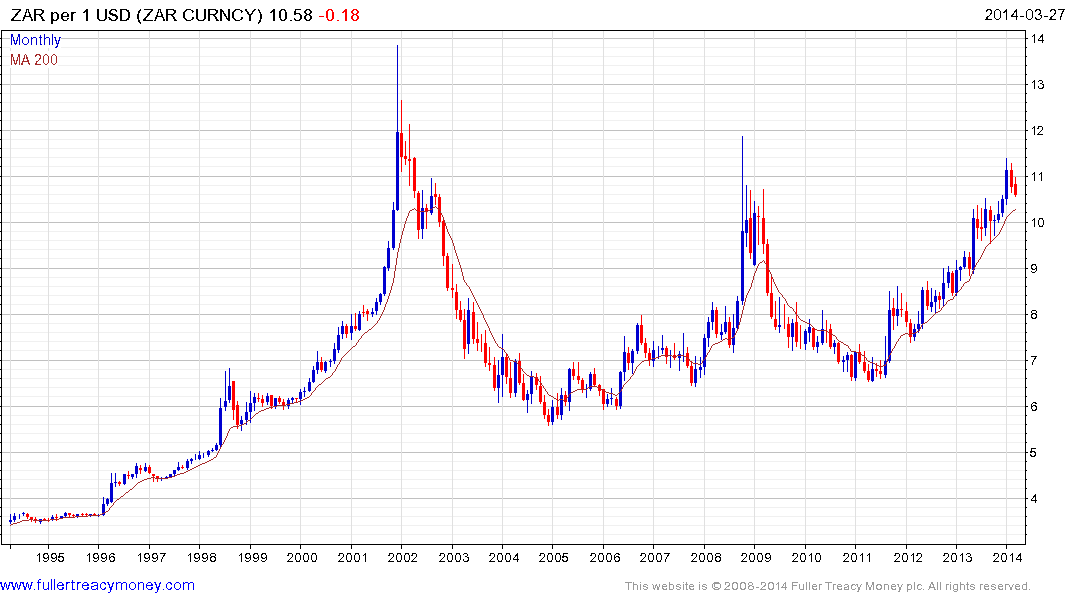 The affiliates of major international corporations represent approximately 49% of the Johannesburg All Share’s total market capitalisation with the result that the stock market is somewhat insulated from domestic issues. The Index’s performance has been helped by the weakness of the Rand and it remains in a relatively consistent uptrend. 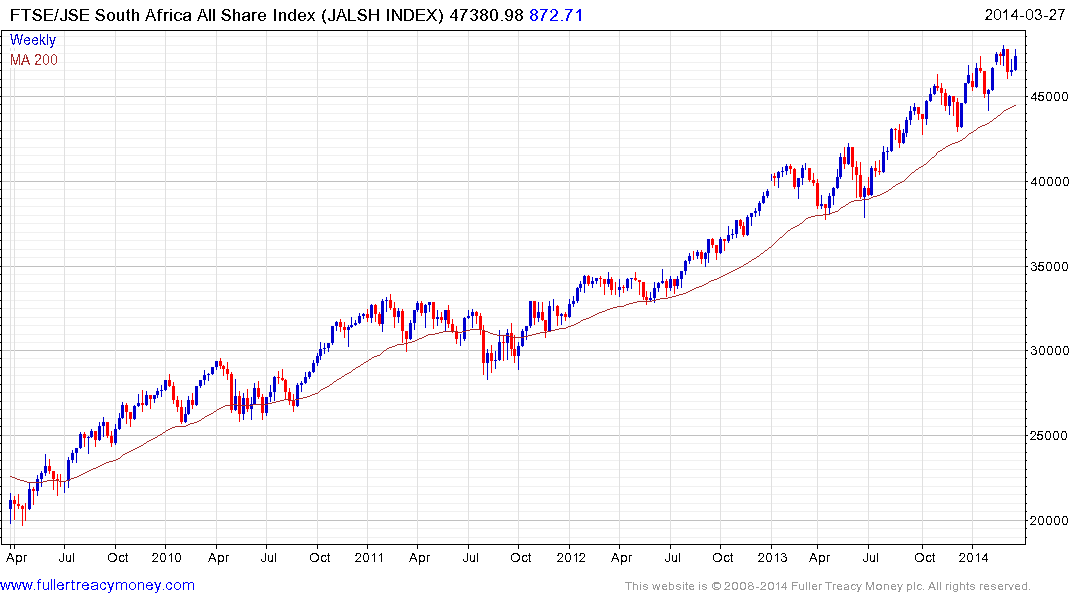 In US Dollar terms it has returned to test the upper side of a two-year range. 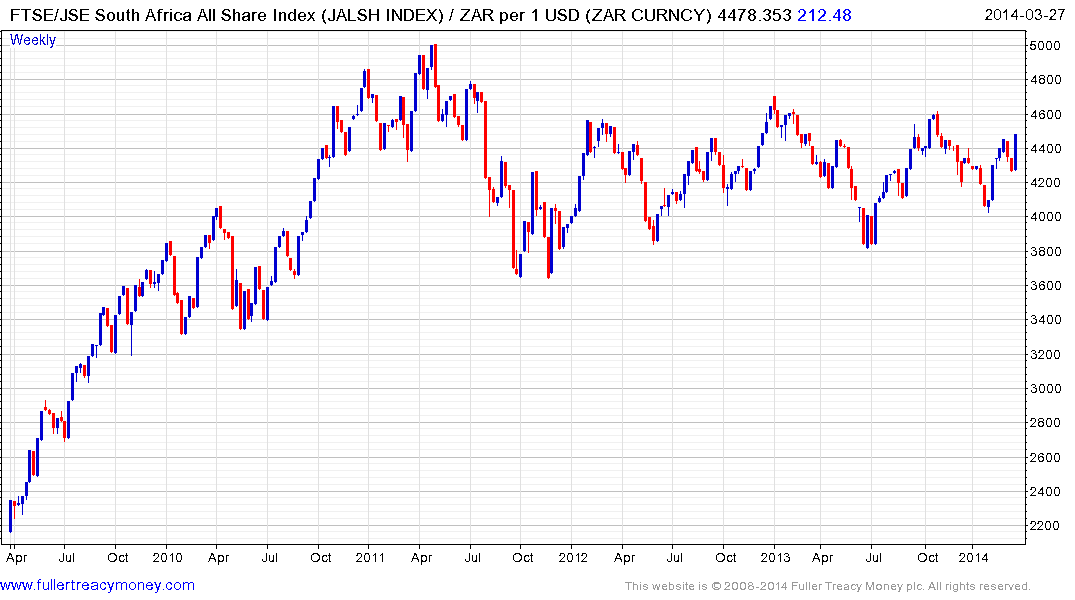 The Turkish Lira had been declining for most of 2013 but accelerated lower from December to hit a medium-term low near TRY2.4. It has since bounced and has been ranging in the region of TRY2.2. With a steep current account deficit the Bank of Turkey has been forced to raise rates in order to stabilise the currency and encourage foreign investors to return to supporting the economy. The Lira will need to hold the TRY2.28 level in order to rebuild confidence. A resolution of the corruption charges levelled at the government would also help sentiment. 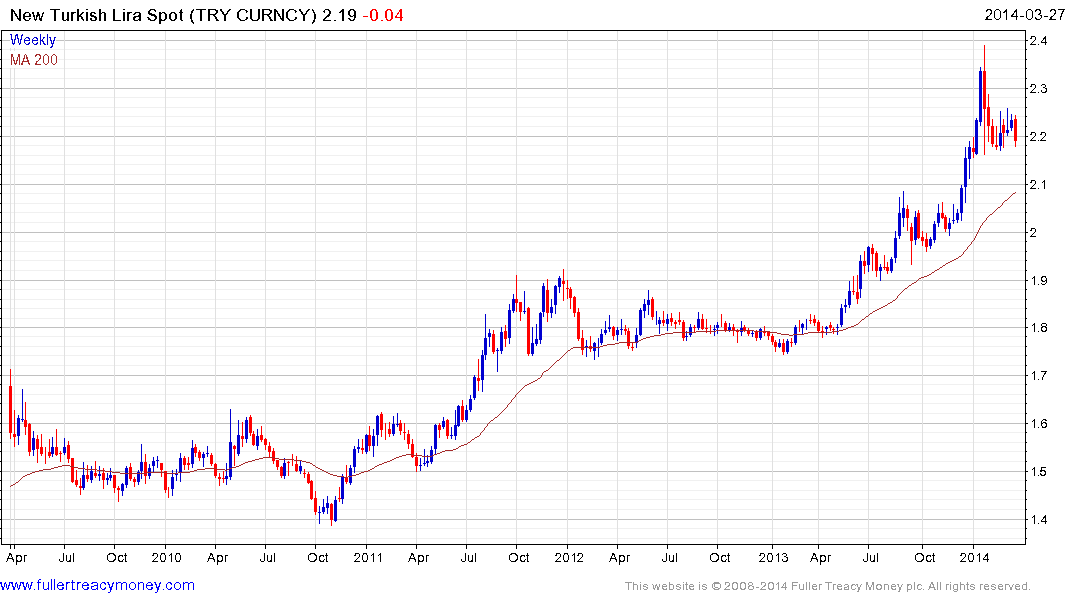 The National 100 Index has stabilised near 60,000 and a sustained move below that level would be required to question potential for some additional higher to lateral ranging. 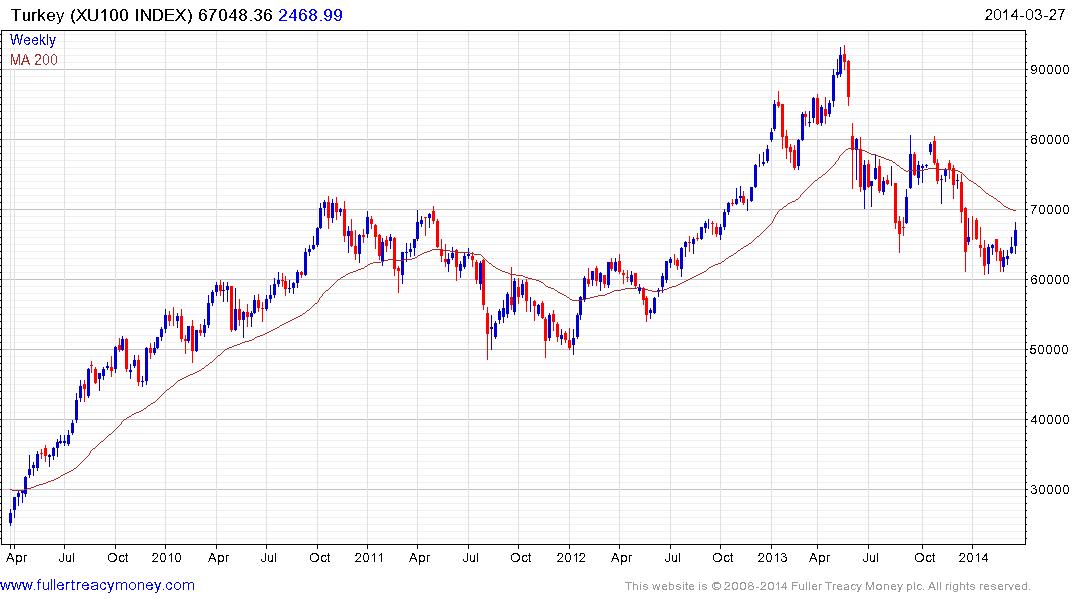 The Indian Rupee was among the first currencies to experience concerted selling pressure and as a result is further along in attempts to convince investors of official intent to stabilise it. It hit a medium-term low in August near INR69 and has since ranged in a gradual process of mean reversion. It rallied above the 200-day MA for the first time since early 2013 this week. Investors are likely to give the central bank the benefit of the doubt provided the Rupee continues to hold below INR64 against the US Dollar. 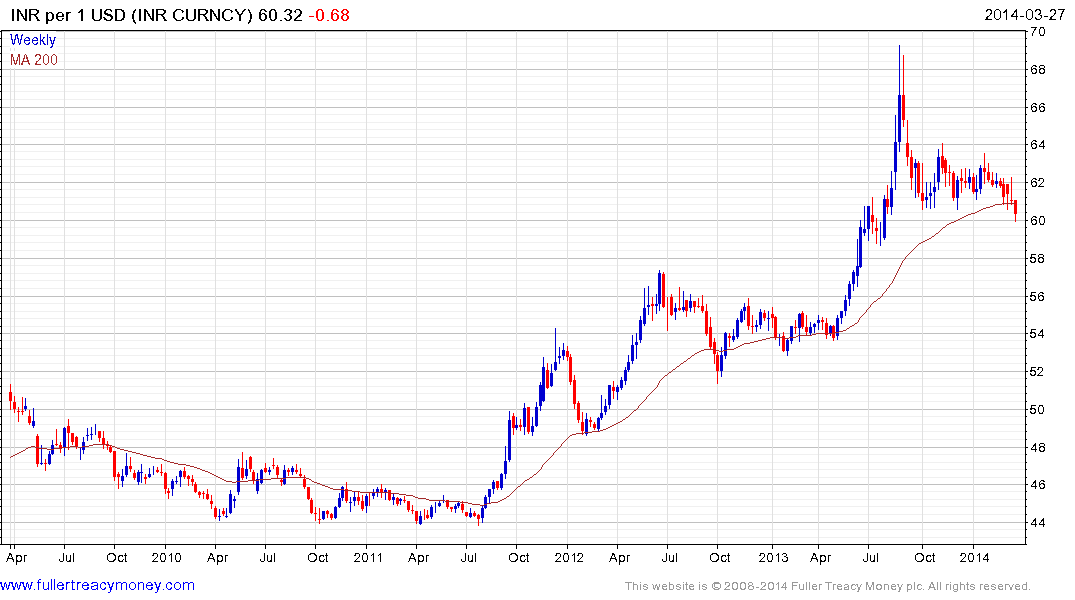 The BJP are talking up the possibility of an outright majority in the election which begins next month.  While this would be a positive outcome for the stock market, it remains to be seen whether the electorate are willing to concentrate power in the hands of one party, when they have previously favoured coalitions.

The Nifty Index has been hitting new all-time highs this week and a sustained move below the 200-day MA, currently near 6100 would be required to question medium-term scope for additional upside. 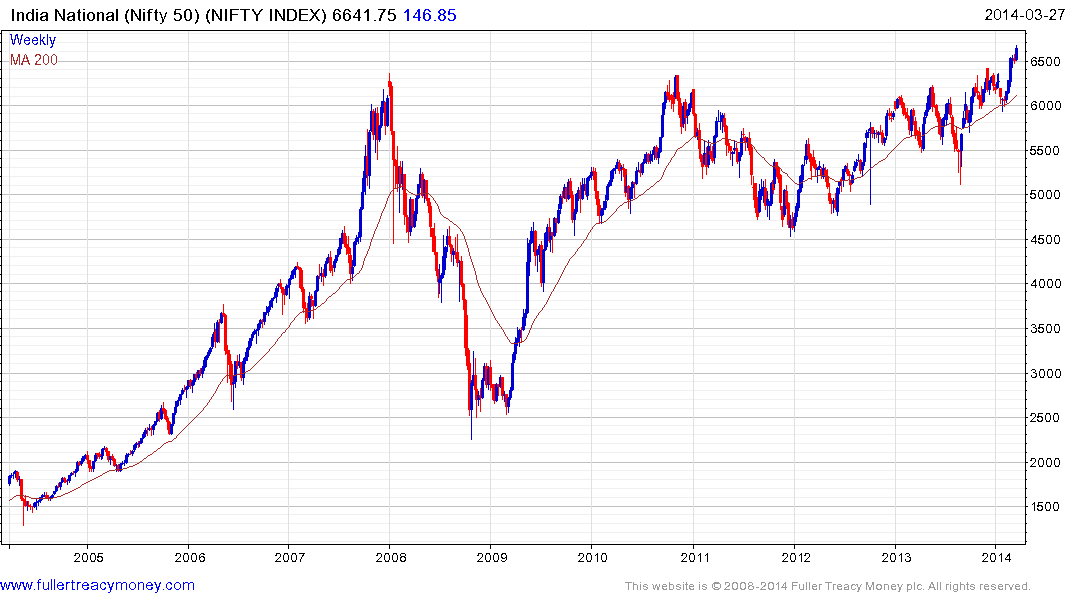 The Bombay Banks Index has also been resurgent and while overbought in the short-term, a sustained move below 12,000 would be required to question medium-term scope for a successful breakout. 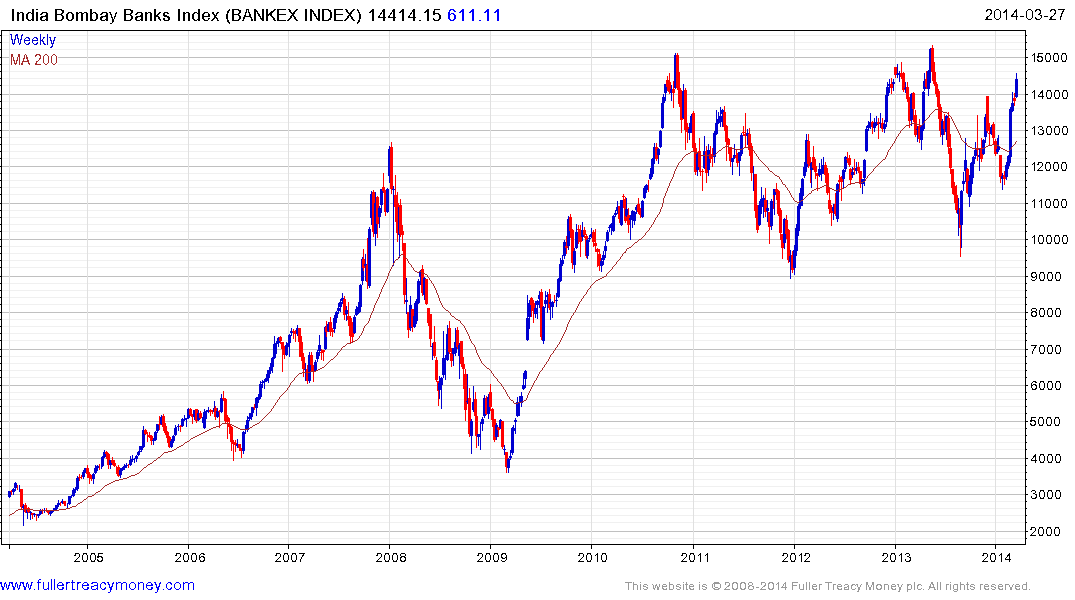 Taking the above currency charts as a whole, they all accelerated lower which forced central banks to take action to stabilise them and foster investor confidence. Provided the lows hold on the next pullback, investors are likely to begin to refocus on improved competitiveness. Nascent recoveries in stock markets would then also be viewed as more convincing. How the respective currencies perform will a key barometer of sentiment.