The Fever Has Broken, Stability is Coming
Comment of the Day

The Fever Has Broken, Stability is Coming by Eoin Treacy

AN INEPT INSURRECTION FAILED, and there will be an orderly transition of power on Jan. 20; even Trump pledged as much early this morning. He probably won’t be ousted but his legacy will be forever stained, and his sycophants — Josh Hawley, Ted Cruz, etc. — will never recover.

THE TEMPERATURE WILL LOWER SOON: For the next few days, there will be speculation about removing Trump, largely out of fear over what he may do — especially geopolitically — in his final two weeks. And there will be questions about why the Capitol Hill police were so pathetically caught off guard yesterday. But a change is coming . . .

Stoking the mob is always tempting for populists on both sides of the spectrum.

That was abundantly clear in the mass protests, looting and destruction of public property over the summer. Those protests have since abated because the organisers achieved their goal of overthrowing the Trump administration.

The big question now is whether the mob seeking to overthrow the new Democrat controlled government will be chastened by yesterday’s events. My intuition tells me they represent a significant demographic and will form a significant portion of the new opposition, regardless of whether Donald Trump is banned on Twitter/Facebook.

That points to a future of continued social upheaval but potentially a benign market outcome. Greater uncertainty increases scope for monetary and fiscal largesse. Liquidity has fuelled this bull market for the last 13 years and that is still true. 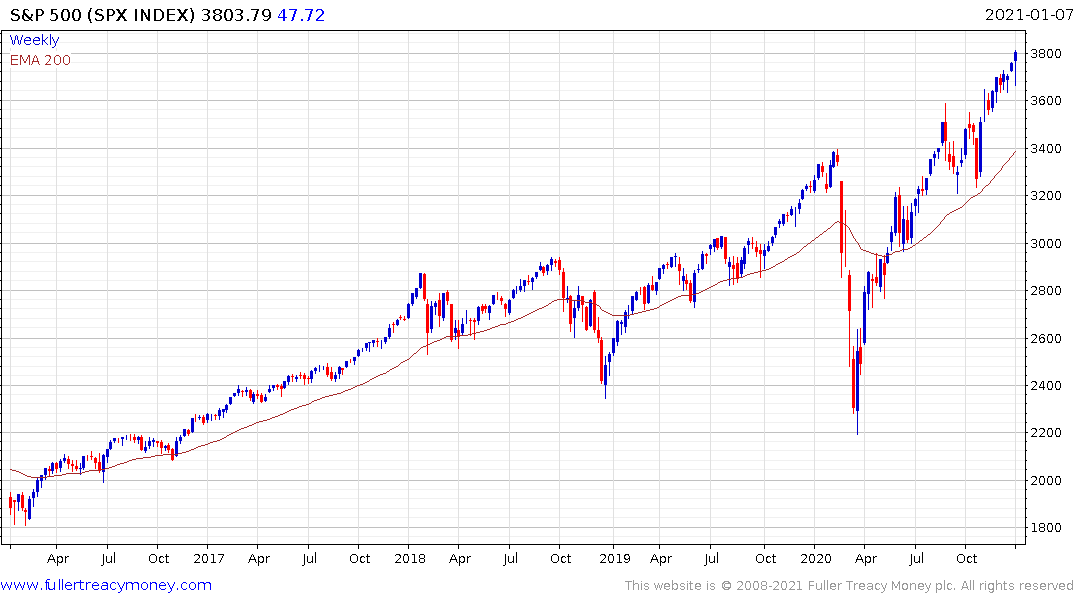 The S&P500 pushed on to another new high today to reassert the uptrend. It has shaken off the pre-Electoral College ratification downside key day reversal and a break in the sequence of higher reaction lows will be required to check momentum.