Record low junk yields, the tightest spreads since 2007 on high-grade debt, rapidly evaporating distress -- the Fed’s fingerprints are all over credit markets. Central bank purchases ended up being marginal but the psychological boost can’t be overstated, leaving spreads vulnerable to widening now it’s backing out.

“The Fed has your back” was the constant refrain from investors piling into corporate credit over the last 14 months, even after valuations overshot pre-pandemic levels and high-grade losses accumulated. The program technically only extended to the very best quality junk, but it squeezed yields all the way down to CCC, arguably keeping a lot of zombies walking.

Of course, now they’ve been used once, it’ll be tough to leave those tools sitting idle next time there’s a blowup, so some investors will keep faith. And there’s still too much cash chasing returns in an asset class that could be seen as offering relative value. But removing the Fed crutch may force buyers to look a little harder at credit fundamentals amid razor-thin valuations.

The Fed is still buying $120 billion of Treasuries and mortgages every month. That hasn’t changed and it will be a while before they begin to chip away at that rate of purchases. The decision to unwind credit holdings is timely since spreads are so tight, but it also shows some awareness of how big a step it was to buy them in the first place. Central banks do not see themselves as white knights for markets even if that is the function they fulfil in practice.

Perhaps the biggest takeaway is they had to intervene in the credit markets because the risk of a fallen angel downgrade cycle was so profound. That risk has now been pushed out at least a few years because so many high yield issuers have been afforded the opportunity to refinance at accommodative rates. 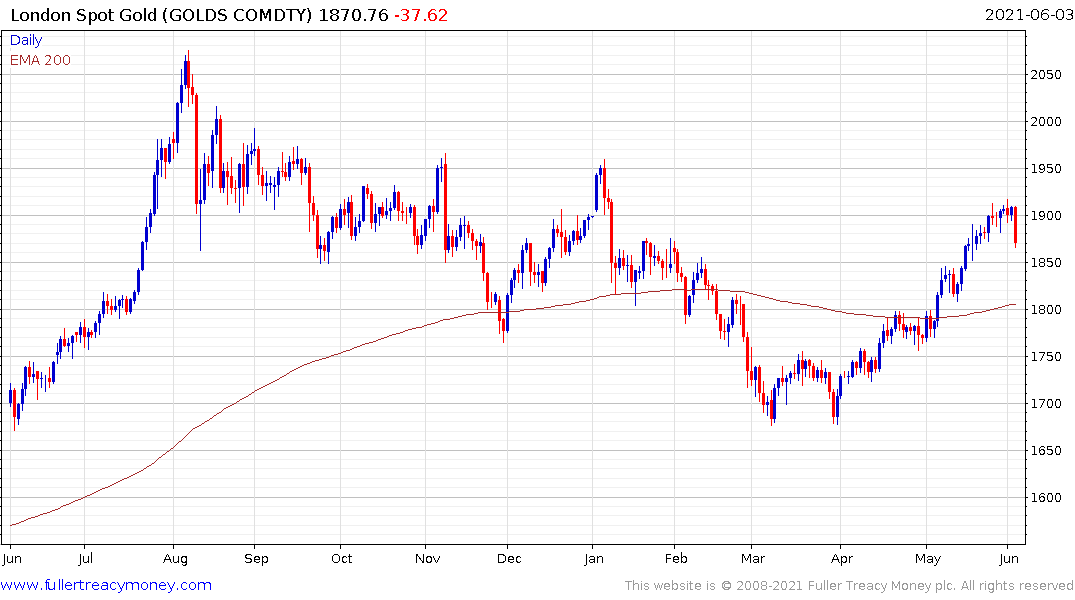 Any suggestion the pace of Dollar issuance will abate is positive for the currency and reduces demand for alternatives like gold. Gold has pulled back in a violent manner following forays above $1900 in November and January. Today’s decline is smaller than the previous downdrafts.

This is where the rubber meets the road for the rebound from the March lows. If we see a higher reaction low that would be ideal. Every rebound since August has failed and the subsequent decline has hit a new low. The size of this rebound is considerably larger than what we have seen to date in this correction so there the odds have improved that the low is in. However, a successful higher reaction low will be required to confirm that view.