The Fed Is Losing Its Grip on U.S. Interest Rates Once Again
Comment of the Day

The Fed Is Losing Its Grip on U.S. Interest Rates Once Again by Eoin Treacy

Last month, the Fed said it would buy Treasury bills to maintain a level of bank reserves at or above levels last seen two months ago.

“These actions are purely technical measures to support the effective implementation of monetary policy as we continue to learn about the appropriate level of reserves,” Powell said. Powell later told lawmakers that he thinks the Fed has contained the problem with the repo market. “I think we have it under control,” he said. “We’re prepared to continue to learn and adjust, but it’s a process and it’s one that doesn’t have implications for the economy or general public.” It appears, he added, that U.S. banking reserves need to be just under $1.5 trillion to maintain the peace.

According to some of the research I’ve seen, before the tightening of banking regulation the sector provided in the region of $150 billion in liquidity to the repo market. The removal of that pool of liquidity represents a tightening the Fed has been forced to move in to fill. However so far it has had to add $300 billion to its balance sheet to grease the market. That’s not exactly an ideal scenario.

By expanding its balance sheet to cover the repo market, the Fed is leaving itself open to unlimited liability. The repo market is also a lot larger than the Fed Funds Rate market and is more international. Therefore, the Fed’s balance sheet is now supplying liquidity to the global financial market directly whereas the pass-through mechanism was more derivative in nature in years past. 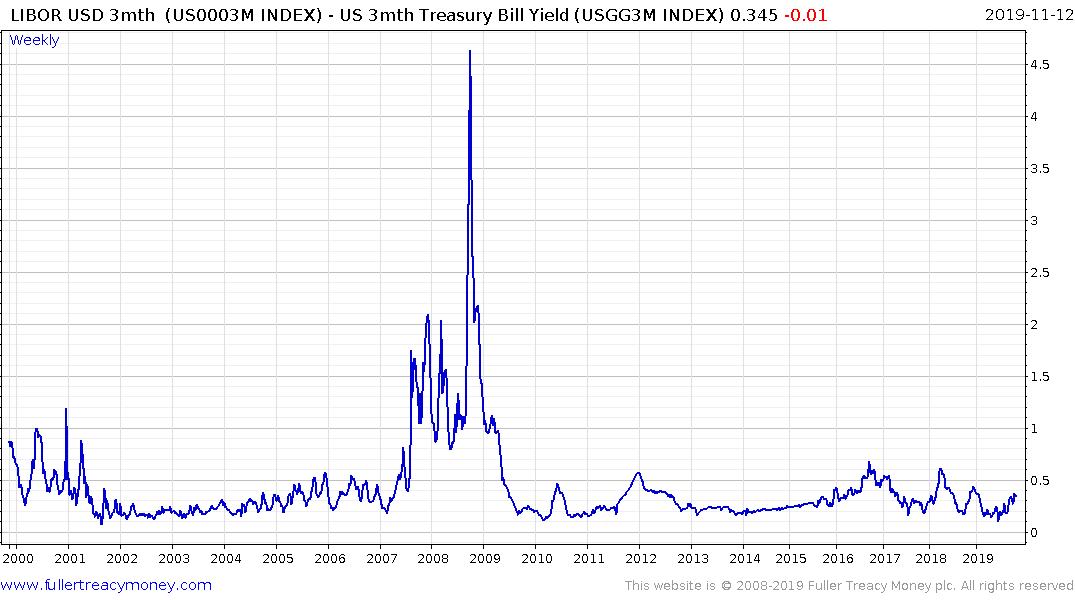 The TED spread (3-month LIBOR - 3-Treasury rates) which is a measure of stress in the financial system is still low by historical standards but it is trending higher. Breaks above 65 basis points have generally been lead indicators for financial market stress.